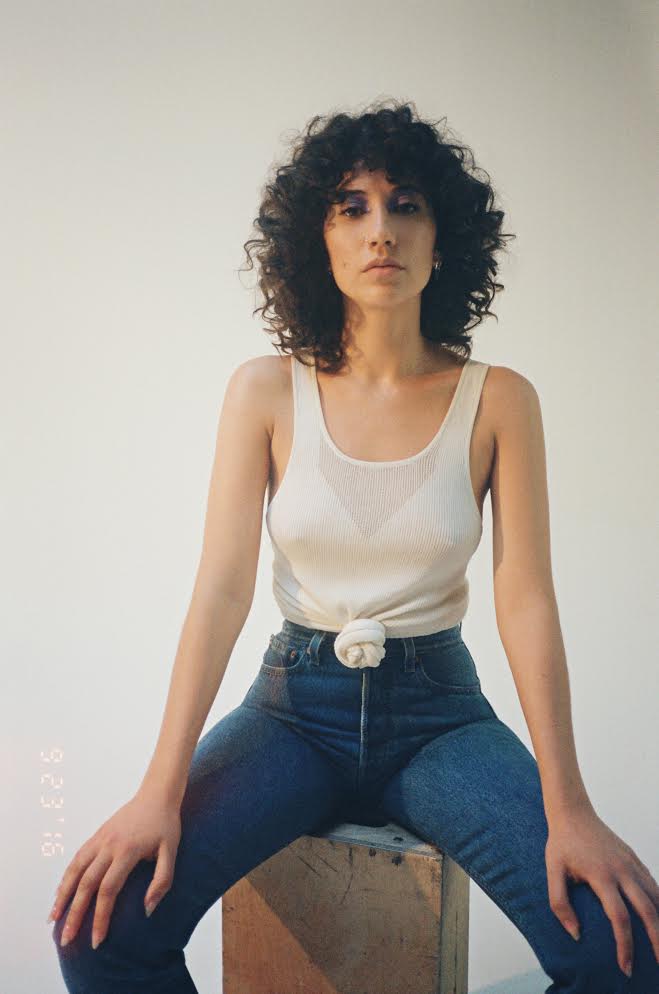 When I meet Valerie Teicher, who writes and performs her music as Tei Shi, at Lalito in New York City’s Chinatown, she’s the only customer inside. Teicher, who lives in the neighborhood, tells me the place is still fairly new and people don’t seem to know it’s there. Granted, it’s also three minutes after opening on a rainy weekday morning. It is two days before Teicher embarks on her longest tour yet, to support *Crawl Space*, her first full-length album, released on Downtown Records in March. It represents a dramatic scaling-up in ambition and complexity from her earlier releases, 2013’s *Saudade* and 2015’s *Verde*. “I feel like the EPs track my development from being completely raw and not having any expectations to, with this album, really trying to affirm myself as a serious musician.”

The album itself charts her early ambitions in music. The first half of *Crawl Space* is punctuated by tape recordings of Teicher as a little girl. She asks her father in Spanglish how to use *el microphone*. She worries that she can’t sing but hopes that she can be like Britney Spears one day. In the final tape, she declares, “I just wanted you to hear this, *EVERYBODY ELSE IN THE WORLD*. I’m a bad singer. I confess it. And I’m the hell of a bad girl.” The recordings are relics of the time right after Teicher, then nine, moved from Bogotá to Vancouver with her family. She developed the habit of capturing scenes from her life on cassette tape: singing, arguing with her sisters, and reading aloud from educational tracts concerning the Canadian government.

Teicher describes music as “all I ever wanted to do when I was young,” but, as she approached adulthood, she doubted herself. “I remember being afraid to admit to anyone that that’s what I wanted. I felt like it was a silly, naive thing to want.” She ended up studying at Berklee College of Music after an unhappy year as a psychology major at McGill University. After graduating and relocating to New York, she didn’t know what to expect when she tentatively released her first songs as Tei Shi online: “M&Ms” and “Nevermind the End.” The positive feedback was immediate and immense. Her first two EPs, backed by well-received live shows and a (9) of Beyoncé’s “No Angel,” garnered her a spot on the 2016 Coachella line-up, a career landmark that came sooner than Teicher anticipated. Her blockbuster track (6) even inspired fellow Canadian Grimes to tweet that “Bassically by @TeiShi must be one of the best songs of 2050, and she is playing a demon in my next (7).”

“Bassically” stands testament to that emerging phase of Teicher’s career, particularly its frustrations. Her first instrument was her voice, which, despite her range, she often wields lightly. The lyrics, though, can be quietly cutting, sarcastically acquiescent, and ambivalent in their desire. They might be paired with a surprisingly hard-hitting instrumental. “Baby, I’ll behave, if you let me stay,” she drawls cynically over the driving bass beat. “Please don’t think that I’m begging you for love.” Teicher is hesitant to say her songs are “about” one thing. But she acknowledges that “Bassically” came out of a time when she was feeling frustrated by certain relationships in her life and the double standards for female artists in the music industry. “I felt that there were relationships around me that became strained, for the most part, with men, who couldn’t really handle the fact that I was succeeding at something.”

When I ask Teicher about her industry frustrations, she tells me they are manifold. The artistry of male musicians is taken for granted and gives these men free rein to behave badly. Whereas, for female musicians, “there really is a sense that you have to tick all of the boxes for people to not assume that you’re just the face.” She adds that “there’s more laziness with the words that are used” to describe women’s music. Citing (8), Teicher elaborates on the readiness of critics to label music by ethnically ambiguous women as R&B: “I think the music that I make is a mix of a lot of things, and some of it is R&B-leaning and some of it is not at all.” In the early days of her career, she felt “really frustrated” when her music was simply labeled “‘R&B,’ ‘sultry,’ ‘sensual,’ like that’s all.” But “at this point, I take all that stuff less seriously than I used to. It doesn’t really matter what people say or how they label my music, because I’m just going to keep doing what I’m doing.”

*Crawl Space* escalates Teicher’s ambition for her music to evade definition. Now signed to a label, with all its resources available to her, she knew that she wanted to bring in live musicians and to spend time experimenting, producing, and becoming self-sufficient as an artist (her early music was electronic and recorded on a laptop). Where each of her EPs were produced quickly with similar musical elements, *Crawl Space* is intentionally disjunctive. Her first track-list decision was to place (1) the song she was “most proud of creatively,” next to (2) a track so straightforwardly pop that she considered giving it to another artist.

The album also contains Tei Shi’s Spanish-language debut, “Como Si,” a spare, percussive composition that blooms when performed live. Teicher tells me she hadn’t thought too much about the meaning of the gesture. But she notes the growing wave of artists, like former Berklee classmates (3) and (4), who were raised between cultures and who are “showing one another that it’s cool to put both parts of yourself out there.” Having once been the only Latinx in her high school, she’s glad to think that she might be normalizing the immigrant-kid experience for others, as well as expanding the minds of those who conceive of Latin music as “one genre.”

Teicher considers herself preoccupied with the past. “I feel like I have a lot of nostalgia in me,” she says, a tendency she attributes to the happiness of her childhood. “I reference that period of life a lot.” On (5) *Crawl Space*’s first single, Teicher laments the relentlessness of time, imploring a lover to fight for their relationship even as an overlaid vocal declares, “Time is up, time is up, time is up.” The instrumental is locomotive, but there’s nowhere to go: the effect is ingeniously claustrophobic. The song, much like the album itself, dramatizes a confrontation with fear — the album title came from Teicher’s childhood fear of the dark.

As a kid, happiness notwithstanding, she had “a lot of extreme emotions.” For a few years after her family moved, she was gripped by a dread of the dark that kept her from sleeping, an anxiety that she treated in secret by forcing herself to sit in the crawl space of their house for one minute every night. It seemed like an instructive memory when Teicher came to record her first album — an orientation toward the past became a way to conceive of the future. For Teicher, *Crawl Space* represents a reckoning with her anxieties as a musician: “The album was the problem, but it was also the solution.” It more than fulfills a promise from 2015’s (10): “I’ll be like the trees and I’ll grow while no one’s watching — and I’ll unravel you, mister.”

*Yen Pham is a writer based in Oxford and London. You can find her work (11).*