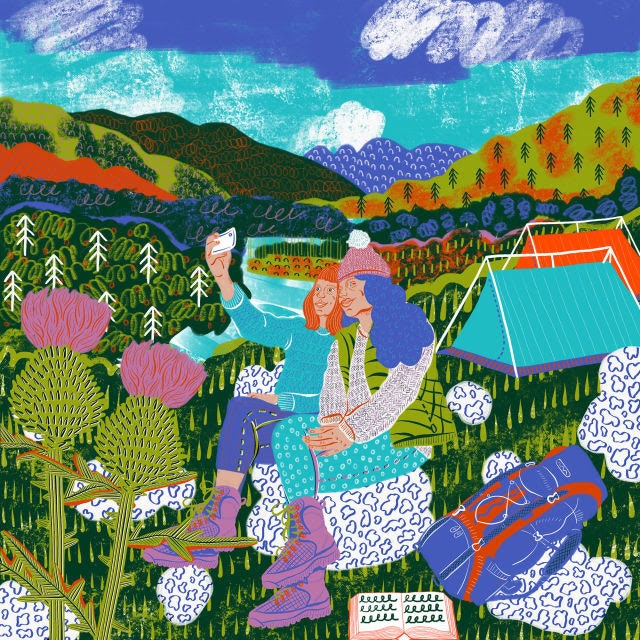 I have had only one crush at first sight. It was 2013 and I was in Paris to watch my husband run his first marathon. I was hanging out with friends at a hole-in-the-wall wine bar talking about my day. Behind me, I heard, in a lovely Scottish brogue, “Excuse me, you said you went to Shakespeare and Company? So did I! What did you buy? I got *The Federalist Papers*.” I turned around to see a smiling woman about my age, with a blonde bob and swollen feet from running the marathon.

Little did she know hearing a Scot talk about a foundational primary source document from American history was the way to my heart. Her name was Zaineb. I insisted we become friends on the spot. I talked with her that night, delighting in finding out she was also a journalist and charmed by her dry humor that came out about everything from using Tinder in Paris to how she had looked hobbling around the Louvre earlier in the day. She finally begged off, still exhausted from the marathon she had run the day before. I even tried to organize meeting for breakfast before flying home, but between the wine and my bad French, I didn’t give Zaineb the name of the right café.

Zaineb lived in Abu Dhabi and I lived in Brooklyn, so our friendship for the first few years was mostly Internet-based, plus dinner that one time she was in New York for a wedding. It was frustrating to have met someone I liked immediately and be too far away to get to know her well. Typically my friends have to cajole me into leaving the house, where I’d otherwise spend hours or days happily alone. I found myself wanting to make that effort for Zaineb, but I felt offering to fly to Abu Dhabi seemed a bit presumptuous.

Zaineb took care of that. Last year, she emailed asking if I wanted to hike the West Highland Way. She wrote, “It’s Scotland’s version of the Appalachian Trail, but shorter and most likely wetter, and definitely with more whisky.”

I had mostly traveled with my husband to urban destinations over the last few years, but I was ready to see some countryside and get to know Zaineb. I was nervous about my ability to hike almost 100 miles over five days, and more than a little nervous to spend it with Zaineb, on an extended first friend date. If we ended up not having anything to talk about, or worse, didn’t actually like each other, I had no way to make an exit. My hiking boots were new and not broken in as much as I would have liked. Also, my camping experience had always been at campsites, so figuring out how to take a shit outside was also a point of concern. I started obsessing over every possible combination of problems: emotional, physical, and metaphysical.

It wouldn’t just be the two of us, which eased some of my nerves. Maryam, Zaineb’s younger sister, and two of her friends would also join our hike. The first day was an unusual Scottish day — it didn’t rain and was warm enough to take off our jackets. We took breaks to snack and take photos with the huge, long-haired Highland cows along the way. We stopped early, after covering only thirteen of the twenty miles planned, thinking it would be easy to make up the mileage the next day. I popped my first blister, situated on the bottom of my right foot. Talking with Zaineb through the hours of walking was easy. We had plenty to chat about, but I found even when we were hiking in silence I was at ease.

The second day, I learned the joys of trying to keep things dry while breaking down camp in the rain. Within the first two miles, we were hiking up a mountain, and the rest of the morning and afternoon had us going up and down hills, still in the rain. We didn’t stop for lunch until after 4 p.m., demoralized, tired, and soaked. We called a bag courier service to ferry our heavy packs from stop to stop. Even without the weight, we walked until 9 p.m., covering 25 miles.

That evening, I learned the joys of trying to keep things dry while setting up camp in the rain. The bandages that Amazon reviewers had assured me would work well for hiking had not helped, and my blister had split a further painful half-inch.

Shivering in my sleeping bag with my foot throbbing, I was sure I couldn’t go on. I was going to lose face in front of Zaineb, who hadn’t complained once.

When I woke up the next morning, it was still raining, so like I often do on long runs, I made a deal with myself. I’d hike until lunch, and if I was still feeling awful, I’d call it quits. I just had to get to the afternoon, a goal post in the foreseeable distance. One of her friends gave me a better bandage, and I dressed my blister the best I could.

By late morning, the sky had cleared, and I was running ahead, laughing as I jumped over obstacles and using my hands to drink from streams. *I could do this.* At the small restaurant where we stopped for lunch, I ordered the haggis, a classic Scottish dish made of sheep innards and spices. It was delicious, and I felt it even fortified me to continue the hike.

I didn’t just continue, I triumphed: I became the taskmaster to ensure we would reach the next campsite early, so we could be done by dinnertime. Day four was “short” — only 13 miles of hiking in eight hours. We set up camp early enough to enjoy a double rainbow. On day five, we walked through the biggest uninhabited forest in the United Kingdom. It was drizzling, but it was beautiful and contemplatively silent, so I didn’t mind.

Through the hours and hours of walking, I would fall back and talk with Zaineb, who was keeping pace with her lagging friend. We would discuss the walk, family, friends, the television show *Outlander*, a historical drama set in 1740s Scotland, which I had told myself I had to watch in preparation for the trip. Since we are both journalists, we talked about stories we were working on and ones we would like to do. She teased me that I liked her sister better, walking out ahead with Maryam for hours. I promised myself to slow down and walk more with Zaineb.

We set up at a campground near a pub connected to an ice-wall climbing gym on our last night. One of the instructors, perhaps bored or most probably allured by a group of five young women, came over to talk to us. He introduced himself as “Magnus from Michigan” and asked us about our hike. “Was it type-one fun or type-two fun?”

Type-one fun, he explained, was “something you do that’s immediately great, like eating ice cream or getting a back scratch,” while type-two fun is something that’s “perhaps stressful at the time but fun in retrospect,” like skydiving, a family reunion, or six days of hiking through rain with an increasingly growing blister. We looked at each other. “A little bit of both.”

A few hours later, we reached Fort William, the town that marked the end of the West Highland Way. The 96-mile hiked ended up being closer to 125 miles, once we factored in some wrong turns and an ill-fated detour. We considered capping it off with climbing Mount Nevis, a usual addition to the hike, but by that point there was a blister in my blister, and we already felt accomplished. The train ride through the countryside that we took days to walk through got us back to Glasgow in a few hours.

We spent the next couple of days recuperating, eating, and staying off our feet. We ventured out for Zaineb and Maryam to show me Glasgow. We watched *Pitch Perfect 2*, which we did not like, before watching *Zoolander*, which had us laughing at all the same jokes. I went with Zaineb, who has alopecia, to pick up her new wigs. I got both sisters to try bubble tea from a pop-up market in downtown Glasgow that ended up being terrible. I promised to get them a better one next time they were in New York.

People move across cities and countries for romantic relationships, but with most long-distance friendships, you just put in the work from afar. There is ego involved with choosing a friend whom you deem important enough to your own happiness that you are willing to put in more effort than usual. When you find someone you like, who likes you and lets you be you without judgment, you are coaxed into acknowledging your own self-worth.

The West Highland Way trip cemented my friendship with Zaineb as someone who’s worth the effort of keeping a long-distance friendship with. Since the trip, we have been as inseparable as two people who live nearly 7,000 miles apart can be. At the end of 2015, I stopped by Abu Dhabi before a temporary move to Singapore. Last June, we went to Sri Lanka with my husband, taking trains throughout the country and going on yet more hikes. Next summer, we are planning an even longer hike in Europe. When I stayed with her in Abu Dhabi, Zaineb guiltily pointed out her copy of The Federalist Papers, a book she said she had not gotten around to reading yet.

*Jackie Snow is a multimedia journalist based in DC who has read only parts of The Federalist Papers.*