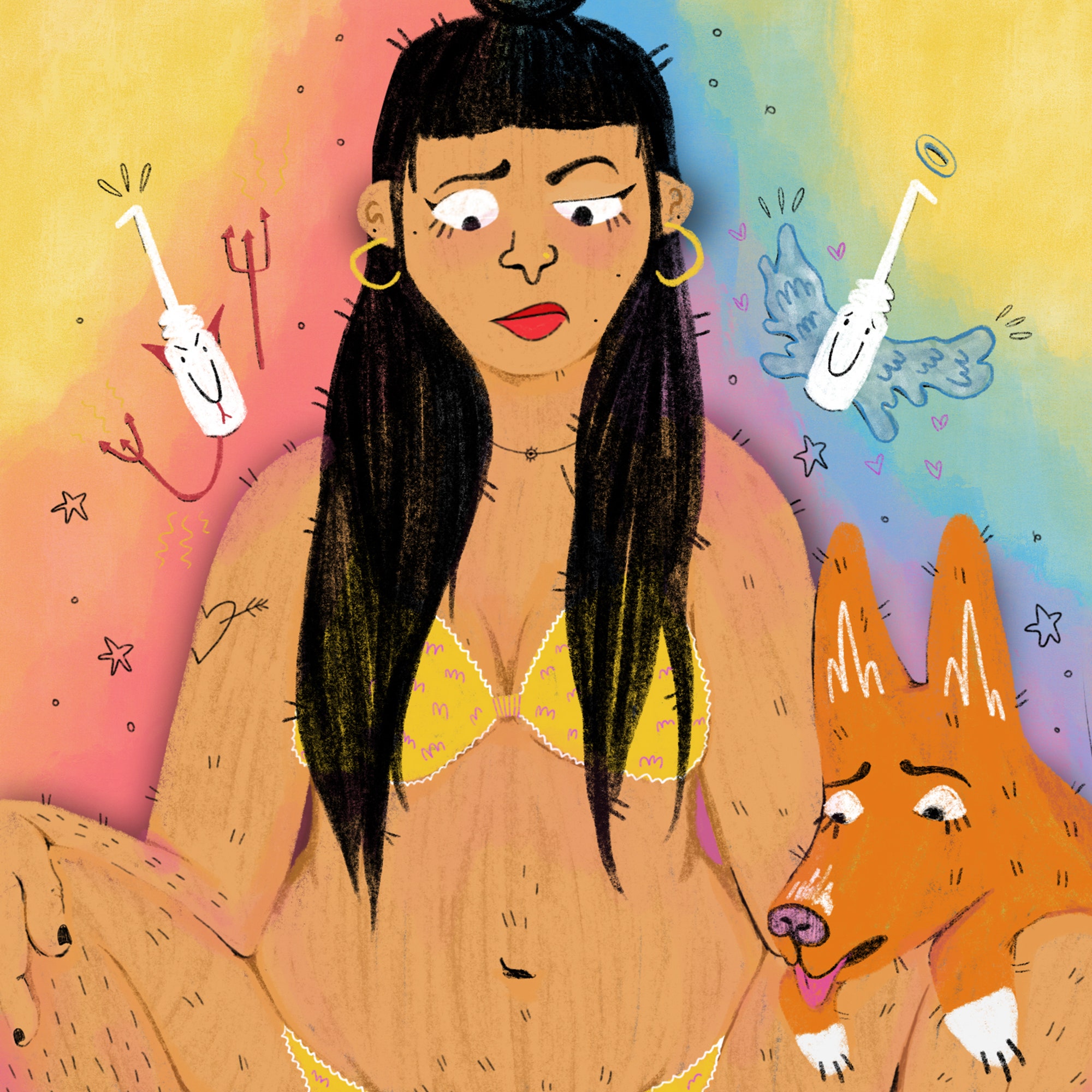 When I brought home my new puppy a year ago, I quickly discovered that she was drawn to one thing more than all other things. She was a crotch junkie. Being constantly reminded that between my legs there was an odor, something potent enough to attract furry animals, brought up both the insecurity and the fascination I’ve had about vaginal scents over the years. I wanted to know the role, if any, that vag scent played in my life.

To find out, I contacted Tiffanie Nelson, a vaginal-secretion expert and crotch genius. She is currently a research fellow at the Geelong Centre for Emerging Infectious Diseases and has spent many years investigating vaginal-tract microbiota. “What makes us smell?” I asked Nelson. She deals exclusively with vaginas, so I didn’t even have to specify which body part I was talking about.

“Hold up a moment,” she said. She explained that we had to start a bit farther back. She said that our vaginal scent is closely linked with the billions of animals that couch-surf down there. A healthy vagina is teeming with bacteria, the majority of which are lactobacilli — the same kind of bugs we use to make sauerkraut and yogurt. “They perform the same function as they do when we ferment foods,” she said, “but instead, they do it in vaginas.”

She explained that our vaginas are like an all-you-can-eat buffet for our bacteria. Our vaginal skin constantly excretes sugars, and the bacteria chow down, turning the sugars into lactic acid.

While we supply the lactobacilli with food and a place to live, we depend on their lactic acid to protect us — the acidic environment shields our crotch from the colonization of undesirable bacteria. Evil bacteria, entering a properly acidic environment, would meet a similar end to an astronaut who went to the moon without a space suit.

Though Nelson isn’t interested in normal vaginal scents, she said that when our vaginas are balanced, meaning a pH of 3.5 to 4.5 (within the range of apples and dill pickles), we have an “everyday vaginal odor.”

To find out what “everyday vaginal odor” meant, I interviewed many women, but most had trouble describing their scent to me. At least four women paused, looked up toward the ceiling, and then said something along the lines of, “I don’t have the words.”

The odor is different for everyone and changes throughout our cycles, but it’s the kind that those douching companies would have us believe leaves us with that “not-so-fresh feeling.”

|||Gross Anatomy: Dispatches from the Front (and Back) by Mara Altman|||

In 1832, an American physician named Charles Knowlton began promoting his own douching mixture as a form of birth control. The douche was a water-based solution that women spritzed up their canal after sex; it included salt, vinegar, liquid chloride, zinc sulfite, and aluminum potassium sulfite. Clearly, Knowlton just dumped leftover lab chemicals into a vagina.

In 1873, Congress got uptight and passed the Comstock Law, making it illegal to use US mail to disseminate any information or paraphernalia regarding “erotica, contraceptives, abortifacients, or sex toys.”

Douching companies, looking for a loophole in the new law, found a sneaky way around censorship. They began to market birth control by rebranding it under a new label: “feminine hygiene.”

In *Devices and Desires: A History of Contraceptives in America*, Andrea Tone explains that, though douche executives could no longer claim that their products had contraceptive value, they implied it by using ambiguous language in their advertisements.

The ads freaked out young, fertile ladies, with headlines like “No Wonder Many Wives Fade Quickly With This Recurrent Fear,” “Can a Married Woman Ever Feel Safe?,” and “The Fear That ‘Blights’ Romance and Ages Women Prematurely.” It was pre-Internet clickbait. If I didn’t know the context, I would think these were teasers for a horror film about uterus-eating goblins.

In the mid-twentieth century, Lysol became the leading pregnancy-preventive douche. When we use Lysol to scrub the bathroom floors today, we often wear gloves, but back in the Comstock days, women put the mixture straight up their vaginas. Lysol ads claimed to be good on “sensitive female tissues,” but they also urged people to use the same antiseptic liquid as a gargle, nasal spray, household cleaner, and dressing for burns.

“After disinfecting themselves, women could use Lysol to clean the garbage pail and toilet bowl,” Tone wrote.

A 1933 study conducted at Newark’s Maternal Health Center found that 250 out of 507 women became pregnant despite using the Lysol douche. When I learned that women still got pregnant while using that stuff, I had much more respect for sperm.

The douche, finally, was deemed a horrible and useless form of birth control — yet it still didn’t go away, because the douche, it turns out, is like the villain who doesn’t die in a superhero movie. When other, superior contraceptive methods, such as the pill, came onto the market, douche advertisements began to shift — touting them instead as a product with no other purpose than to make our crotches not actually smell like crotches anymore.

Douches, in other words, pivoted into a new market, focusing on the noblest of misogynistic causes: to make women feel self-conscious and stinky. Here is a nice sampling of ads from the era: “Unfortunately, the trickiest deodorant problem a girl has *isn’t* under her pretty little arms.” “Why does she spend the evenings alone?” “The world’s costliest perfumes are worthless — unless you’re sure of your own natural fragrance.” Then there were the notorious Massengill commercials that depicted mother-daughter walks on the beach — the duo look out at the briny ocean, full of fish, while they claim not to feel quite right in the groin. The douching companies waged a crotchtacular smear campaign, and it seems, to some extent, to have worked. In less than a century, vaginas went from fragrant to not the right kind of fragrant.

Douching fell out of favor when researchers discovered that the concoctions wreak havoc on our vaginal health, yet the Centers for Disease Control’s National Survey of Family Growth found that, among women ages 15 to 44 in the United States, about one in five still douches today. The practice is more common among African-American and Latina women.

Irene Raju-Garcia, a nurse who works predominantly with Latina women in New York City and is half Puerto Rican herself, explained that the women she encounters douche because it’s ingrained in their culture. “Sex is big and important,” she told me, “and women are raised to think that, in order to keep a husband, they have to not only look good physically, but they also can’t have any smell other than perfume, flowers, or so forth.” Many women come to see her when they have the slightest bit of discharge, or even when they detect their own natural scents. “They can’t wrap their minds around the idea that it’s totally normal,” she explained.

Sometimes you can’t truly understand what you have until you don’t have it anymore. In that spirit, I decided to do an experiment. I know douching is horrible for you — you are committing genocide against your unassuming bacterial allies — but it seemed like the only way to understand the role that vaginal odors play in modern daily life. Would my husband and dog change their behaviors if I didn’t smell like vagina anymore? Would my dog think I was a stranger? Would my husband even notice?

I told Dr. Jenny Hackforth-Jones, an OB-GYN, that I was going to douche. I wanted to get her read on how dangerous it was. “Nooooo, don’t do it!” she said. “You can buy it, take the stuff out of the box, and look at it, but don’t do it.”

“You’ll get horrific vaginosis!” she warned.

I told her that I had to take the risk. This was what I could do for humankind. Some people save the whales. I douche, in order to contribute to the comprehension of vag smells.

Douching was way easier than I thought it would be. Douche companies make it simple by attaching a nozzle to a disposable transparent bottle preloaded with the liquid. The directions said that the liquid should “flow freely out of vagina.” I wanted to hate every part of this backward practice, but the sensation — drinking an ice-cold beverage from the wrong end — wasn’t entirely loathsome.

I toweled off, stepped out of the tub, and immediately tried to sniff myself, which is always complicated because, well, ribs. I was concerned about how the perfume would mix with my natural odors. After a substantial amount of time spent contorting, I still didn’t catch a whiff. And after a few hours, I resolved that my smell — rather than transforming — had actually been canceled out. Oddly, I smelled like nothing at all.

Over the next few days, I found out how important vaginal scent can be. Back when I talked to Dr. Jenny, she told me that when women reach menopause, their vaginal smell changes because of hormonal shifts. “They are always surprised,” she said, “that their scent is something they miss.”

At the time, that reaction seemed incomprehensible, but after a few days I understood. With my eyes, I can see my reflection in the mirror, but my scent is another kind of self-portrait. When reflected by a nose, it’s just as vivid and familiar. Without my normal scent — a thing I didn’t even realize I registered on a daily basis — a part of me felt foreign.

I thought my odor would have the most profound impact on my husband and my dog (neither of whom seemed to notice at all), but it was on me — I actually missed myself.

*Mara Altman enjoys writing about issues that embarrass her (e.g., chin hair), because she has found that putting shame on the page diffuses the stigma, leaving her with a sense of empowerment and freedom. She lives in San Diego with quite a few other hairy beings.*