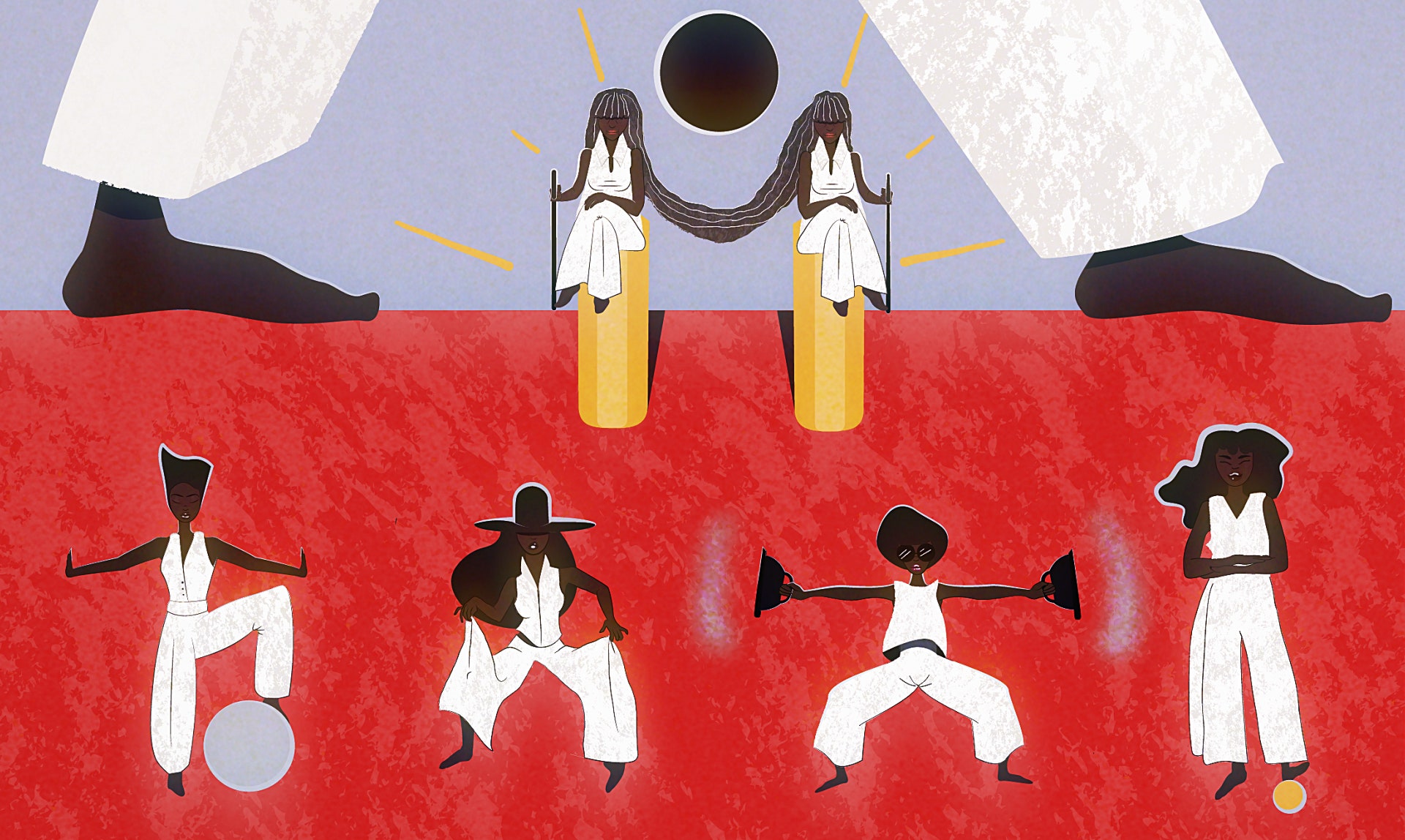 There’s a summer uniform that I associate with all the black people I know over 40 years old. For the men, it’s two-piece suits, loose pants, and guayabera shirts with chunky black sandals. Where I grew up, in Detroit, they might also add alligator loafers, topping the look off with a gold chain or two and a straw hat. For the women, it’s tunics with loose pants or caftan-like dresses and sensible but stylish heels. The common denominator here is linen. The lightweight, breathable fabric is a practical and obvious choice for warmer months, yet there’s a distinction in the way that black people wear it; it’s not just a means to keep the breeze flowing in the summer heat, it’s a *look.* Always starch-pressed. Always accompanied by a two-step, probably to some Frankie Beverly and Maze or Charlie Wilson. The fabric is usually white or beige, and sometimes pastel, lime green, orange, or tan. The color white looks radiant on dark skin, which means that a black person in white linen immediately stands out and has a look of regality. The look embodies an entire generation and their love for going out (usually to Essence Fest, a summer concert, cookouts, or an all-white party) and, as my grandmother would say, their penchant for looking “sharp.”

“I don’t think there’s a name for it. I guess beyond how my dad dresses, I associate it with Steve Harvey, Tom Joyner, or even someone like Drake’s father, Dennis Graham,” says Jonathan Michael Square, a historian specializing in fashion and visuals from the African Diaspora and a Harvard University professor. “It’s just an auntie, uncle, probably going to Essence Music Festival. It’s one of the many versions of African American dapperness.”

My grandmother on my dad’s side, and her best friend, known to me as Auntie Denise, both agree, and they even told me that my dad adopted the same linen uniform after seeing his uncles wearing it while he was growing up. Over the phone, they reminisce about going to Hudson’s (now Macy’s) and picking out their all-linen outfits ahead of whatever artist was coming to Detroit to perform that weekend.

“You know who was our favorite? Frankie Beverly and Maze, the O’Jays, and the Whispers,” says my grandmother. “When they was in town, oh, shoot, the whole city was gonna get sharp. You’d go shopping someplace, and they’d ran out of whatever you wanted to buy.”

“Detroit would get ready for them,” Auntie Denise (aka Denise Pratt) chimes in. “And you hear people all over the world — if they know anything about Detroit, they would tell you that Detroit is known for its cars and dressing.”

“And what were some of your favorite linen outfits?” I ask them.

“I can’t remember. But, Tahirah, with your aunt, whatever outfit we had on, we had a ball. We just had a ball,” my grandmother says.

“And we were cute. You know how you see a lot of people with the linen on, T-shirts and stuff, we don’t do that. We’re not so casual,” Auntie Denise says.

Like many things in life — braiding hair or wearing church hats and Sunday’s Best — black people have a knack for giving practical, everyday things more style, a twist of their own, a sense of community. The way we wear linen is no different.

While the fabric is prone to wrinkling, black people prefer their linen starch-pressed with pleats down the front of the trousers. And while the fabric is also a signifier of leisurely downtime, black people wear linen as an option for dressing up for special occasions. “The black community has such a long history of being totally immersed in style and having a great respect for style within the culture,” says Constance White, fashion editor and author of *How to Slay*. “Style is always important in the black community. And there are all these ritualistic ways that style is used, from how you dress in church to how you dress when you’re traveling to how you dress if you’re going to a barbecue.”

And linen has become a big part of those rituals within the black community. “The linen shirt in the black community — like the guayabera in Caribbean and Latin American communities — is a simple shirt that can be worn at formal occasions. In some ways, it’s a symbol of racial ethnic identity and pride,” says Monica L. Miller, associate Africana professor at Barnard College and author of *Slaves to Fashion: Black Dandyism and the Styling of Black Diasporic Identity.* “Black folks like to honor each other and themselves when they dress for these occasions (and when they dress alike for these events) — the summer barbecue is not just a meal on the grill, but a kind of communion of family and community recognizing good times.”

Linen came onto the scene in the nineteenth century, when Europe started to produce it, eventually exporting it to the United States. Yet the fabric wasn’t always a go-to fashion statement for oldies concerts and all-white boat parties. I couldn’t quite pinpoint linen’s origins in the black community, but Miller tells me that it started somewhere in the twentieth century. Black people have a tense and violent history with lightweight white cotton fabrics dating back to slavery in the American South. They were responsible for “everything from the planting and harvesting of the plant, to the designing and sewing of everyday garments for both blacks and whites, to that might be considered ‘fashion.’ first used by slave masters/mistresses and then sometimes passed down or on to the enslaved themselves,” Miller says. By the twentieth century, linen had become popular among middle-class black people, as they had more time for leisure and it was seen as a luxury garment.

While white clothing has a complicated history with American slavery, in African traditions, the color has origins in spirituality. In Santeria, white is worn for all religious services, and initiates are required to wear the color exclusively for one year. White is worn to baptisms and funerals in the South. White is a color that represents an important orisha, or deities, in several Yoruba-based African Diasporic religions. “There’s a tradition of black folks wearing white that I think maybe unconsciously carried down through the generations,” says Square.

Sure, the fabric is practical, but it also exudes a certain status level: you’d not only have to have enough money to buy linen, which is a more expensive fabric, but you’d also have to have the means to care for it, from ironing to dry cleaning. “Its diasporic reach as a fancy hot-weather fabric likely has a great deal to do with colonialism and European imperialism — if linen was originally being worn by Europeans at home and abroad in colonies in Africa, the Caribbean, and Asia, it is easy to see how it became an aspirational fabric for former colonial subjects,” Miller says.

I just turned 28 this month, but what I really aspire to be is a black auntie in my linen two-piece with oversize shades, two-stepping at an oldies concert (probably Erykah Badu by that point). Catch me there in twenty years; until then, I’ll keep watching from the sidelines, everyone asking me why I showed up to the family cookout underdressed.

“Linen in the black community, it’s cool because it’s a light, breathable fabric,” says White. “But then linen is very cool in terms of black society and black style.”

The joys of growing into a black auntie aren’t just about the linen outfits that accompany the coveted status; it’s the fact that you’ve transformed into a woman who has the wisdom of knowing just what to say and wear at all times (or at least the most important ones). And I can’t wait to master that art of staying cool.