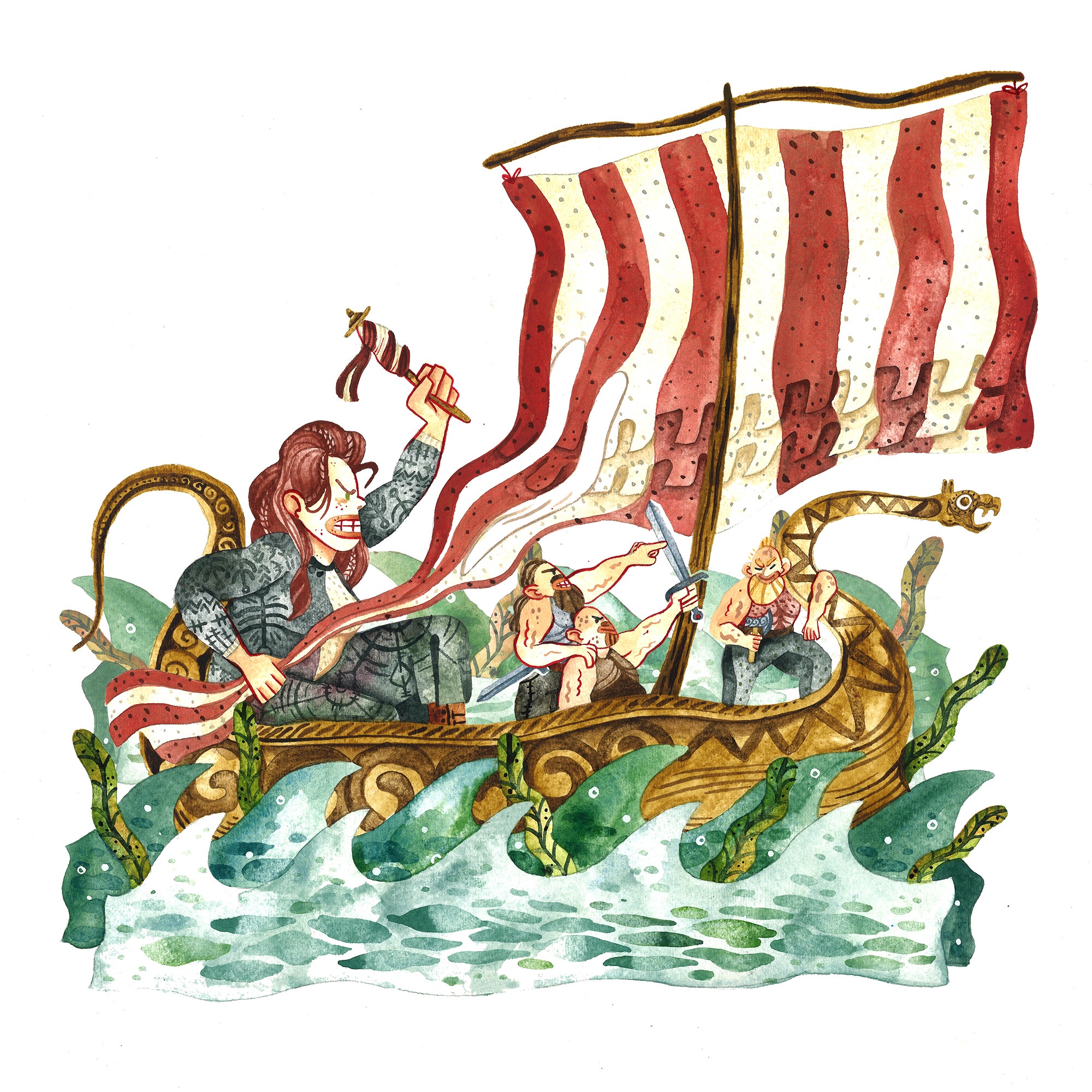 From the Silk Road, built by trading the work of Han Dynasty–era Chinese women, to the dawn of the industrial revolution, when women working spinning machines were the first people to toil in factories, women’s textile work has been *work* that has driven societies’ economic engines. Though the names of most of the women who did this work were never recorded, their labor has been critical, to not only the functioning of societies but also the course of history.

As I was writing a trilogy of books about Norway during the Viking age of exploration (ca. 793–1066 CE), I became interested in women who picked up swords and performed stereotypically male tasks and women who exercised their power from the more traditional position of wife and housekeeper. The popular image of Vikings is sword-wielding men, sailing forth to pillage and conquer. Their voyages did change the world, but they would not have been possible without the women making ships’ sails, warm garments, and cloth for trading.

The Viking Age began in 793 CE with the Viking attack on the monastery at Lindisfarne and ended in 1066 with the Norman conquest of England, when one Viking-founded kingdom, Normandy, conquered another, Anglo-Saxon and Danish England. During that time, Viking men and women traveled all over Europe and the North Atlantic, sailing as far west as North America, around the Mediterranean and to Constantinople, and through the Russian river system to Kiev. Their trade network was wide and even intersected with the Silk Road.

We have an image today of Viking women as warriors, fighting alongside their men, an image that owes more to propaganda than to history. While some women likely fought (as women have always done), Viking societies had fairly strict gender divisions, and the vast majority of women did not wield weapons.

Still, viewing Viking women as “simply” keeping house diminishes the importance of at-home activities. A housekeeper’s role in the Viking Age was more akin to managing a small company than keeping house today. At that time, households were small communities, comprising extended families along with the families of servants and slaves, and could contain over a hundred individuals. These households were self-contained economic units with dairies, smithies, and carpenters, which fed and clothed themselves, as well as making some goods for trade.

Women’s textile production was a vital part of their role, and instrumental in the economy and politics of the Viking Age. While Vikings’ success was enabled by the longship — an elegantly designed craft that could travel huge distances by oar and sail, penetrate river systems with its shallow draft, and attack and retreat quickly — that ship would not have had its awesome reach without the huge sail (measuring as much as 50 by 30 yards) that powered it. Trade, raiding, and settlement were the hallmarks of this time, but so was the weaving work done by armies of forgotten women.

The labor of turning dirty, matted sheep’s wool into cloth has been predominantly women’s labor in pre-industrial societies across the globe. It would take one woman three years of weaving to make the sail of a medium-size Viking ship — and that’s only the weaving; it doesn’t count the thousands of hours of processing sheep’s wool into the yarn that makes up the warp and weft of the fabric. Processing flax, which produces linen, is even more labor intensive (so much so that it could not be used for sail material). Estimates place the time needed for growing and processing the flax for one shirt at 400 hours.

Not only would Viking raids and exploration have been impossible without women’s labor (in addition to the sails, they created the clothes that protected sailors from the elements on long voyages), but also wool fabric they created became the chief export of the Viking Age and Medieval Iceland, putting the economy of the country into the hands of women. Wool cloth was used as currency, for taxes and tithes, and to buy foreign goods. It replaced silver currency, which had been gathered on sporadic, violent Viking raids. Now the currency was created by peaceful women’s weaving. Marriage agreements from Viking Age Iceland even set bride prices based on the amount of cloth the bride could produce in a year.

Viking Age Icelandic women also invented a type of shaggy wool coat that became very fashionable both at home and abroad. Because of its popularity and importance to Iceland’s economy, laws and standards were created to codify the size (and shagginess!) of the coats, in much the same way the French government now controls French wine. This ensured quality and fairness in trading and maintained the reputation of Icelandic craftswomen. The use of fabric as currency also led to the standardization of lengths in Iceland — after all, an *ell* of fabric, originally measured as the length from a man’s shoulder to his fingertips, needed to be the same everywhere, or a short-armed man would have an advantage in any trade.

The Viking Age is generally considered to have ended with the Norman Conquest in 1066, when William the Conqueror of Normandy invaded England. By this point, Scandinavian kingdoms were well-established countries that had entered the political world of Europe. The peoples who had once been Vikings — pagan raiders, traders, and explorers with little allegiance to a centralized authority — were now instead Christian soldiers and merchants.

William the Conqueror defeated King Harold and put all of England under Norman rule. The Bayeux Tapestry — actually an embroidery, not a tapestry — documents this in a piece of textile art, nearly 230 feet long and twenty inches tall, depicting major scenes from the events of the conquest. It is a work of historical documentation, propaganda, and artistic expression that was surely the result of women artisans’ crafts.

Though some women sponsors of the Bayeux Tapestry have been suggested, among them Queen Matilda, England’s first female monarch, most scholars believe that William’s brother Bishop Odo was the one who commissioned it. The Abbot of St. Augustine’s Abbey in Canterbury has been put forward as the most likely designer because of his previous position as head of the scriptorium, where illuminated manuscripts were created. However, there is little doubt that it was Norman gentlewomen, most of whom were trained since birth in embroidery and other fine textile arts, who did the physical work of embroidery and thus created one of the most famous and enduring historical artifacts of the Norman Conquest.

It is now common for history books to mention, briefly, the unsung work of women before moving on to political history centered around men’s violence. Still, it is worth remembering that work was not simply a support for the men in a society but one of that society’s vital engines. Viking women’s work has led to the foundation of countries and economies and created the most famous historical artifact of the Norman Conquest. Women’s work and history cannot be separated: the true history of women’s work is the history of work itself.

*Linnea Hartsuyker is a writer living in the seacoast area of New Hampshire and the author of* The Half-Drowned King *and* The Sea Queen, *from HarperCollins.*