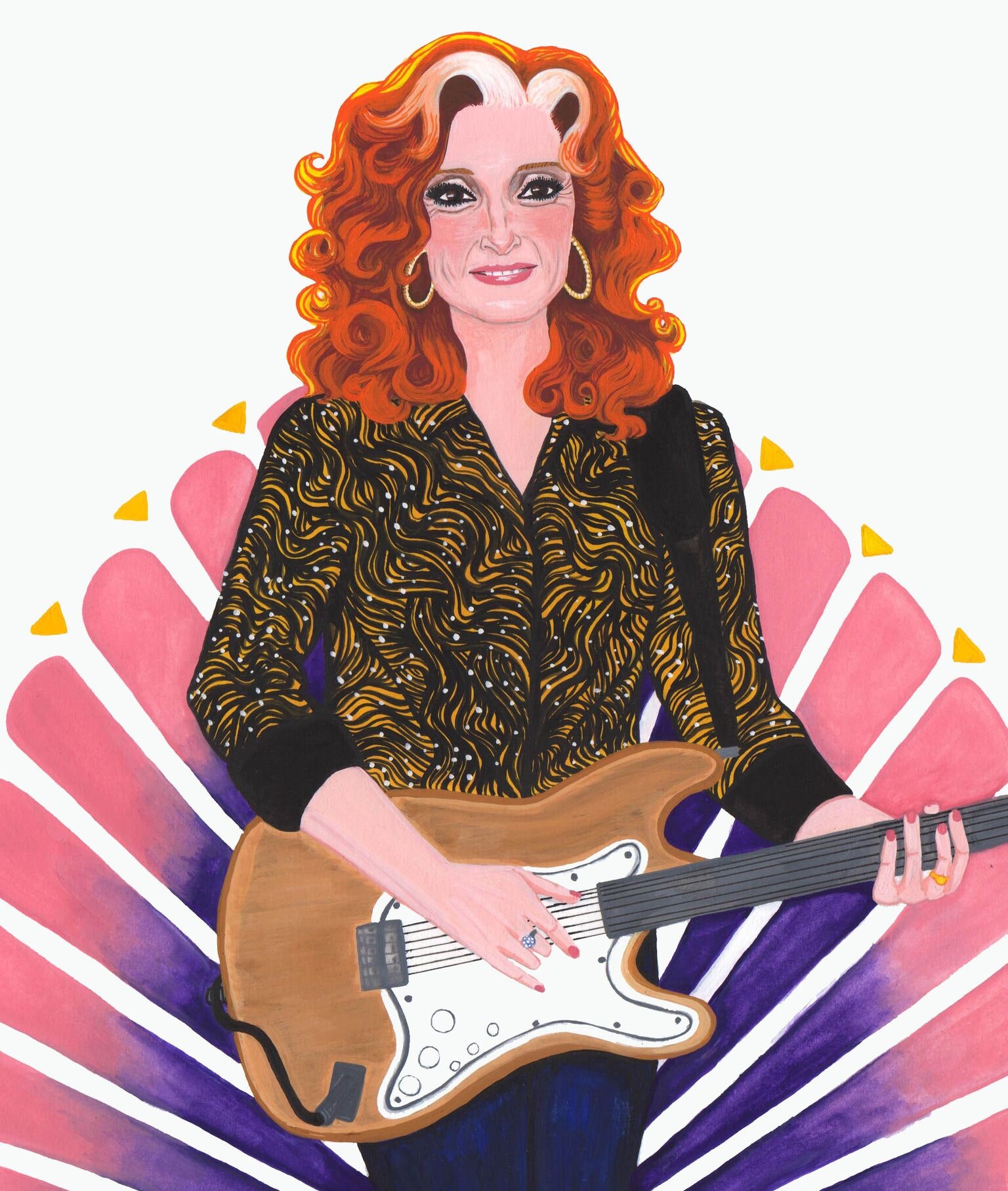 As I morphed into a preteen and began forming my own taste in music — which meant anything that my family did *not* love — Bonnie Raitt was one of the few artists I could never turn off. Her songs would play on my grandpa’s classic-rock station, and the slick sound of her guitar playing, the rasp of her singing voice, and the sheer fact that I was hearing a woman on that station in the first place kept me tuned in. Her *Luck of the Draw* hits “Something to Talk About” and “I Can’t Make You Love Me” are still etched in my brain, and these songs formed the basis of the rock nerd I became.

On Raitt’s 20th album, *Dig in Deep*, out now, the iconic guitarist and singer still sounds as fresh as ever, thanks to her continuously inventive covers of songs by the likes of INXS and Los Lobos as well as her incisive originals. The 66-year-old Raitt reopens wounds of heartbreak and loss while getting her “groove” back, as she refers to it, following a string of deaths that altered her life in the early millennium. “I look at Mick and Keith and go, ‘Hey, man. These guys aren’t slowing down,'” she says. “This, in many ways, is the most fun and vital time of my life.”

Raitt spoke with Lenny about what it means to keep living life in the face of so much death, the catharsis of singing songs about heartbreak, and her support for Bernie Sanders.

**Brittany Spanos:** It’s been so much fun to listen to *Dig in Deep*. This is the largest number of original songs you’ve had on an album in 18 years. What brought out this resurgence of new material?

**Bonnie Raitt:** It was mostly a practical consideration. I did two albums in 2003 and another one in 2006 and toured two years behind those. With the prep and the promo and all that, it was really a four-year cycle. In the midst of that decade, my older brother developed brain cancer early on and fought for about eight years. My parents both got ill sequentially and passed away in 2003 and 2004. My brother passed away in 2009, and a very good friend died a month later from his cancer battle. I literally did not have one minute or emotional space to think about writing songs while dealing with that during two album cycles.

By 2010, I’d decided to pull back and take a sabbatical. I wanted to experience all the sorrow and the grief and deal with it off the treadmill of running my own company and promoting records and being on tour. That was a real blessing. I had a lot of time to process without looking over my shoulder about what my next songs were going to be.

When it was time for that to come to an end, I was excited to work with Joe Henry. We did some sessions that spring-loaded the album, and I knew I was going to do most of the record producing it with my live band, which I did. My guitarist George Marinelli sent me a song, but the lyrics didn’t relate to me, so I sat down and wrote some lyrics. That greased the wheels, and I remembered how much fun it was to write. Then the *Slipstream* tour and the album had such great response. We won a Grammy for Americana Album of the Year, and we were one of the top three independent sellers with my first one on my own record label.

The two-year tour was such a rejuvenation after all that grief and loss, and I came back home after the two-year tour and just said, “You know what? I’m going to add some of these grooves I’ve been really missing on the live show.”

BS: On this album, there are songs that are about heartbreak and are more sorrowful, but the groove is something that keeps the album sounding fresh and dynamic. Could you talk about the motivation for that upbeat playfulness?

BR: Some of that is just the style of music that I like. There’s no formula, but I love ethnic music like Celtic-influenced ballads and Irish and Scottish music. I love mixing those kinds of melodies with rock and roll sometimes. I did it on a song called “Longing in Their Hearts” in ’93.

I wanted some fresh ideas to go with slightly different interpretations of those grooves, because after 19 records you really have touched on a lot of the elements that run through love and relationships breaking down. In this instance, I wanted to focus my attention on the political scene, and how money has basically hijacked our political system, and how pissed off I was about it. I went with a four-on-the-floor, Rolling Stones kind of rocker where I could just turn up my guitar and go head-to-head with my other guitarists.

**BS:** “The Comin’ Round Is Going Through” is one of the best political songs I’ve heard in a while. There haven’t been too many political-rock anthems in the past few years.

**BR:** Oh, thank you. I tried to write the song so that it was covering a wide spectrum. I realize the people on the other side feel that our progressive side is ranting and raving and not checking the facts. They could level all of those same arguments at the one percent, which most rock stars are in. The fact is, the system is favoring big money, and big money is buying elections and buying influence in Washington and stalemating a lot of progress on all kinds of issues, whatever side of the aisle you are on.

Too few people are controlling what’s going on, and it’s not trickling down, and the jobs are going overseas. What’s broken can be fixed, and it needs to be something new and fresh and a way of consciously deciding to not let things like (1) stay. We have to change the legislation. I’m glad you liked the song. We haven’t played it in front of people yet, but it’s just really fun to be able to express musically exactly what you’re feeling lyrically.

**BS:** You’ve been a huge supporter of Bernie Sanders, who is someone speaking out on those issues. Can you tell me more about why you’re drawn to him?

**BR:** I’m just glad he’s getting the traction that he’s getting, especially energizing so many young people. I think what’s making Bernie so viable is that everything that he’s saying makes a lot of sense. There are people throwing aspersions on his program. Hillary in particular is saying that these are all just pie-in-the-sky platitudes, but in fact his programs and how he would pay for these things are very, very concrete and very well thought out. There are a lot of people that agree that it’s quite possible. It’s just reframing how you’re thinking about stuff.

Do I think that ultimately he’s going to be able to win? I don’t know if anybody that progressive would be able to rally the rest of the county, but I’ve never seen so much wildfire, grassroots support, and small donations, and volunteers, and so many people turning up for his rallies.

**BS:** Another really wonderful, surprising moment on the album is the INXS cover. Can you tell me about what drew you to covering “Need You Tonight”?

**BR:** I’m really glad it was a nice surprise. If I hear a song that I think has great music and a great message and musically just tweaks me and appeals to me, then I love to reimagine it in my own style. I’m a huge INXS fan. I’ve always wanted to do this song. I hope people will enjoy it too.

**BS:** What are some newer artists or songs that you really love?

**BR:** When something’s a big hit for somebody, I tend to leave it alone for a lot of years, but I eventually started doing Aretha Franklin’s “Baby I Love You” and “Since You’ve Been Gone,” and eventually I did “Dimming of the Day,” by Linda and Richard Thompson, because their version was so incredible, I wouldn’t even want to touch it. I did a version of “Burning Down the House” on my live *Road Tested* record back in ’96. I love the Talking Heads. I basically am a music fan, so I pick these tunes so I can add them to the set live. I even do an Elvis Presley song called “Big Hunk O’ Love.”

From the last few years, “Uptown Funk” is one of my favorite songs I’ve heard. I’m a big Adele fan. I love JD McPherson. I think Brandi Carlile’s fantastic. J. Cole is on the rap side and has got something to say that’s really fresh. Lake Street Dive is one of my favorite bands. God, there’s so many, I could just keep going on. I don’t know if I would ever perform their songs, but stay tuned. You never know.

**BS:** I would love it if you collaborated with J. Cole, because he is one of my favorites. Earlier, you mentioned the influence of heartbreak and the autobiographical nature of the original songs on the album, and I think “I Can’t Make You Love Me” is the epitome of that. Can you speak to that autobiographical element in your songwriting and how it’s progressed over the years?

**BR:** The one thing you don’t want to do is repeat yourself, because when a song is good enough to make a record and make a set list for the rest of your life, like “Angel from Montgomery” or “I Can’t Make You Love Me,” there’s no reason to go over the same ground. I’m very aware each time I make a record of the many that have gone before, and I’ve covered a lot of different aspects.

This record has probably some of my deepest personal digging. The first verse on “The Ones We Couldn’t Be” is about a relationship, and really applies to several relationships, seen from this vantage point years later. The inspiration for the song was someone in my family. We’ve had a complicated and difficult relationship. I started with the idea “I’m sorry for the ones we couldn’t be” because I couldn’t be who they wanted me to be, and I know that I let them down as well.

When you’re not getting along, you tend to blame the other person. But really the heartbreak is both of you. You hold each other up to an expectation that is unrealistic. It’s only later that you have compassion and perspective, especially when they’re gone. This song was very deep for me because that realization probably couldn’t have come until this point in my life.

Coming out of any dark period, you eventually step out of it, whether it’s divorce or losing your best friend or your own health crisis or you lose your parents. In my case, my brother was my closest person in the world to me. At the time I was going through it, I didn’t think I would be able to come out of it. But just like love, you don’t think you’re going to be in love again, and, sure enough, life keeps happening.

*Brittany Spanos is a staff writer for* Rolling Stone*. She cried the last time she sang “I Can’t Make You Love Me” at karaoke.*