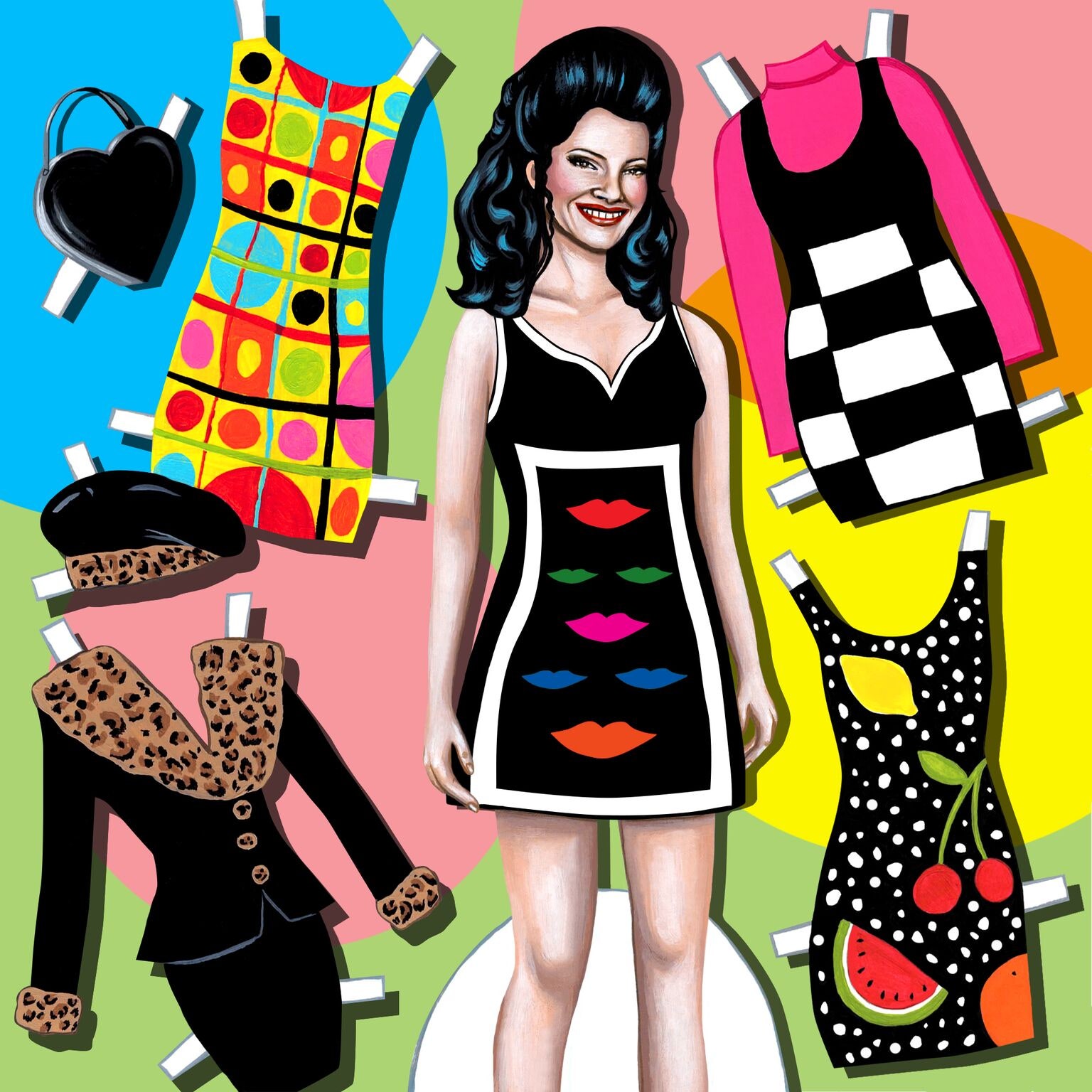 A decade ago, when Brenda Cooper went in for career day at her son’s school, she brought in some skirt suits, colorful vests, and purses from _The Nanny,_ assuming none of the kids had ever heard of the show. But all the girls came running up to the front of the class to profess their love for Fran Fine; turns out, they watched _The Nanny_ on Nick at Nite. As a child of the ’90s, I grew up using my allotted 30 minutes of TV time to watch it too. TV execs (3) to make Fran Italian so she’d be more relatable to middle America, but the Jewess from Queens, or “the flashy girl from Flushing,” as the tagline went, prevailed. We loved her because she was unlike anyone else on TV.

If _The Nanny_ was the _I Love Lucy_ of the ’90s, in color instead of black and white, it was Cooper who brought it into bright, sequined, and often clashing color by way of her costumes. She created the Fran Fine Formula (more on that later) and helped shape the characters by way of their daily dress. After four seasons on _The Nanny,_ Cooper left to have a child. But a year later, she was back in the TV world as a host on E!’s _Fashion Emergency,_ one of the first big makeover shows. Since then, Cooper has worked as a stylist, costume designer, and personal color expert, which means she advises individuals on what colors suit them best.

Though the show isn’t streamable anywhere (help, Netflix!), Cooper’s costumes have reemerged thanks to the (1) Instagram account. (I hoped to speak to both Drescher and Cooper, but the former was doing her Cancer Schmancer Cabaret Cruise, and when I suggested we speak in the weeks following, her PR agent said, “Thirty minutes is a pretty long time.”) When I called Cooper in July, she’d just gotten back from a seven-city European tour for the TV show _Better Late Than Never,_ which required 40 suitcases’ worth of clothes for guys and still found her chasing down white underwear in Stockholm. On the phone, she’s warm and funny, with an unexpected and very posh British accent.

**Alex Ronan:** How did you end up doing costumes for _The Nanny_?

**Brenda Cooper:** I was pursuing an acting career, and that going nowhere faster than the speed of light. So I was trying to figure out what to do, and I’ve always been good at putting clothes together. I got a job at a fashion-consulting agency, and my second client insisted on introducing me to a Hollywood costume-design agency. I didn’t think they’d talk to me, but three days later I had a job as a costume assistant, and three years later, I was walking up onstage to get an Emmy for _The Nanny._ I met Fran Drescher on the set of a show called _Princesses,_ where I was a costume assistant, and she told me,”If I ever get my own show, I want you to be the costume designer.” A year later, she sat next to a CBS executive on a plane, pitched him her idea, and it became _The Nanny._

**AR:** What did you want to do with the show, costume-wise?

**BC:** With Fran, I wanted you to know who she was before she even opened her mouth. I was dressing the entire show, so that’s like 50 to 60 outfits a week. I needed a system of dressing to simplify things, which was how I came up with the Fran Fine Formula. I started off with a black silhouette: so a black turtleneck and a black short skirt, black opaque tights, and black high-heel stilettos. Then I would add color to it. Nothing would ever come from a store and go on camera without being altered in some way to accommodate her character. We’d shorten skirts to make them sassier, pull in tops to make them more form-fitting, and often swap out the buttons for more impact. It was a jigsaw puzzle of possibilities. You get into a rhythm. Monday morning was a production meeting with the latest script, then we’d shop, prepare, and sew in order to fit all the actors on Wednesday. Any changes to costumes would happen on Thursday, and then Friday, the show would get shot in one evening in front of a studio audience.

**AR:** You did a really good job creating style lineage with Fran’s mom, Sylvia Fine, and her grandma, Yenta. How did you go about dressing them?

**BC:** Can I just tell you something, Alex? It was so organic. Completely intuitive. It wasn’t something that I really thought about. I just did it. Renée still tells me the story of when I had her in the fitting room the first time. The first thing I handed to her was a corset. She looked at it, and she goes, “What’s that?” I said, “A corset.” She goes, “Who would wear that?” I went, “You would wear that!” She was a little resistant at first, and then she put it on. Now, she says, “I didn’t know who my character was until you dressed me.”

> It was a jigsaw puzzle of possibilities.

**AR:** What a huge compliment. When I was watching _The Nanny_ as a kid, I had no idea Fran was wearing so much designer clothing.

**BC:** Nobody knew it was straight off the runway. I mean, it wasn’t straight off the runway. Often, I was shopping at Neiman Marcus, grabbing Moschino, Todd Oldham, Nicole Miller, and mixing thrift-store pieces in. I had a budget, and it wasn’t a big budget either. I remember once I had this Dolce & Gabbana vest that I had paid like $1,000 for, which was a lot back then. It was all brocade and velvet, but I couldn’t make it work anywhere. Then there was an episode with Twiggy as a guest star getting married. Fran was a bridesmaid, and so I cut off the sleeves of a long-sleeve lace leotard with a ruffle cuff, added them to the vest, and then made a long velvet skirt to go with it. That outfit looked amazing.

**AR:** _The Nanny_ had so many guest stars, from Pamela Anderson (playing Fran’s nemesis Heather Biblow) to President Donald Trump (playing himself, of course) to Jon Stewart (Fran’s love interest, until it was revealed they were cousins). Did you dress the guest stars too?

**BC:** Sometimes I did, but often they came with their own stuff. When Patti LaBelle came on the show, she was supposed to bring her clothes, and she didn’t. She shows up on set with nothing, and we were shooting in two hours. So I just got into my car, ran into Beverly Hills, and found a dress at Neiman Marcus, then I went to Loehmann’s and found a Donna Karan skirt. I turned the dress into a shirt, cut out the center of the skirt to make it a ’50s, hostess-style skirt, and put silk pants underneath it. I had to literally sew Patti into it because it was done so fast, but she looked like a million dollars. She loved it so much that she took it. It was a huge compliment that she kept it.

**BC:** I bought copies of my favorite pieces, things like the Moschino black patent-leather heart-shaped purse, or the striped Moschino vest from the pilot episode. But when _The Nanny_ finished, what happened to all the rest of the clothing was so painful.

**BC:** Each of the studios has a central wardrobe department. So, the _Nanny_ collection just goes to wardrobe and gets mixed in. Then you go in months later on another show, and one of your babies is just on a rack. But a few years later, Sony _sold_ the clothing. I think they sold it all to a thrift store. That was so hard to hear.

**AR:** That sounds devastating. But maybe there are real-life Fran Fines who started building their wardrobes with castoffs from the show?

**BC:** Yeah, I guess that’s possible. The clothes are gone, but what I love most is people talking about how her character and style inspired them. I’ve seen so many Instagram posts and gotten so many notes saying “Thank you, her confidence really inspired me when I was having a really hard time with my self-image.” Nothing could make me happier, because besides looking good, it’s always about self-esteem.