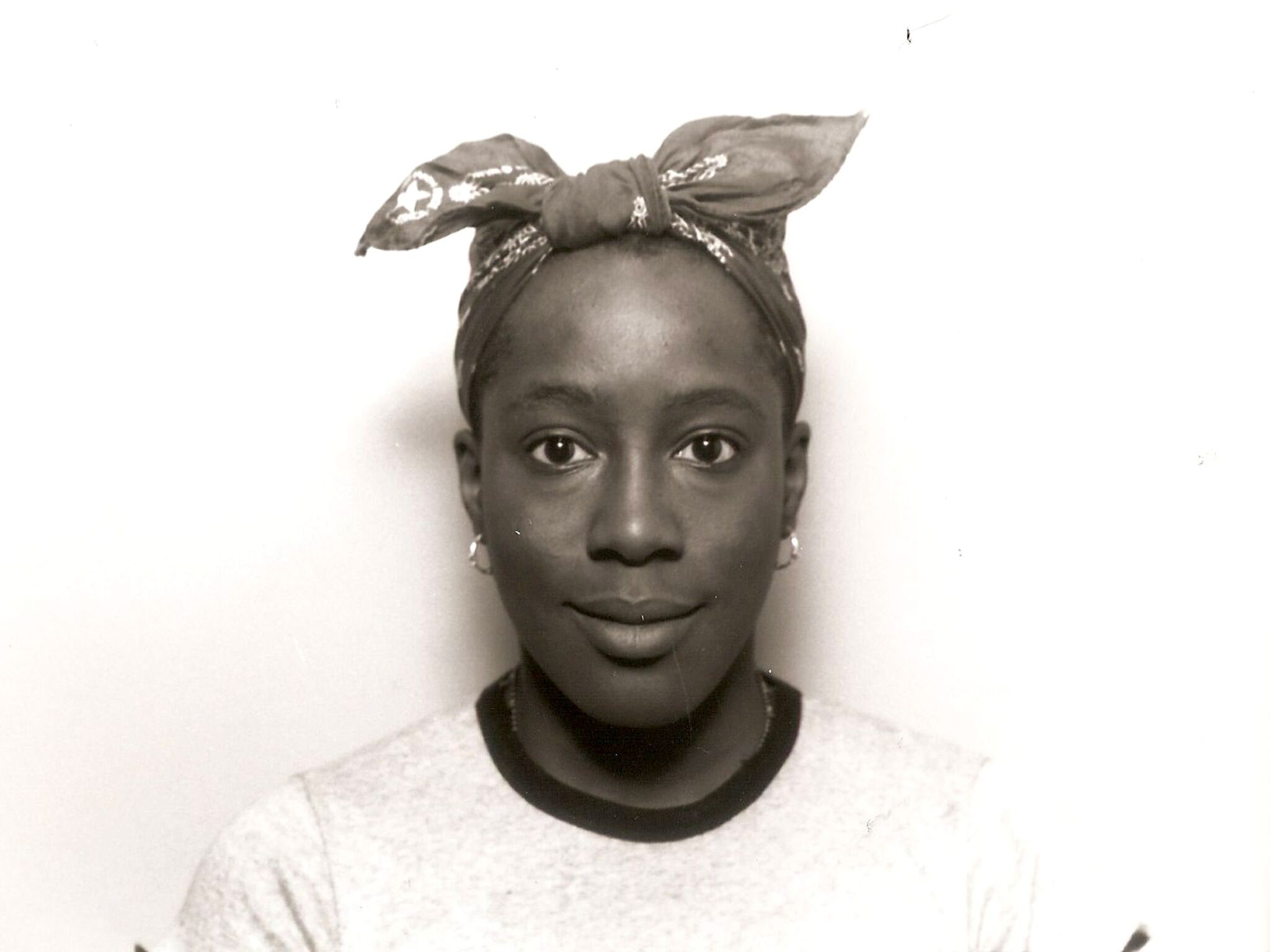 I first saw Cheryl Dunye’s *The Watermelon Woman* this past March at an (7) screening celebrating the film’s 20th anniversary. *The Watermelon Woman* is known for being the first feature film directed by an African American lesbian, but until now, the DVD version of this award-winning and groundbreaking film looked like “chicken scratch” (Dunye’s words). The film was recently remastered by the Outfest Legacy Project, spurring a rebirth of interest. It’s about grasping for stories hidden and seeking identity, and watching it two decades later is inspiring its new audience to do the same.

*The Watermelon Woman* follows a 20-something lesbian, Cheryl (played by Dunye), who works in a video store and embarks on an epic and experimental deep dive to make a very personal documentary film. Her subject is Fae Richards, a stunning black actress who played archetypal mammy roles in 1940s Civil War movies but was vaguely credited only as “The Watermelon Woman.” Cheryl reinscribes the mammy image; she speaks directly to the camera, gesturing as Richards comes on-screen in a film called *Plantation Memories* and says: “Girlfriend has got it going on!”

Cheryl, researching pre-Google, delves into archives (including the Center for Lesbian Info and Technology, a.k.a. CLIT) and travels to interview people who knew Richards, in the process discovering that the actress was also a lesbian, a flame in the gay scene in Philly in her day.

It’s surprising to learn that *The Watermelon Woman* was made up. The credits read, “Sometimes you have to create your own history. *The Watermelon Woman* is fiction.” Dunye and cinematographer Michelle Crenshaw created authentic-feeling archival footage that brings the actress to life and talking-head interviews that make the faux-documentary aspects pulse. Perspectives switch, the picture alternates between video and celluloid, and there are spirited dance interludes: it’s a queer, postmodern conversation across time, one that gives legacy and celebrity to disregarded identities.

Dunye, now a professor at San Francisco State, remains an incredible filmmaker and creator. We spoke on the phone about her first film.

**Cheryl Dunye:** San Francisco Film Festival just announced the screening of The Watermelon Woman at the Castro. Yay! Which feels so great because we premiered there 20 years ago, and it’s at the Castro so it’s full circle.

**Katherine Bernard:** Where has the film been all this time?

**CD:** The negative was in a vault at the UCLA Film and Television Archive; she was just a lady in waiting there until the 20th anniversary spurred all this movement around its being born again.

**KB:** May I tell you a story? Michelle Crenshaw came out into the line before the screening and gave my girlfriend, who is a director of photography, one of her extra tickets. We didn’t know who she was in the moment, we wondered if maybe she was involved with the film, then during the Q&A we realized that she had walked outside for one second, magically spotted another female DP, and gave her the gift of watching the film.

**CD:** Michelle is so powerful. She applied herself to the project before anybody else did. Really, she was the first person on board. She’s just great. She’s so underutilized in the sense of her oeuvre. She’s in the union for camera, so she’s not in the cinematographers’ union, it’s very hard to get into. She keeps me abreast of how difficult it is, but she is there to try to make some changes. We know that behind the set can be a very difficult for place for women of any kind.

**KB:** For the film you wrote incredibly sharp, funny dialogue that was really directly engaging with identity politics, while also experimenting with perspective. The direct-to-camera monologues that Cheryl gives are like personal project updates we see all the time now on YouTube. What work was influencing you at the time?

**CD:** Valerie and I, from the moment when we got together, we were just joking all the time. It’s important to do that improv.

I think the biggest film that struck me as a young individual was (8), by Jim McBride . It’s about this soldier who’s about to go off to war, and he’s documenting his life, and his girlfriend breaking up, and this and that. He’s shooting a 16-millimeter film. It was that, coupled with * (1)* (2)] and the work of Michelle Parkerson, who was the only other black lesbian I had seen in the film-festival world. I was just like, “Let’s just go. Let’s just play.”

**KB:** One of the remarks that you made on the panel in LA was about observing your personal wardrobe in the film 20 years later, how that really marked your identity in your 20s. Can you tell me a little bit about that process of revisiting and looking at how you presented at that time?

**CD:** I was a baby dyke. I think baby dykes were soft, which is – I don’t even think there are these terms anymore — a little bit like wanting to be androgynous. With that sort of identity, mind and body play with each other all the time. You had to have character and edge and show that you were part of a certain kind of community, and there was a lot of that when we had places to publicly gather, bars and things like that. Because we don’t have that so much anymore, but we do have the Internet and other things, I think there’s some residue of this. I had been a little punk anarchist in Philly, so some of the boots I wore and things like that were real.

You won’t find me in a film wearing a little skirt again, or a dress. But I do believe wardrobe really needs to be something that you think about in filmmaking, and that’s one place that people don’t spend a lot of time. It can be a really strong part of your design and storytelling and really place something in a culture.

There are bits and pieces of all my life on the screen, and that’s the only way to make a movie like the type of films that I make. Queer filmmaking has moved away from that, maybe it’s moving back to it a little bit with younger folks, and especially with trans identities, queer trans identities, we’re starting to see a freshness. We’re starting to see the secret club that you want to be a part of.

**KB:** I was struck by how robust the “Thank You” section was in the film’s credits. When you have an indie project that is so low-budget, you as an individual have to pull from so many other economies — friendship, love, talent, time — to make a film. You went through that experience so successfully, I wanted to ask about tapping into a creative community and its resources.

**CD:** Filmmaking is really about movies, seats, and selling a ticket. To do the kind of counter thing to it, you have to use those different economies. Every bit of the film, down to the final credits, it was just asking everybody for a dollar. That was my “Kickstarter” back then. It was really about everybody who believed and wanted this to happen.

I find that remarkable. That’s my favorite part of the film, when those credits come up. That and hearing the gasp in the room prior to that, when it says *The Watermelon Woman* was fiction. Some people believe it was real, which is incredible to me. That sense of who was my community at that time and still is, if they’re still alive, is beautiful. I think *The Watermelon Woman* had the right balance with narrative and experimentation. This film plays equally at film festivals as it does in art settings. I’m really happy about that because that’s really what I am. I make cinema.

Making cinema allows you to do those experiments. Making movies doesn’t. Making movies says you have to do it this way, that way, marketing, whatever. We’re really going to go for this, cut this out. Cinema says, “OK, go ahead.”

**KB:** How did you feel when you were dealing with Representative (3), the congressman who wrote an amendment trying to reduce funding for the (4) because it endowed *The Watermelon Woman*? He said he was shocked that a film described in one review as having the “hottest” lesbian sex scene “ever recorded on celluloid” received endowment.

**CD:** It was breathtaking. Breathless. Shocking. All those sorts of emotions that you could go through, but I think the biggest thing is that I was not there representing myself. *The Watermelon Woman*, I guess, had to be quiet at that point to allow others to speak for her, but it just felt hard to be silent at the time when the whole piece is about not being silent.

That is ultimately the feeling that I took away from it, in the sense that we don’t see black lesbian feature films out there or people doing this sort of stuff anymore, and it doesn’t get celebrated. It’s like, it can get attacked, but is it getting made and supported and are we continuing to do this stuff? Well, if nobody else is going to do it, then I have to keep doing it.

It also made me feel more American in a way, like, I am making American art, and people understand that. Once (5) said that this film is art, that you might think it’s pornography, and you want to take this money away, but this is art, and this is one person’s expression of it. That it does talk about a whole bunch of other things, so step back. To hear a black congresswoman represent, and actually get to see it, was a beautiful moment, really, ultimately. I did get to go through every emotion that one could go through.

It was a big, real lesson in the game of politics and where art from me has to come from. What I do in the film is seen every day on television at this point, or wherever now, or in movies … everywhere. It wasn’t even an issue. Time does change things. It’s amazing.

**KB:** I wanted to ask as a final question: What’s your mountain now as a creator? What’s really ringing for you, and what are you working on?

**CD:** Personally and creatively, I am working on the short that I did with Mark Smolowitz, who helped restore *The Watermelon Woman*, called *Black Is Blue*. It has just come off the festival circuit with a lot of awards, and at every one of the 30 or 40 screenings that we’ve had, people keep saying, “When’s the feature coming out? My God.” It’s about a black trans man living in Oakland.

As for the new *Watermelon Woman* fans, I want them to understand that more films have to be made, and you guys have to do them. So it really is that sort of kicker, not that I have to become a black lesbian filmmaker. I already did it. Now, who else is doing it? Step up to the plate of your lives and your *Watermelon Woman*, whomever that might be for you, and do it. It’s a call for action in that sense and putting yourself in the picture. I think that’s one thing that I want these younger audiences to feel and do.

*Katherine Bernard is a (6)* *in New York. She’s super grateful to Alice Royer and Carrie Cheek for introducing her to* The Watermelon Woman*!*