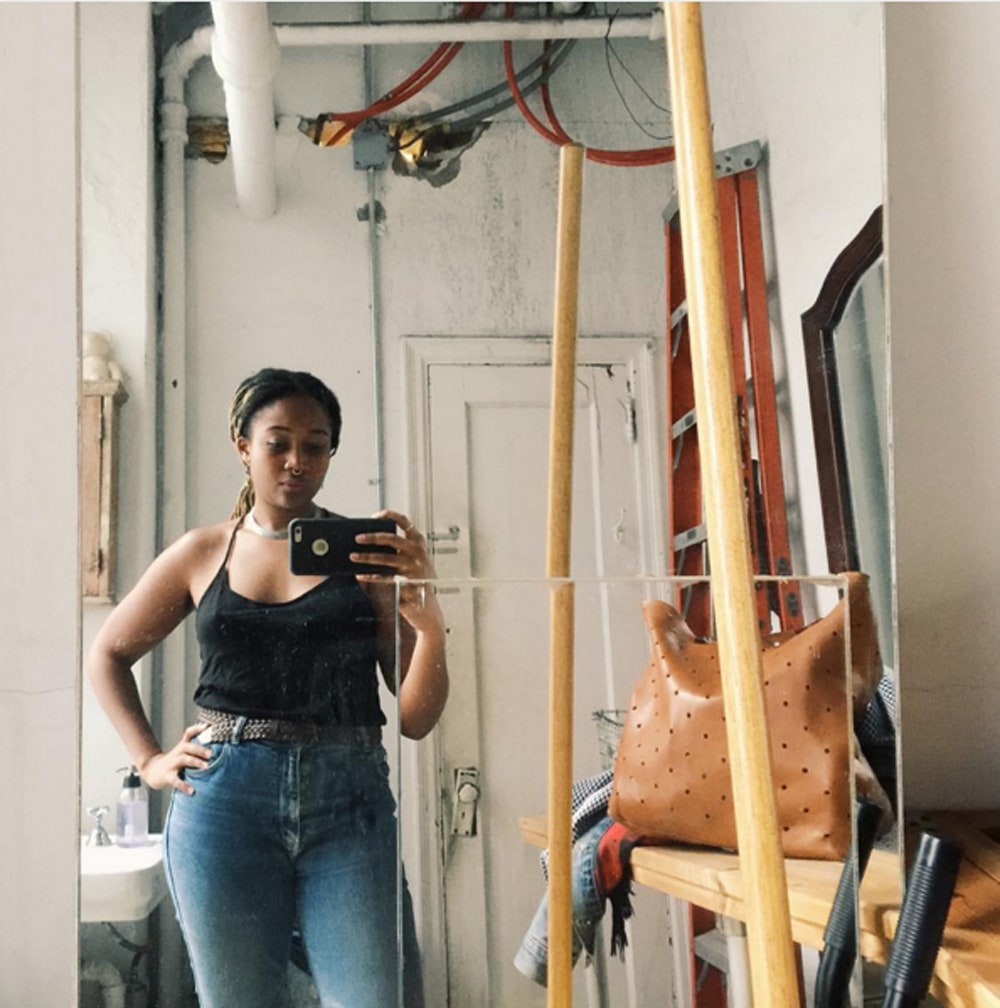 Twenty-five-year-old Kimberly Drew is one of the art world’s rising new tastemakers, specifically because her work is centered on dismantling the art world’s old gates. In July, Drew was named online community producer for the Metropolitan Museum of Art. She manages content across the Met’s Instagram, Twitter, and Facebook accounts, digital portals that serve as accessible windows to the museum’s collection and exhibitions. In other words, Drew gives an art education every day.

Before building community relations at the Met, Drew gained world-renowned status directing two influential Internet art channels: (2), her personal Instagram, which has over 82,000 followers, and the (3), one of the most comprehensive collections of black art online. Drew’s meticulous curation of Black Contemporary Art has solidified the site as a digital, living museum, recording influential black artists around the world. Curators, art administrators, and enthusiasts alike look to Drew’s forward-thinking Internet projects, which are on pace to restructure the whiteness inherent to the contemporary-art canon.

In both URL and IRL, Drew’s work centers on the complicated intersection between race, tech, and art. In our conversation below, Drew and I talk about what it means to be a black citizen in a supposedly borderless Internet landscape, the black technologists turning the hacking community on its head, and the anxiety that comes with building personal online worlds.

__Doreen St. Félix:__ Being black creatives who work on the Internet, it felt like you and I were bound to connect. I want to start our conversation by asking you about another black creative — our mutual friend and collaborator (8), tech’s most visionary writer. Are you two working together?

__Kimberly Drew:__ Jenna and I met on the Internet, of course. Now we’re thinking about how to work together on some projects. I value her perspective as a person thinking about technology in a creative way, a very introspective way, because it’s so easy to get out of touch in these conversations. For example, the Internet was made for English-speaking white people. Period. No one critiques that. Twitter only just adopted the ñ. If you write a hashtag, it now “sees” the ñ. There’s so many languages, there are other characters like that where you just simply could not communicate on the platform effectively because your language doesn’t apply. That’s fucked up. Mark Zuckerberg wants everyone in the universe to have Internet, but the Internet’s not for them.

__DSF:__ I experience that often with my last name. People ignore the accent as if it were an accessory, as opposed to a different letter. And you came to that realization organically, about the Internet forcing all language to English standards. Were there people or texts that complicated that understanding?

__KD:__ It’s in two parts. It happened organically, talking to other friends, because I like to talk to people about their first experience with technology. Also talking to people about the privilege of accessing Internet. People say, “Yeah, we had a computer,” or like, “Yeah, I had a Xanga page.” My family had a computer. I’ve been on the computer since I was six. For me, I had this moment of awakening. “Not everybody has this very saturated experience with technology.” There’s a lot of research on the early years of the Internet and the digital divide. It wasn’t until the early 2000s, according to the Pew Research Center, that many black people across the world gained Internet. Mozilla, not adequate for some reason, built a browser specifically for black people called (9).

|||
Image via @museummammy, from L to R: @JaysonMusson’s Coogi painting, A preview from the Middle Kingdom Egypt show at the Metropolitan Museum of Art
|||

__DSF:__ Tailored to make the Internet useful for black people? Like the apparent logic behind black-targeted websites, (10) for example, expanded in a universal browser?

__KD:__ Yes. There’s a narrative around technology that assumes a very Silicon Valley orientation. Blackness is a technology in and of itself. The way we survive and thrive has always been contingent on building technologies against the system that sets us up to fail.

__DSF:__ There’s some literature that claims hair braiding, weaving, and the like is a kind of technology, which I find provocative yet accurate. Do you have any thoughts about black technologies?

__KD:__ I’ve got opinions. (11) is a great graphic artist who went to Yale University School of Art, straight from Zimbabwe. She was thinking about colonialism and the graphic design around textiles specifically, and how they came into being part of our visual culture on the continent. One of her recent (4) is African hair-braiding salons. She’s looking at the graphic design within them, thinking about those little cards that you get that are amazingly designed, and trying to unpack how we can actually think about that as an identity.

__DSF:__ You began your career on the Internet. Can you tell me about beginning your Tumblr, (6)? Is there a connection to be drawn between your two disciplines — art history, which can be coded as white and bourgeois, and African American studies?

__KD:__ I didn’t realize how overwhelmingly white art history was because I never equated art with whiteness. I come from a family of people who are very creative, and creativity was this thing that was totally open-access. Art was always around, and whenever the family would gather, we went to museums. I never felt uncomfortable in a gallery space, but it’s great to hear from people who do feel that way so I can try to figure out how to create better spaces for those people, though it’s not my personal experience.

> Blackness is a technology in and of itself. The way we survive and thrive has always been contingent on building technologies against the system that sets us up to fail.

__DSF:__ So even though art history didn’t feel like a white-dominated space for you, your practice makes platforms for other people of color who might have been alienated from that world.

__KD:__ Art was the wallpaper of my life. I had always been taking African American studies classes, and I had a really great adviser at Smith who saw me. He never pushed me away because of my angst. He wanted to know more about why I felt the way that I felt and give me tools to work around what it means to be a young black punk child. Thinking about the rage that someone like Nina Simone would have. That I wouldn’t have to always be happy, that I could be a person who’s riddled with anxiety, the possibilities.

|||
Image via @museummammy, from L to R: Exhibiting Blackness: African Americans and the American Art Museum by Bridget R. Cooks, Denzel Washington on the cover of an old issue of Interview, A piece by Howardena Pindell at the Brooklyn Museum of Art.
|||

__DSF:__ In Haitian storytelling, our method of call-and-response is called krik krak, krik being the call, krak the response. That’s the importance of public dialogue across the black diaspora. The Tumblr and your Instagram account function as real spaces for viewers to begin a conversation with contemporary art.

__KD:__ After I’d had the website for three years, I did the (5) fellowship. My mentor said, “What you’re doing is huge, you know that? People in New York talk about it and know about it.” Curators look at it. There’s numbers, so you look at your number on Tumblr and you think, *People like this*. But you don’t know who those people are. Coming to New York was so amazing in terms of thinking about how my voice could operate in the world because I didn’t think of myself as a person who had a voice before I got here. But the blog was being taught. People used it in their syllabi.

__DSF:__ Are you expanding your role as a web-based art innovator to physical platforms? I know that this past July, you began doing social media and community work at the Metropolitan Museum of Art.

__KD:__ I do conversations with artists now. Two or three years ago, I began by bringing people into the gallery spaces and talking about the works on view. I did an art walk where we saw (1)’s exhibition at the Guggenheim. Since then I’ve channeled my energy to web-based spaces, because they travel more easily, and they can give people tools before entering a museum. Working at the Met, I know it can be scary and huge to some people.

__DSF:__ Is there a particular strain of contemporary art you’re focusing on now in your IRL conversations?

__KD:__ Technology, because there isn’t a lot of conversation around black technologists who make things creatively. The first talk I did was at the Brooklyn Museum in February, with two artists, Devin Kenny and Sondra Perry. I did a conversation with Salome Asega, she’s an Ethiopian engineer, hacker, and gamer. Yulan Grant, a Jamaican DJ and video artist who is thinking about tech and race. One of her projects is a (7) that tracks every time an unarmed black person is killed by police.

__DSF:__ Is it challenging to work in new media in an older institution like the Met?

__KD:__ Most of our audience is international. Only a third of our Facebook likes are from people in the United States, and even a smaller percentage is in New York. Our community is not geo-specific. It’s built around language that’s inclusive, it’s built around images that are intriguing. I’d like to think that our social-media goals are to invite people into the museum in any capacity they can access it. Our primary goal is to educate. I’m interested in trying to share things that are urgent, uplifting, that are not false either.

__DSF:__ I often scroll through @MuseumMammy as if it were a mobile exhibition. You have over 80,000 followers. Do you have an overall vision for your posts?

__KD:__ I want to make sure I have all the pertinent information so people can do research on the things I find valuable. The other day I went to the Costume Institute Library at the Met, and they have every *Interview* magazine ever. I posted some covers. I always put captions. I make a point of tagging and hashtagging effectively. That’s kind of my unified theory. If I go and visit an artist’s studio, I ask their permission and then share their work. I have such anxiety about my account and how ridiculous it looks sometimes. I’m a self-doubting millennial who’s like, “There’s too many colors. There’s not a through line.” I don’t do anything that consistently as a person anyway. I have an erratic existence I’ve come to terms with and feel really good about, at 25. My Instagram mirrors that. My mind and my eye can be anywhere at anytime.

*This interview has been condensed and edited.
Doreen St. Félix is Lenny’s editor at large.*