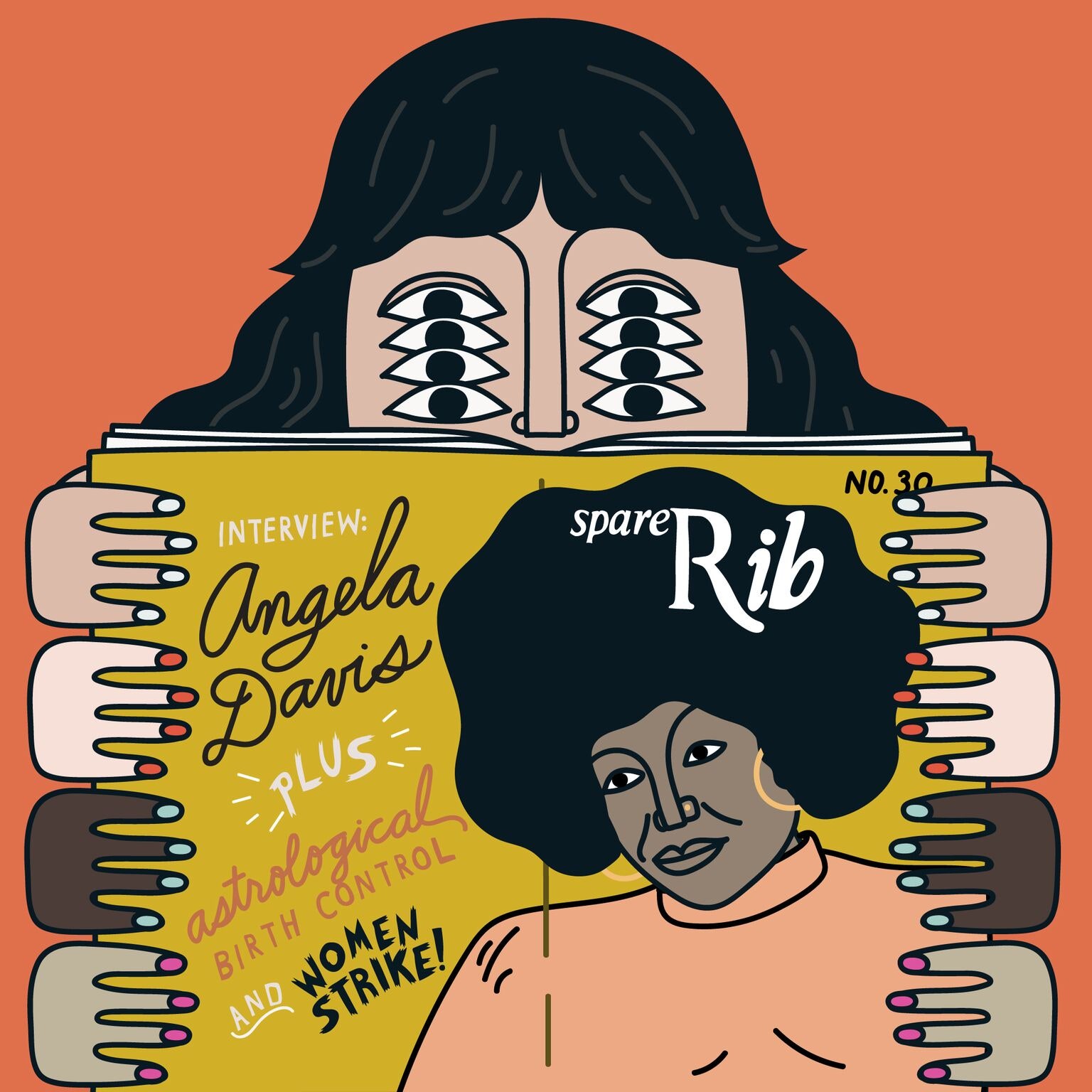 On a recent trip to London, I walked past newsstands throughout the city, some of which have stood in the same location for centuries, and I imagined an England of the 1970s. In place of a 2017 issue of _The Daily Mail,_ with a cover featuring a reproduction of Kylie Jenner’s latest selfie, you might have seen this daring magazine cover: a close-cropped image of a woman clutching a lacy pillow with a satisfied smile, with an accompanying headline that read: “The Liberated Orgasm … Make a New Year resolution to have one!” Whether you were enticed by its possibilities or repulsed by its vulgarity, it surely made some impression on you. Above it, sharp serif letters spell out _Spare Rib._ The magazine’s name refers to the Bible creation story where Eve is formed out of a rib of Adam, a small indication of the humor and frankness that would be central to the next twenty years of feminist publishing.

Reenforcing its tongue-in-cheek title, _Spare Rib_’s tagline, “The new woman’s magazine,” was a call to revolutionize representations of women in media, and it echoed the intentions of founders Rosie Boycott and Marsha Rowe to have a publication that was both accessible to the masses and challenging in its feminist criticisms.

_Spare Rib_ began to assemble in a time when (and in rejection of) archaic laws such as the Married Women’s Property Act of 1882, which required British women to have a male co-signer for mortgages. While (1) was instantiated in 1964, giving married women slightly more financial freedom, it was written with the expectation that women would depend on their husbands for income in the form of allowances, and did not include protection or recognition for independent, working women. Violence against women was also at the forefront of feminist thought at this time. (2) by the City of London made it illegal for a husband to beat his wife between a set amount of hours during the night. This bylaw was put in place less for the safety of the woman and more for the convenience of the neighbors subjected to the loud noises it created.

Some of the women who became involved with _Spare Rib_ had previously worked for the underground and offbeat publications _Oz_ and _Forum_. By working in the alternative press, they had hoped to find a more accepting environment than the conservative, male-dominated offices on London’s Fleet Street, which was the home of _The Times_ and _The Sun_. These women soon found the counterculture itself to be exclusionary and were hired more often for office positions in support of men than as writers and editors.

Like many publications geared toward social movement, _Spare Rib_ launched with a manifesto. The believed the feminist movement could not progress without (3)” All three declarations firmly countered some of the biggest criticisms of the women’s movement at the time: that its actions were too aggressive, its rhetoric too elitist, and its supporters too uptight.

Even with _Spare Rib_’s decidedly revolutionary bent, it did not shy away from more mainstream stories, about relationships or homemaking, but they were juxtaposed with articles about health, psychology, sexuality, and work. Having women write these articles differentiated the publication from its counterparts of the time. The existence of these wide-ranging articles on women at work, feminist education, and even knitting patterns provided a platform for questioning old ideals and an encouragement of new possibilities.

_Spare Rib_ boasted bylines from many women whom we now consider to be authorities in their field in the early stages of their career, like the groundbreaking feminist art historian Griselda Pollock, writing about the shocking amount of work by women artists stored in the basement of the National Gallery in London. Writer and activist Alice Walker made several contributions throughout the years and was featured on the cover several times. There were also features on musicians Tracy Chapman and Sinéad O’Connor, in the final issues of the 1990s.

But perhaps more important was the writing focused on personal narratives by regular women. There was an article written by mothers from Northern Ireland about the difficulty of socializing children in a public space while in the midst of (4), providing an important position on motherhood within current social contexts that had likely not been considered seriously before.

These perspectives by women readers from around England and beyond influenced the decision to make _Spare Rib_ a collective, and by 1973, the editorial masthead had switched from featuring its founders, editors, and production people, to a non-hierarchical model, which resulted in a collaboratively written editorial each month. These efforts were in the hopes of including as many female voices as possible, giving priority to women who faced setbacks in previous attempts in writing and journalistic pursuits.

But that’s not to say that _Spare Rib_ was a perfect publication. Very much a product of the 1970s women’s movement, it was not as widely devoted to intersectionality, the way a magazine with the same intent would be today. However, its failures are also its greatest strength. Its legacy is a bound archive of an evolving revolution, one that worked out its problems through publishing them. The comprehensive feminist themes of sexuality, race, religion and spirituality, and reproductive and mental health were all read through a British feminist perspective, which grounded them specifically and locally to a readership in the United Kingdom. Moreover, in the instances when _Spare Rib_’s circulation extended outside of the UK, it provided a new perspective, one that might have contributed to a wider global context for readers, while embodying for them a model of activist self-publishing.

In addition to twenty years of magazine publishing, _Spare Rib_ also published several books, most notably _Women’s Health: A Spare Rib Reader_ in 1988, which functioned as a British equivalent to America’s _Our Bodies, Ourselves,_ which had been released more than a decade earlier. In 2015, The British Library, home to _Spare Rib_ archive, announced an initiative to digitize all issues. They are now accessible to the public.

My time in London ended with a march in solidarity with the Women’s March in Washington, DC. After a turbulent American election season and similar anxieties in the UK post-Brexit, I found myself overwhelmed by the congregation of so many different people behind one issue. I had lost my faith in the possibilities of unity, but the legacy of _Spare Rib_ claims it back for me. It exists as an archive of the hard work of past generations that provide a foundation to build on today while being a testament to what still remains unfinished. It provides a model to create space for thinking women, something that continues to feel daring and radical. It’s a reminder of our responsibilities to ourselves and others: a call to action to continue to make room, to move our ideas onto the page and out to the streets. I’ve returned to the United States as “the new woman”: ready to make news, to get to work.

_Molly Davy is a writer. She lives in Brooklyn, New York._