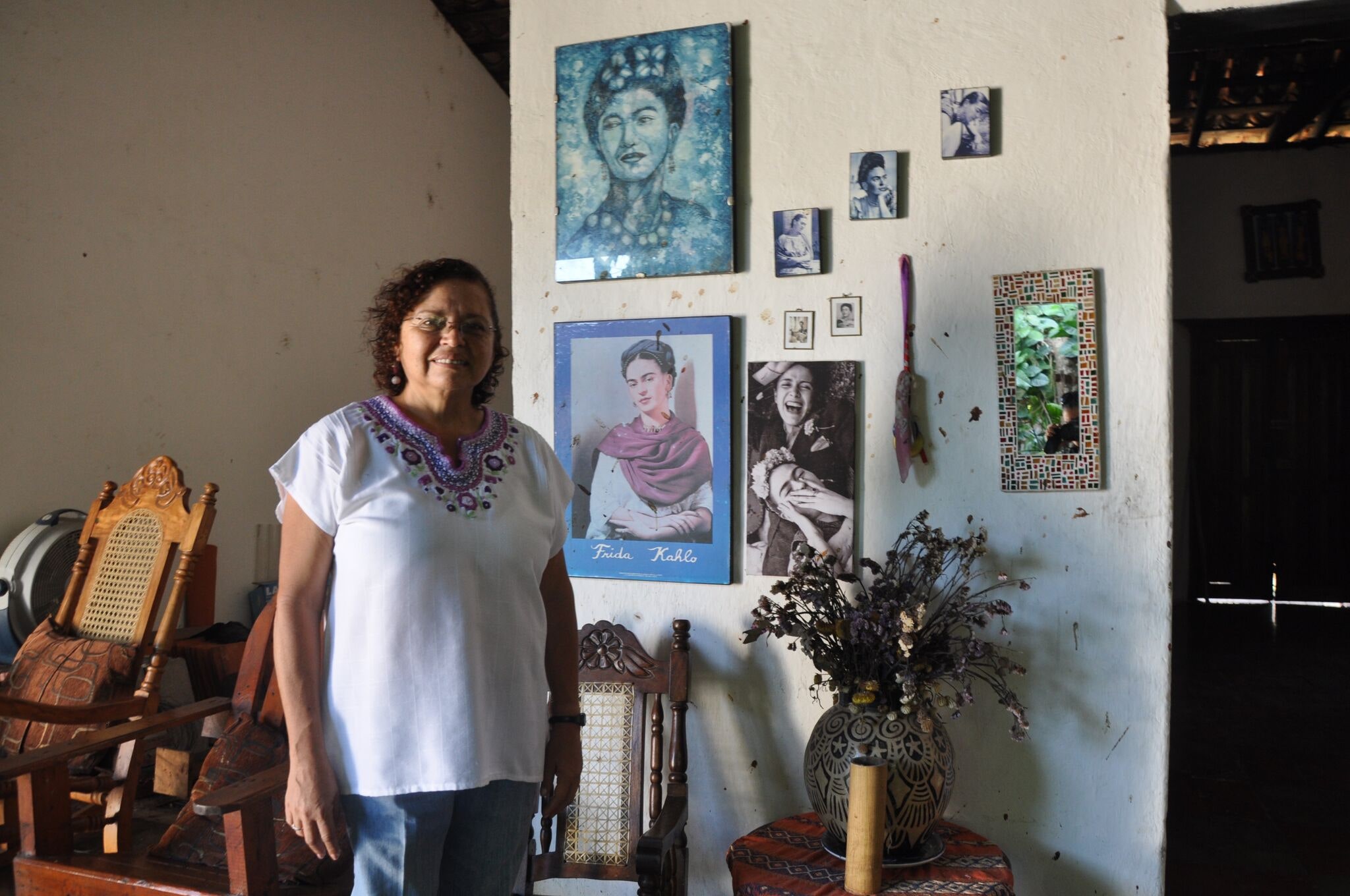 Thirty years ago, Morena Herrera was launching guerrilla attacks against a military-led government in El Salvador. She and her leftist comrades were incensed by an autocratic leadership that had ushered in sweeping inequality and a crackdown on civil liberties. As a commander and top military strategist, Herrera risked everything in a twelve-year war that left an estimated 70,000 dead.

Now the 60-year-old titan is fighting another war as the matriarch of the women’s movement in El Salvador. She is the founder of the country’s first feminist organization and the president of the Citizen’s Group for the Decriminalization of Abortion.

“I didn’t think I’d still be fighting for equality in 2016,” the curly-haired titan said with a sigh while lighting a cigarette at her home in Suchitoto, the country’s cobblestoned cultural capital. During the war, the town was nearly ravaged, and thousands fled.

Women were part of the country’s armed insurgency from its inception. Women made up around 30 percent of the members of the Farabundo Martí National Liberation Front (FMLN), a coalition of left-wing groups revolting against the government. Though the movement was hardly a feminist utopia, Herrera says the front gave women a sense of agency they had been denied in a society that saw them only as mothers and wives. Women proved to be successful guerrillas, as they were less likely to arouse suspicion and often went undetected when executing operations.

> Women were part of the country’s armed insurgency from its inception.

The civil war ended in 1992 with UN-brokered peace negotiations. An amnesty law was enacted, granting impunity to both sides for war crimes committed. FMLN transformed into a left-wing political party, which came into power in 2009. But many feel that the once-revolutionary group has been slow to tackle the country’s vast gender inequities.

“Some of us thought that as soon as the war ended, we’d all have rights,” Herrera said. “But we soon learned that the struggle continues.”

Plagued by inequality and poverty, El Salvador is the (4) in the world, per capita. The small Central American country has the (5) and one of the (1) in Latin America. In 1998, abortion became illegal and criminalized in all cases including rape, incest, and those in which a mother’s life is at risk (it had previously been legal if a woman’s life was at risk as well as in cases of rape and of fetal abnormality). The country’s powerful Catholic Church and pro-life lobby enthusiastically backed the new law and still wield significant influence among a vastly conservative population. On October 11, the FMLN introduced a bill in congress that would bring the abortion law back to its 1998 provisions. But without support from minority parties — many of which are conservative — the bill is unlikely to pass.

Herrera has been a perennial target for the country’s misogynistic vitriol. Over the years, she has received countless death threats and is vilified almost weekly in local media.

“They can try to hurt me all they want,” she said while walking to a local women’s center that she helped establish, the first of its kind. “Nothing scares me anymore.”

> “Nothing scares me anymore.”

When 33-year-old Maria Teresa Rivera was released from prison last May, she could barely recognize her twelve-year-old son.

El Salvador’s draconian abortion laws and the criminalization of those who assist with abortions have created widespread paranoia, if not a witch hunt, in which women who have had miscarriages or other obstetric emergencies are suspected of having abortions.

Rivera is one of seventeen women, known as ” (6),” who were sentenced to up to 40 years in jail following reported miscarriages between 1999 and 2011, most on charges of aggravated homicide because their fetuses were ruled as viable. According to Herrera’s Citizen’s Group, which has petitioned for their pardons, a total of 25 women are now in jail.

“In this country, the rich eat the poor,” said Rivera, noting that all the women who have been wrongly accused are lower-class Salvadorans. “We are forgotten.”

When Rivera was released, Herrera was at the courthouse waiting for her. She counts it as one of the happiest moments of her life. But the women didn’t celebrate for long. The country’s attorney general soon announced his intention to appeal the decision. Herrera and lawyers say there is a high likelihood that Rivera may be sent back to prison.

> When Rivera was released, Herrera was at the courthouse waiting for her.

“I grew up in orphanages,” Rivera said, with tears filling her eyes. “I don’t want my son to have the same life.

But outside Herrera’s vibrant network, there’s little sympathy for Rivera or others still languishing behind bars. At a recent rally for the country’s right-wing party, known as Arena, many harangued Las 17 and called for Rivera’s imprisonment, calling her a baby killer and murderer.

“When you have an abortion, you are committing aggravated homicide. You should spend up to 50 years in prison. Period.”

On a recent Friday afternoon, I visited Ilopango, El Salvador’s women’s prison, where most of the 25 wrongly accused women are serving time. I met 32-year-old Teodora del Carmen Vásquez, one of Rivera’s best friends while in prison, who has already served 9 years of her 30-year sentence. She delivered her baby stillbirth at nearly nine months.

“We have no rights,” Vásquez said as a prison official assigned to accompany journalists held up a voice recorder while closely monitoring the time. Inside the prison’s gates, Vásquez is known as “Helen” because when she first entered, she was afraid to use her real name for fear of assault or worse from inmates who had heard about her case and didn’t believe that she had miscarried. Prison doesn’t guarantee a safe space, with little tolerance among women for those who have had or been accused of having abortions. Luckily, Vásquez didn’t experience the harassment she anticipated, and she now tells her story to some, though she has still kept the nickname.

“When I get out of here, I want to study law,” she said, before retiring to a room shared by 22 women, some of whom sleep on the floor. Her family is so poor that her ten-year-old son can’t afford to make the three-hour commute from the countryside to visit her, so she sees him once a year. “I want to fight for us.”

“Look, I know how it feels to get pregnant and be scared,” says Herrera. She is the mother of four daughters, three of whom are from different fathers. During the war, three of her partners were killed successively, leaving her a single mother while on the battlefield. “Women need to have options, and they don’t.”Herrera says El Salvador’s strict abortion laws, coupled with an almost nonexistent national sexual-education curriculum, have fueled one of the highest rates of teenage pregnancy in Latin America.

Since 2000, Herrera and colleagues have unsuccessfully pushed for a sexual-education program. In 2008, the church blocked a manual for teachers, created by the education ministry, from being used to teach sexual health in schools.

“Our hands are tied,” says Mirian Gonzalez, a coordinator at the Ministry of Health, acknowledging that current laws and the country’s general conservatism often hinder the ministry’s attempts to provide education and access to women. “We have to follow the law.”

At a maternity clinic outside San Salvador, 16-year-old Rosa Esmerada Garcia restlessly tapped her feet while waiting for a medical exam. She’s due any day. When the teenager began showing, she dropped out of school. She says her principal beat her. Now, she sells tortillas with her family to make extra money. Last month, her boyfriend, the father of their daughter, abandoned her.

In the beginning, Garcia didn’t want to keep the baby. But she grew up in a staunchly Catholic family, and abortion was out of the question. She had heard about girls who had used misoprostol, a drug prescribed to treat stomach ulcers, to terminate their pregnancies (2)). But at $200, the medication was off limits to her, as it is to many others in a nation where the average monthly wage is $300.

“I’m happy now that I’m having a baby,” she said as she rubbed her belly, almost as big as her tiny frame. “But I don’t want her to have this life.”

Claudia Emera, a health worker at the clinic, says that 60 percent of the women who come to the center are teenagers, some as young as 13 years old. And of those, 20 percent actually want to be mothers. Herrera believes unwanted pregnancies have led to an uptick in suicides among teenage girls, a trend she hopes to stem with targeted workshops in several municipalities.

“They’re sad and, in some cases, depressed,” says Emera. “They don’t feel they’re in control of their own lives.”

> “They don’t feel they’re in control of their own lives.”

At one end of the center, draped in bamboo shoots and festooned with portraits of Frida Kahlo, a psychologist led a sexual-education workshop for teachers from across the country. Downstairs, domestic- and sexual-violence survivors gathered for a training on how to counsel fellow women who have endured abuse. (3) of all Salvadoran women say they have suffered some form of violence in their lives. (7) of these women were victims of sexual or physical violence.At the women’s center, Herrera shuffled between meetings while greeting the scores of women who come on any given day for workshops and camaraderie.

“This is a country where women are silenced,” said 27-year-old Christina Muria, who has been a counselor at the center for the past three years. “Poverty is high, and everything seems to be against you … Whenever I think about giving up, I just remember when I was ten and hiding in the closet as my mom was abused. I know I have to keep going.”

As Herrera walked down the hall, Muria reached out to hug her.

“She’s the reason we’re here,” said Muria, smiling shyly. “She first taught us that we can be more than mothers, than wives, than girlfriends.”

Herrera blushed and shook her head. “We’re all just sisters in the fight. I won’t be free until we all are free,” she said, still uncomfortable being in the spotlight even after years on the front line. “And that might not be for a while.”

_Lauren Bohn is_ (8) _Middle East correspondent based in Istanbul and the co-founder of_ (9)_.

Reporting for this story was supported by the International Women’s Media Foundation._