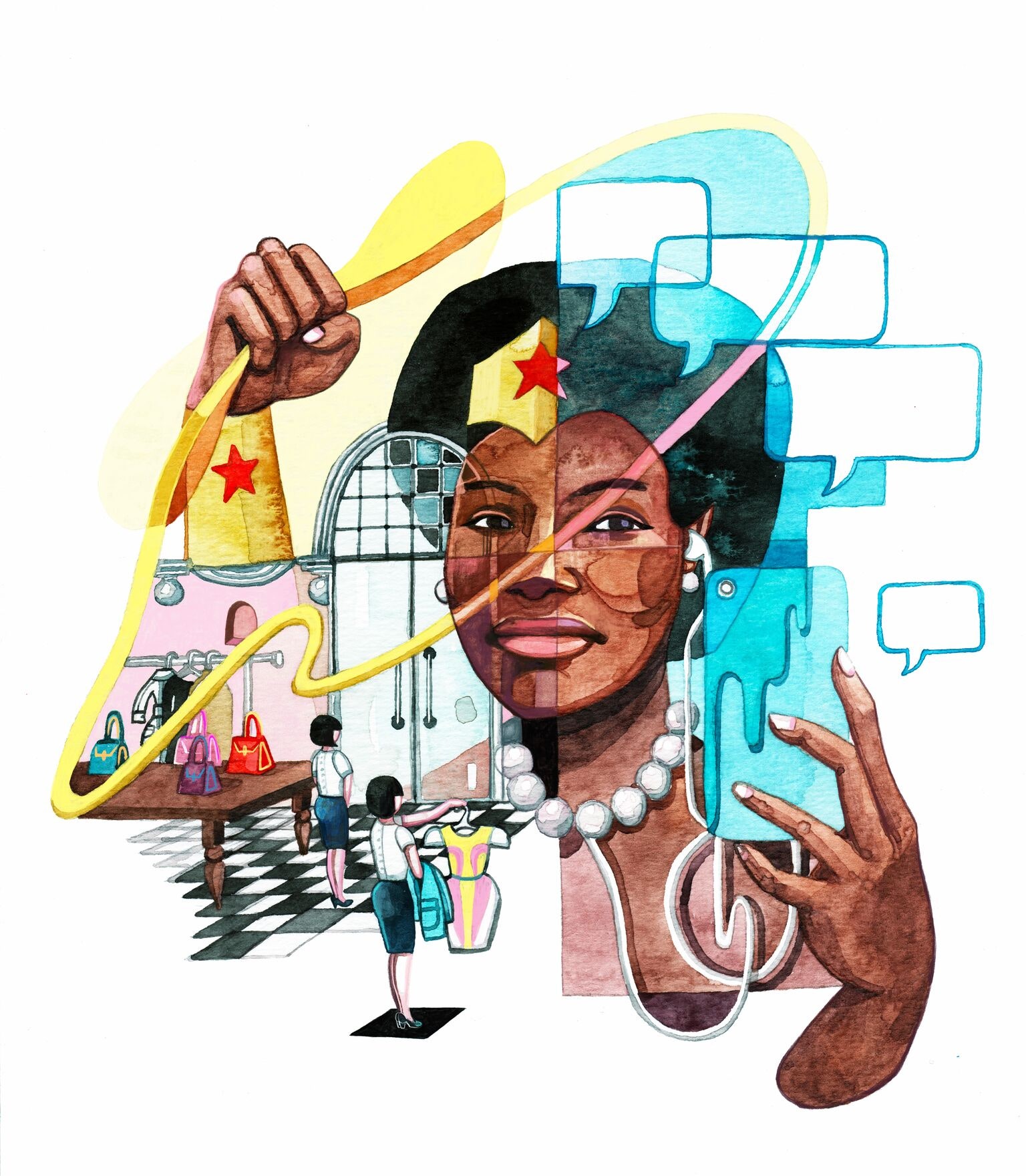 ​I excel at making people uncomfortable.

Early on at boarding school, I’d had enough of my roommate. She didn’t like that I woke up at 5 a.m. for ice-skating lessons. I didn’t like that she listened to Hall and Oates. She claimed that figure skating wasn’t a real sport, thus not worth disturbing her sleep for. I retorted by saying it was more of a sport than her beloved field hockey, which isn’t even in the Olympics, and that Hall and Oates would make shitty long-program music. (Forget everything you’ve seen on the CW, *this* is how privileged teens argue.)

Her complaints about sleep were more valid than mine until things escalated and she added that being black was not an excuse for also getting up earlier on weekends to do my hair. Which, she added, never looked “right” anyway. At that point, I decided that it was time for her to leave and made fast work of planning her exit from my life. I won’t incriminate myself with details, but it’s fair to say that by Christmas she had decided that a roommate who’d suddenly started practicing an invented amalgamation of Wiccan and Yoruba worship that involved fire and chanting in tongues was not ideal.

I excel at making people uncomfortable, both because I can reach Drake-versus-Meek levels of petty (see above) and because I exist every day as a black woman.

Earlier this year, Wyatt Cenac (3) about a fight over a racial joke he had with _The Daily Show_ host Jon Stewart, his former boss. The argument escalated in part because Cenac was attempting to do his best to represent his race while being the only black man in the room. Cenac’s comments ripped the curtain away from the secret a lot of us live with. Being (4) — the only black girl, the only Latina, the only Asian woman — in a room is a common reality but not one you’re supposed to talk about.

The realization doesn’t happen for us all at the same time; it can depend on the homogeneity of where you grow up, go to school, and eventually settle. But whether it’s being The Only One in your Brownie troop, or The Only One in your first real job at a tech firm, it’s an eventual American reality.

It hit me for the first time when I was still in school pondering the competition makeup my synchronized-skating team had purchased in bulk, in shades that flattered every girl on the team _except_ the only black girl. In a way, I’d already known the truth of the world, but this was confirmation. My long relationships with geek culture and various suburban-white-kid hobbies (like figure skating) mean I’ve long been used to being The Only One in a room. I know that before I can really begin to enjoy myself in a space, I will have to colonize it and terraform it to accommodate me.

Sometimes it’s challenging Western standards of professional beauty by showing up to a workplace with natural hair and shutting down awkward comments (“The city’s so humid today, we both have afros!” says a blonde with a slight frizz to her beachy waves) until your hair becomes unremarkable. Colonizing can be a teenager challenging her English teacher to include nonwhite voices in the curriculum so that her classmates have to at least _consider_ a point of view closer to her own. It can be a little black girl bringing (5) because that’s the music _she_ wants to perform to. For black women colonization is no more than making sure you can exist comfortably and feel acknowledged in a space — in other words, to feel no more and no less than just _human._ And yes, your humanity is going to make the status quo uncomfortable.

In the beginning, my method of colonization was to be Aggressively Black. Because comics and cartoons weren’t enough, during my sophomore year of high school I got really into online role-playing games. (If you’re wondering: no, I didn’t date until college.) If you’re unfamiliar with online RP-ing, picture a group of 10 to 12 women and one gay man who set up LiveJournal accounts for groups of fictional characters (I was partial to _X-Men_ games, myself) and write novel-length prose interactions between said characters. It’s exactly as uncool as you think it is.

> The realization doesn’t happen for us all at the same time; it can depend on the homogeneity of where you grow up, go to school, and eventually settle. But whether it’s being The Only One in your Brownie troop, or The Only One in your first real job at a tech firm, it’s an eventual American reality.

The games, players, and characters played were about as diverse as the comic-book industry from 2003 to 2011, which is to say, not very. There was a point when it seemed like I knew every black female player in the RP world, usually identifiable because we were the only ones who played black characters other than Storm. But for me, it went beyond just injecting visible color into games. I wielded Aggressive Blackness like a sledgehammer. Scenes meant to be simple interactions about cooking breakfast became tirades against the systematic oppression of people of color. Meet-cutes turned into deep discussions about interracial dating. Magneto’s entrance was a great time to remind everyone that said character was based on Malcolm X, that the X-Men were a metaphor for the struggles of the civil-rights movement, and that we wouldn’t even be playing this game if it weren’t for black folks in the first place.

Online RPing lost its appeal once I started getting laid on a regular basis. This coincided with an interest in costume design and subsequent appreciation for high-end clothing. As an adult, there are days when I just need the release of taking a selfie wearing something pretty in a store dressing room. Watching validating “likes” come in from strangers on the ‘gram is better than a Netflix binge after a disappointing day. Shopping was my new hobby, and high-end department stores and boutiques were landscapes ripe for colonization.

Since just being black inside a New York City boutique is an open act of rebellion (1)), I quickly learned that sometimes Aggressive Blackness is no more than existing in a space as a black person. To colonize was to do nothing more than to force them to accept my presence. I could inflict discomfort by entering a store and browsing the racks.

I enjoyed the hitch of breath sales associates would take when I handed over my card to pay for something they were obviously worried I wouldn’t be able to afford. I snickered while listening to them walk back and forth between the rest of the store and the one dressing room I was occupying to ask for the tenth time whether or not I needed any help. I stay young by both virtue of melanin and the smug satisfaction I get from the unnecessary struggle people will go through to “subtly” follow a young black woman and the Tibi dress she’s carrying through a store.

It’s an odd existence to have my carefree hobbies require so much effort. Deciding not to steal the merchandise isn’t enough. I have to decide that I’m going to put up with an institutionalized bias — not just put up with it, but be able to laugh at it to make it through. Being followed around a boutique won’t be the first racist thing to happen to me during a typical 24 hours in New York City. When I step outside, I’ll face racialized street harassment from black men. I’ll give directions to a European tourist who wants to “eat black food” up in Harlem. I’ll check Twitter on the bus and see yet another tragic story about a questionable black death by someone in a position of authority. I’ll probably answer an unsolicited question about my hair. I’ll ask myself whether those two cops on the subway platform look like they have an ax to grind and if it’s safe to be standing too close to them in case things pop off.

This is all _before_ I get inside Saks.

I recognize that the spaces I’ve mentioned — attending a boarding school, having time for a nerdy pastime, shopping in high-end department stores — are spaces of a certain amount of privilege. It’s privilege, economic in this case, that I won’t deny having, but the privilege to access these spaces coexists with my presentation of black womanhood. So if anything about my blackness or my womanhood freaks you out, I’m going to delight in it. If I can do anything to make my presence the status quo rather than an aberration, I am going to try. If I can leave a space better off and more open to the presence of the black women who enter after me, I will.

I excel at making people uncomfortable, and I’ve gotten good at turning that to my advantage. But every black woman shouldn’t have to be me. Who wants to be The Only One, a lone explorer and colonizer, _every single day_ ? We shouldn’t have to enter our hobbies with loins girded, shields up, and a chisel ready to carve out a space for ourselves. If I’m going to gird anything while I shop (loins included), I’d like to gird it in Dior, please, preferably from within the private dressing room where “overly attentive sales associate” means nothing more than a person who asks “Another Champagne?” far more often than is necessary. It’s not that I want to live a dream—I just want to live and be treated like everybody else.

_Kendra James is a race and pop-culture blogger from New York City who spends her days in prep schools, her weekends at Racialicious, and her nights complaining_ (2) _._