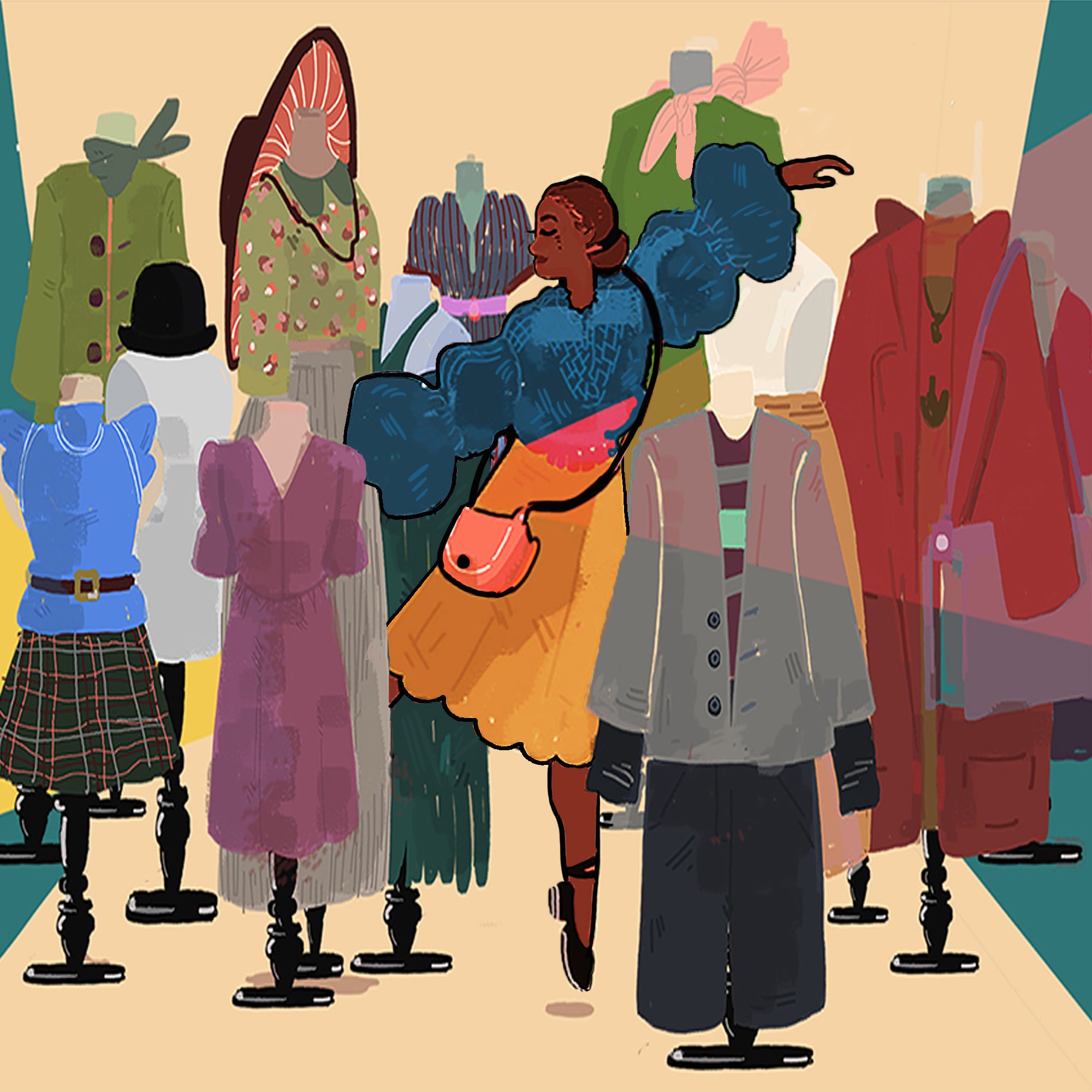 “I decorate with American girls in mind!” my host mother had said when I arrived in Paris. A teddy bear smiled inanimately from the shelf of an otherwise empty bookcase. I stared at the lime-green curtains, butterfly-patterned carpet, and twin-size bed with its rainbow-polka-dotted duvet. The room filled me with *malaise* — one of the few French words I could pronounce three months after my arrival in Paris, despite my efforts in Elementary French I. (Other phrases I could say included *“Avez vous le mot de passe du wifi?”* — “What is the Wi-Fi password?” — and *“Je voudrais un sandwich”* — “I would like a sandwich.”) For the 84th night in a row, the teddy bear’s plastic gaze met mine. I had to escape.

The means for my reprieve were obvious: I needed to buy a sweater. The thickly woven, simply cut, and undeniably tasteful sweater that had caught my eye earlier that week. It was so quintessentially French that I knew, with a conviction as deep as the knit’s rich shade of navy, that purchasing it would cure my angst. I checked the time on my boxy international Nokia cell phone. It was 18:45, which by 18:46 I understood to mean 6:45 p.m. There were fifteen minutes to the store’s close, and if I ran I could make it. Like a character in a bizarre cross between *Mission: Impossible* and *The Dreamers*, I pulled on a long wool coat and sneaked out into the misty Paris night, breaking into a sprint across the slick cobblestones. Sweat glazed my forehead like the sugar coating on a *tarte aux framboises*. I checked my phone every few strides — 18:51, 18:52, 18:53. Finally, at 18:54, my destination came into view. A big window, golden-lit, a tall woman in all black hanging items on a rack. Three glowing letters designated my panacea: COS.

I burst through the glass doors, ran to the back of the store, and grabbed the sweater I had been thinking about for days. The heavy wool felt substantial in my clammy American hands, and as I handed the sweater to a chic cashier, my months-long case of melancholy lifted, if only for a moment. Sturdy paper shopping bag in hand, the tissue-wrapped sweater within, I emerged from COS unsure of how to get back to my home stay. But it didn’t matter. My purchase was a triumph: for 50 euros I bought a respite from homesickness, an item that would appreciate in nostalgic value over years to come. One day, I calculated, it would symbolize the wonderful time I had waltzing through the streets of Paris, speaking French easily, eating baguettes and drinking bottles of wine by the Seine, all the while dressed the part of the American girl in Paris.

Seven years later, I still have the sweater. I remember the absurd evening I ran to buy it, and — as pathetic as it seems to me now — enjoy recalling the delusion that a sweater had the power to make me feel more French and less homesick.

As I’ve started to put my summer clothes away for the year, I’ve been thinking about the fantasies that fall clothing can conjure. Try as the J. Peterman copywriters may, a pair of shorts will never have the nostalgic value of a favorite sweater or coat. After months of bikinis, putting on fall clothing is a bit like donning a costume. The herringbone blazer that’s been hanging in the back of my closet becomes the necessary ensemble for a day spent studiously writing in the stately Dewitt Wallace Room at the New York Public Library on 42nd Street. The black pleated leather miniskirt, unworn since February, is the right after-work outfit change for getting martinis at the Odeon. While these items don’t display the extravagance typically associated with costumes, they’re the perfect end-of-summer pieces for channeling a more cinematic version of myself; they infuse mundane daily activities with a sense of dramatic potential.

I’ve always thought it was embarrassing to imagine one’s life like a movie, but in the fall I do so despite myself. Maybe this is why the clothing in autumnal movies is so appealing. Take the ultimate ’90s-chat-room-intrigue, Tom Hanks-in-a-turtleneck, New York-in-the-fall movie *You’ve Got Mail.* Sure, the romantic-comedy plot, in which Meg Ryan ends up happily ever after with the guy who just put her bookstore out of business, is outdated, but the movie’s frumpy-yuppie clothes feel just right. In one of the opening scenes, Meg strides down Broadway, passing green benches, trees with orange leaves, and shopkeepers opening the metal gates of their storefronts. You can practically smell the fall air. When she stops to buy a pumpkin (of course), we get a better look at her outfit: a brownish tweed skirt, opaque black tights, a practical black wool jacket, and a striped scarf, paired with a minimalist bag and black oxfords. Has anyone made Gap look more like Jil Sander? The ensemble is how I envision sensible ’90s New York dressing, with streamlined apparel in dark colors that won’t make you paranoid about spilling coffee on yourself on the subway. It’s a staid and smart style that I feel nostalgic for, even though I was only seven when the movie came out. Meg’s whole look says, “Don’t you just love New York in the fall?” — in fact, she says exactly that in the next scene.

Wes Anderson’s *Rushmore* is another one of these movies. Set at a prep school, the English teacher Rosemary Cross (Olivia Williams) wears a series of pastel and gray sweaters that look like they were accidentally put through the wash. These hand-me-down cashmeres are the epitome of preppy insouciance. They call to mind leaves crunching on a tennis court and the damp, smoky smell of a bonfire pit. I imagine her unpacking them from summer storage and laying each one out the night before she wears it. She pulls her hair into a brushed-back ponytail and punctuates the look with a cigarette, at odds with her otherwise sporty, clean style. Rosemary is the love interest of a precocious teenage boy, Max Fischer (Jason Schwartzman) — not exactly an enviable position — but she’s also the beautiful, aloof older girl. She’s the kind of bookish yet intimidating character who can send you away with a bored eye-roll, and who makes cable knit look like an essential of power dressing. It’s the perfect incognito costume (she’s dressed up without anyone knowing it), and a subtly striking ensemble that I’ll wear this fall when I want to feel commanding.

And then there’s *Jules and Jim*, full of fisherman sweaters, angora, corduroys, and capes. It’s the kind of movie that’s in your head even if you haven’t seen it — surely the famous scene when the trio of actors (Jeanne Moreau, Oskar Werner, and Henri Serre) race across the bridge was in my mind when I ran through the streets of Paris to buy my sweater. Though Catherine (Moreau) wears beautiful, feminine clothing throughout the film (soft knits and blouses adorned with velvet bows), it’s what she’s wearing in the bridge scene that captures my imagination: a floppy plaid hat, an oversized ribbed sweater, and a pair of loose wool pants with lace-up leather boots. Jim draws a thin mustache on her face to complete the jaunty look. As they race across the bridge, Catherine laughs and laughs and, as she approaches the finish line, throws her hands in the air and laughs some more. She’s having the run through Paris that I had wished for — a grand, carefree show of joy and delight, the way Paris always seems to invite in the movies.

The fall clothing of these three films is simple: solid sweaters, black tights, corduroy pants. (I can imagine my COS sweater making an appearance.) In their plainness, the pieces become the perfect agents of nostalgia, whether the characters who wear them are enacting something you’ve actually experienced or not. The clothes are adaptable. It’s like when your mother tells you to wear a solid because it “puts the emphasis on your face.” The uncomplicated clothes in these movies provide the form, like a blank movie screen, which can be filled with whatever you project from your own life.

Nostalgia itself is like that. Often the times we miss the most didn’t happen as we remember them — like that night in Paris, it turns out. A friend who was also in Paris at the time reminded me that there hadn’t been a COS near my apartment, but I had gone to the one in the center of the city. My memory was wrong. To make it to that store on foot, I would have had to run for fifty minutes — impossible for anyone as exercise-averse as me. The truth was that I took the metro most of the way, and maybe ran for five minutes after getting off the train. The memory became less *Jules and Jim* and more a boring tale of retail therapy (the unremarkable kind you might find in Tom Hanks’s chain bookstore in *You’ve Got Mail*). And yet I’ve remembered my sweater journey the other way for so long, it might as well be real.

*Hilary Reid is a writer based in Brooklyn and works for New York Review Books.*