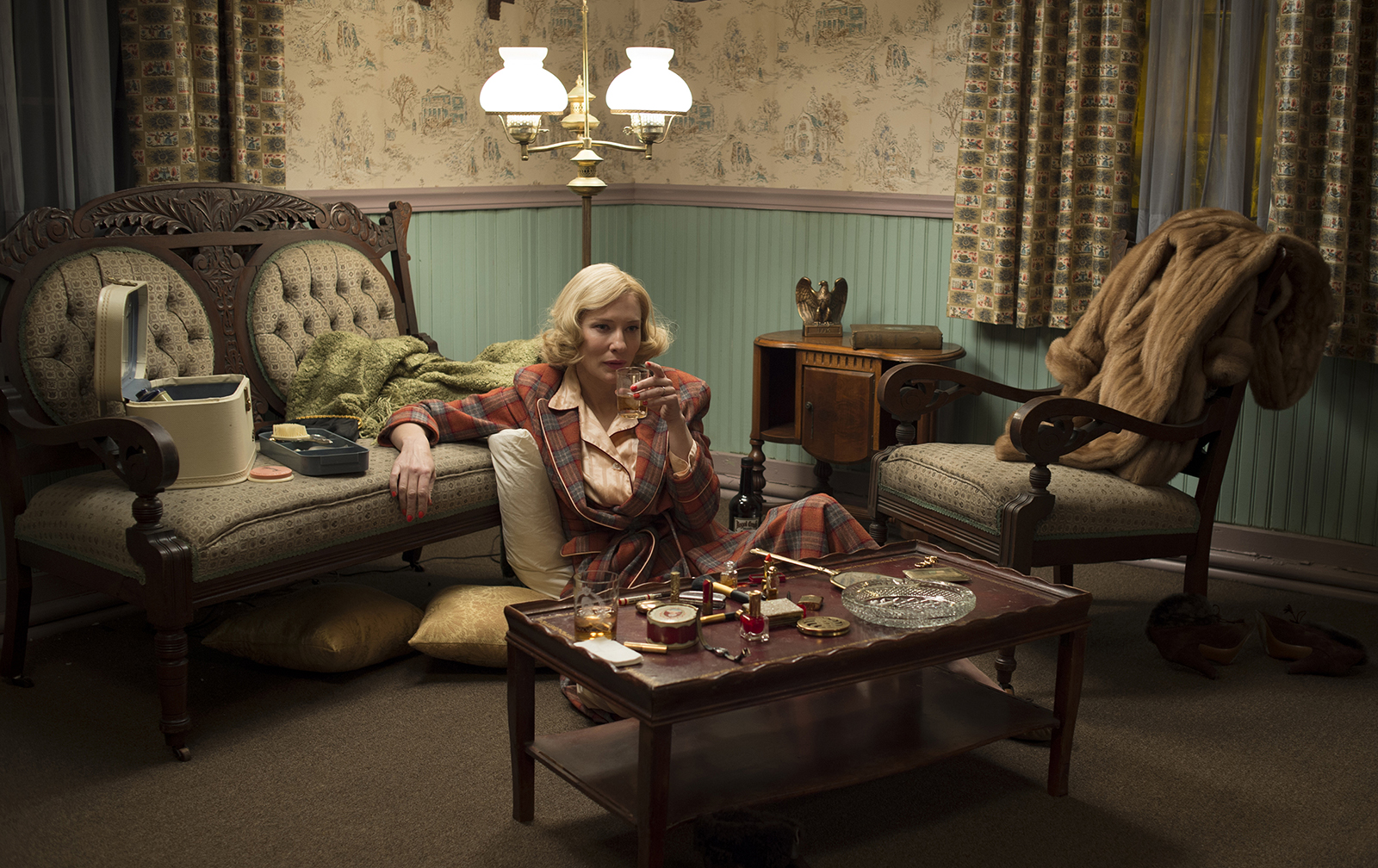 Todd Haynes’s new film *Carol* — opening November 20 in the U.S. — is more straightforward and more hopeful than anything the genre-bending queer director has made in his nearly two decades of filmmaking. The film follows Carol (Cate Blanchett) and Therese (Rooney Mara), tracing their cautious, circuitous movements toward each other during the anxious McCarthy era of the early 1950s. Unlike Haynes’s first major release, *Safe* (1995), which engages tropes from sci-fi, horror, and melodrama to unnerving effect, and 2007’s *I’m Not There*, in which six actors (including Blanchett) portray different facets of Bob Dylan, Carol can come across as almost ordinary. But its mundanity is a source of its political power, since its depiction of a kind of ordinary love turns out — even still — to be politically radical.

While Haynes’s movies tell stories of individuals, he actually isn’t much interested in individuals — that is to say, paragons of personal agency who are basically independent from the world around them; the kinds of (usually male) protagonists we often see on-screen. Instead, Haynes shows us the various ways that individuals suffer under the weight of the world and the different ways that weight lives within us, often right in our bodies.

For instance, in *Safe*, the main character, a subdued suburban-California housewife, begins to develop inexplicable physical symptoms, and she withdraws from her life to join an isolated wellness commune. In *Superstar* (1987), a deeply moving biopic about Karen Carpenter with all the characters played by Barbie dolls, Carpenter becomes severely anorexic in an effort to achieve some minor control over her increasingly controlled life, an effort as painfully self-destructive as it is perversely effective. And in *I’m Not There*, Bob Dylan is shown to literally take new corporeal form throughout his life, as though each new phase called forth a new person from within him.

What makes Haynes’s films so subtle and challenging is that these bodily experiences are presented not only as modes of passive suffering but also as modes of resistance. This active resistance is seen especially in the way that gender and sexuality are reimagined by the characters in *Velvet Goldmine*, a vibrant yet melancholy musical homage to glam rock, an electric moment in the history of youth culture that is shown to celebrate queerness and gender nonconformity while it continues to subtly police them.

In all his films, Haynes turns again and again to women — whether women by birth or identification or social designation — as a site where the forming and deforming force of the world is most powerfully seen and felt. He tends to focus on mid-20th-century women of social standing and means, white women hovering around the middle class (often thanks to the positions of their husbands), women who seem to have about as much opportunity and personal freedoms as they’ve ever known. Julianne Moore’s characters in both *Safe* and *Far From Heaven* have every financial and material comfort, the whole world apparently organized precisely for their easy, pacified enjoyment.

Yet Haynes presents these women as trapped. He frames his characters in cloistered interiors where they’re unable to take up space: positioned to the side of a shot, all but edged out of sight and existence; or, recalling Moore’s thin, breathy voice, coughing fits, and panic attacks in *Safe*, as unable to speak or take a breath at all. The worlds of Haynes’s women are worlds to be suffered and endured. He very rarely shows a way out of these worlds, and when he does, it is revealed to be a false freedom, another trap.

|||COURTESY OF THE WEINSTEIN COMPANY|||

*Carol* is a departure from these false freedoms. The film is continuous with all of Haynes’s films, which show his characters’ often-flailing efforts to survive their oppressive worlds. But, for the first time in Haynes’s work, the world of *Carol* is not fully closed: there is space for a new kind of love and a hope for what might still be possible. This hope is not unchallenged, of course. At times, Carol and Therese’s relationship seems fated to unravel, thanks to the pressures of bigotry, rehabilitation psychiatry, and punishing ex-husbands, and to more internal forces like past pains, pride, shame, and sheer exhaustion. But they are not defeated, and each woman learns why it is not worth “going against her own grain” to placate the world, as Carol puts it to a man who cannot understand.

*Carol* begins with a close shot of a subway grate: it’s a pattern and a barrier, something that both exhibits conformity and obstructs sight and movement. The first human being that the camera connects with is a casually confident young man navigating New York’s sidewalks, dividing the crowds through which he moves with ease, embodying that remarkable combination of authority and oblivion enjoyed by only the most privileged. Though *Carol* is a film about women, it begins with a man in what is unmistakably *his* world. We follow behind him as he enters a dim restaurant, orders a whiskey, and notices — and then interrupts, naturally — two women drinking tea, facing one another, each locked into the other’s presence: Carol and Therese.

The book on which *Carol* is based — Patricia Highsmith’s moody and sensuous T*he Price of Salt*, published in 1952 under a pseudonym — was celebrated by the queer community, of which Highsmith was herself a member, for finally telling a gay story with a happy ending. People wrote her letters, thankful for a story that was at once optimistic, realistic, and radical. And the political radicality of such a happy ending is no less striking today.

Throughout the film, the most charged moments shared between Carol and Therese are also the smallest: talking about trivialities, having tea together, driving in a car. But in this world and at this time, two women in love having tea together becomes a public political act, and two women on a road trip become two women on the run, from the law and for their lives. Consistent with his tendency to use and distort genre conventions to tell new kinds of stories, Haynes has described *Carol* not as a love story, but as a suspense film. There is an anxious energy that guides it, sometimes exhilarating, sometimes suffocating; both the protagonists and the audience are ready at any moment for their world to break apart in pain and disappointment, while all the time striving to believe that they will somehow find a place to finally and simply be with one another.

The film ends with two magnificent shots: Therese walks into a restaurant and looks at Carol, who is no longer something impossibly out of reach but someone she has chosen to step toward and even to love. And Carol looks back at her, her face fully alive to what she looks at, registering surprise at first, then softening into understanding, then affection, and finally — exhilaratingly — happiness. In this dizzying shot, Carol looks directly into the camera, and so out to us, welcoming, daring us to believe in something more and new, a promise of something personal and political: that another world is possible, that this world might be different.

*Francey Russell writes about art and film and is a PhD candidate in philosophy.*