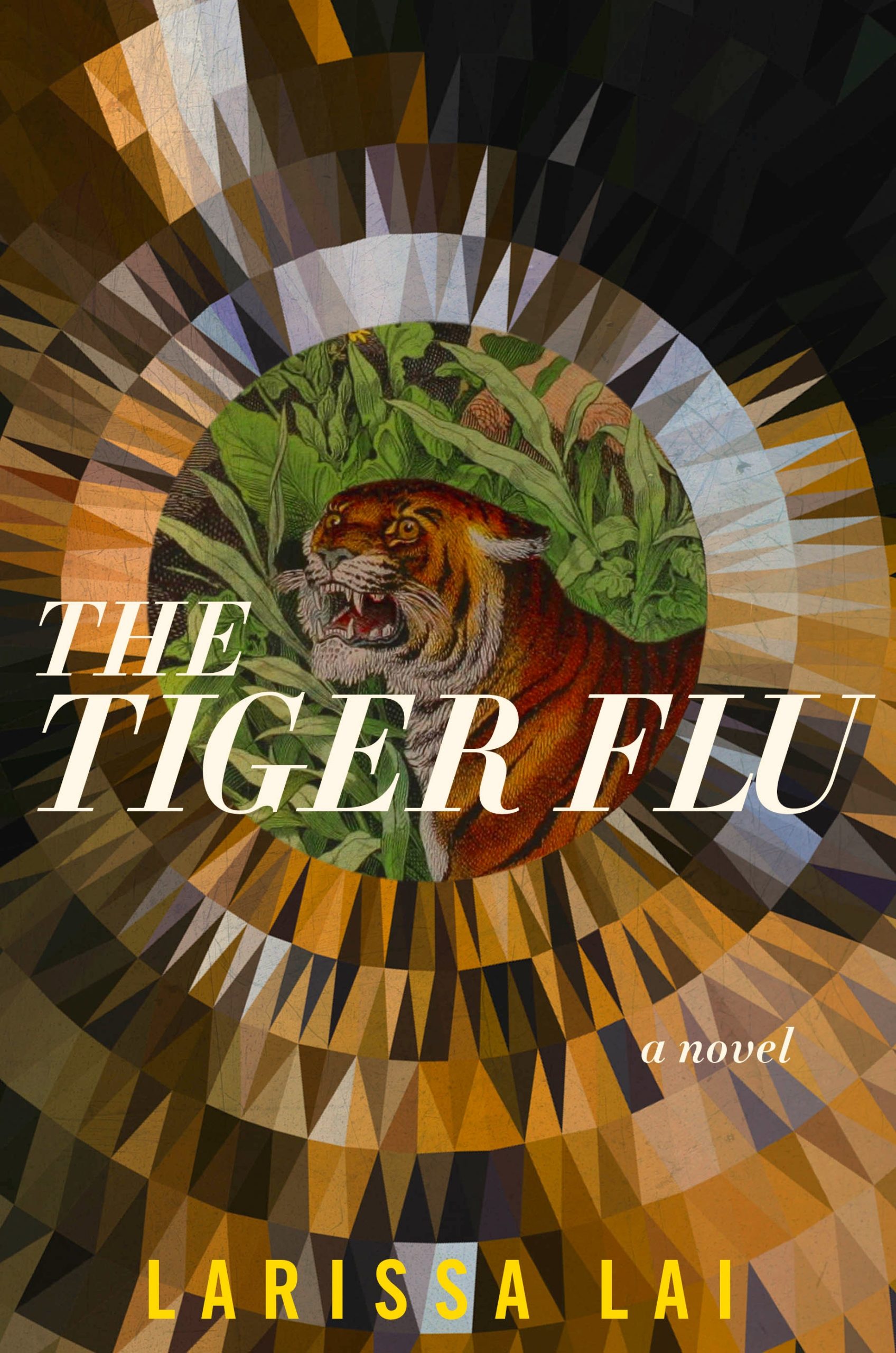 Behind the clouds of the new monsoon, the ancient mainframe Chang rolls too fast across the sky. He’s a big guy, but he appears much bigger than he should because his orbit is deteriorating. His period is down to two hours now, and he casts a veiled shadow over the rooftop of the old Woodward’s Building, engulfing Uncle Wai’s carefully cultivated garden.

Kora leans against the fence that holds old Delphine in her pen. Stares mournfully into Delphine’s golden eyes.

“Uncle Wai’s got it,” she tells the goat.

The tendril information scales Kora’s got plugged into the single-band halo that circles her head wave gently. For all Chang is so close, the people of Saltwater Flats don’t have access to him anymore. Only the citizens of the glass towers in Saltwater City can tap in. As soon as she can afford it, she’ll add rings to her halo, or even a full helmet, so she can get wiser quicker. She needs all the help she can get.

“Uncle Wai says that so is big brother Everest, though I’ve never met him. If he comes back to us, he could save us. But I don’t think he’s coming back.”

“And Charlotte’s got it.” Kora never calls Charlotte Mom. It seems too corny. “Women aren’t immune you know, Delphine. If they’re hungry enough, if they’re depleted enough, women can get it. If Charlotte’s got it, that means I’m the only one left in our family who doesn’t have the tiger flu.”

“Don’t be like that.” Kora knows Delphine cannot actually understand her grief and dread, but still, the tendril scales atop Kora’s head droop.

She scratches the old goat between the eyes. Delphine’s hair is pleasantly coarse, and her forehead is warm. “Soon it will be you and me against the world.”

Behind Kora, the jars in which Uncle Wai grows potatoes lean against crumbling retainer walls. The jars are huge, each one big enough to hold Kora, her goat, and a couple of tigers too. Forty floors below those walls, in the streets of Saltwater Flats, women—young and old, healthy and ill, happy and sad—go about their daily business, shop for a bit of chicken for supper, a few vegetables, a bicycle, a second-hand cake mixer. A wealthy few rest in quiet cafés, sip tea, and eat steamed buns. Others stand on street corners arguing. There are no men in the streets. The men are shut up in houses, covered in lesions and coughing their lungs out, the nasty and condescending beside the gentle and well intentioned. Or else, they are already dead. Except for the tiger men, a small contingent of male survivors who have the flu in all its contagion but whose symptoms never proceed beyond a modest cough and the occasional lesion. Miraculously, they thrive in the privacy of the Pacific Pearl Parkade, doors closed to the world.

Although the tiger flu has a taste for men, it doesn’t discriminate against the wealthy. In fact, the first to succumb to the fourth wave was the hated despot Aloysius Chow-McPherson. The citizens of Saltwater City rejoiced, as did the denizens of the surrounding quarantine ring known as Saltwater Flats. Then Chow-McPherson’s kindly brother, Ferdinand, took ill. The people still rejoiced, because, though kind, Ferdinand was a high-ranking member of a despotic family. The family company, HöST Light Industries, ruled the city in its own best interests. Chow-McPherson’s wife, Sophia, took charge. But she too got sick. Then his daughter, Isabelle, took over. As Kora is all her family’s got, Isabelle is all the city has got. She better be enough.

Far behind Chang, the backup mainframe Eng rolls in her expanding orbit. If Isabelle could open diplomatic channels with the Cosmopolitan Earth Council, which controls the last remaining rockets outside the United Middle Kingdom, perhaps they could be convinced to help right the orbits of Chang and Eng. Otherwise, Eng’s elliptical orbit will only deepen, and soon hundreds of years will pass between sightings.

Delphine lies down in her bed of straw. “See you tomorrow, sweet goat.” Kora places her hands on the highest rung of the fence, hikes herself up so she can lean in and plant a kiss on the goat’s rough forehead.

Something rustles behind the shed. She drops her feet back to the ground.

No answer. She goes to look, but before she’s taken half a step, a young man leaps out and grabs her from behind. “Boo!”

“Mother fuck! Get off me! Who the hell are you?”

Actually, she recognizes him. He’s a friend of her brother’s—Stash Sacks. He looks awful. His face is covered in weeping sores. His eyes ooze pus.

“What happened to you? How did you get up here?”

“K2 gave me the keys. We lost our jobs this week because we’re too sick to lift the elk at the abattoir.”

He grips her tighter, nibbles her ear.

“You don’t want me to hug you anymore?”

“Stash, I would rather hug a Grist sister. Let go, really.”

“Dirty Kora Ko,” says the boy. “There’s no such thing as Grist sisters. They’re just a story told by scared old men.” The bear hug from behind turns aggressive.

“Let go of me!” Her scales writhe.

“When I wasn’t sick you liked me just fine.”

“The last healthy member of the Ko family.” He leans in, licks her face with his white tongue.

He bites her cheek hard enough to break skin.

“Trying to give me your disease?!”

He’s fierce, but he’s thin, even thinner than Kora. She might be hungry, but she’s tough as an old shoe, whereas he’s pale and wasted. She kicks a foot out from under him.

“Little whore! What did you do that for?” He pulls her to the ground with him. Rubs his face into hers, tries to stick his tongue in her mouth.

Gripped by jealousy and desire, he won’t let go. On the battered concrete floor that once kept water out of the apartments below, they roll over one another, closer and closer to Uncle Wai’s potato jars and the crumbling wall. They’ll go over the edge if they aren’t careful. Kora throws her weight in the opposite direction, towards Delphine’s pen. She’s heavier than Stash. Back they roll. Her weight on him makes his heart pump. He finds fresh strength. Towards the wall they turn again.

“You little shit! I’m going to beat the fuck out of you.” Kora won’t be defeated. She jams her shoulder hard against his and forces their momentum back Delphine’s way.

Rage grips him, makes him superhuman for a moment. They spiral furiously into a jar. It tips over and hits the wall. Fragments of loose concrete clatter to the ground forty floors below. The wall gives. The jar crashes overboard and smashes onto the sidewalk.

“I’m not gonna die just ’cause you are!” She forces him back, and they roll all the way to Delphine’s fence. The old goat bleats panic.

“It isn’t fair!” He pushes on top of her again. Rolls her towards the brink as she attempts to pull her arm free to punch him. Here’s the edge. There’s no wall to protect them. Holy shit, holy shit, they’re going to fall! Over the ledge they go. Kora grabs a coil of loose rebar. The sick boy clings to her waist. “I don’t want to die!”

She could kick him in the belly and he would plummet.

She feels the temptation. Her arm begins to quiver. She can’t hold their weight for much longer. She has to decide now. She hoists them both back up to the safety of the rooftop garden.

“You little fuck!” she hisses.

The monsoon clouds burst open and shower them.

Stash trembles, flat on his belly beside her. Gets ahold of himself and gives her a crooked grin, half-malevolent, half-teasing.

“Piss off,” Kora says. “I don’t care if you are my brother’s friend. You’re not welcome in my house.”

*Larissa Lai is the author of three novels,* (1), When Fox Is a Thousand, *and* Salt Fish Girl; *two poetry collections,* sybil unrest *and* Automaton Biographies; *and a book of literary criticism,* Slanting I, Imagining We. *A Canada Research Chair at the University of Calgary, she directs the Insurgent Architects’ House for Creative Writing. She grew up in Newfoundland and feels at home in both Vancouver and Calgary.*