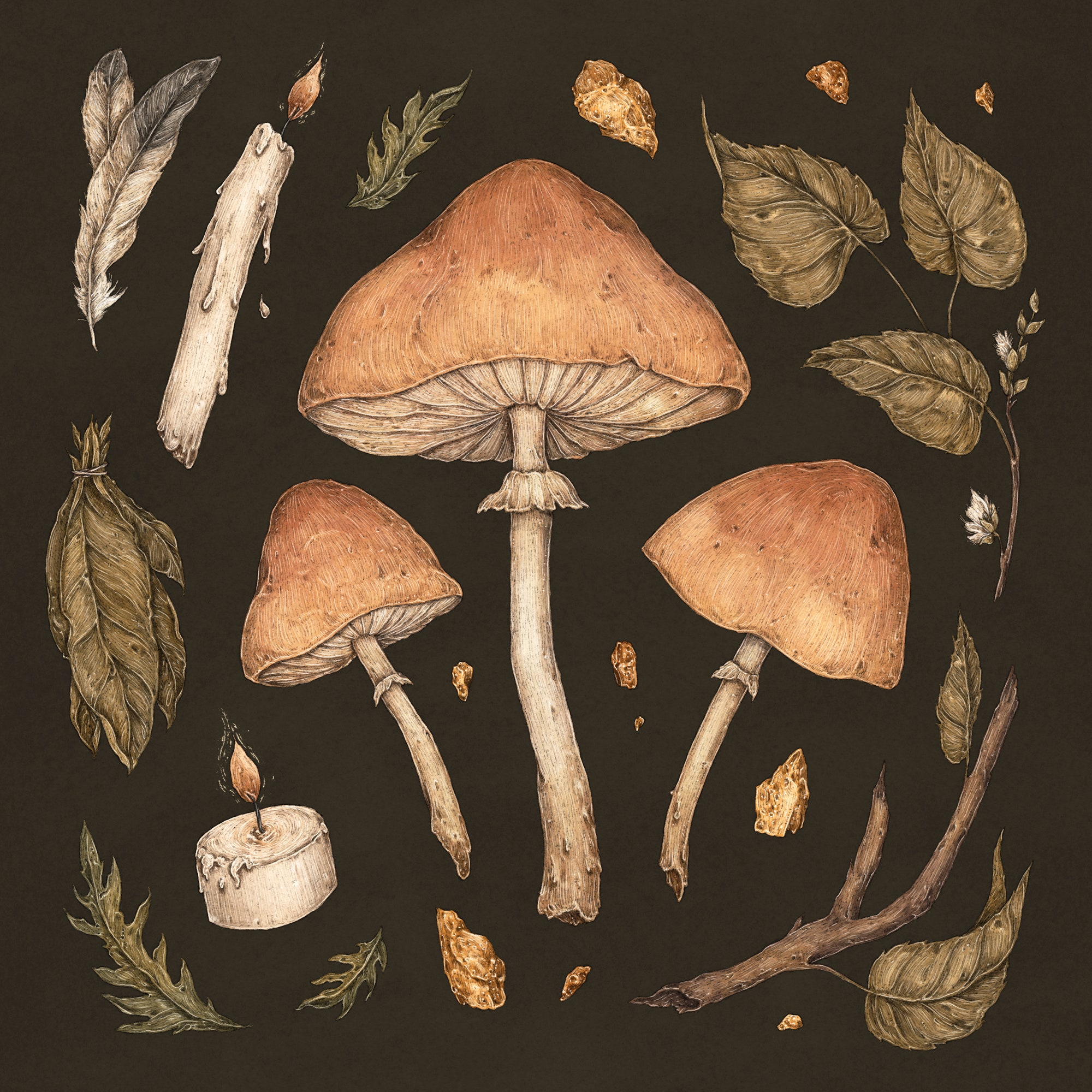 I ate mushrooms for the first time at age fifteen, with a pale and haunted girl who wandered into my life for only this purpose, then disappeared. We walked under the full moon through crumbling Greek architectural structures in Montecito, California, kissed for a short while like Victorian ladies. It was everything one would want from a first-time experience. I went to sleep blissfully, having visions of insects and dirt, tears streaming down my face in gratitude.

The next day I had plans to visit a juvenile-detention center, as part of a teen-outreach program. The volunteers gathered in the parking lot outside. While we were standing around I told the head facilitator what I had done the night before, that I had eaten mushrooms with a girl and it was beautiful. She fired me on the spot. I waited in the car, sobbing hysterically, while the rest of the group was inside for nearly two hours. I loved the teen-outreach program, and also loved the facilitator, a 28-year-old woman whom I was having a scandalous sexual relationship with. She broke my little mushroom heart.

It’s possible that, without meaning to, I associated that traumatic experience directly with mushrooms. They didn’t come up in my life at all until fifteen years later, in a tiny coal town in New Mexico.

Greta had a shop that sold candles, blown glass, handmade ironwork, and antiques. She had red hair and wore leather pants and seemed to really like me. We talked in her store a lot on my frequent visits. Once we got in full gossip mode, we couldn’t shut up. When parting, it was always with the promise that we would eventually get together for a real hangout.

One day, she casually mentioned, “Sometimes I take a little bit of mushroom before work. I’ve been doing it every few days for a while. It makes the tourists a lot easier to handle.”

She said this putting no more weight upon it than she did anything else. It completely freaked me out. In one beat, her homey little witchy shop became a drug den. The candles suddenly looked dirty, the stained glass mediocre and sad. The figurines made of car-metal scraps and the woven shawls were now all detritus of a wayward hippie life. I made up a lie about forgetting an appointment and left. I never went back there again.

(Ironically, I now run a store in the same coal town, selling psilocybin-mushroom T-shirts, LSD pendants, and psychedelic pencils with the names of entheogenic plants on them.)

Psilocybin mushrooms returned to my life for good through the body of a dying cottonwood tree. It was during a very difficult time in my life, before a horrific breakup. Sophia came over to cut the branches that were dangling over the house. She was something to behold up there, with her piercings, her strong, square body. Sophia didn’t even use a ladder. She hoisted herself up with ropes and cut the branches down with a small chainsaw.

“I know this is a really random question, but do you have any magic mushrooms?” I asked. It’s the nature of the body to move toward healing, and this request came from a primal, yet-to-be-visited place in me, the way one might ask, *Do you know of a genius Jungian psychotherapist with a slightly sadistic streak? Or a remote woodland sanctuary where I could pretend I died, just for a little while?*

Our transaction played itself out in a way that is now familiar — not a lot of talk, the atmosphere thick with acknowledgement of what is occurring. I was about to meet an entity, a being, utterly foreign, with whom I would enter into a partnership that would change the course of my life.

Mushrooms are the fruit of the mycelium, a network not unlike the Internet that resembles the synapses of the brain. I like to think of each tiny crossroad in the mycelial network as a relationship. It is through these relationships that my near-decade-long engagement with psilocybin mushrooms has come to be. The mushrooms guided me to Kai Wingo, an urban farmer and leader among a community of high-dose psilocybin Afrofuturists in Cleveland. They led me to Alma, an elder *cuandera*, or healer, in Huautla de Jiménez, Mexico, where traditional mushroom ceremonies continue on, despite having been disrupted more than 60 years ago.

In 1957, Gordon Wasson, a banker with ties to the CIA, made contact with the legendary Mazatec *cuandera* and poet Maria Sabina in that very same town. He wrote a cover story for *Life* magazine about his “discoveries” there, giving it the title “Seeking the Magic Mushroom.” The article was a singular catalyst for the lifework of psychologist Timothy Leary and ethnobotanist Terence McKenna, who birthed an entire counterculture movement in psychedelics. For Westerners existing outside of indigenous traditions, this is our psychedelic legacy. It’s a story line that I have never been able to separate from its point of origin — an act that colonized the spiritual generosity and goodwill of a people all too often left abused, their actions unreciprocated.

It was my desire to honor the psilocybin mushrooms as the Mazatec do, not as a pharmaceutical helper, a pleasure drug, or even a tool of self-discovery in the Western psychological sense. I wanted to honor them as a holy sacrament. I began growing them at home — an act that is not technically illegal in the state of New Mexico. It started with solitary trips by the fire. After taking the mushrooms, I would place a small mound of tobacco at the base of a candle, a common offering (and one taught by herbalists and indigenous ceremonialists) that I’ve practiced since I was a teenager. I burned copal or frankincense resin. Lying down on the couch under a wool blanket, I would wait.

“You need to stop seeing yourself as a sick person,” the mushrooms said. They spoke to me like this, in fully formed sentences heard internally, like a memory.

“In your female form you are the quintessential bedridden Victorian lady on retreat.”

“Yes! It’s true! I do come from a long line of sick women. My mother had polio, tuberculosis, cancer, diphtheria, and Graves’ disease. My grandmother had tuberculosis and a morphine addiction. Sickness is how I locate my ancestry!”

“*Oh, I am so very sick!*” the mushrooms echoed, mocking me.

“We’re just waiting for you to stop pretending to be sick.”

“But I actually am kind of sort of sick.”

The mushrooms said that the Trader Joe’s Greek frozen yogurt I’d been eating daily was causing inflammation in my hips. What was going on in my hips was causing my neck to be jacked up, and this somatic traffic jam was making me depressed and lethargic. The damage could be remedied with ginger.

“Yes, ginger. Will you let us show you?”

An intricate, multidimensional temple with a Moroccan silhouette arose in front of me. It was vast and bejeweled, with an empty throne at its center. As a lover of minimalist architecture, I find myself resenting the task of describing its rococo attributes. My personal preferences were tossed in, like my favorite shade of aqua, found only in paint made from smithsonite, and gold, tons and tons of gold, in chunks and flowing strands and the thinnest of threads, gold forming arches and furniture, walls and handrails, cups and hairbrushes. It whacked me with its beauty so thoroughly, I was hyperventilating from the ecstasy of its splendor.

“This is ginger? This palace?”

My relationship with psilocybin mushrooms has been profound, but not nearly as grandiose as what I read in books written by psychedelic white men on the origin of (4), the (5), and (6). Currently, the psychedelic-science revolution is under way, after being on lockdown for fifty years. Michael Pollan’s book *How to Change Your Mind* makes an argument for legal therapeutic use of psychedelics, but only under the supervision of a trained professional. MAPS (Multidisciplinary Association for Psychedelic Studies) accepted a donation from the right-wing Mercer Family Foundation for studies on MDMA therapy on veterans. Many argue that such compromises and deals with the devil are necessary in order to destigmatize psychedelics in the minds of the mainstream populace. My question has always been: To achieve what, exactly, and for whom? What’s missing is a conversation on how women, indigenous people, old-school hippies, herbalists, and even teenagers have been using mushrooms forever — humbly, joyously, and quietly, under threat of the law. “This is how it is done because this is how we’ve been doing it” is a prayer I often say before throwing tobacco down on the altar. By saying this, I connect myself to the ancestors who unapologetically claimed their right to a sovereign and unmediated relationship with a living thing that grows from the Earth. These are old ways and doings.

I am not always solemn in my rituals. I have tripped on mushrooms at the gay-pride parade, been under their influence when greeting Airbnb guests, while riding in the passenger seat through fields of industrial corn in Nebraska, proclaiming to my girlfriend that something was terribly wrong, the stalks were planted much too close together. While high on something as spectacular as a mushroom, is anything really secular?

Since the release of Pollan’s book, a few people have sought me out, asking if I know of a therapist who can guide them on a psilocybin mushroom journey. Pollan preaches evangelically, with a Mr. Rogers-like wholesomeness, of the miraculous benefits gleaned by those who’ve done it in this way. But if it wasn’t for Pollan’s book, these people would never have gone anywhere near the stuff.

“I do know of a therapist,” I have said. “They’re called mushrooms. Eat them and ask them for help.”

It’s much too simple a prescription for most. To arrive to the mushrooms on their own terms, without the burden of expectations or the concepts put upon them by others, has been, for me, an act of decolonization. It is not in the nature of the Western psyche to give such power directly to a plant, let alone an unruly fungus. We want babysitters, esoteric prophets, shamans, and scientists to act as gatekeepers in the realm of the incomprehensible. Fair enough. What, after all, is the psychedelic but a private drama that, for all its profundity, only has meaning and significance to others when framed in a specific cultural context?

Up until recently, the celebrated psychedelic culture-makers have been predominantly white men. I have my own opinions as to how this has affected our collective imagination, but I suggest you look into it yourself. Three to five grams of dried psilocybin mushrooms should be sufficient to achieve clear-sightedness. Keep your wits and don’t do anything stupid. When you land solidly back to Earth you will have had the only psychedelic experience that really matters — the one that is your own.

* (1) is the author of* The Wrestling Party *and* (2), *and was recently named one of the (3) by* Vogue *magazine. She recently completed her memoir,* The Wild Kindness, *which chronicles over seven years of growing psilocybin mushrooms in New Mexico.*