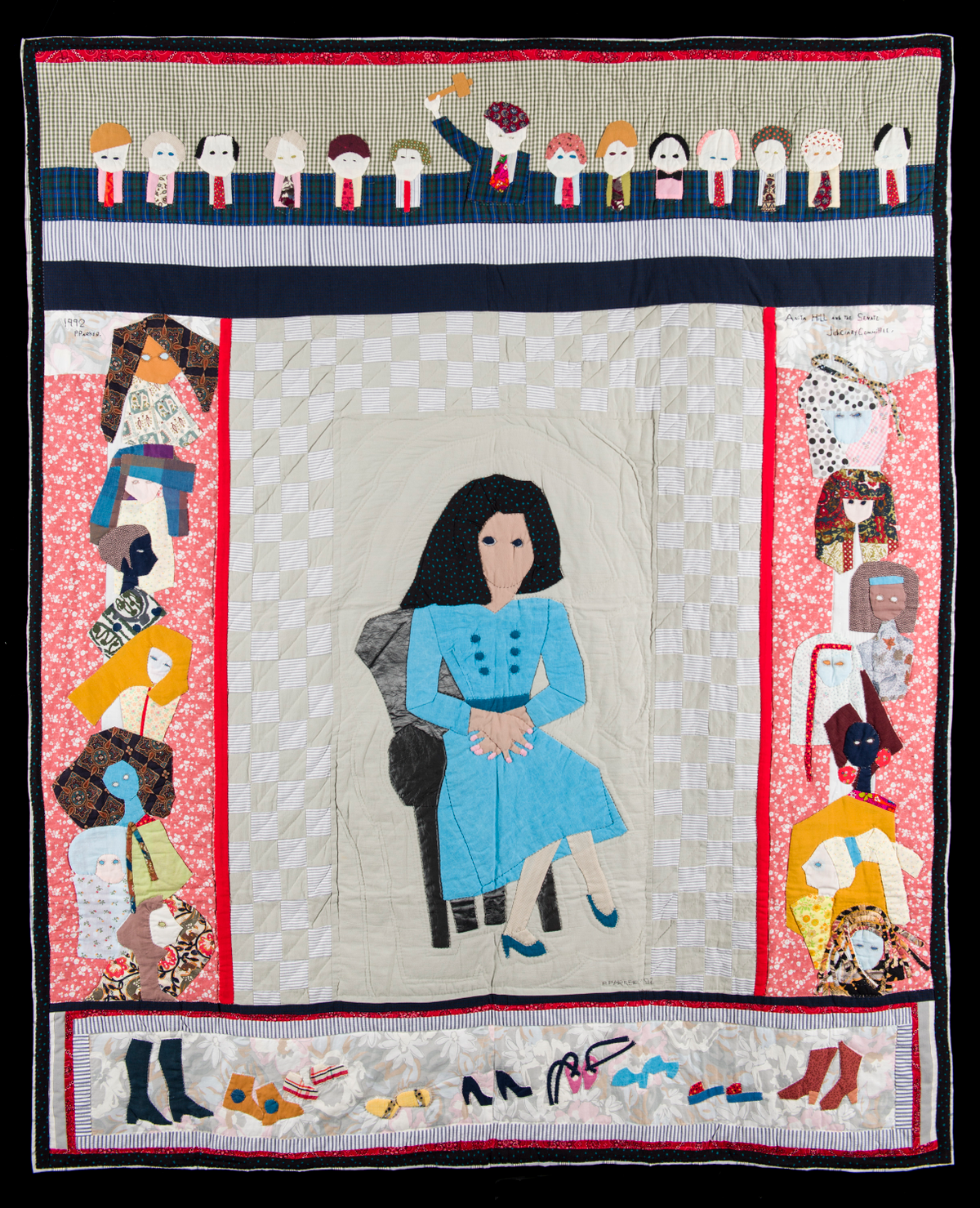 ​In 1992, my family was in Wisconsin for Christmas. I was eight. We were at the part of the visit where my grandmother habitually wheeled out her cedar chest, unfurling its contents to give us the Quilt Show. A lifelong painter, in her retirement she’d adapted sewing as an artistic medium. Now she was using it to broadcast her views. Many of the “wall hangings,” as she preferred to call them, told biblical stories. Not because she was religious, but because they were stories worth telling. There was Moses in the bulrushes, and Joseph with his coat of many colors. The Queen of Sheba danced nude beneath a tree, and Cleopatra floated down the Nile River. Then came a quilt of a single woman, sitting in a chair, legs crossed, facing the audience.

“This one’s for Anita Hill,” she announced.

The wall hanging depicted an African-American woman sitting alone in a teal dress, center stage, while a panel of white judges — all men — made a diminutive row at the top. Along the sides, women of every race, nationality, and hairdo were piled up helter-skelter, as if in conversation with one another. At the bottom, discarded high heels looked like they’d been kicked off in protest. From what I could tell, this quilt told the story of a woman whose truth was being questioned. I didn’t know what crime she was being tried for, but the fact that she was pleading her case before a panel of judges suggested they didn’t believe what she was saying.

Around me, family members nodded with deep understanding. “Isn’t it great that Pauline made a quilt for Anita Hill?’

I nodded with them. I thought it *was* great. My grandma had made me scores of blankets that I loved to burrow deep beneath. This woman in a teal dress looked like she, too, could stand to be warmed.

My grandmother knew she wanted to be a painter when she saw a black-and-white photograph of girls dressed up to dance. The contrast of the pleats in their skirts transfixed her. “I wanted to learn how to do that,” she once told me. “To relate the contrast between dark and light.” As a teenager, she earned a scholarship to Shurtleff College, a private school in her county, where she became known for her own ability on the dance floor and earned top marks in her class. The valedictorian was promised a full ride to the University of Illinois, but the principal refused to let it go to a girl. Instead, the prize was passed to a boy who my grandma claimed made all Bs.

When she told her father, in the 1920s, that she was going to be an artist, he said, “You’re the first generation to go to college. You’ll be a teacher.” She began her career in a one-room schoolhouse in the countryside of Illinois and finished it four decades later teaching art to high school students in a suburb of Chicago.

As newlyweds, she and my grandfather lived in the Cabrini-Green housing for veterans on the Near North Side of the city. Soon they had three daughters. She sewed all her girls’ clothing from underwear to raincoats. It wasn’t until the kids had left the house, and they’d retired to the farm in Wisconsin, that she began to sew for herself.

She credited the women’s movement with heralding a new era of quilt-making in America. In a homespun catalog of her quilt collection, she wrote: “Now that women have become free agents — engineers, nuclear physicists, lawyers, and such — it’s freedom! So why limit oneself to the traditional materials of paint, brushes, marble, and chisels when there is the vast sea of opportunities — fibers, fabrics, needles, threads, and thimbles.”

Relieved of the duties of motherhood and her teaching career, she took inspiration from scraps — leftover pieces of lace, her husband’s old work dungarees. Her consideration of these old objects through a different lens seems indicative of her new stage of life and the changing world around her. She chose to depict female epics that could use a retelling by her own hand.

Occasionally she exhibited her work at the town hall in Richland Center, a half-hour from where she lived. Other times she and my grandpa would send out invitations to their friends and neighbors across the county, throw open the doors of their farmstead, and hang a show on the walls of their home. She was a perfectionist who famously talked people out of buying her work. “Oh, you don’t want that painting, it isn’t very good.” “Don’t buy that one! It isn’t even finished yet.” When she was 93 and going blind, she kept herself busy “fixing” old portraits. “I don’t want anyone to think I was a bad painter once I’m gone.”

For years I’d been boasting about my grandma’s Anita Hill quilt. Even if I didn’t completely understand the details of the event itself, I knew the statement she was making with her work was representative of the stock I came from — liberal thinkers, driven by social justice, proud supporters of unions, champions of art. I kept secret the part about how I didn’t really understand the historical significance of Anita Hill’s testimony on the stand.

Because she had been a household name for my family, the older I got, the more embarrassing it was to fathom asking for an explanation. Then last summer I discovered the documentary *Anita: Speaking Truth to Power*. From my couch in Brooklyn I watched the same footage my grandmother had watched live on TV in 1991. Ms. Hill took a deep breath and, at the insistence of the Senate Judiciary Committee, described in yet more detail what exactly her former boss Clarence Thomas had said to her about large breasts, and Long Dong Silver, and the pubic hair on his Coke can. When asked why she was coming forward in ’91, nearly seven years after the alleged incidents had occurred, she simply stated:

“It would have been more comfortable to remain silent…But when I was asked by a representative of this committee to report my experience, I felt that I had to tell the truth. I could not keep silent.”

The panel interrogated her for nine hours, waiting for her to crack. And in the end, despite Hill’s testimony, which was corroborated by witnesses, and other women who came forward, prepared to tell of enduring the same mistreatment, Clarence Thomas was confirmed to his seat on the Supreme Court. This spring, a new generation of young women will be introduced to the horrifying chain of events in a version of Hill’s story, HBO’s *Confirmation*, that stars Kerry Washington as Anita and airs April 16.

I do not blame my grandmother for sparing me a full explanation when I was eight. Yet even without the details spelled out for me, my first interpretation of her quilt wasn’t far off. It had been a hearing in name only. In testifying about her experience of sexual harassment, Hill was treated as though she were telling a lie. Watching the events unfold from her living room in Wisconsin, appalled by the indecency this woman had endured — first from her boss, and then from the panel — my grandma could not keep silent either.

In an artist statement I found after she passed away, Pauline wrote, “The Senate Judiciary Committee was made up of thirteen men, all white, all wearing dark blue pin stripe suits. Television had just been allowed in the Committee sessions and all the Senators knew that dark blue showed up best on . These Senators were to decide whether Anita’s testimony would be accepted against Clarence Thomas. How she was treated reflects how all women of the world are treated by men in power.”

Following Hill’s historic testimony, the Civil Rights Act of 1991 was passed into law, allowing those who brought charges of sexual discrimination to seek jury trials and punitive damages. Record numbers of incidents of harassment in the workplace were reported. In 1993 that number was 10,532; by 1997 it had peaked at 15,889. Though misconduct still exists, there are now better codes and protocols in place to handle it. The most significant change is that Hill’s unwanted celebrity brought the topic of sexual harassment into the foreground of a national discussion. Her act of truth-telling allowed so many women to speak of their own experiences, to be liberated from the silence and self-doubt that harassment breeds.

In the April 1996 issue of *Working Woman* magazine, Anita Hill famously wrote, “Whether we call it a job or a career, work is more than just something we do. It is a part of who we are.” Through the example my grandmother set with her career — both as a teacher and as an artist — she taught me not only to respond to the world with my art, but to create art because it matters. I was told I could go to college anywhere, study any subject of my choosing. Like her, I opted for a creative path. A year ago, I was giving a lecture on the necessity of writing memoir to a classroom of ninth-grade girls. I began by asking, “Why is it important to write about our lives?” A girl raised her hand, and when I called on her, she said, “Because if I tell my story, maybe someone else will be inspired to tell hers, too.”

I imagine my grandmother stitching by hand on that farm in rural Wisconsin, the nearest neighbor or friend an hour away, daughters only accessible by a long-distance call. I wonder if she ever thought a wider audience might see her wall hanging. That wasn’t the point. She created it in an act of solidarity, a way to show the woman on camera she was not, in fact, sitting alone.

*Jeanne Hodesh is a writer, teacher, and textile enthusiast.​*