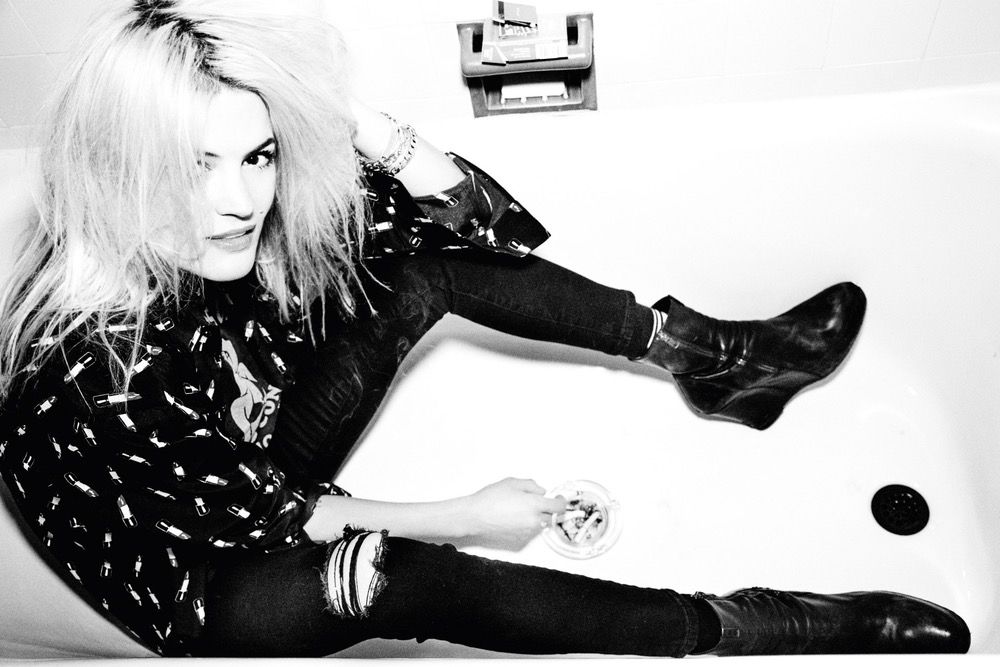 When I was 21, I dated the worst guy ever. He was a recent graduate of an East Coast art school with a fondness for Polaroids, PBR, and Camus. He was a loud talker and a mouth breather and had a terrible habit of verbally objectifying women even when I was in earshot. Our relationship was a nightmare and thankfully short lived. Despite his horridness and how weird things were between us, there is one thing about dating him that I am eternally grateful for: the Kills.

A few weeks into our doomed relationship, the worst guy ever lent me his copy of the Kills’ first LP (which I never returned), and I fell in love with Alison Mosshart. I hung on every word that she sang, completely enamored of her tone on ” (3)” and her eternally cool-as-fuck stage presence. Before the worst guy ever and I called it quits, we drove from Philly to Brooklyn to see the Kills play a sold-out show at the Music Hall of Williamsburg. To be honest, so much about that weekend was a blur, but still I vividly remember how watching Mosshart scream into a telephone while playing guitar made me feel so alive and whole.

Fast-forward eight years, and I’m sitting in the dimly lit lobby of the Bowery Hotel chatting with Mosshart, who, as I imagined her to be, is as badass and brilliant one-on-one as she is on her LPs. A few hours before the Kills were set to play the second night of two back-to-back sold-out shows in Brooklyn, she took the time to speak with me about her first band, how she met her bandmate Jamie Hince, and why  (4) is so fun to play live.

**Dianca Potts:** What did you want to be when you were a kid? Did you have any clue that you’d become a rock star?

**Alison Mosshart:** I never thought about what I was going to be when I got older. People love to ask that question when you’re a kid, and I never really had an answer. I always felt like I was already doing exactly what I was going to do. I was really into art as a kid and I really loved music, and those two things go very hand in hand. I’m still doing those two things, so I never made a life decision to go and pursue that.

**DP:** How did your love for music get started?

**AM:** I got into music through skateboarding. I lived next door to these teenagers when I was really little, and they were always out on their half-pipe with this boom box, and I was fucking obsessed with it. I would sit next to the boom box and listen to everything that they were playing. I would copy those tapes and listen to them all night while I was asleep, wake up and listen to them, and then go back after school and listen to them some more. When I was around 13, the kids that I skated with thought, *Fuck it, let’s get instruments and start a band* *,* because that’s what you do when you’re a skateboarder. It was a really fun thing to do after school, and by the time I was 14, we were touring. It just didn’t stop.

Somehow I got through junior high and high school and two years of college very much so stop-and-start way so that I could tour. That was all I cared about, and it was awesome. I got to see the world at a very young age. My parents tried to say no a few times, but I was very headstrong. I was just like, *This is what I need to do* . My first band, (5), went on for six years, we toured everywhere, which is incredible for a punk band of our size because this was at a time where there was no Internet, and the music scene was very much word-of-mouth and fan zines; you booked tours by sending letters. I’m so happy to have had that experience because that kind of life skill set is so major. The ability to communicate, to be patient, to read a map. You’re basically running a small business at the age of 15. I don’t think that there’s anything else in my life that I learned so much from.

**DP:** That sounds like the perfect preface to getting things started with the Kills. When did you and Jamie Hince decide to be in a band together?

**AM:** I met Jamie when I was 17 or 18 while I was touring in London, and he was staying in the flat upstairs from where I was staying. I used to just hear him play electric guitar up there, and I was like, *This is the fucking coolest-sounding electric guitar ever* . When I met him I told him, “I want to be in a band with you,” and he thought that I was insane but I really persisted, and eventually we started writing and he encouraged me. He lent me a four-track and was like, “You should write your own songs, not just lyrics, you should make noise.” I took this four-track cassette recorder with me while I was on tour in Europe, and I would sit in closets in the middle of the night, while the rest of my band was asleep, figuring out how to record and making all this crazy spazzy music. Then I would run back to London with the tapes, and that’s how the Kills started.

**AM:** It changes all of the time, but I love to play “Kissy Kissy,” which is an older track, but I don’t want to play a show without that song in it. It’s got something going on, some type of magic. There’s some new ones that I love to play, “Whirling Eye,” and “Doing It to Death” is really fun because people know it, which is nice. It’s interesting to see every night what people are receptive to, but it changes on a nightly basis.

**DP:** In addition to the Kills and your work with , you had (2) last summer in Chelsea. What was that like?

**AM:** It was really awesome to be asked to do that because any excuse to paint and have somewhere for it to go is exciting for me. I had done so much painting on the road, I had so much work, and it was just going into boxes. No one had seen it, so it was really cleansing to see it on the wall and sell some of it. It was such a huge honor to be asked to do an art show . You could not have convinced me at any point in my life that that would be in the cards, you know what I mean? It’s too wild a dream to have, but then it happened, and it was awesome. It felt amazing. It was kind of like an out-of-body experience.

*Dianca Potts is an assistant at Lenny Letter* .