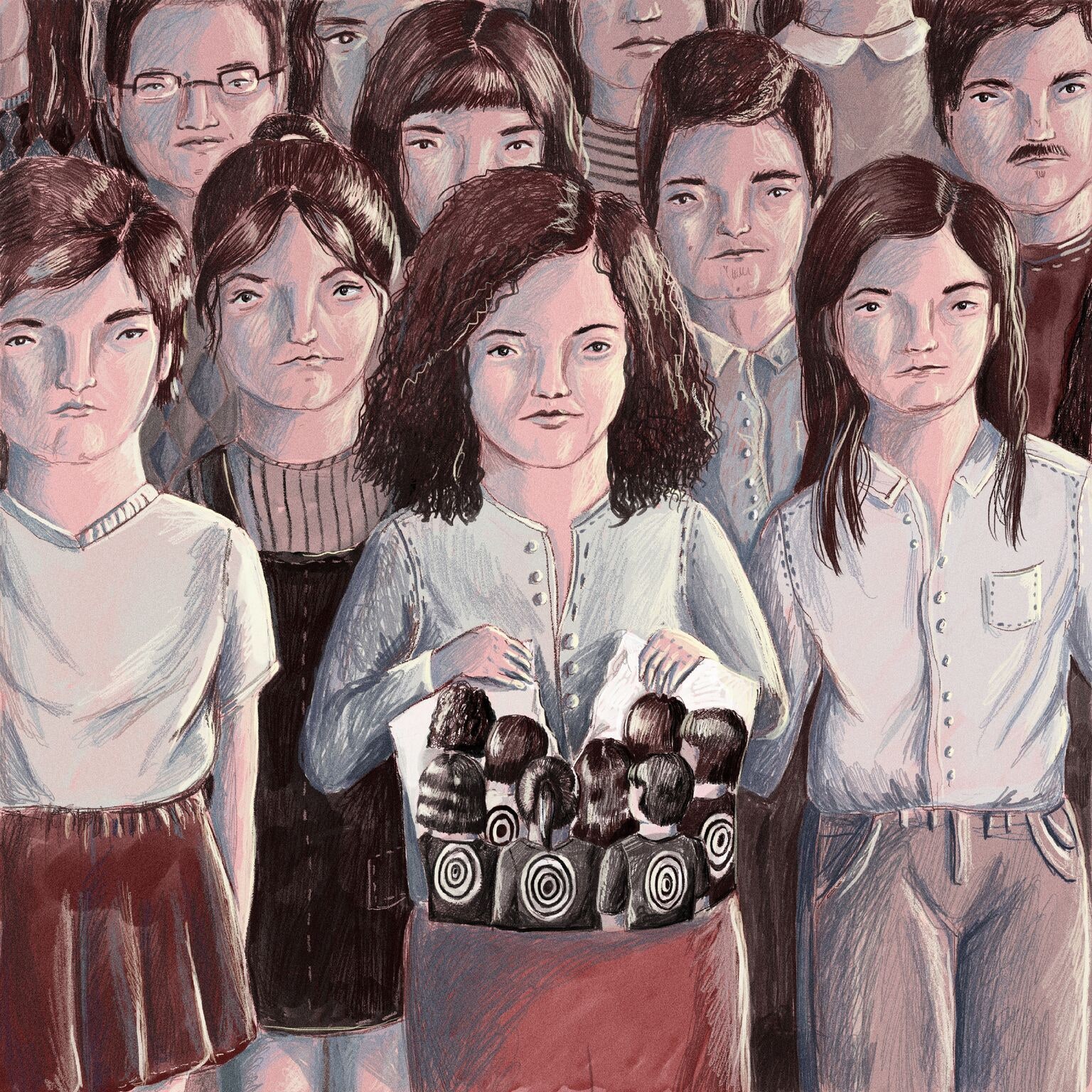 I landed in Phoenix, Arizona, just four days before the election. The last time I had been in Arizona was six years ago, after the passage of SB 1070, the anti-immigrant state legislation that legalized racial profiling. I had organized a group of women from all over the country to hear and document the stories of the women impacted by the new legislation. We quickly learned that there was a leading villain in the story, Sheriff Joe Arpaio, who apparently spent his days and nights imagining new ways to make life unbearable for immigrants. His deputies drove military tanks through residential neighborhoods, raided the homes of immigrant families in the middle of the night, and arrested parents in front of their children. His terror tactics laid the groundwork for the hate legislation that would haunt a generation.

One of the community organizers there, Marisa Franco, is a dear friend of mine. We worked together in New York, organizing domestic workers to pass the first Domestic Workers’ Bill of Rights in the nation. She came home to Arizona to organize in her community in the wake of SB 1070. She’s a mastermind behind the campaign to stop immigrant deportations and a co-founder of a national Latinx activist organization, Mijente. I found her in Phoenix during this historic election year, leading a campaign to unseat Sheriff Joe Arpaio after his more than twenty years in office. The community that was targeted by Arpaio has spent the past six years organizing. They transformed the pain of his reign into power.

Arizona was a symbol of division and fear. It is now a home for vibrant, inclusive activism and civic participation. One rare bright spot of this otherwise dark election is that Arpaio lost his job, thanks to this activism. What better way to understand that transformation than through the eyes of a feminist organizer?

**Ai-jen Poo:** Tell us about where you’re from and what led you to be doing the kick-ass organizing that you’re doing.

**Marisa Franco:** I’m from the town of Guadalupe, Arizona. The town is a mix of Yaqui, Mexican, and Chicano. My town was hood — like roosters-roamed-the-streets hood. We didn’t have sidewalks until like five years ago. Sheriff Arpaio tested a lot of his tactics there, set up checkpoints to check drivers for papers. A lot of people live their whole lives there, like born, raised, and died there. It’s the best place in the world to be on Halloween — the whole place turns into one big block party, everyone dresses up, people turn their homes into haunted houses for the children, and every house has a ton of candy and food. It always reminds me that it’s often the people who have the least to give that are the most generous.

**AP:** So how did you get from Guadalupe to where you are today? How did you become an organizer?

**MF:** From a young age I was always naturally inclined to notice imbalance and injustice. It’s just who I am. Growing up, the thing I was really conscious of was gender. I saw older women in the community, or even women my age, get caught up and stuck. Just not living the life they wanted to live. So I pushed to finish high school and worked hard to go to college. I was in high school when Prop 187 was happening in California (the anti-immigrant ballot initiative to prevent immigrants from accessing higher education, services, and the safety net). I wrote articles about it in the school newspaper. I just got involved in everything I could, like MECHA (a Chicano student union/club), service work with children, hell, even a Latina sorority. I even did a legislative internship in DC, which was a reckless failure.

I came across organizing by deduction. At a certain point you want to figure out how you change the game. There was very little in Arizona in terms of community organizing or activism at the time, so I left for ten years to learn how to organize. I did all kinds of work to that end — with public-housing residents and people on skid row, with domestic workers in New York, with immigrant day laborers.

**AP:** The last time I was in Arizona, it was right after SB 1070 had been passed. It was a movement moment, a moment when people came out of the shadows to resist and people came from all over the country to support. But the tension in Arizona had been building for many, many years.

**MF:** I left home to learn how to organize, and I came home to find my purpose in organizing. This chapter in Arizona is very personal to me. It’s an opportunity to write a chapter and close something, on our own terms.

Arizona foreshadows the impact of many of the trends that are shaping the whole country. Free-trade agreements displaced poor people in Mexico and Central America, pushing people to migrate north for work. Then the border was militarized, so people were forced to cross one of the most dangerous deserts in the hemisphere. Thousands have died crossing the border here; it’s like an open wound, literally and figuratively. Arizona is also a major destination for white retirees from the Midwest. It has the largest concentration of white older people, and young millennials of color. Think about that: for a white person moving here to retire, younger people of color rising up to take their political and economic power is not what they came here to see or why they paid to own homes and live here. The right wing made a real investment here in grassroots infrastructure and education to capture that base . The left did not make a parallel investment.

So when SB 1070 hit in 2010, all of those dynamics came to a head. Brown people couldn’t take the suffering any longer. It was a painful, ugly time, but it ushered us into a different moment. A generation who had grown up with targets on their backs, their faces pointed down in fear, said, “Enough is enough.” It’s the final chapter of that era, symbolized by the downfall of Sheriff Joe Arpaio.

There have been a lot of strategies to get us to this point, a lot of different leaders and organizations coming together. One set of groups registered 150,000 new voters in Maricopa County, where Sheriff Joe reigns. Another group led the “Undocubus,” where four undocumented people “came out” and said to Sheriff Joe and his supporters: “We’re not afraid.” It was important that we had the flamethrowers who were willing to do direct action and civil disobedience alongside the civic engagement. In this election cycle, some local groups have embraced the hybridity. The unifying thing has been risk. When you’re constantly told to sit down and shut up, you have to be willing to break that norm, not comply, and take risks.

**AP:** There was a recent burning of a black church in Mississippi. Many people are predicting a rise in vigilante violence as a result of the spread of “Trumpism.” The immigrant community in Arizona has been living with vigilante violence for some time. What do you think the rest of us can learn from the people of Arizona about how to prepare for the future?

**MF:** You need purpose, and you need to be prepared. One thing in tense political moments is to assume that nothing will happen. The other extreme is to be paranoid, which keeps you from moving when you need to move. And then there’s risk. People have to be ready to embrace risk. The second you stop embracing risk, you have lost touch with the edges of change work, which is where you need to be to really have an impact.

**AP:** What do people need to know about how you created this moment in Arizona that might not be obvious from the outside?

**MF:** A big thing for us was the concept and action of coming out. People usually think of coming out of the closet as LGBTQ (and I have done that too). But in the case of the immigrant communities, people came out of the shadows and declared that we were unafraid. Each of us has closets that we’re in, or ways that we’re in the shadows, whether it’s about being poor, or the work we do, or our criminal record. We are all taught to be ashamed of parts of who we are. How do we find each other if we’re all in the shadows? This concept of coming out is about stripping away the things that make us hide. When it happens for many of us together, it’s powerful.

**AP:** With this election I’ve been thinking a lot about polarization in our country. I have been wondering what it will take to create a narrative and culture that truly embraces everyone, where everyone belongs and everyone has a voice. I think it’s a critical question, and Arizona, as a bellwether, can probably teach us a lot.

**MF:** I’ve also been thinking a lot about polarization. I’m someone who believes that there are times when polarization is necessary. Sometimes it helps clarify, like an astringent for your face. It can help you find the people who are with you and see clearly who is against you. It’s not always about meeting in the middle, because the middle narrative at this point is upper middle class and white. And working-class people smell the bullshit. The middle-of-the-road narrative doesn’t work. It’s a real mess.

**AP:** Can you imagine a bridging narrative? It seems like we need new narratives that can hold the aspirations of a new, way more diverse America.

**MF:** I can. If you have a community that has been exiled, for that bridge to be built, the community has to feel whole first. You have to come to the table whole. Here in Arizona, the immigrant communities and Latino communities have been brutalized. In a new narrative, the community has to be able to speak in their own words. That comes through organizing. Campaigns like the one we are fighting right now are like the salve. They are a mechanism to resist but also to heal.