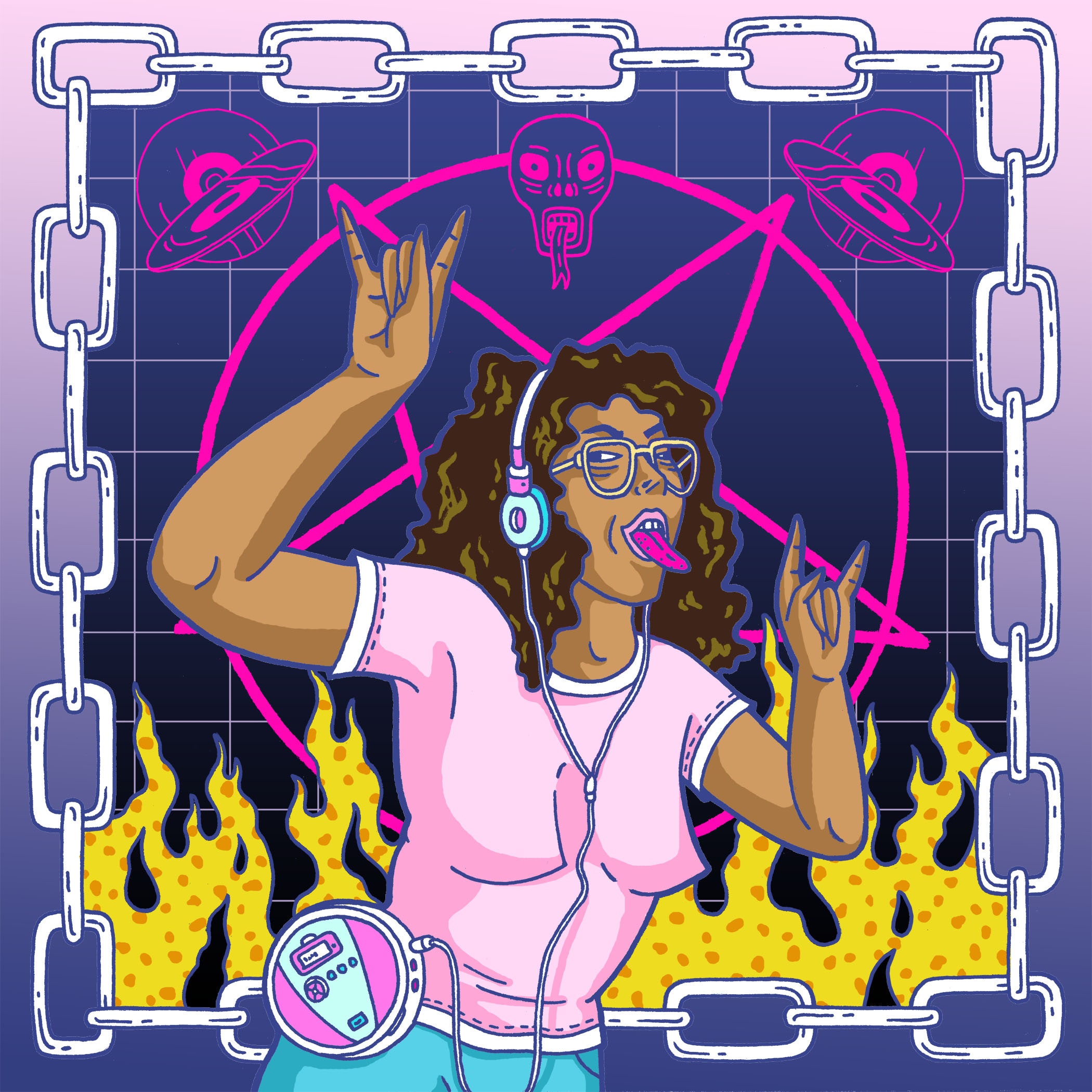 It all started with a CD.

The CD sat on the top shelf, the shelf I was not to touch, in the room I was not allowed to wander into unless I heard the exact words *Come in*. Even the dog was not exempt from this rule. To be granted permission to enter meant a sneak peek at the world of teenhood. Permission meant I could fumble through her fine-tipped sharpies, poke at her dried-up watercolors, and smell the strange tang of her oil paints. Permission meant I could run my hands nervously across her collection of Anne Rice hardcovers and peer at the depictions of vampires and witches. Permission meant I could admire, even if I couldn’t touch, her latest electronic gadgets and, of course, her CDs.

The album, my sister Christina explained to me while waving it slowly in front of my face, was *explicit*. My new word for the day. “See this?” she said, pointing with a pencil to ensure my Coke-bottle-sized spectacles were focused in the right direction. “This also says *parental advisory*.”

I gasped. I knew that one. That was one step below the coveted “close your eyes and hold your ears” *rated-R*.

“Yes,” she said gravely, knowing she had reached a new level of cool. “You have to have parental permission to listen to this.”

I solemnly nodded, already frantically compiling the list of chores I would tell my father I would complete in exchange. “Permission,” she interrupted, brow raised, “you won’t get, because this is *explicit*.”

I blinked heavily. “But you get to listen to it?”

“You aren’t allowed to listen to it because one listen,” she hissed, “will scare the pants right off of you! You’ll never listen to a CD again!”

I gasped. “Maybe even never sleep!” she added, an afterthought.

Later that day, I found myself hiding under the desk, trembling with the knowledge of having broken three rules. I wiped sweat from my brow, tasked the dog with sitting in front of the cracked door as lookout (he got to peruse Christina’s trash can at the same time), and plugged her headphones in.

I promptly scared myself silly with the screaming vocals, the screech of guitars that sounded utterly mad, and the pound of drums that sounded like death.

It took me weeks to work up the courage to touch her CD player again. Weeks before I could even think about sneaking it, let alone that particular CD.

Weeks to come to terms with what I had heard.

Emotion in its rawest form.

Christina has always been a bit mysterious. Being four years older certainly helped to make everything she did seem otherworldly. She had a knack for teaching herself new things. How to draw. How to play the violin. To me, she was limitless. I was (and still am) in awe of her.

Yet whatever she did, I did. I insisted on it. I looked at her and saw myself reflected. It became more important as I got older that she was the mirror to which I asked not who’s the fairest but “*Am I strange?*”

Mamas will always tell you nothing is wrong with you. Sisters, however, tell the truth. Her glasses were my glasses. Her Apple Bottoms were mine. Her tight corkscrew kinks shot straight up like my own. At night, I watched her layer herself in the same shea and cocoa butter I used.

So when they said I smelled funny, tugged incessantly at my hair until I was in tears, and asked how far the black went down on my skin, I looked to her.

I couldn’t feel like an outsider when I was with her.

With her, we defined our own blackness, and we did not let ourselves be put into society’s boxes. So when we started to discover Midwestern rock, the lifeblood of any Midwestern town, we weren’t ashamed.

For us, music was something you moved to, and it was tempo that moved us. How could we not love a genre that devotes itself to drumbeats? So what if we head-bang booty-shaked!

How could we not love a genre that brought back the seven-minute song? We threw our hands up and howled along with everyone else. We screamed and released the rages of the day, the week, the month. We came home from shows feeling an inner peace that settled into our bones, leaving us ready to face the world again.

Our parents looked on, bemused by how we could listen to Underoath and Beyoncé back to back. As soon as they understood it wasn’t Devil music, they didn’t care what we listened to. They did, however, put their foot down at our wearing all black. So my sister and I consoled ourselves with the fact that music doesn’t care what you are wearing, and we promptly showed up in pink shirts to concerts where everyone sported black leather jackets on top of black pants. “We’re black already,” we said, and strutted.

Fast-forward ten years, and there I was, open-mouthed and staring once again. The air smelled of half-spent beer and sweat. Every now and then some restless eye would catch a hold of us and blink in surprise before nervously skittering off again. The darkness that usually cloaked us at shows had been broken by all the stage lights, which suddenly illuminated the room.

“Wall of what?!” I gasped, dodging elbows and the surging crowd.

“Get back!” she yelled, then helped me. Perks of having a tall sister: she can grab you and place you behind her. Downsides of having a tall sister: she can grab you. “They haven’t done this since they got kicked out of Vans Warped Tour!” she yelled over the fray. I peered around her hip to see the crowd melting away. They left a clear line, and at the very head of it, Beau Bokan, lead singer of Blessthefall, towered over it. He stood at the front of the stage as if he were about to conduct the mightiest orchestra this world had ever seen.

On the left, the crowd swarmed, buzzing and hungry.

On the right, it swayed and curdled in on itself. Ready and waiting.

My heart kept beat with the slowly moaning drum. The hum of words unsaid. Breathless.

A lightning strike from both ends.

The clang of a bell while you whisper.

Emotion in its rawest form.

I grabbed a cement pole with my left arm and hooked my fingers in my sister’s belt with my right.

I held on for dear life against the waves of people literally crashing into each other. Their chests colliding, elbows flying, and bodies bouncing off of each other. I held on tight and tighter still, fighting the tug and pull of arms not my own as the charging, broiling mass swallowed us whole.

We were in the middle of the crowd, and it wasn’t clear if we would ever make it out.

*Courtney Long is an African American metalhead in her twenties and co-editor of* #BLKGRLSWURLD *Zine. When not head-bang booty-shaking, she can be found holed up in the nearest chocolate shop*.