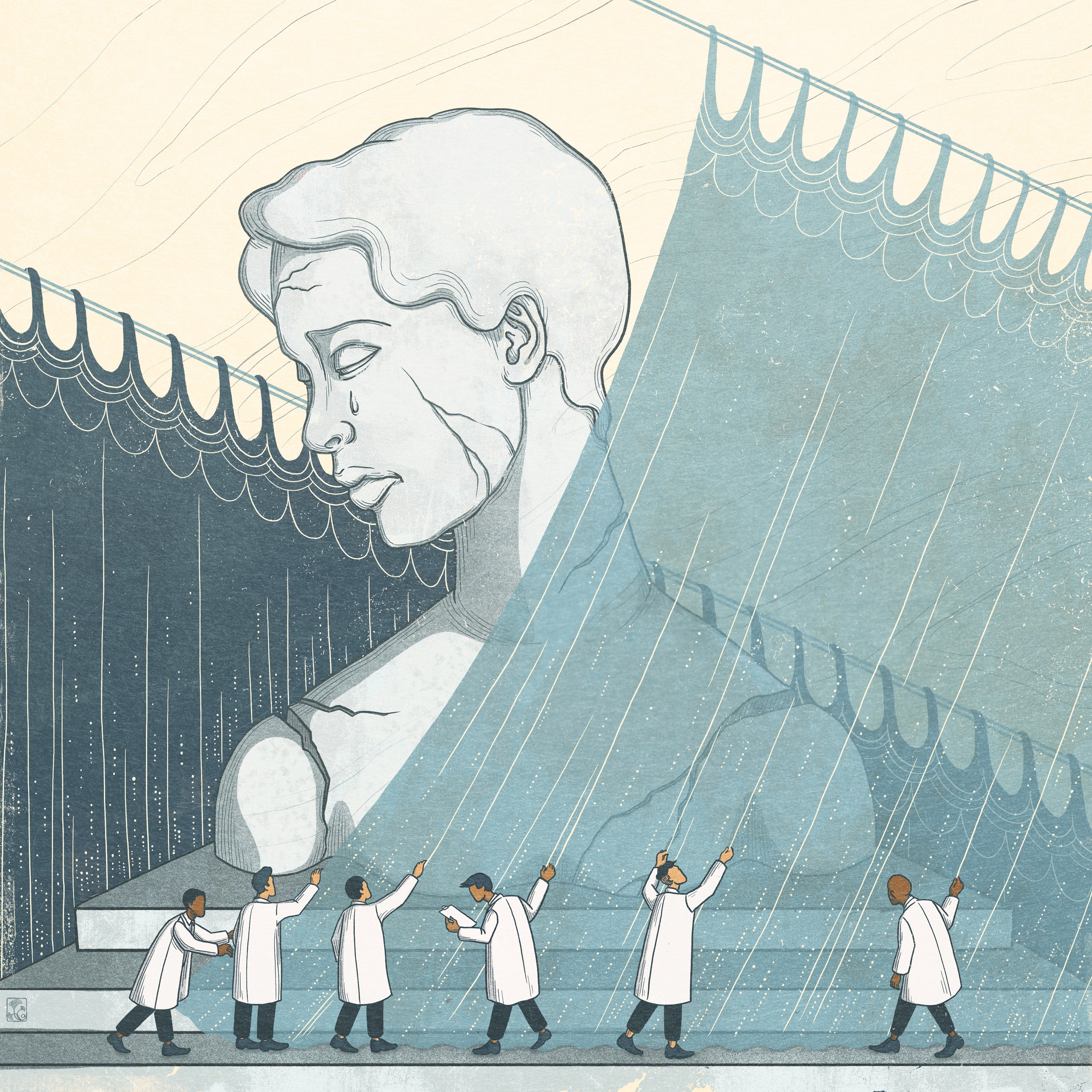 Before I got sick, I probably would have said I had a lot of trust in medicine. Not that I’d given it much thought; as a healthy twentysomething, I’d at that point had little need to. But I believed in science, and I viewed medicine as an extension of science.

Sure, I knew that women had been almost entirely excluded from the medical profession until the mid-’70s. And I knew that the medical men of centuries past had some absurdly sexist theories — like that getting a higher education would cause women’s uteri to atrophy or that women’s smaller brains put them lower on the evolutionary ladder. As a longtime feminist writer, I certainly knew, intellectually, that scientific “objectivity” is a myth; that researchers, like all of us, cannot help but bring their biases to their work; that it affects the questions they ask, and the questions they don’t ask. Still, I had enough faith in science — in its ability to be a force for progress and truth — that it seemed like a few decades was probably long enough to overturn the sexist legacies of a historically male-dominated medical system.

Above all, I just hadn’t worried too much about it — that is, until several years ago, when my immune system started attacking my joints. I was diagnosed with rheumatoid arthritis and became one of the estimated 50 million Americans, three-quarters of whom are women, with an autoimmune disease.

As I learned more about autoimmune diseases, I discovered just how lucky I’d been to get diagnosed within several months. According to a (11) by the American Autoimmune Related Diseases Association, patients with autoimmune diseases see an average of four doctors over four years before they are accurately diagnosed, and nearly half report being labeled “chronic complainers” overly concerned with their health during that search.

As I started asking among my social networks if other women had had similar experiences, it turned out it wasn’t just women with autoimmune diseases who had struggled to get health-care providers to take their symptoms seriously: There was a friend whose abdominal pain and incontinence from a ureaplasma infection was diagnosed as “stress.” There was another friend experiencing dizziness, wooziness, ringing in her ears, and floaters in her eyes from West Nile virus who was referred to a therapist for depression. Another who’d been told her stabbing chest pain from pericarditis, inflammation of the lining of the heart, was likely just anxiety. The list went on.

After spending the past few years writing a book about gender bias in medicine — and hearing from nearly 200 women with similar tales of having their symptoms dismissed, belittled, or disbelieved entirely — I’ve realized that doctors just aren’t equipped with the knowledge they need to be able to provide care for their women patients as well as they can for their male patients.

For decades, women were largely left out of clinical research, a problem that wasn’t even on the radar until the (6). Even today, (1) research results by gender to determine if there are any differences between men and women still isn’t the norm, even though we increasingly know there often *are* differences — in everything from (7) to the (2). Preclinical research on animals and cell lines still (8) to male subjects. Many conditions that disproportionately affect women — including (9), fibromyalgia, vulvodynia, interstitial cystitis, and chronic fatigue syndrome — are still very poorly understood, yet receive minuscule amounts of research funding. And since medical education evolves at a snail’s pace, much of the new knowledge about women’s health that has emerged over the past few decades still hasn’t made its way into clinical practice.

When I first started hearing stories from women whose ailments were brushed off as anxiety, depression, or “stress,” I assumed this was just yet another realm where women’s voices were not granted the same authority as men’s voices are. But the distrust of women’s reports of their symptoms has even deeper roots. While we tend to think of “hysteria” as a quaint relic of the nineteenth century, in fact, while the terms may have changed, the concept of hysteria never really disappeared. The idea that any physical symptoms that medicine can’t explain by a well-understood physical disease can be attributed to the patient’s “unconscious mind” — and the belief that it is women especially who have such psychogenic symptoms — has proved to be a very persistent one.

Encountering this kind of medical gaslighting when you have a degree of privilege, like I do, can feel a bit like walking through the looking glass and finding yourself in 1950. As one woman, the filmmaker Jen Brea, told me, “It was the first time in my life that anyone had ever doubted my account of the world.” When she’d suddenly begun experiencing disabling dizziness and neurological symptoms after a severe fever, doctors (3) she was just stressed or dehydrated and, eventually, that she had “conversion disorder” from a repressed trauma. In the real world, she was an accomplished Harvard PhD candidate; in this medical realm, where there seemed to be stereotypes at play that she sensed but didn’t fully understand, she felt like she needed to bring her fiancé to appointments to “vouch” for her credibility. Even more disturbing: that did seem to help.

It’s hard to overstate how disorienting it can be to be told that “nothing is wrong” when your body is telling you that something most definitely is. As feminist scholar Susan Wendell has (10), “What can I know if I can’t know what I am feeling in my own body? How can I remain connected to a world that denies I am in pain, or dizzy, or nauseated, when I myself cannot deny that I am?” To reconcile this dissonance, even highly educated, “empowered” patients may doubt themselves rather than the expert; the authority conferred by that white coat still holds a powerful sway in our culture.

But more and more, I think, we are trusting ourselves instead — and some enlightened doctors are willing to admit their limits. That means that, as Dr. Sandra Gelbard (4) in a recent Lenny Letter piece, instead of dismissing symptoms they can’t readily explain, doctors need to learn to embrace the words *I don’t know*. The consequences of not doing so, she points out, can be devastating for patients, as well as breed “mistrust that can be hard to come back from.” Winning back women’s faith in medicine will require that *all* doctors start believing us when we say we’re sick. Trust is a two-way street.

*Maya Dusenbery is the editorial director of Feministing.com and author of* (5), *which was published in March by HarperOne*.