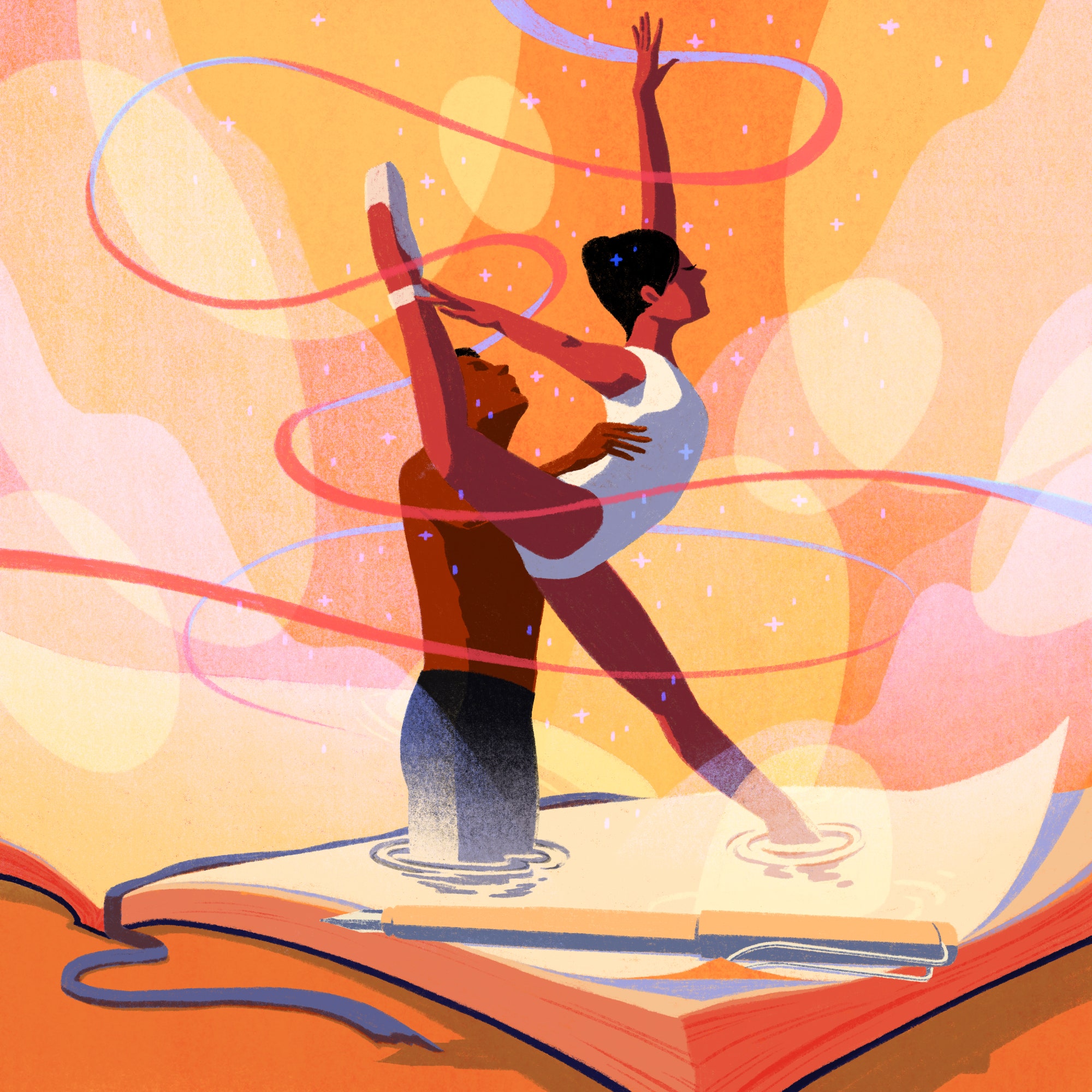 Claudia Schreier walks into a rehearsal studio at Chicago’s Joffrey Ballet. She carries a notebook in which she has written the ballet that has possessed her for months. In it are sketches of the floor patterns for her dancers, the shapes she wants them to make with their elastic limbs, the crescendo and rhythm of the music as she imagined it through her dancers’ bodies. She shows me her choreography notebook before her rehearsals start one January morning, but I can’t decipher what she’s written down. It’s her own language, one she is able to transpose onto the young dancers who are, at that moment, stretching along the studio’s perimeter.

Her dancers are primarily Studio Company members at Joffrey Ballet, one of the best companies in the country; many of them have moved here from all over the world. Claudia herself was never a dancer here but landed in this room through a more circuitous route, after winning a coveted spot in the 2018 Joffrey’s Winning Works Competition. At age 31, Claudia would be nearing the end of her career as a professional ballet dancer. As a choreographer, she’s just getting started.

Claudia grew up in a mixed-race family in Westchester, the daughter of a Jamaican mother and white father, and soon noticed that no one around her, including in her ballet classes, looked like her. “My community was predominantly white, upper middle class, and liberal, which made for a comfortable but sheltered childhood,” she recalls. “I consider myself lucky not to have felt that I was treated differently in ballet class due to my skin color, but it wasn’t until years later that I understood how much my upbringing influenced my perception of what ballet was and who it was for.” In the past few years, Claudia has become a full-time freelance choreographer, notably as a woman of color in an art form that has (1) since its beginnings.

Dance is one of the most ephemeral art forms, leaving no trace behind, and the part of dance that lasts — choreography — has been historically dominated in ballet by white men (George Balanchine, Jerome Robbins, and Vaslav Nijinsky are perhaps the most famous among them). A few women of color, like (2) of American Ballet Theatre and (3) of the Dutch National Ballet, have made headlines for changing the face of classical ballet onstage, but Claudia stands out in the industry for being one of very few women of color who identify specifically as ballet choreographers. “Staking a claim in an art form historically associated with exclusion is critical to broadening the definition of what ballet can and should be,” she wrote in an email.

In her Joffrey rehearsal, Claudia is choreographing a new ballet called “Night Vision,” a nearly twelve-minute piece set to a concerto by Richard Danielpour. The dancers speak several languages as they work out the ballet’s kinks together, but they all count in English once the music starts, snapping their fingers to the irregular rhythm. Claudia works through each sequence with them several times, explaining what she’s after and trying different steps on their bodies until she’s satisfied — until her dancers move with ease through the staccato sequences.

I ask Los Angeles Ballet soloist Liz Walker, who has worked with Claudia in the past, to describe her choreographic style. She explains that it’s a mix of “balletic vocabulary with the sweeping movement through space … more commonly found in modern dance.” In “Night Vision,” for example, much of the dancing is contemporary, with more modern gestures like turned-in legs and flexed hands, but the women dance en pointe, partnered by male dancers.

“I actually really love making ballets that can be performed on both pointe and in flat shoes,” Claudia tells me later. She doesn’t require female dancers to wear pointe shoes “because there is just so much more freedom in movement.” In other words, she often plays with equalizing dancers by having them all dance on flat, another nod toward a more contemporary dance vocabulary, an update to the traditional and often limiting ways women are partnered by men.

When Claudia was a young dancer, she had no idea that ballet could look like anything other than thin pale women in tutus. “I had a very twisted view of what beauty was because I didn’t see anyone who looked like me in my world,” she says. Like so many ballet dancers, Claudia saw only one road to dance success — a road paved with satin pointe shoes and hyper-turned-out legs — which would require her to work her way up from the corps de ballets. She could already foresee all the disappointment of forcing her body into the very specific mold of classical ballet, forcing her joints and ligaments into positions that would end up causing her serious injuries. “By age eighteen,” she says, “all I knew was that I was confident I didn’t want to pursue a professional career in ballet, but that I still wasn’t ready to let go.”

Claudia chose to attend Harvard, where she majored in sociology but could study with the Harvard Dance Program, as both a dancer and scholar. Here, she was able to develop a new vocabulary for her body, for the history and culture of dance in America, and for what was possible through diverse and pioneering choreography and representation.

“Suddenly, there was Taylor,” she recalls. “There was Graham, there was Limón, there were all of these names that I hadn’t had clear exposure to.”

One of her most influential Harvard professors was Heather Watts, the last ballerina George Balanchine selected before his death, who is married to former New York City Ballet (NYCB) principal dancer and newly appointed Juilliard president Damian Woetzel. “Heather and Damian are actively changing the face of dance in America,” she wrote in an email. “They illuminate the past with first-hand accounts of their experiences with Balanchine, Robbins, and the other greats, and fortify the future of dance by fostering collaboration, curiosity, and creativity at every level.” Claudia now considers both Woetzel and Watts her mentors.

Because Claudia didn’t follow what she calls a “traditional company structure: choreographers who get their start through creating works on the companies for which they dance,” she had the freedom to realize that choreography, not dancing, was her future.

“If you’re one of a hundred women trying to make it through the company ranks, you’re not going to be spending all your time wondering, *How can I be making art?*, because your focus is performing,” she tells me.

Choreography became an outlet for Claudia during her time at Harvard. “It was a thing I did when I didn’t want to work on my papers, or when I had a piece of music in mind that I was dying to work on with my friends,” she recalls. “But I never felt pressure — I did this because I wanted to.”

After graduating in 2008, Claudia took a job in the marketing department at Alvin Ailey American Dance Theater. Claudia describes her seven years at Ailey as “a lot of time management,” waking up early to choreograph before going to work and working with dancers late at night. Then, Woetzel commissioned her to premiere a work for Vail Dance Festival — an opportunity she identifies as pivotal in her career.

The following year, another call significantly shifted the course of Claudia’s life: she was awarded the Virginia B. Toulmin Fellowship for Women Choreographers at the Center for Ballet and the Arts at New York University. After that, she decided to leave her position at Ailey and focus full-time on her choreography. “My entire life changed in one minute,” she says of the acceptance call she received from the center. “It was surreal.”

Shortly thereafter, she was accepted at the New York Choreographic Institute at NYCB, where she collaborated on a ballet with Juilliard composer Will Stackpole. In the past few years, Claudia’s work has been performed at Joffrey Winning Works and Barnard Department of Dance, with upcoming commissions for Ballet Hispánico (a Vail co-commission, her third for the festival) and Dance Theatre of Harlem. In 2015, she began her own company, Claudia Schreier & Company, and two years later she was invited to present a full evening of her choreography at the Joyce Theater in New York City. She continues to work with Woetzel as his rehearsal associate when she isn’t choreographing herself.

|||A scene from “Night Vision.” Photo by Cheryl Mann

In the final minutes of the “Night Vision” rehearsal, Claudia stands at the front of the room while the male dancers drag their partners offstage. “You have time,” she tells them, to keep them from rushing through the steps. The women lay their heads against the male dancers’ chests and lean into them. Claudia makes notes in her notebook, perhaps what she wants to keep working on or how the ballet has changed to accommodate the dancers’ different strengths.

Her choreography reflects the ways the greater cultural movement has asked the dance community to consider what it means to use the body as an artistic tool. “The way we think about the use of the body professionally is changing because of the conversations we’re having culturally, socially, politically. In the dance world in particular, there is increasing focus on how teachers and choreographers interact with students and dancers,” she explains.

Walker tells me that Claudia “doesn’t take on the stereotypical choreographer’s ego, which often can result from a choreographer’s effort to grasp control of the working environment.” She adapts to each group of dancers and each new job.

Before she left the Joffrey studio, she thanked each dancer, standing at the front as they all came up to her individually to bow and curtsy. Claudia bowed back to each one, thanking them for being her instruments for the day.

As she continues her choreographic work, Claudia will have to keep inventing both where she’s heading and what will bring her there. She thinks one day she’d like to take on more of a leadership role in the arts. But her ultimate goal, she says, is “transforming spaces by still being kind.”

* (4) is a writer living in California and is working on a memoir about ballet and women’s bodies.*