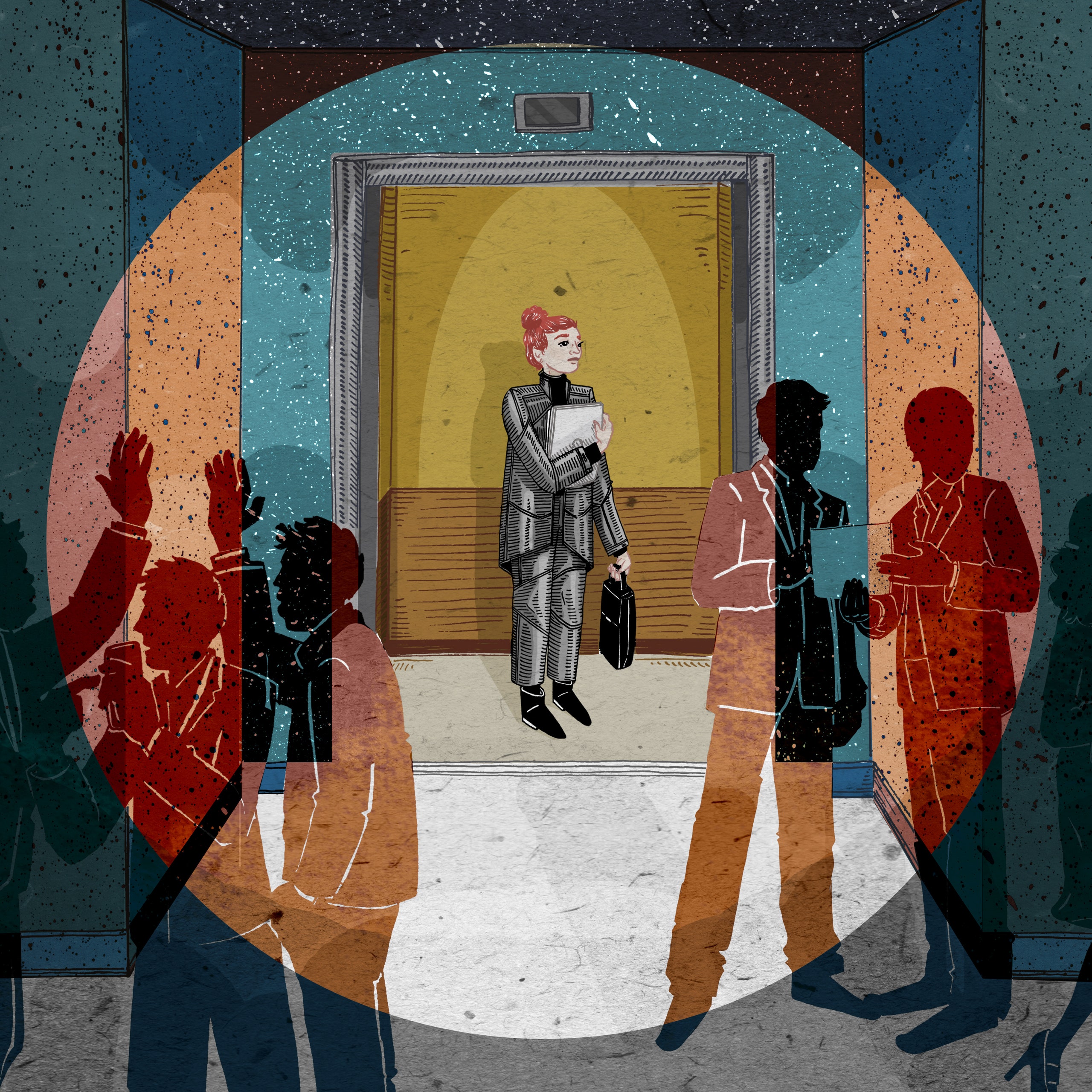 On the morning of my first day at my new job, I woke up nervous but excited. Anxious about being late, I quickly donned the outfit I’d chosen the night before, a black shirtdress that tied at the waist and fell just below the knee, work appropriate but also somewhat nondescript. I wanted to make a good first impression but not draw too much attention to myself while I got the lay of the land at my new office. I had always been partial to dresses for work, because they solve the outfit problem with one garment. But as my first week of work unfolded, I began to suspect dresses would not be the workwear staple they had been for me in the past.

My company, I soon found out, was a boys’ club. It was run by two college buddies, and the frat-house feel was still in full effect. If you were a white man who played sports in college, there was a good chance you would eventually be promoted to VP. If you didn’t fit this description, you might as well have been invisible. Women, even those who had “Senior” or “Manager” attached to their title, were treated like secretaries. This culture was odd to me, because I had been working in product development for various textile producers my entire adult life and had come to believe it was a field dominated by women. I was used to offices where I chatted with my coworkers about Rihanna, wedding plans, and fashion, and no one was concerned that showing interest in such topics could be a liability. At my new job, however, I quickly realized I was in uncharted territory when the VP of my department called me into his office and asked me if my husband (not me) would be interested in joining him and other VPs on a hunting trip.

It wasn’t just the hunting trip; there were so many unsubtle ways I was reminded that I wasn’t part of the power structure. I once had a VP laugh and say to me, “Why do we even bother hiring women?” My boss once told me to “just sit there and look pretty” in a meeting. I had to buy a Secret Santa gift for a director who listed his “favorite activity” on the gift-exchange questionnaire as “watching my wife cook and clean.” This is to say nothing of the complete lack of female representation in company leadership, executive lunch meetings at Hooters, and the daily grind of casually sexist comments such as describing certain cars as “girly” and making jokes about domestic violence.

Though I didn’t realize it consciously at the time, I started instinctively searching for structured jackets to wear to the office, garments that would cover my body more adequately, make me less soft, less vulnerable, less “womanly.” I had a nice collection of high heels that I had acquired over the years, and I couldn’t bring myself to wear any of them. I was also loath to don anything too tight or form-fitting. I did everything I could to downplay my sexuality, for fear that I would be seen as weak or, worse, invite inappropriate comments or leering. By contrast, in previous jobs, clothing had been a source of joy, a way of bonding with my coworkers. Noticing and complimenting each other’s outfits was a method of giving and receiving validation, which often led to longer conversations and sparked friendships.

I was raised a feminist. My mother had a well-worn copy of *Our Bodies, Ourselves* on our bookshelf growing up and a bumper sticker that read “Tip Over Patriarchy.” But I had always cherished traditionally feminine signifiers. I believed I should be able to wear as many pink floral frocks as I wanted and still be taken seriously. I spent a large portion of my early twenties making my own clothes, seeing it as a form of self-expression, and I started working in textiles precisely because of my interest in clothing.

But at this new job, I suddenly felt the essence of my identity, my femaleness, was under constant scrutiny. I had to temper my voice, my topics of conversation, every aspect of my appearance — to be less obviously female. At the same time, I had to become more fierce — repeating myself in meetings to overcome constant interruption, defending personal boundaries on a daily basis. One VP would routinely stop by my desk to chat, offering unsolicited, long-winded opinions on hot topics like “microaggressions” (he didn’t believe they were real, he informed me). My boss once slapped a 24-year-old female coworker on the ass right in front of me. It was like a living diorama of unexamined white male privilege, which would have been laughable if it hadn’t been so depressingly real.

I came to realize that while women had it bad, and women of color had it the worst (when they were even hired, which was rare), it wasn’t a healthy environment for anyone. These men were not happy; they were tense, unsmiling, red-faced, and bloated from being perpetually hungover. There was no reasoned conversation or collaborative exchange of ideas. Men shouted each other down and worked to undermine each other both overtly and in more underhanded ways, and then women were expected to quietly execute the commands of whoever had emerged as the alpha.

I had always thought the days when women wore big shoulder pads to work in order to look more masculine and be taken seriously, à la Melanie Griffith in *Working Girl*, were so passé. But when I was thrust into this environment, I began to wish I owned a power suit. I began to understand that clothing could be more than just an expression of personal style; it could be armor. More than anything, I fell into a confusion about what to wear, knowing that whether I dressed up or dressed down, I would still be afforded roughly the same significance as a neglected plant nestled in the corner of a conference room. I noticed other women in the office suffering from this same confusion, swinging wildly between looking overdressed and like they had given up. With #MeToo and Donald Trump’s administration shining a spotlight on the hostility that women still face, it’s (1) that power suits are back in (2). It’s as if women are searching for a magical garment that will somehow grant them the power they lack in their everyday lives.

I have moved on to a new job, and I no longer feel like I’m prepping for battle while getting dressed in the morning. Clothing choices seem easier to make when I’m not straining to defend my identity and autonomy on a daily basis. I am, however, more wary of being perceived as vulnerable. I’ll offset overtly girly items with more masculine pieces: high heels with a blazer, a pencil skirt with a top that’s more boxy and boyish. Most of the time I opt for a slightly androgynous uniform that involves some variation on a button-down shirt, black pants, and a flat shoe. I guess you could say it’s my version of a power suit. It might be boring, but it accomplishes what I need it to accomplish. And if this experience taught me anything, it’s that no matter how “empowered” I believe myself to be, there’s still so much work to be done.

*A.K. Watts is working on a novel about a family’s search for meaning in the aftermath of a communal living experiment in the 1970s.*