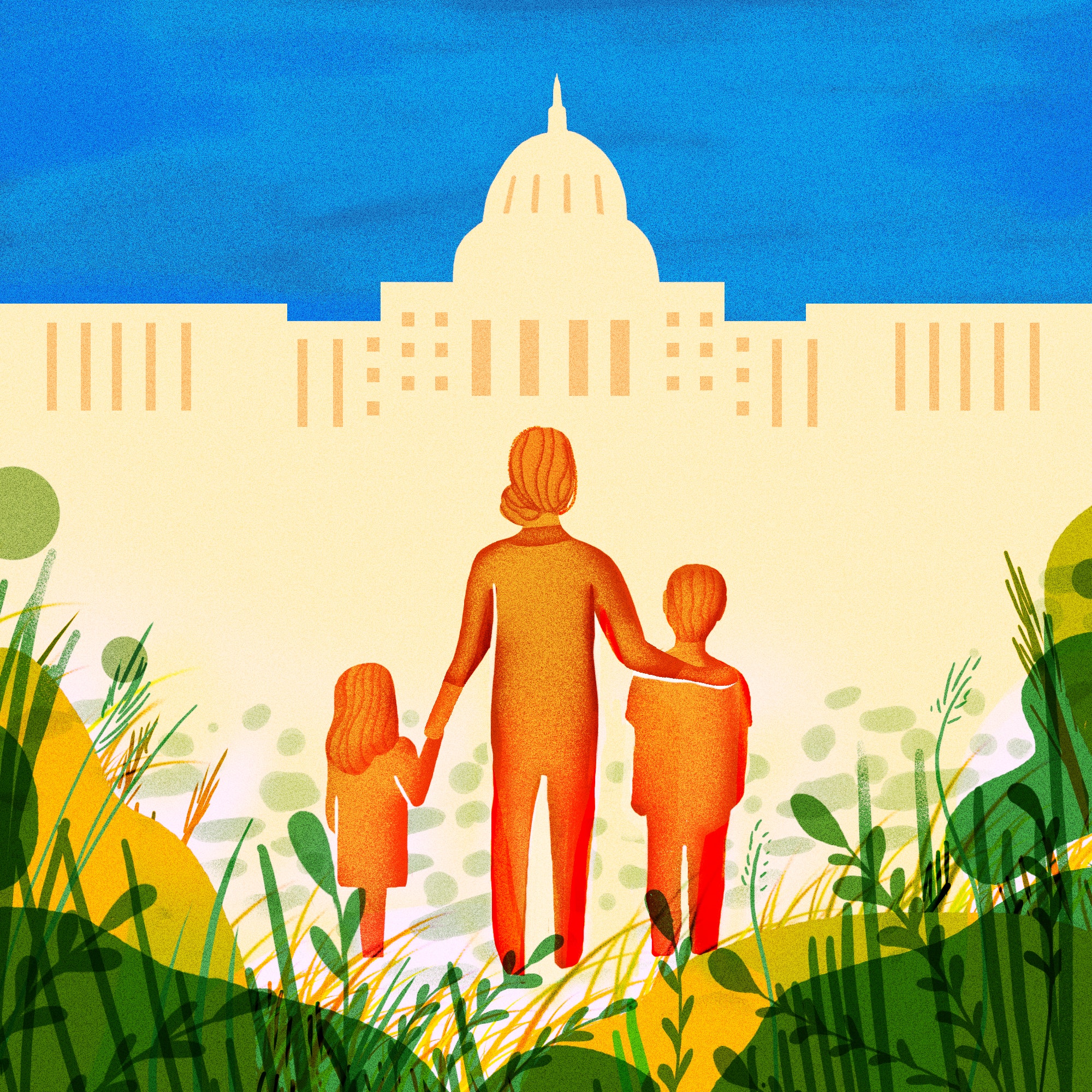 I was the first of my friends to get pregnant, or, rather, the first of my friends to carry a pregnancy to term. My son was born when I was 24, and we lived in a valley full of Aspen trees outside of Steamboat Springs, Colorado. Our studio cabin sat on a plateau within the largest elk-migration territory in North America. The sounds of their calls are burned into my memory.

It was 2008; my fiancé and I voted for Obama and had a sense that the future was promising, even though we struggled to pay off debt and always kept a hawk-like eye on our checking-account balance. He had a well-paying construction job, and I stopped working to care for our newborn. We skied and made babies. I grew lettuce and bought into my first CSA to feed our family the right way.

Then, everything changed. After the stock market crashed, my partner showed up for work, and the foreman offered everyone a beer, on a Monday morning. He wished them luck finding another job and said the owners would not finish building their vacation home anytime soon. They were on a flight to Europe to ride out the inevitable recession.

We couldn’t make ends meet. I was home with our infant, and he couldn’t find consistent work. We weren’t alone — good jobs like his ended abruptly all across the country. We had no choice but to pack up and drive back to the East Coast, where we had family and friends who could provide a soft landing and help us get back on our feet.

We moved in with his mom in northern New York. He worked for his uncle. I started a business. We were broke and missed Colorado. He drank more to mask what felt like a failure; I picked fights because I felt trapped. We had another baby and never got married. Eventually, our idyllic life crumbled. The house we lived in literally burned down and our relationship was over.

Fast-forward ten years: I’m a single mom, I own a house, and I’ve started two businesses. He built a beautiful home, married a gal, and lives down the street. We get along pretty well, and our kids are the kind who trick people into having their own.

Then came Trump and the urgency of flipping the House in 2018. My profile, though nontraditional in terms of a congressional candidate, was exactly the kind that could challenge a Washington insider with tenuous ties to our district in New York’s North Country region. New York’s 21st district went with Obama twice before swinging Trump. It’s an outsider’s district and exactly the kind of rural area where people voted for Bernie in the primary and then Trump out of spite. Voters from all parties were sick of feeling silenced, tired of being ignored, and extremely weary of the Establishment.

As an outsider candidate, I’m taking on the machinery of both parties. I am not the kind of person who is *supposed* to run for Congress. I don’t have the money, the résumé, or the connections. And that’s exactly why I’m running.

I understand the struggles my neighbors face: long winters and massive heating bills; a seasonal economy with seasonal work; a lack of quality, affordable housing; the high cost of good child care; and a terrible local transportation infrastructure. Rural life is hard, and it’s expensive being poor. I know what a $23 balance in my checking account feels like and how much those overdraft fees really cost.

I’m a working mother who qualifies for food stamps and heat assistance; my health-care plan is Medicaid. I wake up and field a storm of headlines and messages, to-dos and meetings — but first I have to get my kids fed and out the door. I have to remember hats, gloves, sneakers, water bottles, and notes for after-school programs and field trips. I have to raise money for my campaign around basketball practice, Girl Scouts, snow days, and birthday parties. I show up to events with Legos and slime in my purse, and I can hardly find the Twitter app on my phone because it’s camouflaged by unicorns, puppies, and Minecraft.

Most people in my community, especially young parents and business owners, support my effort to run as a working-class mother. Their help is invaluable; they recognize that I’m here to represent the masses of people who feel left out of our legislative process and are too busy surviving to participate at a state or federal level. But I field a lot of judgment and criticism as well.

A few women have even insisted I can’t claim to be a single mother since my kids’ dad is still in the picture. To them, I’m not “single-mom enough,” even though I don’t receive child support and constantly struggle to provide, without an extra set of hands on deck. The comments are brutal (and the worst are from other women), but I get it. What I’m doing challenges everything we’ve been told about how this process works and who is qualified. It challenges class and gender roles, perceptions and assumptions. For hundreds of years, only certain people have been accepted into the legislative fold and young women have been hugely underestimated, and change is pain.

But I have more conviction than ever. Sometimes things happen in such a way that you cannot deny they are happening for a reason, that the universe somehow supports you. This is exactly that kind of experience. Every time things get tough and I start to wonder what the hell I’m doing, something unexpectedly opens up as if to signal I can’t give up yet. I’m running to carve out a better future for my children; I’m fighting for a world in which people’s basic needs are being met. Only then can we achieve lasting and widespread social justice. This is hard, but it’s worth it.

It’s worth it when I see a seven-year-old girl at the Women’s March holding a sign that says “I Can Be President.” It’s beyond inspiring when a young mom asks me for a selfie before dashing home to get her son up from a nap, or when an elderly man walks across the street to tell me he’s voting for me because he can tell I’ll fight for him. And I know I’m on the right track when my nine-year-old says he wants to be just like me when he grows up. I guess there’s a first time for everything after all.

*Katie Wilson is an outspoken small-business owner, local community organizer, and single mother born and raised in the North Country, where she is running for Congress to represent the people of NY-21. (The primary is June 26; the general election is November 6.)*