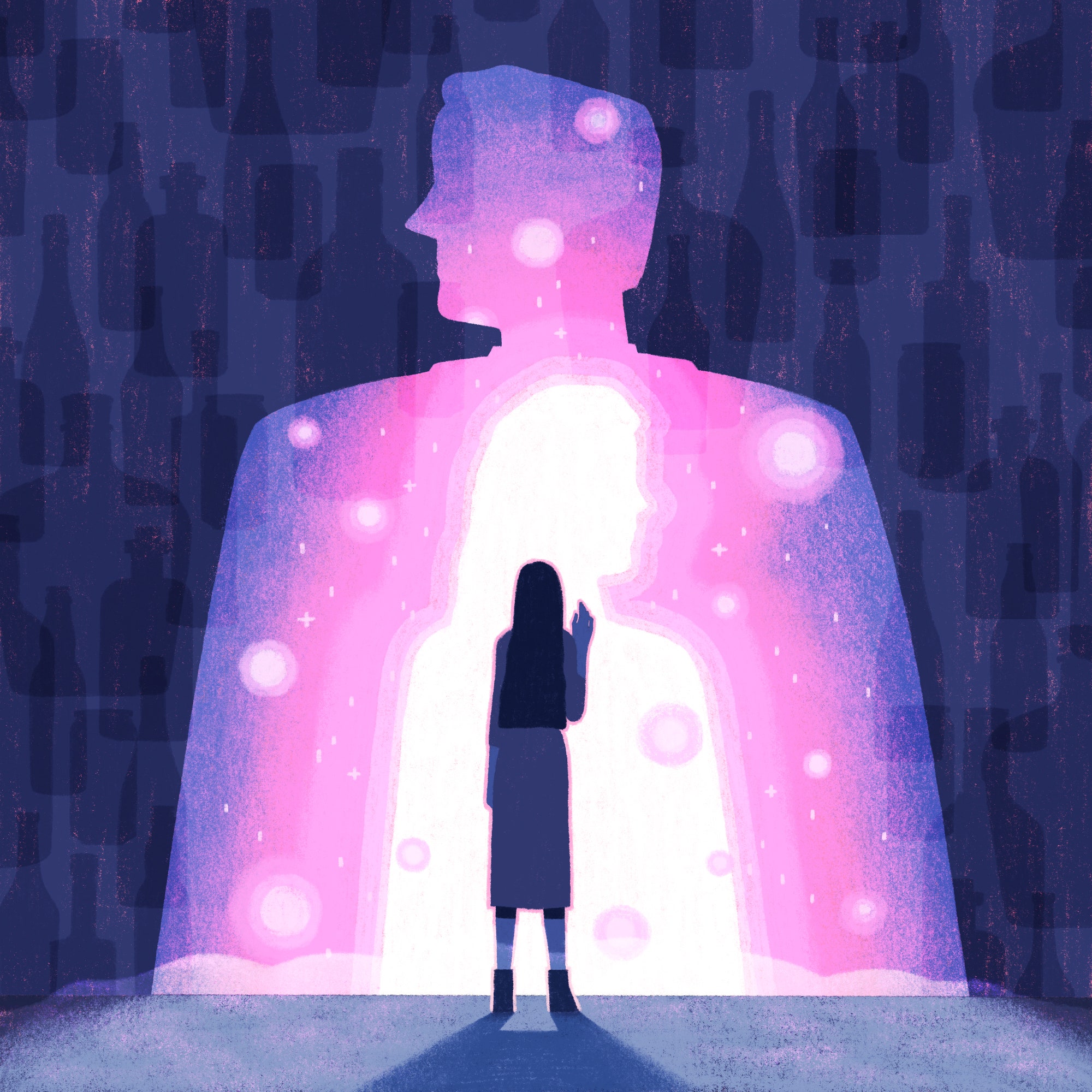 “It’s incredible,” a man I’ll call Charles murmured, “how much you remind me of your mother. You’re her incarnation. You *are* her.” He winked, picked up his champagne glass, and toasted my mom, whom he called “his Anita,” and that we were finally meeting after a lengthy correspondence in one of the many rooms of London’s famed Oriental Club.

I didn’t want to be anything like my mother, but I couldn’t tell Charles that. She’d died a few years earlier from alcoholism, and her worst attributes — her self-pity, quenchless thirst, and the strong smells of her fragile body — were what I remembered most vividly.

She hadn’t always been a drunk; she’d had a career in environmental policy, traveled the world, and bucked many of the expectations put on women of her generation. She’d also endured many losses, including the death of a child and husband, and she had used these tragedies as excuses for drinking, invoking them so often as bids for unconditional sympathy that they lost any gravity. I was angry with her for throwing her life away and mine into chaos.

Charles had met my mother in the 1970s, when she was living in London with my father and working for the Sierra Club and he was working for another conservation group. My birth, and her addiction, were still a long way off. In 2012, he’d Googled her and instead of finding a Facebook page populated by pictures of grandchildren had found her obituary.

When he reached out to share his condolences, he told me that my mother had “captivated his attention. She had glamour and warmth, intelligence and humor.” He also told me they were soul mates. His sentiments were startling, not only because they were so extreme, but because a year before, another man I’d never heard of, I’ll call him John, had told me the exact same things.

John entered my life as Charles did, by contacting me after looking up my mom and learning she’d died. He was a few years older than her, while Charles was a few younger, and though Charles had a fine education and pedigree, John had neither. But their sentiments were eerily similar. John also said that he and my mother were soul mates and told me that she’d been “an amazing and wonderful woman. So full of curiosity, so engaging.”

What they shared was intriguing, but I wondered how seriously I should take it, and them. It seemed impossible that my mother had once been as extraordinary as they said, so beguiling that she had bewitched two men for most of their lives. I told myself that my mother wasn’t the woman they’d known, but someone created from memories and fantasies they’d visited again and again until she became someone bigger, more perfect, more theirs. We traded emails for months until I finally decided to meet them so I could determine if they were lonely old kooks or people I could trust — Charles in that posh London club, John at a diner near his home in rural Pennsylvania.

After telling me about the work he’d done with my mother, Charles poured more champagne and took a long sip. “I suppose you’re wondering if there was any sort of intimacy between us.”

“It’s OK if you had an affair,” I told him. “No judgment.” I meant it. I knew my mother had had affairs when I was young, so it was easy to believe she’d also had them before I was born. I hadn’t liked my father and took her extramarital activities as a bit of comfort. She hadn’t liked him either.

Instead of telling me what had or hadn’t happened between them, he demurred. “Gentlemen don’t kiss and tell,” he said. “I would have liked to have been closer to her,” he continued. “She was so worldly. I didn’t feel I could match her achievements, certainly not then.”

I told him he shouldn’t have been intimidated. “She grew up very poor. My grandfather abandoned his family. My grandmother didn’t graduate high school and worked in a factory.” I wasn’t simply sharing details about my mother’s life — I was trying to correct him, to change his vision of my mother because it was so different than my own.

I wanted to believe he was mistaken because his impressions had been clouded by desire or because he’d been deceived by the intense charm I’d seen my mother deploy when she wanted something from people. But he’d worked with her, seen her mind in action, felt her passion. He couldn’t understand how and why she’d changed into the person I knew, while I couldn’t imagine my flawed mother being anyone else. But I knew he was right. She had been worldly and accomplished, but I’d chosen to forget that.

Where Charles had been flirtatious and cagey, John was fatherly and direct. Over plates of bland pasta, he told me they’d met during a hot Chicago summer. When his air-conditioning had given out, he’d sought refuge in the diner where my mother, still a student at the University of Chicago, worked. “We hit it off immediately. We talked for hours — it was almost like I had something dammed up and the dam just broke. She was so excited about what she was studying and everything she wanted to do.”

“We went on a few dates. It wasn’t ever said that it wouldn’t work out, but it was pretty obvious. Then she met your dad. I always thought she made the right decision. She had a life with financial security, travel, and intellectual accomplishments instead of a very simple life with me. But,” he mused, “she might have forced me in a different direction. Maybe I would be something that I’m not now.”

“Your mother always reminded me of the woman in Andrew Wyeth’s painting *Christina’s World*,” he continued. “I think it shows how limited our lives can be; one of the things I admired about your mom when I first met her was how interested she was in the world and how badly she wanted to see it.”

Christina was crippled by polio; she’s crawling across the field because she can’t walk. John couldn’t have known that for the last few years of her life, my mother also couldn’t use her legs. She drank so much that she developed “wet brain,” alcohol-induced brain damage that impeded her mobility so much that she had to crawl to the bathroom and go down the stairs on her butt.

Wyeth thought Christina was “limited physically but by no means spiritually” and tried to capture her “conquest of a life.” I wanted to tell John that my mother was nothing like Christina, that she lacked her strength and determination, and remind him that it was her actions that had caused her world to shrink, not illness. It was the same impulse I’d had with Charles, but I stopped myself. As John spoke about my mother, I’d found myself charmed by her. I knew that what he was telling me was true. She had been that vivacious and ambitious and had worked tirelessly in and out of school and had focused on attaining the rich life hovering out of her reach.

He told me that a few years before she’d died, he’d dreamed of her. “It was so vivid that the next morning, I looked her up. I called her, but I hung up before anyone answered. What was I going to say? ‘Hi Anita, this is John from like 50 years ago. How are you?’” He shook his head. “Maybe she was sitting there having too many drinks, wondering what happened to me. What-might-have-beens are a waste, but you still can’t help think about them. Maybe I could have helped, intervened in her sadness.”

His what-ifs reminded me of my own, and of the pain that came with them. I spent years encouraging my mother to quit drinking. I was always thinking of something else I could do, and after she died, I obsessed over what I hadn’t done, though I’d done a lot — I’d taken her to detox countless times, spent a week with her at rehab, and sat with her in her room and told her to volunteer, travel, do *something* that might reignite her interest in the world, as she drank and barely listened.

After my dinner with John, I returned to my dingy motel room and looked at the photographs of my mother I’d brought with me. Even when she wasn’t smiling, she was radiant.

John’s and Charles’s memories of my mother were intertwined with dreams of a life, and a love, that had eluded them. They never had the chance to have the relationship with her that they’d wanted — if they had, she’d have inevitably disappointed them, not because she drank but because she was human. They would have hated her snoring, become annoyed by her eccentricities. The lack of such intimacy protected and preserved her, but this didn’t mean she hadn’t been everything they’d described.

Falling for my mother had been enjoyable and seductive in the moment, but as I sat alone with her pictures, those feelings gave way to a grief I hadn’t yet experienced. Admitting that my mother had once been so incredible made her decline even more upsetting.

Bewitching Charles and John for decades was hardly my mother’s most impressive accomplishment, but it was one of her most humanizing. I was proud that she’d made such an impression and wished I could be someone so extraordinary and affecting. My effort to insulate myself from additional pain by dismissing her had prevented me from seeing everything that my mother had been. The picture I was left with was still messy, but it was more colorful and vibrant than it had been before. It was complete.