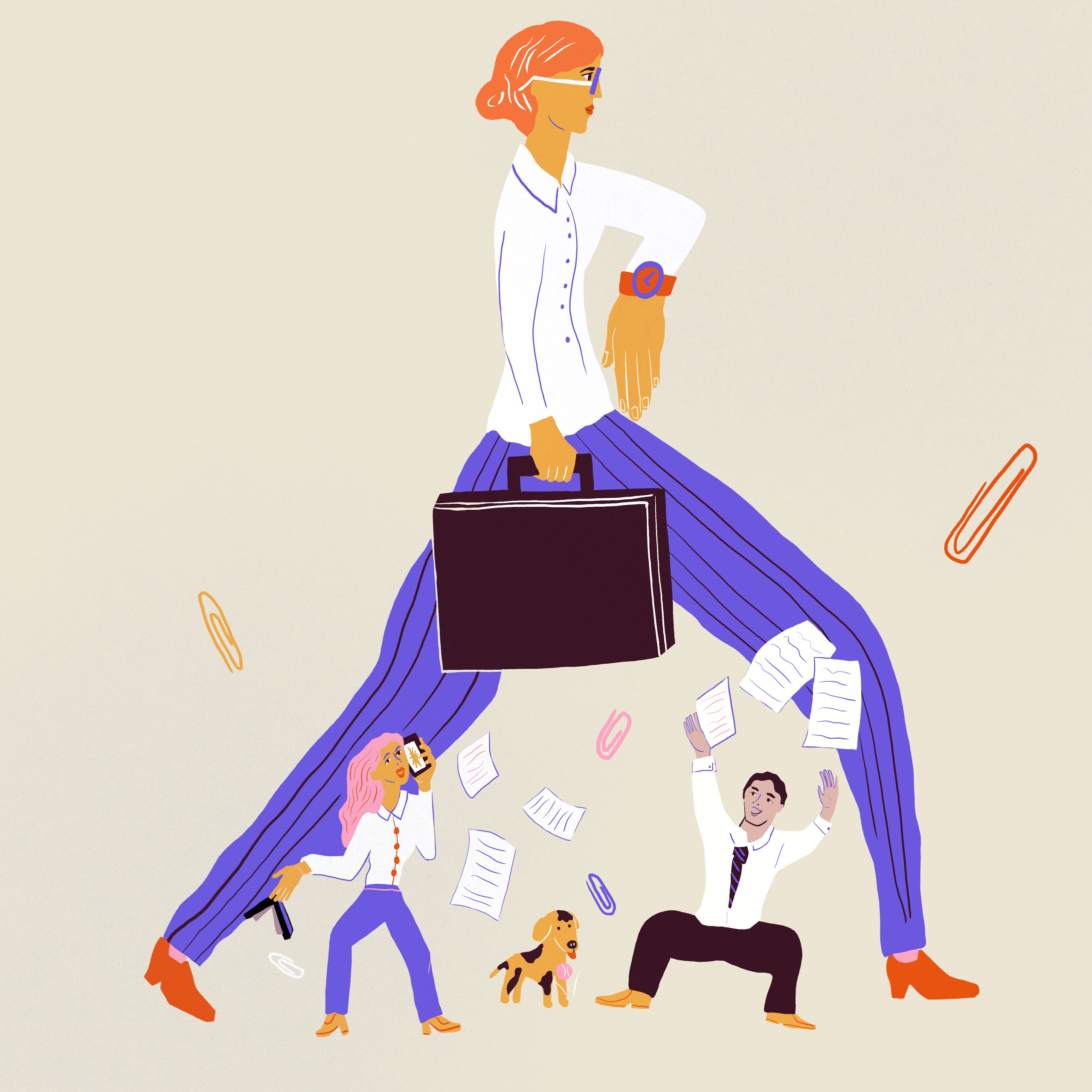 I refuse to be the office Den Mother. True, I’m perfectly suited for the position: middle-aged, middle manager, generally forgiving, with a deep understanding of my business (corporate communications). Also true: I’m a mother in real life. But of all the roles I’ve played in my career — and after several decades in management consulting, there’ve been several — Den Mother would be the absolute worst.

The requirements for Den Mother are surprisingly steep: maturity (though not necessarily age; I’m 54, which is more typical, but I’ve seen women as young as 23 get saddled with the position), a take-charge attitude, a willingness to arrive early and stay late, and the ability to get shit done with no complaint. (Den Mothers often double as Martyrs; more vocal female employees are generally ignored, or scoffed at, then ignored, or sent on long business trips and ignored from afar.) And yet, despite the high bar for entry, a Den Mother’s work is demeaning and her rewards are meager.

If I agreed to be Den Mother, along with performing my own job, I would be expected to clean up everyone else’s messes — in the communal kitchen, on the shared-file drive, with pissed-off clients — while teaching my adult colleagues the difference between right and wrong. (“Bob, we don’t clip our toenails at our desks.* The office is a public space.” “Sally? Sally? Sally! Put down your phone. We’re in a meeting.”) I’m supposed to be the older, frumpy, shapeless, sexless female who always has a stapler, never raises her voice, and pesters the team to submit their expenses. But I won’t do it. Yes, I’m a feminist. Yes, sexual harassment disgusts me. But I am too fucking busy to be the in-house cop. *You’re grown-ups*, I find myself shouting (silently). *You should know how to act.*

It wasn’t always this way. When I was first starting out, raring-to-go, eager-to-please, and thrilled to have a job, I was grateful to play the Dutiful Daughter. I love my father — I love men in general — so when my (mostly male, mostly older) bosses offered insight and guidance, I accepted their help with grace and humility. Same with female managers — over the years, I’ve had a series of women mentors whom I have admired and emulated and whose advice I still seek. The Dutiful Daughter was a youthful phase, and like youth, it ended quickly, with a bittersweet sting.

By my late twenties/early 30s, I was evolving into the Ingénue. Smart, savvy, and indefatigable, I was happy to flirt and to feign delight when more senior men (and occasionally women) showed interest in my work — and in me. Sure, there were inappropriate overtures and questionable behavior, but that’s a different conversation. Single, childless, and ambitious as hell, I lived fearlessly, saying yes, yes, yes, *I’d love to*, whether it was a swanky client dinner or a last-minute trip overseas. I understood my role and kept myself in check, especially when things crossed the line. (The Ingénue is alluring because she’s unattainable.) As long as she’s got looks, moxie, energy to burn, and nothing to lose, the Ingénue dazzles. But the clock is always ticking, and the party eventually ends.

By 37, the fun was winding down; exhaustion had settled in. I was pregnant, married with two stepdaughters, and still — always — working. Forty came, then 45, and suddenly I was the Beck-and-Call Girl who never said no. “*Thank God for you*,” my manager used to say. Then she’d pause. “Hey, do you mind taking over Entropy for Mike?” *Did I mind?* Of course not! Beck-and-Call Girls live to serve; we love being *productive*, feeling *important*, knowing we’re *vital to the operation*. Beck-and-Call Girl was a great role — at first. I made lots of money, was promoted several times, and if my coworkers found me bossy and overbearing, what did I care? In addition to kids, I had a second career as a novelist, so being bossy enabled me to triage my clients, my family, and my books.

But there were downsides. In business, success begets success, and work begets work, which means the more I did for Mike, Mark, Susan, and Celeste (and my kids and my husband), the less each one of them did for themselves. Along with turning in lousy first drafts, they skipped meetings and missed deadlines, knowing I’d pick up the slack. So I might’ve been thriving and flush, but I was also overworked, overwrought, and desperate for sleep. Beck-and-Call Girl was burning out.

Now, at 54, Den Mother beckons. These days I’m wedged between the executives and the junior staff. (Likewise, my kids are older, but my parents are, too.) Demands come from all directions. Some tasks I despise but they’re part of my job; I do them to stay employed: teaching associates how to answer the phone, reminding consultants to track their billable hours, nudging my boss to approve vendor bills.

It’s the other tasks I can’t abide, the ones I’m obliged to do simply because I’m a premenopausal female and (ostensibly) nonthreatening. I don’t know exactly when I crossed into Den Mother territory, but here are actual sentences I’ve said to my coworkers in recent months:

—No, you can’t bring your dog to the office; there are liability issues.

—Why do you keep arguing? Just do as I ask; we’ll discuss my reasons after the call.

—I don’t know why Lauren doesn’t like you; maybe it’s because you’re mean to her.

It’s not just trivial stuff, either. Now that the #MeToo movement is picking off predatory employees and has HR departments scrambling for cover, who do you think is expected to police bad behavior in the office day to day? That’s right — the Den Mothers; women of a certain age who, having survived our own #MeToo moments, are no longer taking any shit. We’re the ones expected to censor, interrupt, and confront offenders. (“Uh, Bob? Whipping out your penis during a performance review is inappropriate.”)

—Delegate: Team members are employees, not children; they’re getting paid, too.

—Give clear instructions, including deadlines, when assigning projects, so there’s no ambiguity in what I expect.

—Lead by example: Meet my deadlines, hit my sales targets, track my hours, and submit my expenses. This way, my solid performance eclipses my gender.

—Maintain boundaries: I only discuss my age, weight, pap-smear results, and Botox when I’m with other women of a certain age.

And you know what, younger colleagues? You shouldn’t be a Den Mother either. Not now, not ever. One thing I’ve learned in all my years of working (and mothering) is that people will step up when called upon. So the next time you’re thrust into a thankless role, follow my lead: Shake your head, move aside, let someone else bear the load. What happens next will amaze you.

**The original version of this essay appeared to make light of diabetic self-injections. Recognizing that Type 1 diabetes can be a life-threatening condition we have corrected this sentence.*

*Jillian Medoff is a senior consultant with the Segal Group as well as a novelist; her most recent book is* (1).