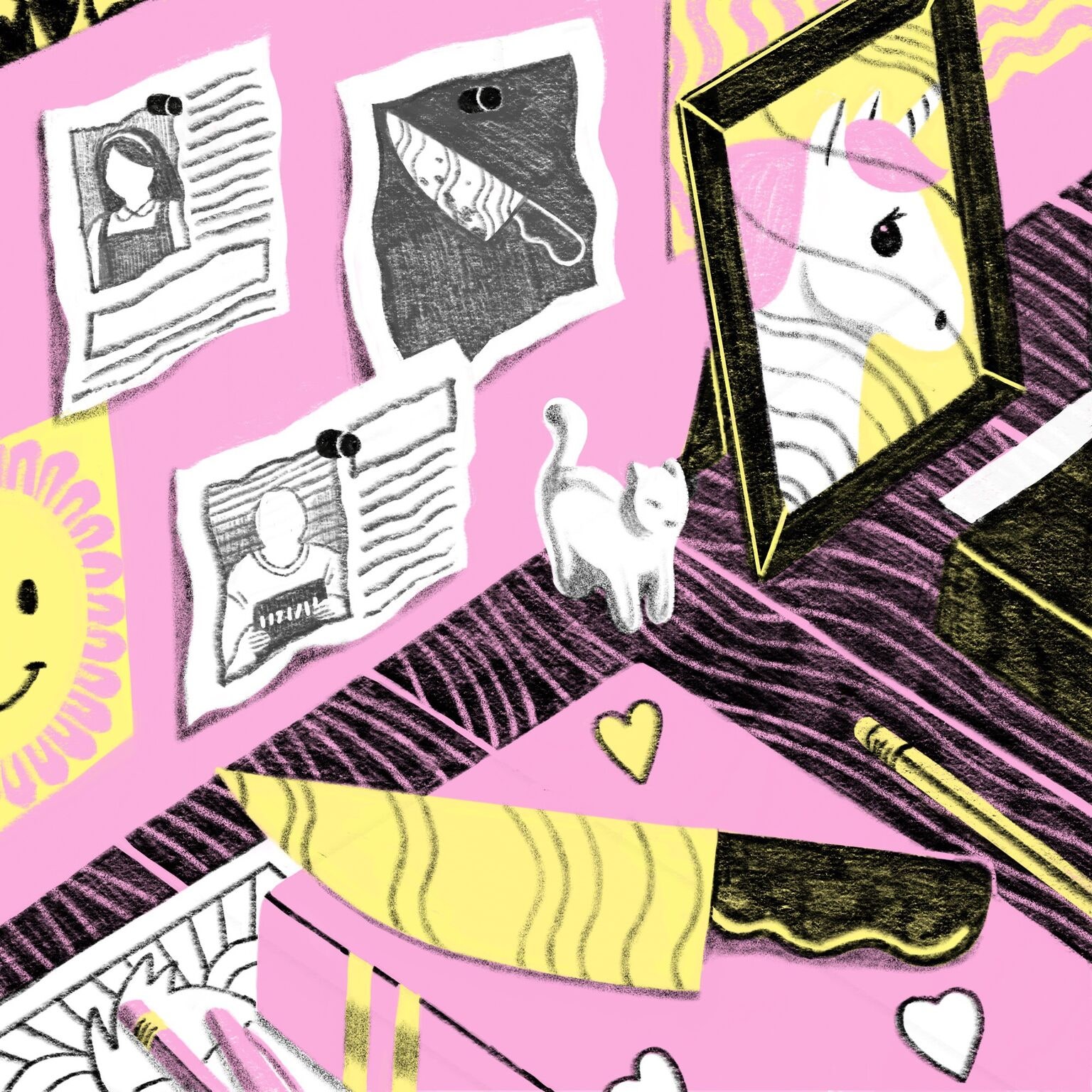 Gypsy and her mama, Dee Dee, shared a pink mess of a room. Walls and bedspread: bright pink, clashing just enough to make your eyes sting. Plastic bags full of shirts, sweatshirts, and wigs wait along the walls. Gypsy’s wigs. To the right of the bed, there’s a collage around a photo of a pretty curly-haired girl with her infant daughter. The blankets were piled up on the bed, on top of Dee Dee. Dee Dee couldn’t get out of bed. Her neck and back were slashed with a knife. Gypsy was nowhere to be found.

That particular crime-scene photo haunted my dreams for over a year as I made a film documenting the young girl who had her mother killed in the dead of night. I wake up most mornings with faint traces of blood in my mouth. When I’m dreaming about Dee Dee, I grind my teeth. My therapist keeps asking me why I am drawn to this type of work. I try to think back.

My fascination with the macabre started early. In high school, I could be found in my dimly lit bedroom devouring classics like _In Cold Blood_ and _Helter Skelter_ (while I was not mainlining _Buffy the Vampire Slayer_). I couldn’t look away. I went to an all-girls Catholic high school, and I remember feeling bereft of excitement. I didn’t smoke or chug 40s, but I did have an odd online habit that involved reading serial-killer origin stories late into the night. I wanted to figure out what defined evil, and whether a bad seed could be detected before he or she acted out in a violent, deadly way. Questioning these things made me feel less generic, (though I was completely generic).

It wasn’t uncommon. According to a 2010 study, ” (1),” women make up the majority of the true-crime audience for nonfiction. The study paints a fairly dark but unsurprising picture. As to why so many women gravitate toward these stories, “the answer may lie in fear of crime, as much research has shown that women fear becoming the victims of a crime more so than do men.” The authors also write that “by understanding why an individual decides to kill, a woman can learn the warning signs to watch for in a jealous lover or stranger.” I always felt I was doing research in preparation for something, but I didn’t know exactly what. I knew that I wanted to know what to do just in case something ever happened to me. A man gets very close to you on the street, his eyes staring into you, seeing what you will do next. What do you do? You quickly dial a number, you put your keys in between your knuckles. A game plan: we all need one, and I had the false illusion that I had control. But evil comes in all forms.

I started investigating the Dee Dee Blanchard case in August 2015, two months after her untimely passing. It wasn’t a typical case of matricide; it was something much more sinister. It was discovered after her death that Dee Dee had forced her then-eight-year-old daughter to pretend to be wheelchair-bound and mentally disabled to garner disability benefits from the government. It was shocking, but the question of why remained so much more interesting. How could someone do this to her child? I didn’t start with the crime scene. The circumstances of a death can tell only so much about the life that preceded it. And at first glance, there wasn’t much motive for anyone to end Dee Dee’s life.

Dee Dee Pitre met Rod Blanchard in 1990. After a few dates at the local bowling alley in their neighborhood of Lafourche Parish, Louisiana, they decided to go steady. Dee Dee soon became pregnant with a little girl, and she and Rod were married briefly. Rod was seventeen at the time and afraid of raising a child with this woman he barely knew. He left Dee Dee six months into her pregnancy. It was then, her friends and family say, that Dee Dee decided it would be this little girl and her versus the world. She was forced to move back into her folks’ house, and on July 27, 1991, Dee Dee’s daughter was born, small but healthy. She named her Gypsy Rose. But family members were quickly inundated with detailed medical calls from Dee Dee. Gypsy was having trouble breathing and needed a breathing monitor. Gypsy couldn’t see and needed expensive, prescription-strength glasses. The illnesses escalated. On Gypsy’s eighth birthday, she skinned her knee. After a trip to the hospital, Dee Dee informed her family that Gypsy couldn’t walk properly and needed a wheelchair.

> I wanted to figure out what defined evil, and whether a bad seed could be detected before he or she acted out in a violent, deadly way.

The family had had enough. Dee Dee had been acting erratically toward her stepmother, who was bedridden from some unknown disease. It was time for her to go. Dee Dee moved her little family in the middle of the night to a different part of Louisiana. The family would not hear from her again. When Hurricane Katrina decimated the state, Dee Dee spied an opportunity. Neighboring states reached out to the shelters, saying they had ample room for displaced Louisianians. Dee Dee took the offer and started the application process for a Habitat for Humanity house. It would be the perfect crime: Dee Dee would con money from charity organizations and keep asking Gypsy’s dad for child support to make sure the bills were paid while she didn’t work. The perks turned out to be pretty fantastic: free trips to Disney World, an invitation to meet the cast and crew of the _Harry Potter_ franchise, the list went on.

I pitched the story to HBO Documentary Films prior to filming, and they told me to keep on it. No one had ever heard a tale like it. It was an unproven story the mainstream press, besides Michelle Dean in BuzzFeed, had missed. I showed Sara, our supervising producer, an image of the mother and daughter holding each other on the couch. There was enough there to investigate. I had a somewhat-proven track record in the crime space with my first film, _Thought Crimes: the Case of the Cannibal Cop_. I made contact and filmed with Gypsy’s dad and stepmom. They showed me pictures of the bespectacled little girl in a purple wheelchair, most often smiling ear to ear in her pictures. I was captivated.

In May 2016, Gypsy’s lawyer, Mike Stanfield, agreed to let me speak with her, with no cameras to test out how it felt. He would remain next to us, providing the cautious counsel you’d expect for a client facing life in prison for the murder of her mother.

The inmate visitation room at the Greene County Jail is small, painted light blue, and split in two by a pane of glass at its center. I waited for Gypsy to appear on the other side of this bulletproof glass. I looked down at my notebook, a reporter’s notebook, one of my recently departed dad’s. He bought in bulk, and his wife, my stepmom, gave a couple away to his nearest and dearest to write their own stories on. I naturally thought I should have three.

I questioned the likelihood of success. An in-person, written interview like this would certainly help with getting a video interview, but nothing was certain. I thought back to my first visits to a jail cell at a federal facility in lower Manhattan. I was there to meet Gilberto Valle, a cop convicted of conspiracy to kidnap, murder, and eat women he knew. I called my dad after every visit. It was quite odd. Any other parent I knew would be horrified, but there was my dad, rooting me on.

My dad, (2), taught us that no story was out of reach. When I chose to pursue documentary, he told me I would be unstoppable. I don’t know how many young women were told that, but I never questioned it. I would go after a story, even if it made me feel uncomfortable. I remember walking out of the prison where I had met Gil and calling my dad. He picked up after the second ring. “Hey, dolly, how did it go? What was he like?” I paused and said, “Well, it was definitely very weird, but I don’t think he is who they made him out to be.” Gil was meek and polite in our early interactions. My dad told me to be careful but encouraged me to keep visiting the prison.

My extended family felt differently. At my dad’s wake, an uncle asked me, “Do you think you can do anything a little lighter?” I laughed in response and shook my head. “I don’t think so.” Crime stories captivated me, and so here I was, seeking them out, as a documentary filmmaker, woman, and just plain curious person. I had the luxury of making films about things I personally found interesting. How many people can say that? After my first movie, I didn’t go back to the security of a full-time gig. I set out to find my next crime.

When I uncovered the Gypsy story, I knew I had found work for the next couple of years of my life. She came in and eyed me nervously. Mike introduced us. She said, “Hi, Miss Erin,” in a timid, high-pitched voice. I noticed glitter on her face. She told me she’d created the effect by pressing a greeting card onto her skin. She wanted to look nice for our chat, ever the well-mannered Southern girl. I started small: “Have you ever seen a documentary before?” She looked down, searching through her memory. “No, I don’t think I have.” I told Gypsy her story would make a great one. And we were off.

_Erin Lee Carr is a writer and director._ Mommy Dead and Dearest _will air on HBO the day after Mother’s Day, May 15, 2017. Her forthcoming memoir_ All That Is Left Behind _will be printed in 2017 for Ballantine, an imprint of Random House._