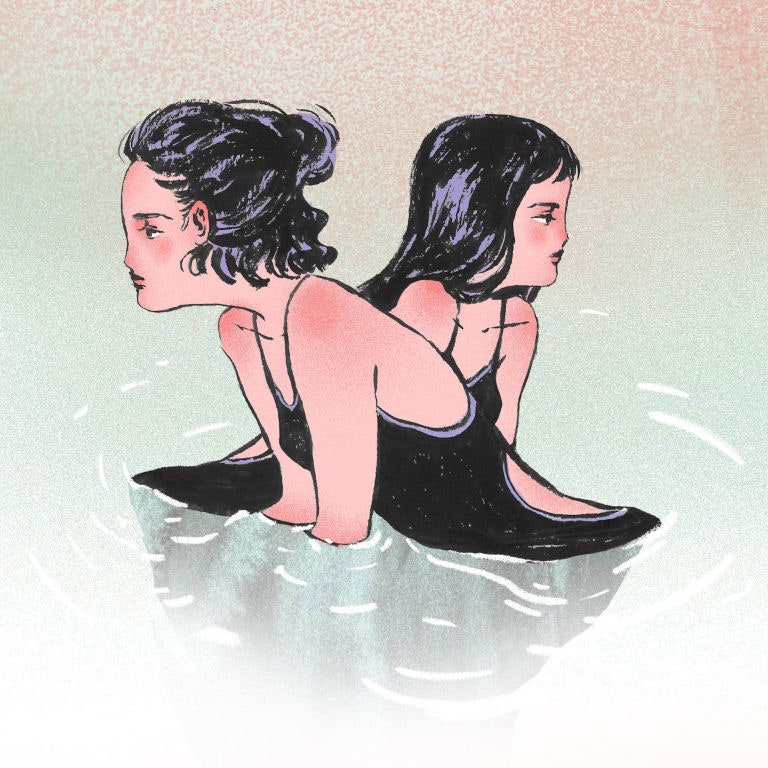 My doppelgänger has stronger thighs than I do. I know this because we are cycling on the outskirts of Berlin, and although everyone says Berlin is flat, that is a lie. There are “gentle” slopes, and my legs and lungs are burning with fatigue. However, every time my doppelgänger turns around on her bike to check on me, I force a smile, slow my breath, and pretend that my quads aren’t on fire.

My doppelgänger’s name is also Jessica. We were both going to be named Michelle before our respective mothers decided at the last minute that no, we were to be Jessicas.We are both half-Chinese, the same age, and have best friends named Rachel (my Rachel is a YA author, hers is a YA librarian). We are both living very far from home, an entire ocean away from the countries where we were born. We are both writers who have recently published memoirs. And we both turn red with Asian glow when we drink gin.

It’s May, and I walk into my local bookstore in London to hunt for a book I read about in the Guardian. * (3)* is a memoir about a woman who swims in 52 lakes around Berlin to get over her heartbreak and learn how to be alone.

As soon as I buy the book, I flip to the author photo, and there she is. Jessica J Lee, the doppelgänger to me, Jessica L Pan. I can instantly tell that she is also half-Chinese and around my age. I read her book on the train and at home, underlining the passages that I love, those I wish I’d written, and the uncanny similarities between our lives. By the time I finish, most of the book is underlined.

I’m struck by Jessica’s lyrical language but also by her bravery: for the most part, she swims alone, even during the coldest days in winter, taking long train rides and cycling for miles so that she can crack through the ice with a hammer and plunge into the cold water of unfamiliar lakes. I read her book and think: *I used to be fearless; I’m not fearless anymore.* And also: I want to swim in a lake. I want to cycle far away and walk through a forest. And I want to meet her.

Jessica J Lee is Canadian but now lives in Berlin, which is fitting: the word *doppelgänger*, meaning “double walker” or “ghostly spirit,” originated in German language. When I finish reading her memoir, I look at her author photo again. “I will meet you, and I will swim with you,” I tell the photo.

*Black Swan. Adaptation. Vertigo.* Anything by David Lynch. In the movies, the twin version or double of yourself always tries to kill you or replace you, but this doesn’t deter me. After all, when you find out about your doppelgänger, you have to at least try to meet them. Wouldn’t you?

In August, I fly from London to Berlin the day before I’m to meet Jessica. Walking to my hotel in the summer air along the quiet city streets, there’s an instantaneous crackling feeling: I could become someone different here, someone more interesting or adventurous or smarter. Better.

The next morning, we meet, a bit awkwardly, outside her studio flat. Jessica J Lee has jet-black hair and green-gray eyes to my dark-brown hair and brown eyes. These are the first differences.

She shows me the purple bike she rented for me. “The guy at the bike shop said that if you were any shorter, he’d have to get a children’s bike.” That’s because Germans are tall, and I’m 5’2″. Jessica is 5’6″. The second difference.

We have breakfast at a cozy American diner, with coffee and hash browns. Despite the unusual situation, the conversation flows seamlessly, partly because Jessica has a knack for saying things that make me like her instantly: “I am passionate about junk food” or “I miss my friends that I can just climb into bed with and watch *Gilmore Girls*.” She may just be trying to lure me in to a false sense of calmness so she can steal my identity, David Lynch style, but I don’t care. I’m falling for it.

After breakfast, we climb on our bikes and cycle to Alexanderplatz, where we board a train to Spandau, a borough in the west of Berlin. After the half-hour train journey, we’re back on our bikes and cycling for 40 minutes more to reach Sacrower See, a lake near the western border of the former Berlin Wall. I try desperately to keep up with Jessica, but she slowly pulls away, and I become angry at myself for straggling behind. *Cycle faster*, I say to myself, panting. *Catch up to her. Catch her.*

As I struggle up a slight hill, it strikes me as so typical that I have both fallen in love with my doppelgänger and want to vanquish her.

Finally, we reach a clearing in the forest, hop off our bikes, and enter the enclave of trees surrounding the lake. As we walk, we compare stories about how we got into writing and how choosing to write makes us relatively poor. We agree that for now, it’s worth it, but we wonder if we will ever own homes.

Our shared worries comfort me, but nevertheless, I can’t help but study Jessica carefully. She has a Ph.D. in environmental history and stops to point out different plants and leaves. I listen and think, *This is who I’d be if I were better at science.*

We reach a small clearing in the trees where we can walk into the lake and stop to swim here, where there is no one else around. We strip off our sweaty clothes and both reveal our plain, black one-piece swimsuits. We stand on the shore, looking out at the water.

“How do you do it? How do you just get in? Aren’t you scared of … the squish?” I ask, referring to the sludgy feeling under your feet, filled with unknown creatures that can grab you as you enter the water.

“Of course I’m scared of the squish!” she says. “But I know it’s just mud and weeds. And I know that soon I’ll be in the water.”

“You go first,” I say. She heads toward the lake and walks straight into the squish. I follow her — I face the squish and quickly push my body into the lake. I feel like I have suddenly entered a chapter in her book.

This is the real reason I am here. At this point in my life, every decision feels like there’s an insurmountable “squish” before reaching the water, and for some reason, I’m stuck. I am anxious and shy and seem to always be standing on the shore. I’d come here to meet her to figure out how to get back into the deep water.

Jessica grew up with a deep fear of open-water swimming — until one night, she strips off her clothes and walks straight into a lake in Nova Scotia alone, which sets off her frequent lake swims and eventually her book.

“How were you brave enough to do that when you were so scared before?” I ask her.

“I was in such a shitty place in my life, the fact that I was scared seemed irrelevant at that point. What else did I have to lose? Everything else felt so raw, and swimming could serve as a counter-balance,” she says.

After ten minutes, I’m slightly out of breath from fighting the water. We climb out and head for a sunny spot. We spread out on the grass by the shore, and then Jessica says the best sentence in the English language: “I brought snacks.” We eat boiled eggs and cheese sandwiches and apples, and everything tastes so good after the hot bike ride and cold swim.

I pull out a bag of mini Bounty bars, a chocolate-and-coconut candy bar sold in Europe.

“I love coconut,” she says. I knew she would say this because I love coconut, too. Also, I saw that she had mentioned it on Twitter.

“You should go to Thailand,” I say. “They put coconut in everything there.” Then I remember her botany background and the refrain of my brother Aaron, a paleo-botanist.

“But it’s not a native species. That’s something my older brother would say.”

“You know what?” Jessica says, taking a bite out of her Bounty bar. “We’re not native, either.”

Meeting Jessica confirms what I already knew, which is, of course, that we are not identical. Her writing is so beautiful and calm. She is the peaceful, smarter, more literary version of me. She is thoughtful; I am rash. I knew this, but before we met, I couldn’t help comparing myself to her anyway.

But as much as I want to put her on a pedestal, up with her literary memoir and her green eyes, she won’t let me. Her life hasn’t been perfect; she is the first one to point this out to me.

“When you were 24, you were living in Beijing having adventures. When I was 24, I was in London, miserable, in couples counseling with my now-ex-husband,” she says.

All told, we spend ten hours together, talking nearly nonstop. When we finally part ways back in central Berlin, I head to my hotel and flop onto the bed, exhausted from the vigorous activities of the day. My brain floods with doubts again.

Jessica and I have the same name, the same race, nearly the same number of years under our belts. The same swimsuit, the same green Nalgene water bottle. We both lived in London, overlapping briefly for a few months. *So why am I not better? Why isn’t my editor Margaret Atwood’s editor? Why am I the size of a German child?*

My friend Rachel wrote her master’s thesis on “the Double” and tells me that when you run into the double of yourself in literature or film, it is the unexpressed version of yourself. We are always going to wonder who we could have been if we’d taken a different turn. The Sliding Doors moment.

After meeting Jessica, I realize, this is how my life could have gone. The details are different, but the essentials remain the same. There’s a comfort to that — to meeting another version of yourself, who struggles the way you do and yet is brave, in spite of the fear.

I email my brother later that night. I send him just one line: “Are coconuts native to Thailand?” He writes back: “Originally from India, but they disperse well on their own across the ocean.”

I like that. Jessica J Lee and I are not native, but we’ve dispersed well on our own — me to Beijing and now London, and her to London and now Berlin. We’ve crossed oceans, passing each other — just for a moment — in mid-swim.