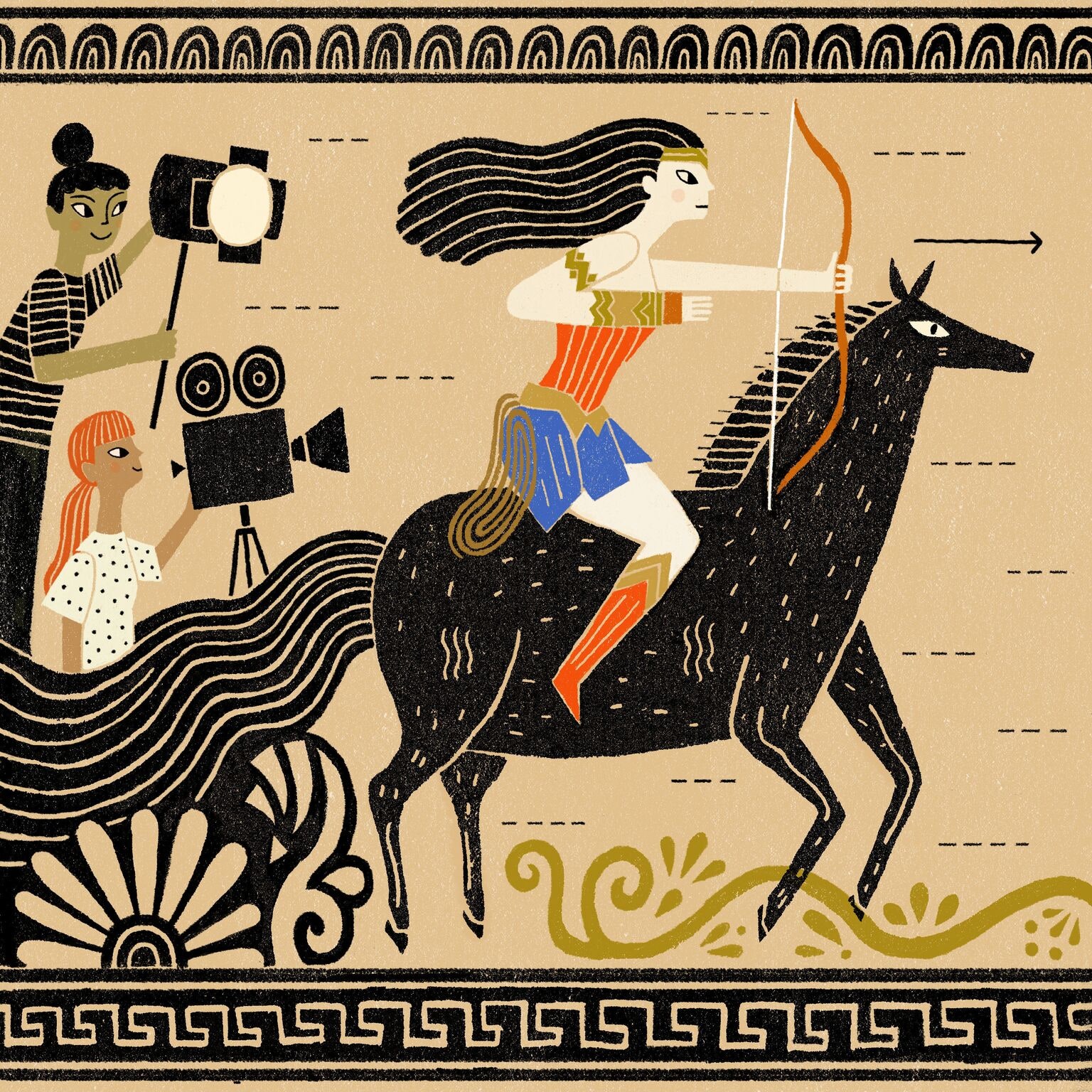 _Question: “So do you think this movie signals that Hollywood is moving toward making more films with female protagonists?”_

_Another: “Do you think things have gotten better for women in Hollywood?”_

I am sitting at a press junket for _Wonder Woman_ in 2017 but am hesitating to answer. I am remembering my first junket, for _Gladiator_ in the United States almost twenty years ago, when I was asked whether my playing strong female characters was signaling a change in Hollywood’s attitude toward women. My answer then was “Probably not.” I was right.

The act of getting _Wonder Woman_ made gives me some cautious hope. But will it change the system? Did _Mad Max: Fury Road_, _The Hunger Games,_ and _Insurgent_ change the system? Female directors’ participation in productions went down in 2016 from the previous year, so I am thinking it’s going to take more than that.

I know this because I have seen so many steps forward for feminism, only to be followed by a pushback against progress.

In Denmark, where I grew up, the second-wave feminism of the ’70s caused a profound reimagining of our education system. When I was not yet a teen, the rules were changed at my school and girls were required to learn woodworking while boys learned how to sew and cook. We had become participants in a new society of equals.

When I wasn’t learning how to handle a saw, I was reading new arrivals of feminist books at the local library. My brain was abuzz with ideas I realized could upend thousands of years of history. I got lost in groundbreaking fiction, like Marilyn French’s (1). Ann Oakley’s (2) taught me to question medical and biological assumptions about my gender. But the book with the most explosive effect on my young artistic mind was Kate Millett’s (3)_,_ with its revolutionary critique of the “heroic” male. Her elegant and witty prose dared to demolish sacred cows of modern literature and film.

Fully inhabiting the change around us, my father, a weapons sergeant in the home army, took me along on NATO military maneuvers, where I got the worst sentry postings just to prove to me that neither my gender nor nepotism would spare me from cold and fatigue. When I left home, he looked solemnly at me and said, “There is not a thing on this earth you cannot do, my daughter.”

When I moved to the United States at 31, it was clear as day we were not moving quite that quickly toward a brave — equal — new world. I saw plenty of misogyny. Even as my career took off, I was all too aware men’s roles were central to the dramatic arc in ways that invariably produced weaker material for female actors.

I couldn’t understand what had happened to Hollywood. The movies made during my great-grandmother’s time had featured incredible female leads. But in the 1990s, as women were slowly moving into real social power, it seemed the subconscious mind of society was reacting by producing films that were made to promote a sort of über-man. My interests, experiences, and viewpoint, as a human and as a woman, were rarely reflected on-screen. It turned out the whole world needed more persuading that equality was a right.

In my life, and in the lives of my mother, grandmother, and great-grandmother, are written stories of 120 years of feminism. Our lives illuminate the three waves of feminism that preceded this latest one, and how each wave was followed by a counterreaction during which some of the progress was lost.

_Question: Who is the Wonder Woman in your life?_

I think for a minute, but Olga comes to mind immediately.

My great-grandmother Olga, born in 1897, came of age during the first wave of feminism, the age of emancipation and getting the vote. She was imperious and irrepressible, a concert pianist with a famous temper. She married my great-grandfather, Herluf, a son of movie-theater owners. Together they built a luxury theater called PalæTeatret in the north of Denmark and even made their own movies. Together, they traveled to Copenhagen, Berlin, and Paris to buy films for their theater; raised four children; and built a handsome villa for their brood.

But all too soon, Herluf died, leaving my great-grandmother to manage everything alone. Somehow she found time to raise her kids, run a business, ride her beloved horses, help the resistance during the Second World War, and win silver trophies for her considerable sharpshooting talents, all while managing various ill-fated love affairs.

> I have seen so many steps forward for feminism, only to be followed by a pushback against progress.

On the walls of my childhood home hung black-and-white pictures of Olga in the arms of dashing actors during visits to film sets. I noticed how intimidated the husbands in the family were when Olga was coming to visit. Family members told hushed stories about Olga setting fire to a store she had given to a cheating lover — and calmly insisting to the fire brigade that it should burn. Olga had grabbed the reins of her freedom and created a life in which she provided for her children and satisfied her intellectual, business, social, and athletic interests.

My grandmother Eva was not as lucky. Throughout most of her life, women’s rights were bogged down in a social backlash and the nitty-gritty negotiations for equal wages and representation —and Eva, a union rep for nurse’s aides, was in the trenches. Abandoned by her husband while pregnant with her second child, she suffered the social exclusion reserved for divorcées during the conservative 1950s. She fought for equality and respect without fear or regret, but progress came at a cost for foot soldiers like her. Eva’s was an angry feminism nurtured on the serious, gendered injustice that remained even in social democracies.

A backlash against feminism had taken hold in the postwar era, sending women back to house and hearth, but Olga and Eva held steady. It was my mother, born in 1945, who was really deeply affected.

Scarred by her father’s abandonment and her mother’s struggles and pregnant with me at the tender age of eighteen, she eschewed an education and sought protection. Just as the second wave of feminism was liberating women from the stifling conformism of the 50s she had imbibed as a young girl — burning bras, freeing sexuality, and shortening skirts — my mother married my father in exchange for respectability, converted to Mormonism, and proceeded to have three more children before she turned 28.

Inherently flamboyant and beautiful, she tried hard to blend into the small town she moved us to when she was 27, but she failed miserably and seemed like a unicorn among horses. She showed up at my school in full hunting attire and Dior-red nails to deliver my forgotten lunch box.

By the time I turned thirteen, I saw her energies flag, and she parked herself indefinitely in an armchair. Her frustrated dreams were given free flight during Valium-numbed afternoons buried deep in Barbara Cartland novels. The little pink pills she chewed to overcome severe depression made her distant and unreachable.

Then, a miracle happened. My mother discovered amateur acting and became the principal female lead of the annual political revue. Onstage, my mother glowed and grew in my eyes as from her heart poured real talent. For a few years, it seemed she had found her true self and experienced a delayed empowerment.

But those bright moments stand in contrast to the shadows of a debilitating cycle of depression that dogged most of her life. Her youth was spent raising children, but she craved artistic recognition. Her career, as it was, never took off: she lacked education and access but perhaps most of all the courage to go for broke. Olga and Eva were reminders to her of a former glory she had fled. She died at 68, nominally of sepsis, but I knew she was too tired to go on.

In my home, there are my great-grandmother’s silver sharpshooter trophies, my grandmother’s jewelry, and a poster from my mother’s revue, and in my mind I see in their stories the ebbs and flows of the waves of feminism, its victories and its setbacks. I am experiencing the fourth wave and am proud to be a part of the first female-superhero film ever directed by a woman.

_Question: Does this movie signal that Hollywood is ready to make more films with female protagonists?_

Answer: If _Wonder Woman_ makes a lot of money, if structural changes are made in the business models of studios and financiers, if more women become reviewers and distributors, and if we refuse to take a step back, again, then… yes.

_Connie Nielsen is an actor; the president and co-founder of Human Needs Project, an NGO that provides infrastructure for people living in slums; and the founder of Road to Freedom Scholarships, a nonprofit that educates children living in slums._