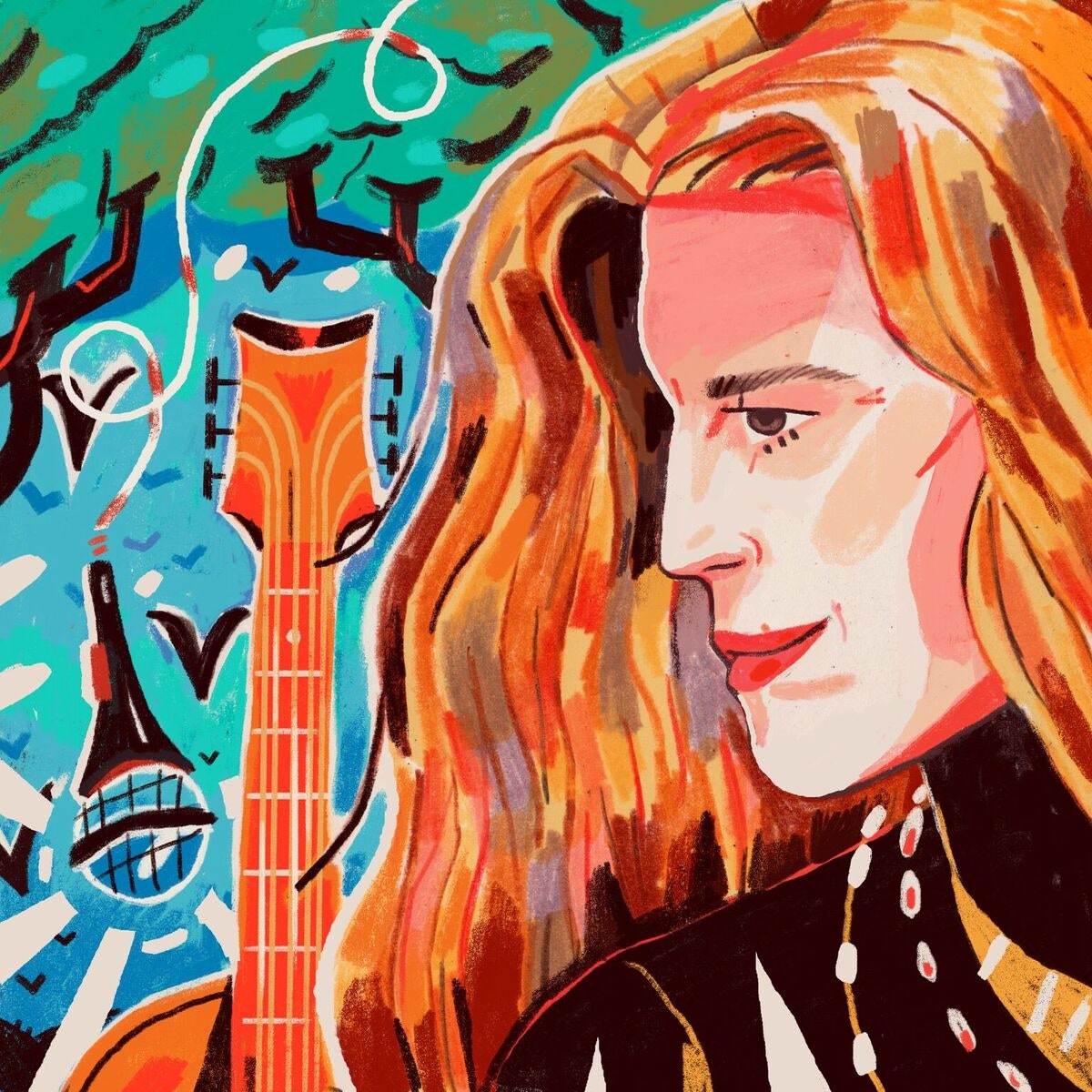 In 1992, Sophie B. Hawkins released her first single, “Damn I Wish I Was Your Lover,” from her debut album, _Tongues and Tails._ MTV banned the song’s original music video, in which Hawkins wore very little and danced quite a lot (the second version featured Hawkins in boot-cut jeans and a sleeveless plaid button-down, dancing somewhat less “suggestively”). This scandal only increased the song’s cult status. Additionally, Hawkins publicly identified herself as “omnisexual,” long before anyone knew what the fuck that meant (do people even know now?).

This was four years before the first Lilith Fair, a concert tour featuring only female solo artists and female-led bands, which probably explains why Hawkins was seen as something of an iconoclast. Not that the subsequent rise of women singer-songwriters would have made a more suitable home for Hawkins; she staunchly refused to identify with a set notion of “femaleness,” either in herself or for her sexual and romantic partners. We talked about love, aging, and the perpetual failure of art-making, and I was impressed by her candidness. She seems genuinely invested in continuing to change and learn, for as long as she can.

**Grace Dunham:** I heard you’re in the process of working on two projects right now, a musical and a new album?

**Sophie B. Hawkins:** So the album is technically finished. It’s a matter of rerecording certain songs, and then there’s the stuff that didn’t make the album, which may turn out to be better than the album itself. I’ve written a lot of songs for the musical, but I’m working on the book now.

**SBH:** The only thing I _don’t_ want to tell you is the story line, because it’s so close to me. But it’s got several layers …

**GD:** I don’t need to know! I trust that you’re keeping it a secret because you need to.

**SBH:** My first album came out, and it was a whole life’s work in there. It’s kind of like that with this musical. There’s not one day that I don’t love working on it, even when I get notes from my director telling me to tear the whole thing apart.

**GD:** With your first album, you had some huge hits. How do you reckon with that as you move forward and try to keep growing as an artist? Does it ever feel like something that keeps you trapped?

**SBH:** I always felt I had things to say and to live out. I never knew how I was going to get them out. It was so challenging to figure that out. Recently, I’ve started to understand that I have something lasting to offer, that I can keep contributing. It makes me feel so good when I sit down to work. It doesn’t feel like something to contend with; it feels like something that makes me happy.

Also, I’m single. I often wonder if there’s ever gonna be anyone who will fall in love with me, who will be my equal. I went to a certain place, and then I felt like I was on a steady line for too long in my relationship, fighting battles that were really somebody else’s battles. And then I finally got to break away, and five years later, I feel free and excited. Really simple and open.

**GD:** As a young person, I often hope that with time, I’ll be less preoccupied with those questions, of finding someone to love, to be loved by …

**SBH:** But now it’s a different kind of quality that I’m looking for; it’s a different kind of relationship. Now I don’t get involved with other people’s problems, like jealousy and possession. I can just walk away and say, I love you, but that’s not what I want to deal with. I’m telling you, there’s something about being in your 50s … sexually, you’re still everything, but you’ve let go of so much obligation.

**SBH:** There’s so much less insecurity.

**GD:** If someone drains you, you know to keep them out?

**SBH:** I’ve been drained to the absolute bottom. I definitely know the signals. And now I have friends that are really able to be honest with me. Because I think when we’re young, we project so much onto people. We have all these dreams from childhood we’re trying to fulfill with our lovers, and then once you can go through that, go through all the story lines, then it’s a beautiful new beginning.

**SBH:** In some ways, I have to say, my political motive is stronger now. When “Damn, I Wish I Was Your Lover” came out and I said I was omnisexual, I got so much backlash.

> The one thing that I would say about being an artist is that you have to keep choosing to fail.

**GD:** Why? Because people just weren’t ready for that language?

**SBH:** Yes! They wanted me to say “I am a lesbian” or “I am not.” Well, they probably wanted me to say “I am a lesbian.” And the fact that I would say “I am a lesbian, and I am all these other things” made them uncomfortable. What if I met a trans person and I fell in love with them, then what? That’s the whole thing about being omnisexual: it’s creative; it’s allowing myself to always keep growing. I want to give that permission to anybody I’m in love with. The whole point of it is that I identify my sexuality with my fantasies, my feelings, what I need to work out. I don’t identify my sexuality with another, individual person.

**GD:** I think you were ahead of your time, and maybe your audience, with that language and approach to sexuality.

**SBH:** I think you’re absolutely right. Your generation is in this creative, powerful, empowered, place. You know what needs to be done. You’re not answering to questions that aren’t relevant to you. My generation was dealing with all these authority figures and rebelling against them, rather than just saying, “This is what I’m going to do, and it’s going to be beautiful, and just you watch me.” Your generation is like, “Watch me. I’m going to do what I’m doing.” I love it so much.

**GD:** How do you feel about making work in this political moment?

**SBH:** There’s nothing like coming up against something to build, refine, and define yourselves. People are actually stronger than ever right now. Artists, activists, speaking with such a clear, sound voice against this dope, this dopey way of thinking. It demands the people be forceful. And we’re not going to be fooled. That’s another thing. Sometimes a person appears to be one thing, “the hope,” and then we realize there was no hope in that hope because that so-called hope wasn’t really disconnecting from the status quo. It was actually feeding off of the status quo. Well, now we can say, “Clearly, we know there’s no hope with this dope, so actually we are the hope.” I didn’t like the period of time where people looked at someone else and said, “That’s the hope.” It’s never true.

**SBH:** I don’t hate people; I love people. I want to understand why they think what they think. Then maybe we’re going to find this way of talking where I get to their inside heart. It always happens.

My mother reads Noam Chomsky; she brought us up on Howard Zinn. But I learned this from her, I think. She listens to people, and that only opens her ideas up more and more.

**GD:** Being open to connection, seeing what comes from that.

**SBH:** Most people are really terrified and feel like they don’t have a voice. There’s so much economic fear. And it’s real. How many people are on food stamps? How many people can’t get health care? How many people can’t get jobs? This is a scary time, and for people thinking about their future who are older, it’s scary too. I know lots of 50-year-old men who are white who don’t have jobs, who are looking for jobs. It is terrifying to them. They have health problems. And maybe they reached a different conclusion, but it’s all about that fear.

**GD:** I know that you just recently had a child. What did it mean to bring a child into this climate? Into the world as it is right now?

**SBH:** I just had Esther. I had Esther when I was 50. You don’t have to change children. They come in with a very strong idea that you really have to be nonjudgmental and loving and creative, that you have to love the earth. They feel that way automatically. So they think this is all ridiculous. Your child is a powerhouse.

**GD:** What advice do you have, as somebody who’s been making work for decades now, on how to sustain that kind of creative longevity?

**SBH:** I think the one thing that I would say about being an artist is that you have to keep choosing to fail. You cannot choose to succeed. If you succeed, you’re so lucky and it’s usually accidental. If you choose that you’re going to be willing to fail, you’re going to do great work. And so the disheartenedness can’t be because you’re not loved, you’re not succeeding. It can be because you’re tired, and you’re not getting enough food, you work too many jobs, you don’t have health care. That is something to complain about. But the other stuff, that’s just part of making art. I’d rather be surprised my work has an audience than sad it doesn’t.

_Grace Dunham is a writer and activist from New York City._