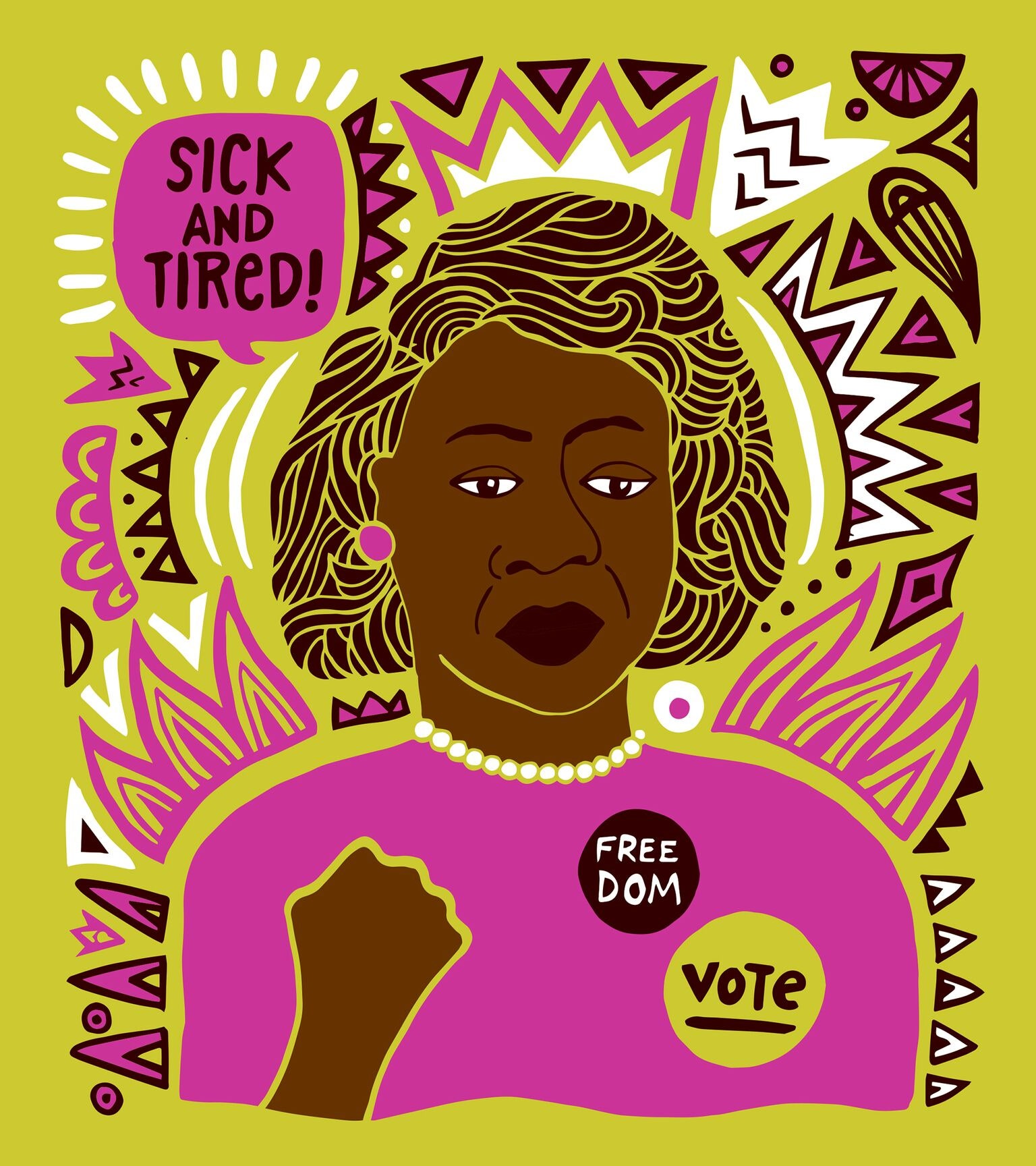 When I was growing up, I knew Fannie Lou Hamer as one of the faces on the six videotapes of _Eyes on the Prize,_ the PBS series about civil rights that sat in the drawers on top of my grandparents’ TV, beside my aunt’s bootleg tapes of ’80s shows like _Beauty and the Beast_ and _Star Trek: The Next Generation._ I listened to her voice break through the grainy footage.

My family trafficked in black-girl role models. My mother had (3) to heart, and so our whole house was a kind of celebration of black womanhood. We read books about black girls and listened to black girls on our tape cassettes and watched any music video with a black girl in it, however briefly, as they flickered across the television set. My mother, second-wave feminist that she was, would have been horrified to know that even our Barbies became a part of this pantheon of femininity — she thought they were cheap. Before she had me and my sisters, she’d sworn a Barbie doll would never make it into our house. But they were as much a part of this uplift as the set of reference books about historical black women that my grandmothers gave us. My Barbie had a bush of nappy hair that floated in a beautiful, black, peach-smelling cloud around her head. She led a crusade of brown and black Barbies against an evil warlord who was trying to take over their island full of women, located somewhere beneath my mother’s writing desk.

> We read books about black girls and listened to black girls on our tape cassettes and watched any music video with a black girl in it, however briefly, as they flickered across the television set.

So, in this abundance, Fannie Lou Hamer, sitting at a desk, speaking into a microphone, testifying about her fight to vote on the grainy screen, was lost to me in girlhood.

I’ve thought about her more recently. Hamer is the answer to nearly every question I’ve had about the state of the world in the past few years. Born nearly a hundred years ago, in 1917, to sharecropper parents in Mississippi, Hamer was the youngest of twenty children. She received only six years of schooling — she had to leave so she could work in the fields alongside her parents. Hamer married in 1945, but she was unable to have children. This is because the state of Mississippi had performed a hysterectomy on her without her consent — part of a eugenics program at the time to reduce the population of poor black people.

> I’ve thought about her more recently. Hamer is the answer to nearly every question I’ve had about the state of the world in the past few years.

Hamer became involved with the Regional Council of Negro Leadership in the 1950s, and then in the ’60s she became involved with the Student Nonviolent Coordinating Committee. In 1962, she registered to vote alongside other activists. The white overseer at the plantation where Hamer worked found out, and she was fired. Hamer eventually traveled around the state of Mississippi, registering other black people to vote. Because of this activism, white police officers detained Hamer and others and tortured them. White police officers ordered black prisoners to beat Hamer for them — she nearly died.

Eventually, Hamer was released and continued to register people to vote. In 1964, Hamer was part of a delegation to the Democratic National Convention called the Mississippi Freedom Democratic Party. Mississippi, of course, had a delegation already, but that delegation was all white and fiercely opposed to any civil rights. The DNC refused to seat the Mississippi Freedom Democratic Party, and Lyndon B. Johnson actively tried to censor Hamer — he scheduled press conferences for when she was giving testimony. Still, Hamer spoke out about the police’s attack on her.

> Eventually, Hamer was released and continued to register people to vote. In 1964, Hamer was part of a delegation to the Democratic National Convention called the Mississippi Freedom Democratic Party.

The one quote, the quote that was repeated to me growing up, the quote many know Hamer for, is from that testimony: “… _I question America. Is this America, the land of the free and the home of the brave, where we have to sleep with our telephones off the hooks because our lives be threatened daily because we want to live as decent human beings — in America?”_

Johnson and other Democratic officials continued to block the Mississippi Freedom Party at every turn. The DNC offered half-hearted compromises to the MFP, ignoring their basic request to be seated and vote. It was not until 1968 that the Party was seated, and in 1972, Hamer was elected a delegate. She began a farming cooperative in her county, the Freedom Farms Cooperative, and she was involved in implementing early versions of the Head Start program. The other quote she is famous for, the one that adults liked to quote in a self-satisfied way to me when I was younger, is the one that ended up on her gravestone after she passed in 1977: “I’m sick and tired of being sick and tired.”

A similar Hamer quote has come up in the news again during this election season: it was used by civil-rights activist (4) (1). “I’m sick of symbolic things. We are fighting for our lives,” Hamer said. I’ve been thinking of Hamer and her story for months, turning it over, feeling that it is connected to this present moment but not being fully able to say why. And there it was, in an endorsement, in a way I am not entirely sure I am comfortable with.

> “I’m sick of symbolic things. We are fighting for our lives,” Hamer said.

What does it mean that black women’s political liberation and work is used to further democracy, when it isn’t necessarily extended to us?

“It’s a funny thing,” Hamer said, “that if you don’t speak out ain’t nobody going to speak out for you.”

I remember watching the Democratic National Convention this year. On Twitter, everyone was saying the DNC owed its life to black women. There was Mayor Stephanie Rawlings-Blake, secretary of the DNC, banging the gavel that started the proceedings. There was Donna Brazile, political crush of my teenage years, moving through the crowd as the interim chairperson. And then there was Michelle Obama, the paragon of black womanhood, on the stage, giving the rallying cry of this election season.

> But I watch how we, as black women, are consumed. Always symbols for other people — dreams or demons. And I wonder how we can simply be within ourselves.

I think maybe that’s why Hamer has been on my mind so much. In an oral history from 1972, she was asked, “Do you have faith that the system will ever work properly?” Hamer answered, “We have to make it work. Ain’t nothing going to be handed to you on a silver platter, nothing. That’s not just black people, that’s people in general, masses … So, you don’t ever get nothing, just walk up and say, ‘Here it is.’ You’ve got to fight. Every step of the way, you’ve got to fight.”

I think of the wilds of girlhood, where I had my doll proxies play-fight thrilling wars. I think of my life now, how tiring it is to continually feel as though you are in a fight. Hamer reminds me there is no other way. There isn’t any certainty in fighting, but there can be conviction, and there can be, in the midst of a battle, the opportunity to define yourself.

_Kaitlyn Greenidge is Lenny’s contributing writer and the author of_ (2).