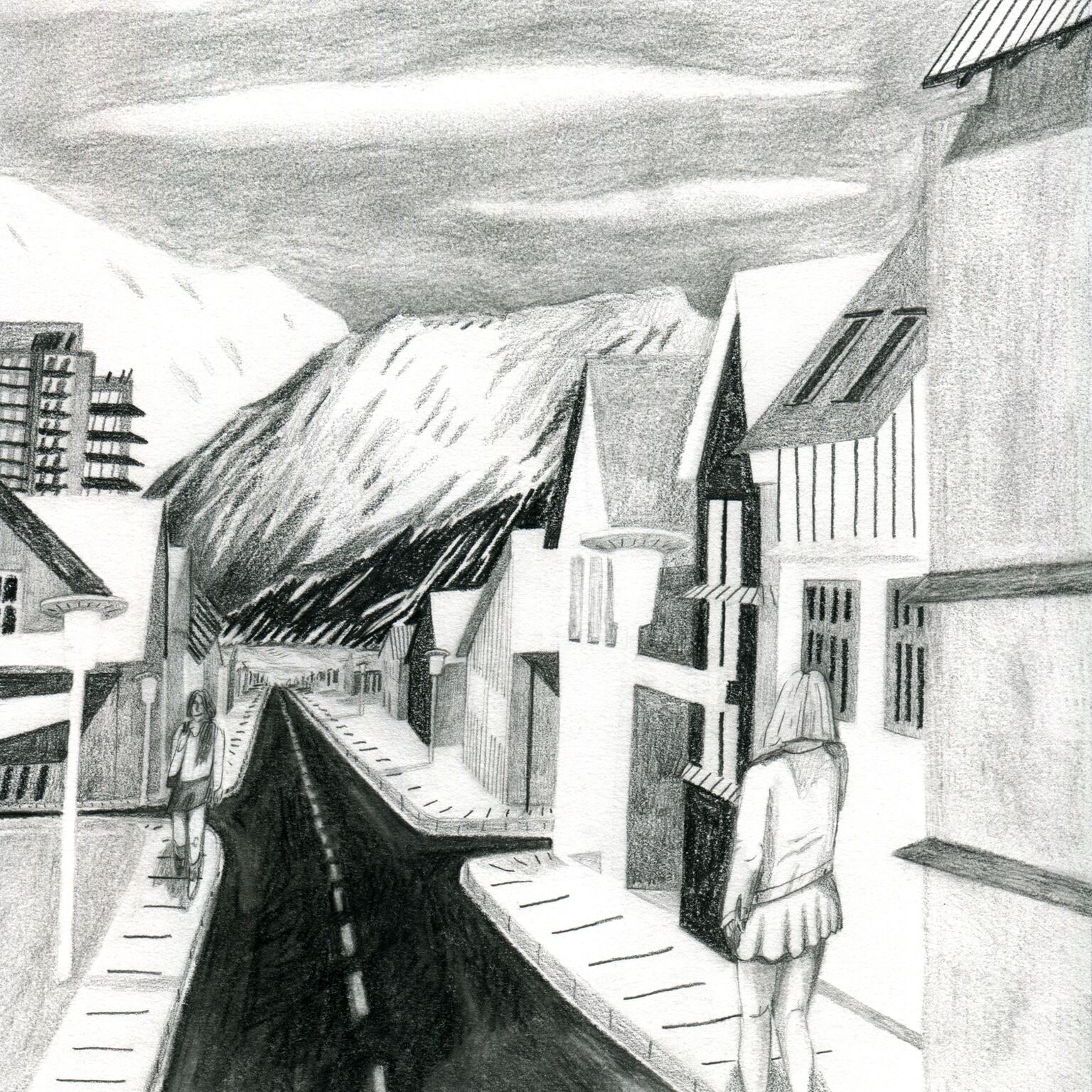 Her name was Birna Brjánsdóttir. Loved by family and friends, but otherwise unknown to the rest of Iceland. Until January 14, when suddenly the entire nation began to hope for her safety.

It wasn’t just the thriller-like criminal investigation that sparked our interest. It wasn’t solely that murders are exceedingly rare in Iceland, and that each and every case makes the national news. It was the fact that she was just a regular twenty-year-old girl. She had recently enrolled in philosophy at the University of Iceland, and she had been working shifts at a local department store.

When police released CCTV footage, desperately seeking witnesses, many of us thought: _This could have been me._ A whole generation of Icelandic women could picture themselves walking home on her wobbly feet, late at night after a long party, and, most significantly, alone.

We waited for a whole week after the investigation began, but it seemed like forever. The enormous popular interest spawned an immense number of tips on where she might be found, but to no avail. On the eighth day, they found her, washed ashore by the North Atlantic, stark naked.

Iceland, which is regularly awarded the title ” (1),” has an exceedingly low rate of violent crime. In 2003, 2006, and 2008, not a single homicide was committed here. Add to that the feeling of closeness in a nation of only 330,000 people. Reykjavik’s nightlife is a bit like _Cheers_, where everybody knows your name.

Icelanders also have an inherently insouciant approach to life in general. It runs on a scale from the profoundly stoic to devil-may-care heedlessness. Ask an Icelander how they plan to solve any impending problem and he’ll answer: “_þetta reddast!_”: it will all work out somehow.

Perhaps we all suffer from (2), the tendency to consistently (and sometimes deliberately) underestimate the risk of negative consequences. The “it won’t happen to me” syndrome. But Birna’s death punctured that illusion.

In the course of the week Birna was missing, the case developed into one of the biggest criminal investigations in recent times, and was certainly among the top ten media frenzies. Fingers glued to the refresh button, we learned that her boots had been found by Hafnarfjörður harbour, close to Reykjavik. Soon after, Icelandic special forces were on a helicopter chasing after a Greenlandic fishing vessel that had been docked in the harbour and whose sailors had rented a car that was allegedly seen on the aforementioned CCTV tape.

Her blood was found in the car, police have confirmed, and local broadcaster RUV has sources saying that her ID was found in a garbage bin onboard the ship. She was finally found washed ashore on the black sand of Iceland’s southern coast. Despite the strangle marks on her neck, the autopsy found that the cause of death was drowning. She was naked when she was found, but police have refrained from commenting on whether they found signs of sexual assault. One of the Greenlandic sailors is awaiting trial on the charge of murdering Birna.

With this single, horrific death, young Icelandic women, en masse, developed a fear for the stranger lurking in the dark corner on the lonely walk home. For years, I used to live just up the street from where Birna was last seen, and by god, did I stagger drunkenly home on the weekends. Though I’m not living in Iceland now and have swapped the partying for two small kids, Birna’s death made me, and many women I know, reconsider our heedlessness. Some of my Icelandic friends were suddenly swapping the tipsy walk for a taxi ride. They would check on each other and text to let each other know that they’d arrived home safely. Some even say that they avoided partying downtown.

> With this single, horrific death, young Icelandic women, en masse, developed a fear for the stranger lurking in the dark corner on the lonely walk home.

“I didn’t know her, but it felt so close. She’d been partying at Húrra, where I frequently go, had grabbed a snack at my favorite kebab joint on her way home, and then walked a street that I walk every week,” says Elín Inga Bragadóttir, 27, who works for Unicef in Reykjavik.

“I’ve never been afraid to walk on my own at nighttime,” Anna Margrét Káradóttir, 33, says. As a DJ, actress, and singer, she has lived and worked in central Reykjavik and enjoyed the city’s nightlife for years. The feeling of security has not even been limited to Reykjavik, she says. “It was the same when I lived in London. I guess I just never gave it that much thought. Until now. Suddenly I find myself opting for the unsufferably long taxi queue instead.”

Even so, many resist changing their behavior. My sister Hildur, 31, is one of them. Ever since she moved to Reykjavik ten years ago, she has deliberately refused to participate in the tricks we all know. No keys between the fingers. No predialing of emergency numbers. She intensely hates the victim-blaming that supposes that women are somehow responsible for getting attacked. “I would hate it if I, in the aftermath of an attack, started accusing myself for not having been more prepared, rather than putting the blame where it belongs. An attack will never be my fault anyway.”

And just like her, many young women are forcing themselves to keep calm and carry on walking home alone. The ease and freedom of movement are more valuable than the supposed preparedness.

Bragadóttir again: “I’m deliberately trying to relax, because the fear and anxiety doesn’t do anyone any good. A few days after the incident, I forced myself to take a shortcut late at night. Heart pounding, I chose a dark alleyway over a longer route with streetlights. Exposing yourself to the fear is a good way to gain control over it. But it was also an act of defiance. I was simply exercising my right to exist in this world.”

Are we deliberately suppressing our better judgment if we don’t alter our behavior in the aftermath of Birna’s death? No, not really, says social psychologist Dr. Ragna B. Garðarsdóttir, senior lecturer at the University of Iceland. “Many Icelandic women walk home alone precisely because the chances of an attack are very low. That’s not optimism bias, but good judgment. Reykjavik remains a very safe place for women.”

She’s right. What happened was a gruesome crime, but it was also a freak occurrence, which defies crime statistics in Iceland. Statistically, the women of Reykjavik are still most likely to get abused or killed by their partner, in the supposed safety of their homes. It is awful to think that we’ve never experienced the same intense collective grief over their deaths. And it is thought-provoking that society instills in us a fear of the unknown, when it’s the known that is most likely to hurt us.

But there’s no reason to feel that we’re overreacting either. What’s happening in our heads is completely natural, and it will pass. Dr. Garðarsdóttir draws in another mechanism, (3), which means that our actions are shaped by an event or information that is on the top of our minds. “Many women feel that it could have happened to them instead, so they believe that the risk is higher than it really is. They underestimate statistics on the real probability but overestimate the risk of being attacked because they feel that Birna is representative for them.” The effect is likely to fade as time goes by, as more recent impulses and information push this event from the top of our heads, Dr. Garðarsdóttir assures.

If not before, then certainly in the summer. For Iceland is blessed with 24-hour daylight from the end of May until the end of July. Already by the end of April, you’ll be blinded by daylight if you leave a club at 4:30 a.m. When I ask whether they think they will regain their feeling of security with more daylight, all of the women I talk to reply with an unequivocal yes. The endless daylight is a potent natural high, making us feel euphoric and invincible. It won’t make us forget Birna. But it will aid the healing process, so that when winter rolls in again, we can brave the subarctic storms in our skimpy skirts and just walk home if we feel like it.

_Herdís Sigurgrímsdóttir is an Icelandic writer. She covers anything from maternal health to sustainable urban planning, but, alas, most likely in a language you won’t understand._