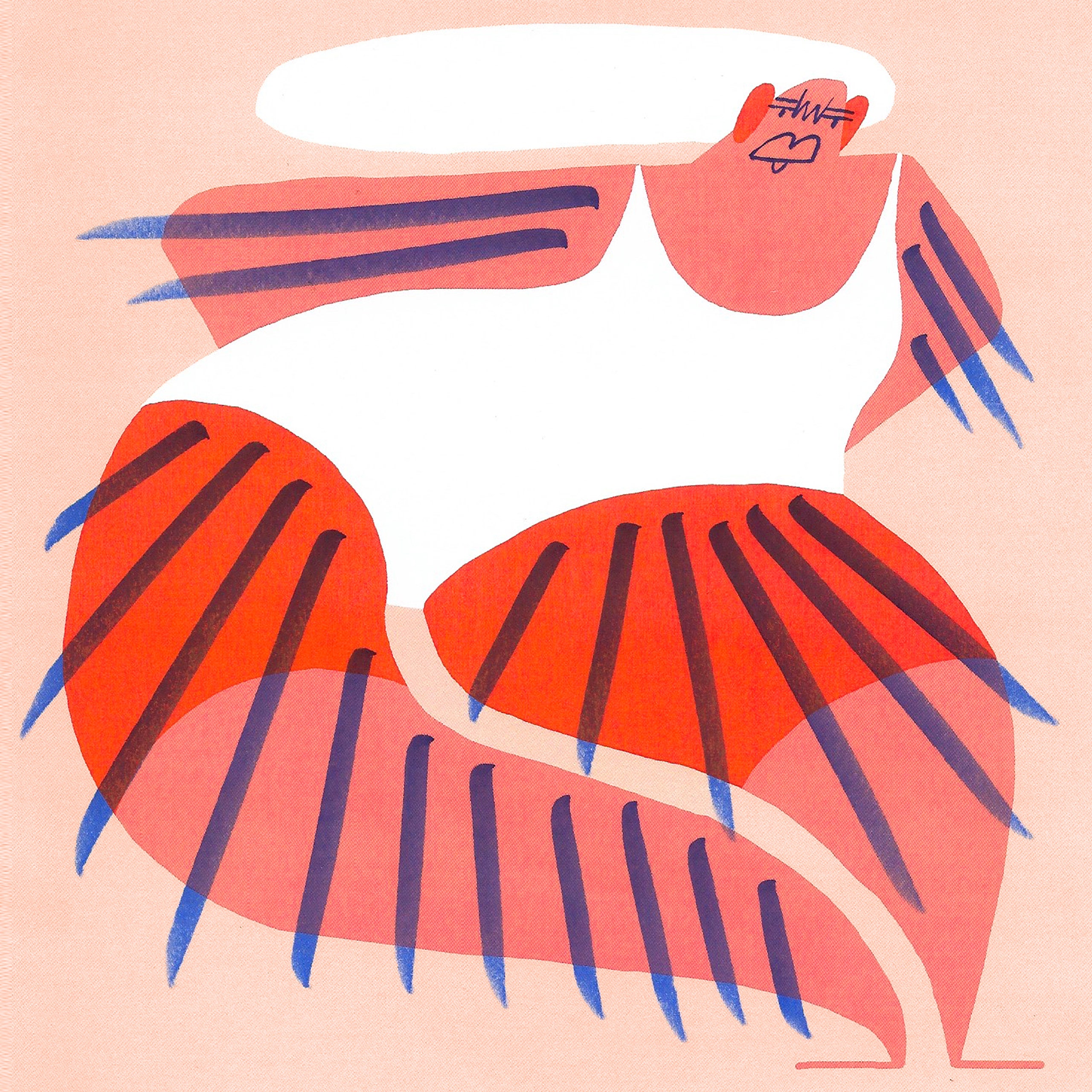 To a dancer, the floor is paramount: it is both a physical and a psychological partner. You learn to depend on it, to lean on it, to leap off it. One of my favorite pre-class rituals involved lying on my back in the studio, bundled in thick sweatpants and a hoodie, feeling my bones make contact with the wood, those solid, orderly slats. It felt like meeting an old lover. Like coming home. When all else failed — I mangled the steps, I felt clumsy or lost — the floor was always there.

At 26, I’d been a downtown modern dancer in New York City for almost five years. It was a life I’d cobbled together in the rinky-dink fashion we thrived on in those days: with a farcically cheap rent-stabilized apartment in Brooklyn, a flexible job slinging coffee, and good yoga-teaching gigs all over town. I had, in some ways, *arrived*, although I didn’t believe there was a fixed destination, and if there was, I was sure I hadn’t gotten there. There was always more, more, more — it was a career that required saying yes to everything.

The day-to-day of it was so far from glamorous that some wouldn’t dare even call it a career, but as it turned out, it was my kind of life, one built on and through my body, a body I had, since childhood, found immeasurable joy in using to its fullest.

One evening in dance class, I kicked out my leg and felt a sharp pain in my lower back. I hobbled to a corner of the studio and got down on my hands and knees to assess. I didn’t know it then — wouldn’t believe it for years — but the floor, my home base, had been pulled out from under me.

Six years later, I found myself in a hovel in Paris. An old French woman named Noëlle had her fingertips on my spine and was screaming “Up! Up! UP!” in my ear.

By then I was 31, and I had lived with chronic pain since that day in class. For years, I kept dancing. Cooks work with burns, medical residents with sleep deprivation, dancers with pain: this was my logic. Eventually the ache in my back and hip crept down my leg, causing debilitating nerve pain — sciatica — that stayed there, no matter what I did. My career fell apart. With it, any sense of my identity toppled.

Restorative yoga, acupuncture, massages, physical therapy, an anti-inflammatory diet, Chinese herbs, cortisone injections, fistfuls of Aleve, narcotics, disk surgery. When none of those provided any relief, I got on a plane to France.

My friends and family thought I had gone insane. Perhaps I was, finally, unhinged, but this is what pain does to you — it stalks you, insinuating itself into every facet of your life, growing in volume, until there’s nothing else left.

Although Noëlle had been B.K.S. Iyengar’s first Western-yoga student, she was entirely unknown in the yoga circles in which I’d traveled (or, really, in any yoga circles). She’d even appeared in Iyengar’s biblical tome *Light on Yoga*, which features photos and detailed explanations of every single posture in the alignment-based practice. Noëlle was in the only photo Iyengar shares with another person — in a striped bikini, sitting on the floor, with her legs extended in front of her. Her face is being crushed into her thighs, because Iyengar is balancing in a quasi-handstand on her back, his hands scooping around her ribcage. They look like some sort of Chinese circus act.

“*She’s* going to fix me?” I asked my friend Alison, who’d opened the book on my lap. She’d been similarly debilitated, and had been miraculously healed by this bikini-clad yogini.

I had no one left to trust, so I went.

This is all I knew: Noëlle taught Aplomb, an offshoot of Iyengar yoga that did away with actual asana and focused on the minutiae of posture. The gist of it was: by relearning to stand, my sciatic pain would disappear.

Noëlle had spent decades studying people who did physical labor — stevedores, fisherman, farmers — without pain well into old age, and she had made a simple discovery: we all have a natural alignment that should allow us to live with ease and mobility until the very end of our lives.

The secret to this pain-free posture? The pelvis had to be tilted forward, or, in yoga parlance, *un-tucked*. In regular-people lingo: the butt had to stick out. From this base, the spine could elongate up naturally. Any pain caused by a herniated disk would be alleviated with this freed-up space between the vertebrae.

Given Noëlle’s age and history, I expected clarity and wisdom — a transcendental experience, perhaps — but her directions were incomprehensible, and the posture was impossible to “get.” The minute I walked into her apartment, I had to toss out any knowledge I’d come through the door with. *Tuck!* I’d been told in every single yoga and dance class I’d ever taken. *It protects your back! Squeeze your butt! Suck in your stomach!*

“*Non! Non!*” Noëlle yelled, gesturing angrily at my pelvis. “What is this? Who taught you this?”

Should I take her seriously? I couldn’t tell. This was not the mala-bead-laden, aging Catherine Deneuve of my dreams. She was a haggard old woman who lived in a smelly hovel — her threadbare clothing was stained, her hair unwashed. Most alarming, she had no bottom teeth.

But her posture was the most perfect, easeful thing I’d ever seen: regal and relaxed. If that’s what would get me out of pain, I wanted it, desperately.

Day after day, I’d show up in her minuscule *Grey Gardens*–esque apartment, nerve pain ringing down my leg, and do … *nothing*. Stand. Sit. Stand again. Try, over and over, to relax ever more in my body, to fall into some sense of mysterious “aplomb.”

Mostly, I failed. Mostly, she sighed or yelled with exasperation. Mostly, I’d wonder which of us was crazier. She’d put her ancient hands on either side of my spine and guide me — but the guidance was so subtle it was like trying to change your life with the tip of a feather.

*You’re working too hard!* Noëlle would admonish. *Do less!*

I’d long understood this directive to mean *Take to your bed with an ice pack and two Aleve*. I’d spent much of the past few years there. But during a workshop one weekend, when I was so despairing that I tried to slip out of class to do exactly that, Noëlle cornered me in her indomitable way. *What will you do in your bed? You have to go on living!*

Obediently, I began to allow myself the joys of wandering in and out of boutiques, of riding the long escalator up to the Pompidou, of sipping café crème in the Marais.

And after months of daily practice, something started to happen. I began to sense small improvements. Under Noëlle’s tutelage, my spine slowly cooperated, the disks buoyant, freed from years of compression. My chest, resting weightlessly atop my rib cage, opened. It was slow, frustrating, often imperceptible, but the shift was seismic. I was granted hours — then days — free of pain.

Noëlle put into question not only all I knew about anatomy but also all I knew about the nature and trajectory of progress itself. I’d spent years seeking help from experts, and my body had shunned them all. But now something profound was happening within me: I was learning to stand on my own. I was learning that my body could change after all, and not because of some surgeon’s skills. I could learn to *be in it* differently.

When I was dancing and teaching yoga, I was in the business of understanding bodies. When I got hurt and couldn’t figure out a way to make the pain go away, I just wanted someone to fix me with a scalpel, a needle, a pair of hands — anything to get it back to “normal,” to the way it was, as if that were a static place.

The most shocking part of the injury wasn’t the pain itself, nor was it the fact that I no longer had control over a body I had spent two decades learning to master. It was that I no longer *knew* or understood that body — what would piss her off or quiet her down — and thus didn’t know myself. The center would no longer hold.

But Noëlle, in her utterly unorthodox fashion, pushed me to meet this new body, this new person, and eventually to accept her, simply by teaching me to stand well, as I was, on my own two feet. I didn’t dance again, and the pain does come back here and there, but it doesn’t torture me on a daily basis. It no longer defines me.

I won’t ever be who I once was: agile and unafraid and physically bold. But isn’t that the story of aging? There is no place to return to. There is only now, and now, and now.

*Abigail Rasminsky has written for the* New York Times, *the Cut, the* Washington Post, Marie Claire, *and* O: The Oprah Magazine, *among other publications. She lives in Los Angeles.*