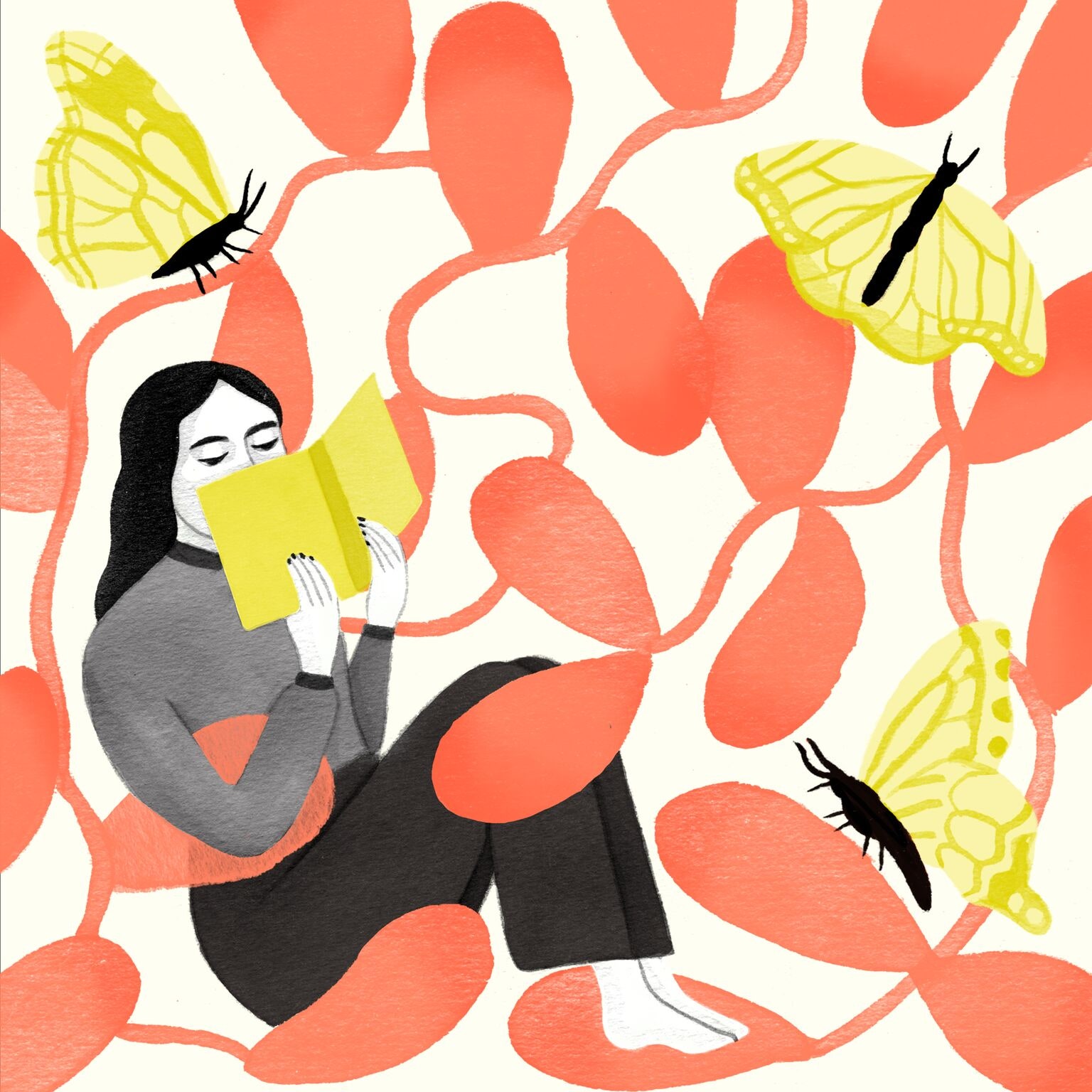 Everything was going to be perfect, just as soon as I became a Butterfly.

What kind of hallucinogenic do you have to be on to want to be an insect or shrubbery?

None. Unless you consider reading an altered state. I was fifteen when I cracked the spine of _Slapstick,_ the novel by Kurt Vonnegut, and I experienced that kind of “everything makes sense now” ding that went off in Don Draper’s head when he cooked up the Coke commercial in the final episode of _Mad Men._ Vonnegut spins your typical dystopian future, except that something wonderful has come from the slew of catastrophes that has befallen society. The world’s citizenry has reorganized into clans: Butterflies, Orioles, Chickadees, and assorted botanically inspired fraternities.

Each of us instantly linked to hundreds of thousands of cousins spanning the globe. Hence the subtitle of the book, _Lonesome No More._ We’d all become one big happy family. Well, more like lots of big happy families. Or lots of unhappy ones: the Hollyhocks, Chickadees, Orioles, and Butterflies, each unhappy in their own way. This sounded even better than caffeine and wedge heels, both of which I’d also just discovered and still pledge unwavering allegiance to.

Mrs. Brownstein, my fifth-grade teacher, was a fresh-out-of-college hire at River Road Elementary School in Wilmington, Delaware. If you were an outstanding student in Mrs. Brownstein’s class, you’d get the privilege of receiving a dinner invitation to her home. My mother, who has diligently saved the writing assignments from my childhood, sent me a report I wrote in Mrs. Brownstein’s class. It was on how I wanted to be a teacher and be pretty, kind, and have good penmanship just like her. I got an A, but Mrs. Brownstein added, in her excellent script, _Okay, Anne, you don’t have to try so hard!_

Lady, you have no idea.

I was included in the first group of students chosen to come to dinner. She and her husband, also an elementary-school teacher, served meatloaf and an iceberg-lettuce salad. The Brownsteins were sweet but a bit on the boring side. They were _exactly_ the kind of people I wanted to bunk in with. They seemed so orderly, so stable, so … unlike my family.

We’d landed in Delaware a few years earlier, without enough money for winter coats. After my father’s latest get-rich scheme had belly-flopped, we’d lost our house and all but skipped town in the middle of the night. Camping out at my mother’s sister’s home, my father tried to find work, while my mother took to her bed and my grandmother slipped our aunt money for luxuries like food, shoes, and shampoo.

The only thing is, in my memory, Mrs. Brownstein looks a bit too much like Carrie Brownstein, and her husband too closely resembles the comedic actor David Krumholtz. I remember us as seated around a circular white plastic table on white plastic modular chairs, but that’s also a description of the dining room set in my Barbie Malibu Dreamhouse. Memory can be a trickster. What I am certain of is that I wanted them to adopt me.

This plan was thwarted because halfway through fifth grade, my dad announced we were moving to Florida, where I found plenty of enviable families, parents with recognizable jobs, steady incomes, and homes that felt like secure harbors. Even though we had a tony address on a private island, there was always a sense that the bottom might drop out again. On any shopping excursion, I’d hold my breath while my mother handed her credit card over. Every purchase required a phone call to confirm the charge. Many times it would be turned down, and I’d hope no classmates were nearby to witness.

> The temporary abolition of ordinary life provided a tonic to the unpredictability of my family life.

I didn’t find another family to rescue me, but it was in Miami that I joined the tribe that’s like a homing beacon for teenage malaise — the high-school drama club.

Those long hours of rehearsing _Bye Bye Birdie,_ _Our Town,_ and scenes from _The Rocky Horror Picture Show,_ and even longer hours of pretending to rehearse but screwing off together, fostered a kind of intimacy, though I wouldn’t have used that word at that time, which was appealing, having been indoctrinated into keeping family secrets.

A play has well-defined rules: dialogue and blocking that are repeated each time the play is staged. Relationships, no matter how volatile, resolve with reliability. The emotional timbre might vary from performance to performance, but Brutus is always the betrayer in _The Tragedy of Julius Caesar_. If an actor blurts out, “Et tu, _Mark Antony_?,” that’s a production that’s gone off the rails. The temporary abolition of ordinary life provided a tonic to the unpredictability of my family life. Every time I’d do a play, it was like being rescued from a sinking ship and put into a lifeboat.

Not surprisingly, I followed my high-school boyfriend Danny, president of our club, into the drama department at NYU. When my parents called to let me know they were broke and there was no money for my education, his family agreed to let me take up residence in the living room of the condo they’d bought for him while I tried to make a go of an acting career, even though he and I’d broken up by then. He and his family were beyond kind, but I also suspect that they didn’t think they had a choice. I clung to them for support, and like a mold infestation, it was really hard to get rid of me. When, by an amazing stroke of luck, I began earning a living as an actress, I moved out and into a studio apartment in the building next door to his place.

That I’ve formed a family, relished motherhood, and get out of bed each day to try to be useful still astonishes me. A string of days rarely goes by when I don’t picture myself pushing all of my belongings down the street in a shopping cart. I am stunned and awed by people’s ability to function in the world. How does everyone do it? How do they manage to make their lives work? How secure are their family’s finances? What kind of secrets are they keeping? I’ll look at a home and wonder what _their_ story is and whether they’ll ever have to get out of Dodge in the middle of the night.

I’ve been thinking about Vonnegut lately and his impact on me and other readers. I’m not exactly pining to read him again, but I recently learned that he studied anthropology in college and was deeply fascinated by the rootlessness that marks modern life, which makes sense and mitigates some of the more wacky plotlines of his novels. His writing sparked the idea that I might one day find _my people_. I would never put myself in the same sentence as him, except to write that I share that interest. Reading and writing about the mistakes and missteps in an attempt to connect with other humans isn’t a cure-all, but it does lessen the shame of holding secrets, and that’s transformative, perhaps offering us all the potential to become butterflies after all.

_Annabelle Gurwitch is a_ New York Times _Bestselling author who writes about finding your tribe in her new collection of essays_ (1), _out today._