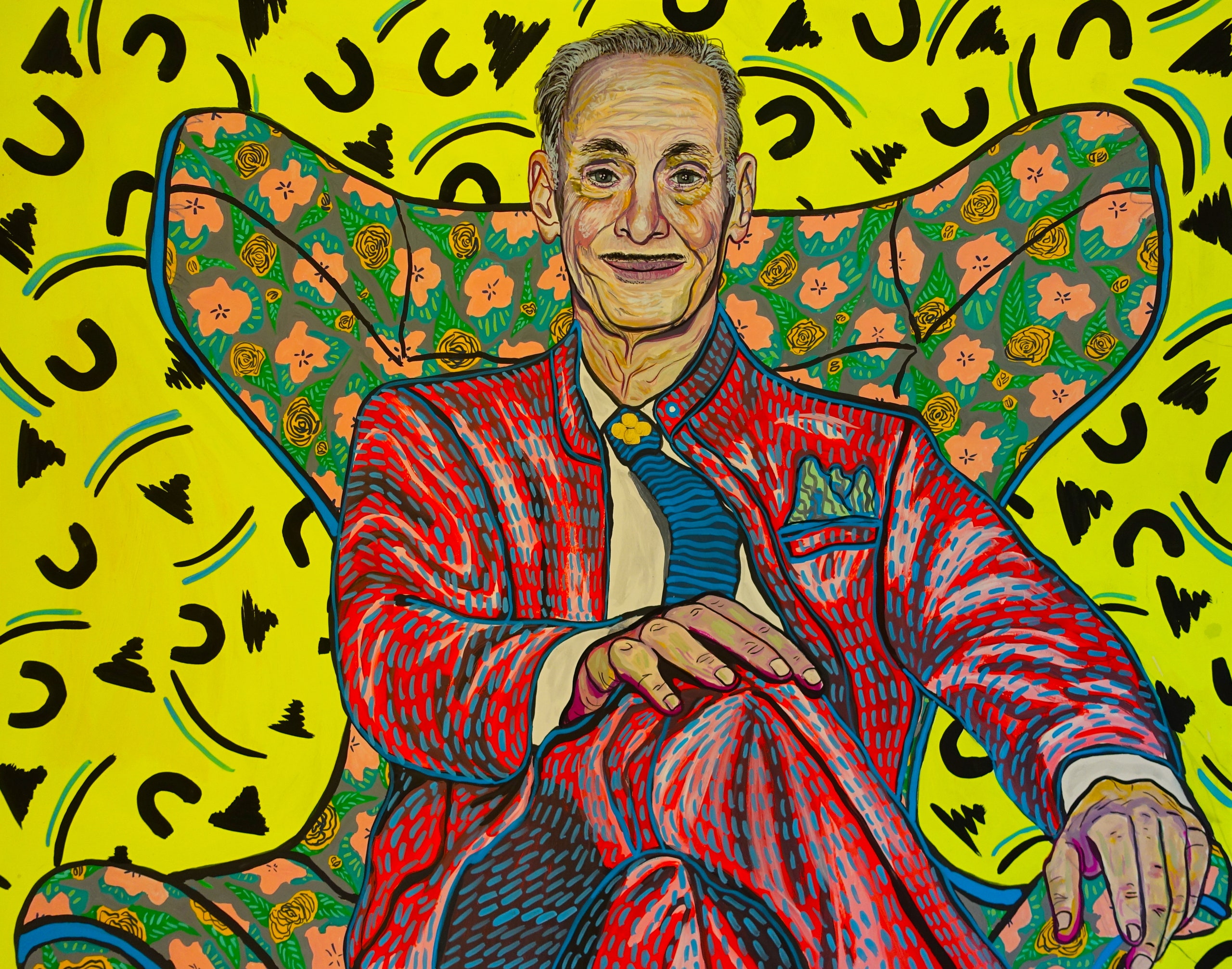 John Waters has, defying most people’s expectations, become one of those artists who are beloved by nearly everyone. Like RuPaul, Dolly Parton, and Run DMC, Waters has somehow morphed from his first iteration of cultural outsider and provocateur to beloved national treasure. For years, *Pink Flamingos* was the movie kids dared each other to watch — full of people fucking in the same room with chickens and the drag queen and Waters’s muse, Divine, resplendent, eating shit.

But by the time I was in third grade, *Hairspray* had become a staple of grade-school-girl sleepovers. John Waters’s fans are legion. My former boss and her 70-year-old black nationalist father; the kind of racist white girls I grew up with in the suburbs of Boston; Terry Gross and the film snobs I used to reluctantly run with in college — all of those people love and respect his work, even if they don’t always agree with all of his tossed-off bon mots.

Two years ago, Waters was invited to give (1). (2), with its practical, irreverent advice to wannabe artists quickly went viral: I posted it everywhere and regularly returned to it even after it slipped down my feeds. Particularly helpful was this joke: “A career in the arts is like a hitchhiking trip. All you need is one person to say ‘Get in,’ and off you go. And then the confidence begins.”

Luckily, the speech has been illustrated and made into a book, *Make Trouble*, out just in time for 2017 graduates who are about to enter probably the most challenging postcollegiate year in recent memory. I talked to John Waters the day of the big snowstorm that wasn’t, in New York City, so nervous to finally speak to an idol that I couldn’t really get my questions out.

__Kaitlyn Greenidge:__ Thanks for doing this interview! Lenny is so happy to have you—

__KG:__ We try to showcase women mostly, but we made an exception for you because we love you so much.

__JW:__ Oh, good. You know, there used to be the scariest lesbian bar in the entire world in Baltimore named Port in the Storm, and I was the only man they’d let in for a while. It was really good. I took Debbie Harry there one time — this is 30 years ago, when we made *Hairspray*, around then. I took Debbie Harry there; she said it was the scariest bar she had ever been in in her life.

__KG:__ Well, this is almost like that, but through a very tame iPhone interface. So I am really excited to talk to you about the new book, *Make Trouble*. I loved the speech when I read it after you delivered it. I was a huge admirer of your advice to work to be a cultural insider, but I’m wondering if your advice has changed given kind of the hard right turn that we have experienced in our culture in the last three months or so.

__JW:__ Well, now you should be like Valerie Solanas when she told women to get jobs and unwork until you get caught, and then get another job and unwork, which means you go and you act normal but you fuck up every single thing you can while you work there. This is a good time in the Trump White House to get somebody in there to unwork.

Go in and purposely do stuff and then have somebody else get your job so that you’re a complete spy. I always wished I was in, what’s it called? Destroy 70? Whatever that underground group was that was gonna throw stuff on the arriving guests at the inauguration, but then Breitbart had a radical group too that infiltrated their group, so it is like *Spy vs. Spy*. So, all these kind of underground radical groups infiltrating others. I have nostalgia for it.

__KG:__ Well, that’s what’s so interesting about, or kind of troubling about, this back-and-forth, is that the far right gets to put themselves as radical, but all of their ideas are just so retrograde.

__JW:__ Well, I don’t know. I knew Breitbart, ’cause when I did *Bill Maher* with him, Breitbart said to me, “Look, I’m just like you. It’s just I’m on a different side.” He said, “I learned all my tactics from Abbie Hoffman.”

They are doing the same thing that we do. They are yuppies on the other side. So that’s where I thought it was kind of funny, when both radical groups had infiltrated the other . To me it is kind of humorous in a way, but at the same time when I saw those demonstrations in Berkeley I was just fascinated by all the cute boys that had ski masks on. Not only did they have poles, they had shields, and that’s the new thing. Shields made out of duct tape and cardboard to knock away tear gas and rocks. I want one, and I don’t have one. I’m hoping some radical young guy makes me a shield, because I think that’s gonna be the new fashion accessory.

__JW:__ I’m rooting for shields now. I think we all need to carry one, ’cause they were gonna throw acid on the arriving guests. I thought they meant LSD, like Grace Slick was gonna do at Tricia Nixon’s tea party at the White House. I think they meant real acid, which I thought was — even for me — a little extreme, until I saw Pelican 212, a rock group that Trump picked for his inauguration ball. Did you see them? No one but me seems to have seen them.

__JW:__ Never has there been a more hideously untalented, amateur group, and they were singing covers of James Brown songs. I couldn’t talk for two days. I went to the marches and everybody had great signs, but I found I just wanted to have one that said “I Hate Pelican 212,” but then no one will know what I’m talking about. You see, musical taste, it is grounds for impeachment.

__KG:__ What I loved about your speech is the reiteration that art is here to challenge us and scare us a little bit. I’m wondering what happens to art, and how do you keep making art when the challenges in our culture keep shifting, and especially in this moment where so much of our political landscape feels completely terrifying and also like a complete parody that you can’t believe anymore.

__JW:__ It’s hard to parody a parody. You know, I do a spoken-word show all the time, and I did two of those, and I got another two next week, but you constantly have to rewrite because every day Trump is great for the news business, because something happens every day. Everybody thinks, *Oh, one day he’s gonna finally go too far and get thrown out*. Well I hope that, too, except I don’t, really, because I really, really believe Pence is much, much worse. I think Pence looks and acts normal, and he’s the Devil. The scariest thing that Trump did was when he acted normal one time, he made that one speech. You forgot that everything he was saying was horrible but because he wasn’t being a crazy person, you thought that it was normal, and he was saying terrible stuff.

__KG:__ I also just really love the line in the book that “You must participate in the artistic world you want to be a part of.”

__JW:__ Well, if you’re a writer, you should just be reading all the time. It’s plain and simple. I mean, it’s like the stupidest thing in the world. If you’re writing a book and you haven’t read anything really current that’s good … I mean, if someone says to you, “What are you reading?,” and you don’t have an answer and you want to be a writer, you won’t be one. Give it up now, because you have to participate.

If you’re an artist and you want anyone to see it, you have to find someone to show it. Someone else has to like it besides you, and you have to find out where those people are. That’s why I say in the book you can’t hate all rich people. Who’s gonna buy your art? Who’s gonna back your movie?

> If you want to change anybody’s mind, you got to get them to laugh
> first.

__KG:__ How does the desire for approval harm artists when they try to make art? Or does it harm you?

As I said, somebody has to like it … For a movie, a lot of people have to like it. A play, less, but still someone has to like it besides you and your mother. Well, my mother never liked *Pink Flamingos*. I mean, she pretended to, but how could you? What mother could be happy their son made *Pink Flamingos*, really? People say, how was Divine’s mother? What mother would be happy their son was in drag eating dog shit? Not that many parents. I don’t even know what I would say. They’re trying to raise money for this statue in Baltimore of Divine eating dog shit and I think I’m against it, almost. I think Divine would want to be remembered for not just that. It was a terrorist act against the tyranny of good taste.

It was a political act. It’s hard to imagine that now. These days if someone ate shit in front of Trump it might be good.

__JW:__ No, I don’t think it exists, actually. I was raised in it, but I’m glad I was, ’cause I knew the rules to break them. If you’re ever gonna break rules, you have to know the rules well enough to make fun of them.

__KG:__ Have you noticed a change in people’s responses, postelection?

__JW:__ No, I haven’t, and I’ve done my stuff, and no one gets mad at anything I say anymore … No one gets mad, and they bring their children to see me, which I find so bizarre. I wouldn’t want to sit next to my mother and listen to my show.

In a way, this is a good book. *Make Trouble* is a good book, if you have a little child, to give kind of as a peace offering, almost. I mean, it’s one to even give somebody that got thrown out of school, I think, that didn’t graduate. I think it’s all about that. It’s about graduation, the great pressure of school, and then with the parents how expensive it is and everything. I speak to parents, too, about the kids — they expect you to understand everything instantly. They’re supposed to accept you’ve had a sex change and you’ve had horn implants and they haven’t even seen you for months, so they are a little surprised. You have to give them a little bit of leeway every once in a while.

No one ever seems to get mad anymore. Which I’m happy about. I never wanted to make people mad.

__JW:__ I wanted to make people surprised and maybe nervous, but never mad.

__JW:__ Then they’ll listen and they’ll laugh. If you want to change anybody’s mind, you got to get them to laugh first. Even if it’s someone that you so don’t agree with. I’m against separatism. I think refusing to ever talk or hang around with somebody whose politics you don’t believe in is a losing battle because nothing’s gonna change.

*Kaitlyn Greenidge is a contributing writer for Lenny Letter and the author of* We Love You, Charlie Freeman.