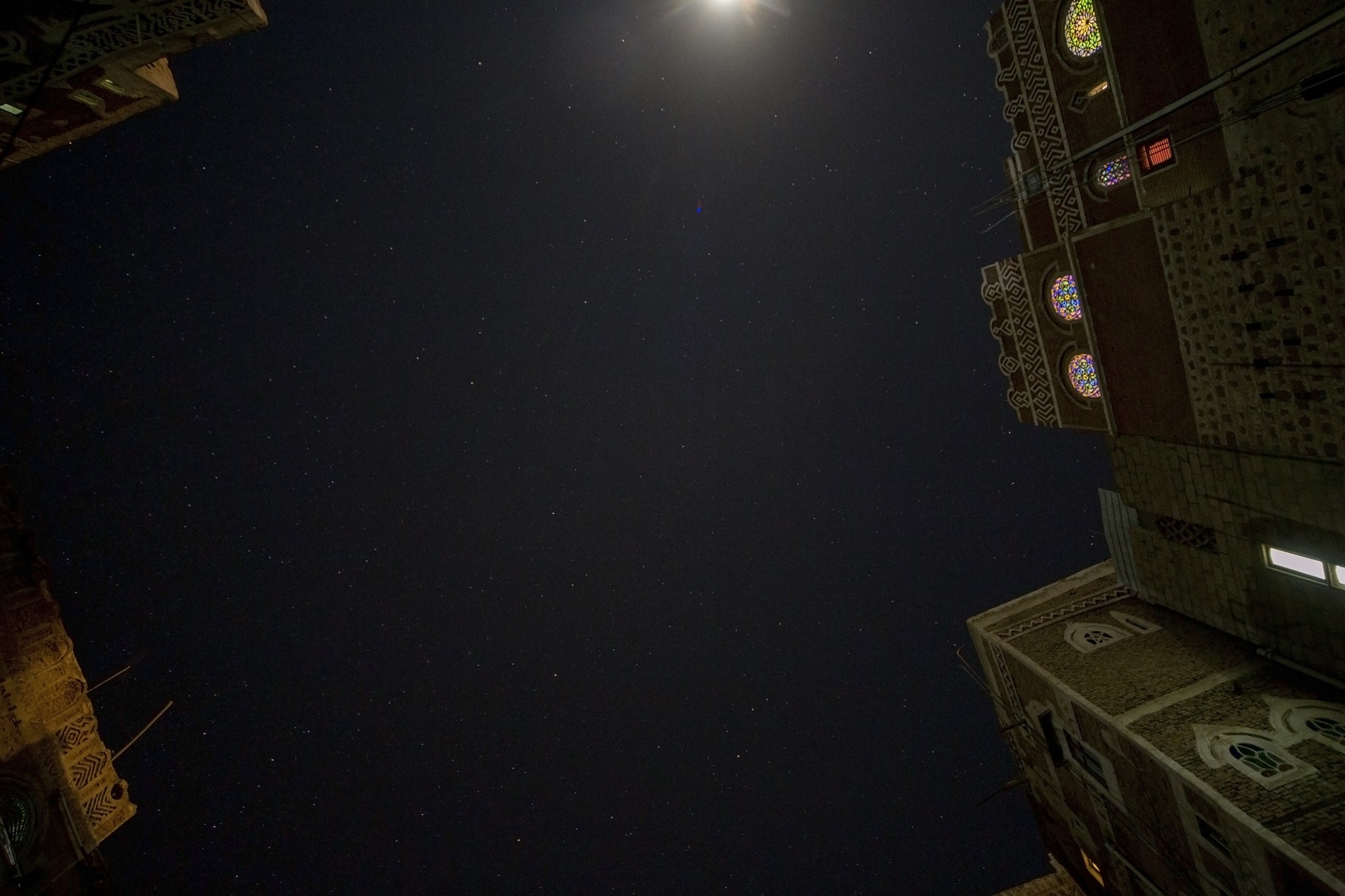 In 2004, journalist and filmmaker Laura Poitras traveled to Iraq to document the lives of the country’s citizens under U.S. occupation. Poitras focused on Dr. Riyadh al-Adhadh, a Sunni politician. The resulting documentary, *My Country, My Country*, was the first in a trilogy of films — including *Citizenfour*, the Oscar-winning documentary about NSA whistle-blower Edward Snowden — Poitras has made about the ramifications of the American surveillance state after 9/11. In November of 2004, Poitras filmed eight minutes and 16 seconds of footage from a roof in Baghdad following the raid of a mosque.

The last room of Poitras’s exhibition at the Whitney Museum of Art, ” (4),” which closes May 1, features her voice on a loop narrating her now-12-year ordeal with the Department of Homeland Security. “These eight minutes changed my life, but I didn’t know it at the time. After returning to the United States, I was placed on a government watch list and detained and searched every time I crossed the U.S. border.” The footage from the documentary plays alongside. (“Astro Noise” refers to the name of the encrypted file Snowden sent to Poitras in 2011.) She moved to Berlin for several years as a result of being on that watch list, and has only recently moved back to the U.S. Looking at the installations in “Astro Noise” meant facing the intricate design of war. There were reproductions of classified drone-strike orders that stood under dimmed lights as if they were ancient artifacts, not contemporary communications.

In addition to running a film studio, Praxis Films, Poitras is also one of the founding editors, with Glenn Greenwald, of (5), a website dedicated “to publishing fearless, adversarial journalism.” This March, Poitras co-launched Field of Vision, a digital lab for alternative filmmaking. “We just premiered a short called *Concerned Student* 1950 at the True/False festival,” says Poitras. “It’s about the students organizing at Mizzou. With this project , we’re commissioning other people to make films. Students who were at the university who have the access. It’s an example of how to build trust where press is normally shut out.” *Concerned Student* 1950 can be viewed (6).

I met with Poitras in her New York studio to talk about “Astro Noise,” the art of surveillance, and the global and domestic repercussions of the war on terror.

__Doreen St. Félix:__ You’re first and foremost a filmmaker, a documentarian. Have you found that there are certain truths you’ve been able to convey with this new exhibition that you hadn’t been able to via film?

__Laura Poitras:__ I think that working in the museum context allows me to do different things from long-form filmmaking. For instance, the first piece you see, is video of people gathering at Ground Zero, and then on the other side you see grainy footage of interrogations from Afghanistan. That is about 15 minutes long. In a feature-length film, a 15-minute view is pretty hard to do.

It creates this certain kind of limitation in terms of how you can really fully express things. Working within this context, where I let the viewer decide how much time they want to spend watching.

__DSF:__ “Astro Noise” is an immersive experience, confrontational. Have you watched viewers negotiating their role in the space?

__LP:__ Not that much, actually. The first days I tried to stay out because I didn’t want to be disruptive. I actually want to go back now and spend some time there, because, in a way, the work isn’t finished until it’s viewed, and until people relate to it. I feel that that’s the same with cinema that you show in a theater. But usually, with cinema, you get to sit in the room and see how it plays.

You feel how it is when there are bodies in the room. One of the things I’m really happy about is that people are stopping and spending time. They’re taking it slowly. I think that’s one of the things I wanted to get through this work.

__DSF:__ To the extent that the viewer is integral to the completion of the piece, did you have a particular kind of viewer in mind? What does it mean for an American, maybe even a New Yorker, to look at classified documents detailing military operations, as opposed to someone from a different country? Maybe even somebody from one of those countries under siege by America’s war on terror?

__LP:__ I feel that because I’m making work about America and the repercussions of American policy, that this is an audience I want to speak to directly. I want to speak to them about things that people are not thinking about as much as I think we should. Things like the occupation of Iraq, and Guantánamo, torture, drone wars. These are things that are being done in our names.

I am interested in how to humanize the war on terror for everyone, so that we understand it. So that, hopefully, you could just imagine what it would be like if your town was occupied, or if there were drones flying overhead and killing people. I think that if you could imagine another country was flying drones over Texas and killing people, people would be angry. They would be upset. Somehow there is this hierarchy of viewing other people’s lives in the world. That’s pretty tragic. Trying to shift those hierarchies is how to make it more level. That human life, loss of human life is tragic. It is life.

The repercussions of the war on terror have been horrible for lots of places in the world. We can look at Iraq for instance. The country has been destroyed from the ground up. So many people have died. The intellectual class has been killed. You have a power vacuum, which you now see ISIS stepping into. This is a country that’s going to take generations to rebuild. Most Americans don’t have a clue of the repercussions.

__DSF:__ The immersion “Astro Noise” invites is limited, though. For instance, the installation “Bed Down Location” features video projections of Yemeni and Somali skies studded with drone strikes. Viewers can lie down on a carpeted platform and look up. The immersion only extends to this specific art, American-centric context.

__LP:__ Right. The idea was to ask people to imagine that. To ask people to imagine what it’s like to be in places where we’re flying drones and killing people. Most people who will enter the museum are not going to be the targets of these strikes. There are other works that do try to address that. We’ve worked with several organizations that do a lot of work with drone victims. One being (7), which is a UK organization that represents victims and brings legal cases. We worked with them and the families to get footage.

A museum space is a place of privilege by definition, right? There is always a risk of making something that can only reach a certain audience. It’s potentially a risk. I’ve tried to make the work reach people, not a certain class of people.

__LP:__ That’s a question of, how do you represent the surveillance, because it’s by definition hard to see. There are a lot of people who’ve done incredible (8) around that, Trevor Paglen, whose work I greatly admire. It’s not like the surveillance state grew overnight. You just have to look back at the FBI files of Martin Luther King Jr., for instance. The surveillance state has been around for a long time, and it’s oftentimes linked to systems of power and control.

The risk that Snowden took to reveal information made people who were maybe not thinking about these things before think about them. If you are an activist or somebody who is dissenting in some way, then you’re aware the state might be interested in monitoring you. If you’re not in that category, then you’re not thinking about it. If you look at a country like East Germany, with pervasive surveillance, people understand it’s a dark thing. It’s dangerous, and it’s corrosive, disruptive to many different activities, human relationships, creativity, social dissent. The debate that’s going ] (1) shows you have, now, whole industries weighing in, talking about the need for privacy, and creating limits around what law enforcement can and can’t do.

How to represent surveillance in an art context … I’m not sure. I guess I always think of art as something driven by what an artist wants to express about the world. If surveillance is something that is urgent for an artist to talk about, then it’s relevant. I don’t think artists sit and look at a list of potential themes and say, “Oh, I’ll choose this one.”

For me, surveillance is a piece of puzzle of looking at post-9/11 America. We can do a lot of occupying of countries like Afghanistan or Iraq. If you look inside the United States, you see surveillance — not just electronic surveillance, but informants — the FBI going into Muslim-American communities.

__DSF:__ Like the NYU Muslim students who have been (2) by the NYPD. Before you go, I want to return to MLK. The (3) sent him correspondence basically encouraging him to kill himself while he was under their watch. As much as new surveillance theory is couched in the post-9/11 narrative, documents show that a lot of the programs in use were actually perfected years ago on black and brown activists.

__DSF:__ You wound up becoming the subject of your own work when the government began surveilling you in 2006. Does it feel like you’re being watched? Are you paranoid?

__LP:__ I get asked that a lot, about being *paranoid*. I want to clarify, because I actually have been watched. Usually paranoid refers to the fear of being watched. I don’t live my life worried about . It actually validates more than makes me more paranoid. It’s like, “Oh, I was right to, for instance, go to Berlin to edit. It wouldn’t have been a good idea to stay here, given the level of investigation that was going on.”

I’m really careful. If a source reaches out to me, then I’ll get paranoid and will become protective of that communication. I feel that the obligation I have as a journalist to protect the source is important. Knowing that I myself am targeted means there are more risks for anyone who contacts me. For my day-to-day life? I figure if they want to watch … they’re just wasting their time.

*This interview has been condensed and edited.
Doreen St. Félix is a writer for MTV News.*