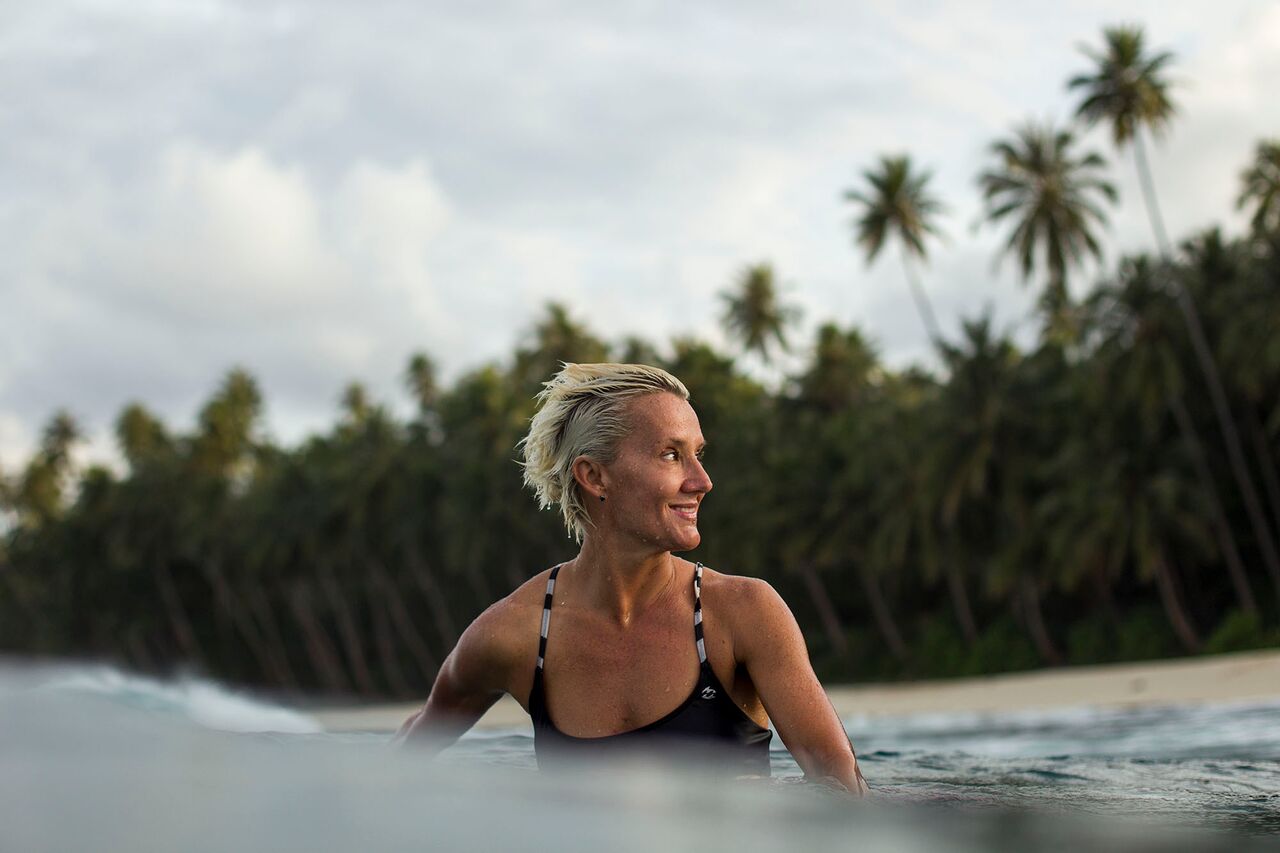 One summer Sunday, I was trying to figure out what to post to the Lenny Instagram account. That’s when I first spotted Keala Kennelly. I wanted to go to the beach (I always want to go to the beach in the summer) and wanted to post a still from a movie that took place at the beach. That train of thought led me to the movie _Blue Crush,_ but then I thought: _Why should I post an actress pretending to be a surfer? I should post a real surfer._ That led me to an incredible picture of Keala, a tiny figure surrounded by a literal wall of water, that took my breath away. Keala had (1), maybe of the year, at Teahupoo, Tahiti. I knew nothing about surfing, but I knew we needed to talk to her and find out more about the woman beyond the image.

And so, a few months later, I was on the phone with Keala. The 36-year-old, who grew up surfing and is the goddaughter of legendary surfer Laird Hamilton, turned pro at 17 and spent the following decade consistently ranked as one of the world’s top surfers. After taking a brief break from surfing to pursue acting (she made her acting debut in the aforementioned _Blue Crush,_ of course), she’s now back in the surf world, riding the gnarliest waves and inspiring surf God (2) to say things like “The craziest guy of them all is a girl,” about Keala.

It’s true that the gender disparity in sports is astounding. Other than tennis and maybe gymnastics, there are very few sports where women have equal or superior standing to their male counterparts. In surfing, this disparity is especially heinous; as Keala explains: men are rewarded for how well they surf, while women are rewarded for how good they look in a bikini. Keala and I spoke on the phone one afternoon in August about the perils of sports, being fearless versus being brave, and motherhood.

**Laia Garcia:** I know you’ve been surfing since you were young, but I wanted to know a bit about how you first got into “big-wave surfing.”

**Keala Kennelly:** I grew up in Kauai in a surfing family, and my dad taught me to surf. He still charges pretty big waves, actually; he’s 60-something and he’s still out there. I did the tour for a lot of years, and that’s really just you competing against other surfers, whereas “big wave” is kinda like a gladiator sport, you know? It’s not about you going up against anybody else except for nature.

**LG:** When was the time that you first went for a big wave? What made you decide that you needed to go for something bigger and crazier?

**KK:** Well, it was a slow progression. I grew up with Andy and Bruce (3)], and it was like the whole tomboy thing trying to tag along with the boys, you know? I just wanted those guys to respect me. It’s like a bravado, macho thing if you could ride through big waves, and they were always pushing each other to ride those kinds of waves, so I just followed their lead.

**LG:** Can you tell me a little bit about your routine on a day that you’re gonna go out and catch a big wave? How do you prepare mentally for that?

**KK:** You pace around a lot . It really depends on where we’re talking about and what waves, because the preparation differs from place to place, what kind of surfing. I try to just stay calm and not rush into things. I take my time, and that serves me really well. I don’t have any rituals. I just pace around a lot.

I chase a lot of swells. So I’ll be tracking a swell on the forecast for like a week and a half, two weeks; I’ll be watching this swell move across the ocean and just keeping an eye on it, day by day, getting a bit more nervous and more excited, trying to decide: “Am I going to chase this one? Are the conditions good, am I up for this?” And so, sometimes the most nerve-racking moments for me aren’t even necessarily in the water! It’s more in my living room, on the Internet, tracking the swell and looking at plane tickets because _that’s_ the moment you decide you’re gonna go. Because if I’m gonna pony up money for a ticket, I’m gonna go ride, and when it’s day of, it’s just “Game on!”

**LG:** Is chasing the swells your favorite?

**KK:** Yeah! I mean, it’s nice when I’m in Oahu and there are swells on tap, like, right in my backyard, but chasing swells is fun for sure. I really like flying into Maui because I get to surf with my friend Paige, who’s also a big-wave surfer, and we really push each other out in the water. We’ve developed a really nice friendship, and it’s rad because I don’t ever feel like we’re competing with each other. We’ve just got a mutual respect for each other’s talent and we get stoked for each other.

**LG:** Is it frustrating that there is still such inequality between male and female surfing? I guess it’s the same with almost every other sport, but there’s something about surfing that always gave me the impression that it was cool and progressive.

**KK:** The thing is, when it comes to making money in surfing, it’s about selling a lifestyle, and that lifestyle that they’re selling is just very different on the women’s side. On the men’s side, it’s about who can surf the best, but on the women’s side, it’s about who can look the best in a bikini, you know? So, yeah, that is frustrating to me, and that’s something I’ve been going up against my whole life, because I’m kinda the antithesis of that. I’ve always rebelled against that and been a tomboy, not feminine, not been what the sponsors were trying to push, and, you know, I’ve suffered financially for it. But this is who I am, and I’m happy and comfortable with myself and I think the sport and the industry need to change, not me.

**LG:** I was also surprised to hear that after you came out as a lesbian you actually lost sponsors, which seems unbelievable for something that happened just seven or eight years ago!

**KK:** I knew I liked girls from a very young age, but also I knew that me liking girls wasn’t cool or accepted, so I tried really hard to be straight, and I could tell that it was not my thing! It was really scary. I remember being on tour and being terrified that someone would find out, and it took a long time. Even now, I pretty much wait for a girl to ask me out or to kiss me, like I’m still terrified that I’ll get it wrong!

Things have changed now for gays and lesbians around the world, but I think the surfing industry is just really stuck behind the times.

**LG:** Does your fearlessness in the ocean influence the way you tackle other difficult things in your life?

**KK:** First of all, I’m not fearless at all! That’s such a huge misconception. I feel like to be fearless, you have to be completely ignorant of the fact that what you’re doing is dangerous and can cause you bodily harm. And I’m super-aware that all those things can happen, so I think that’s more being brave and not fearless. Fear is healthy because it keeps you alive! Fearlessness makes you do stupid things.

But there are times in my life where if I’m nervous to ask a girl out, you know, something stupid, I’m like, “You ride these huge waves — like, this is not gonna kill you! If this girl shoots you down, you’re not gonna die!”

**LG:** You’re a parent now. Does that affect the way you approach competitions and just how often you go out there?

**KK:** Yes and no. I always calculated my risks, even before I had a kid. I’m not trying to kill myself. I know sometimes it seems that way , but no, I really don’t want to die, that’s not the goal. It’s not about going out there and being kamikaze, it’s about really knowing your ability and knowing what you can handle and then pushing your own personal limits. When it comes to my son, I definitely think about him, and it just makes me calculate my risks a bit more. But at the same time, I want to make my son proud of me, and that makes me want to go bigger and charge harder. It’s a nice balance.

**LG:** How old is your son? Are you getting him ready to hit the waves with you?

**KK:** He’s three and a half! Well, that was my dream for him, everything I imagined when I imagined having a kid. But, well, my ex broke up with me, and she lives in St. Louis, and she’s decided to keep full custody. I can visit him in St. Louis, but there’s no ocean there, and I haven’t been able to take him to the ocean yet, and that’s been really hard.

I’m hoping that things are going to change. Me and my family are really struggling. We used my brother as a donor, but we’re not on the birth certificate. It’s a whole new ground, and it’s going to be a long road, but I hope that I can get the rights to him.

**KK:** It’s OK. I mean, it’s my reality. I just got back from visiting him in St. Louis, and oh, I had so much fun with him! I miss him so much, and I just want to take him with me when I go, and I can’t. But at least I got to see him, so I’m really happy about that. I hadn’t seen him in two months. It gets really hard when that much time goes by — you feel like you’re missing so much of their lives and there’s nothing I can really do about it. I’m looking into my options, but I don’t have much of a legal leg to stand on. I will find a way. It’s another challenge, like a big wave.