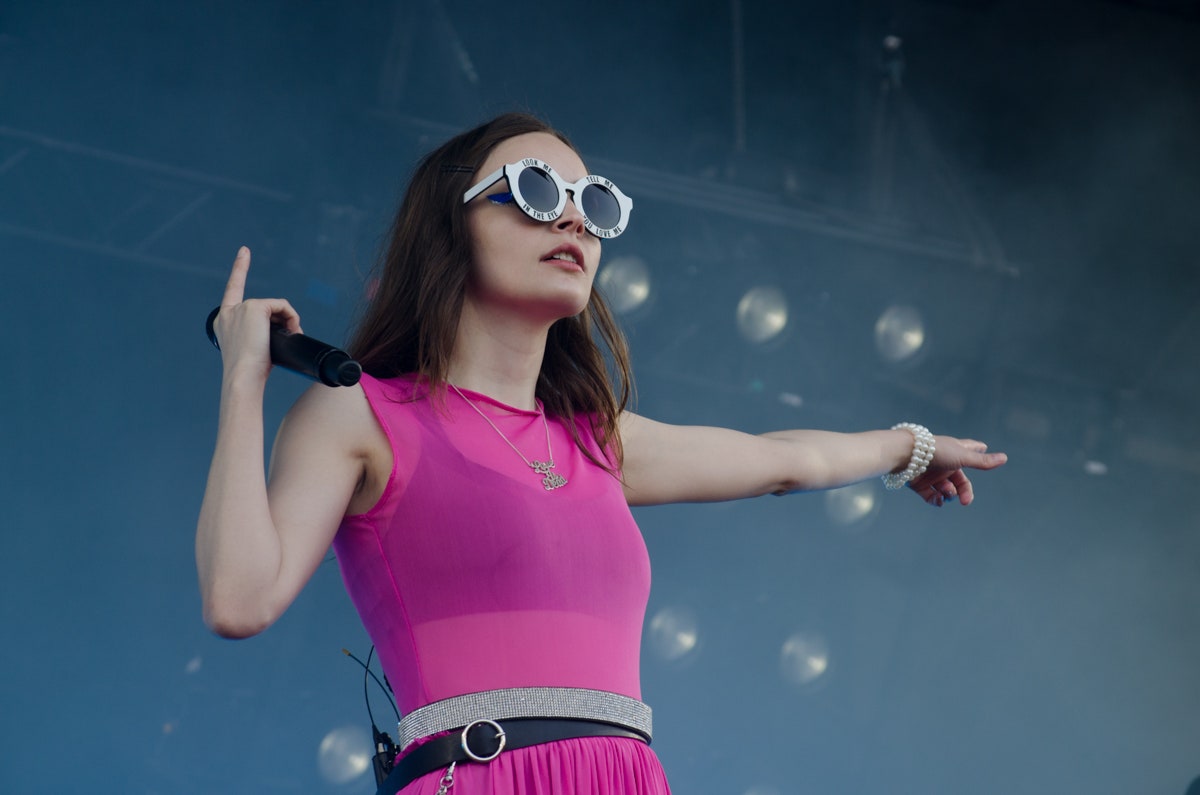 It’s a few minutes before CHVRCHES is slated to go onstage at the San Francisco music festival Outside Lands, and my interview with the band is momentarily derailed by Lizzo, whose set the band watches for a few moments in awe. CHVRCHES frontwoman Lauren Mayberry praises the rising hip-hop artist for making music on her own terms. It’s not surprising that the Scottish trio, made up of Mayberry, Iain Cook, and Martin Doherty, would be attracted to such an uncompromising performer. (1), since the band’s 2013 debut EP, *Recover*, CHVRCHES has been making uncompromising statements—both in its punchy electro-pop, which teeters between fairy tale and rave music, and in its members’ extracurricular activities, like lending their support to Planned Parenthood and staging a charity concert for (2).

But going into the recording of their third album, and living in New York “for now,” the members of CHVRCHES found themselves feeling the darkness and uncertainty of their adopted city. Many of their tracks focus on the emotional quandaries exacerbated by the current political climate, which is how the album got its bold title, *Love Is Dead*. As Mayberry tells me, the phrase is meant to raise a few eyebrows.

“For me, most of the record was more about figuring out why people are the way they are,” she says. “It’s difficult to go out in the world right now and not feel conflicted about the nature of people. I never wanted the record to be us complaining about shit, but I also think that in this moment, it’s OK to acknowledge that the world is far from ideal.”

Produced by Greg Kurstin (a name you might have seen attached to Sia, Adele, and Foo Fighters), *Love Is Dead*’s escapist tone is punctuated with Mayberry-penned lyrics that address the turmoil the world has experienced since CHVRCHES released its sophomore album, *Every Open Eye*, in 2016. Sometimes it’s explicit, like “Graves,” which references ivory towers and “bodies washing up on the shore.” But more often it’s a case of musical subtext, like the minor-key duet “My Enemy,” with the National’s Matt Berninger, a track written in the aftermath of a session with a potential producer that didn’t go well. (When asked why, Doherty says they were basically ignored by the man they were supposed to be working with, and mimics staring into a phone.) However, when asked if she’s attempting to encourage fans to think a bit deeper about the world around them, Mayberry says that’s certainly a goal, but not her only aim.

“I’m not really able to dictate what other people should do,” she says. “But I feel like, for us, it would seem disingenuous to ignore that stuff. Just because you’re in a band doesn’t mean you’re not a person with feelings and options. I do think that in this moment in time, if you stay silent on things, then you are complicit. I think you need to be cautious about what comes out of your mouth and what doesn’t as well.”

That sums up CHVRCHES’ worldview. As the frontwoman, and arguably the most visible member of the band, Mayberry is pragmatic about almost everything: writing a (3) about her experience with online sexual harassment (bottom line: no one should have to “deal with” cyber abuse); the number of times she’s been romantically connected to her friend—not boyfriend—Justin Long (“Can’t stand near a man without people writing that!”); and even her own voice, when it comes to speaking out on the matters that mean the most to her. She has, by her own admission, been told to stay in her lane more times than she’d care to recount.

“I do recognize that we’re in entertainment,” she says. “I don’t work in politics. But at the same time, you have to be conscious of the balance of wanting to do the thing people like you for and having a conscience in what you talk about.”

Mayberry pauses to consider the statement. Very aware that life is a process of continual education (“I’m conscious about the fact I’m a straight, middle-class white girl,” she says), she doesn’t want to come off as jaded or naïve. Like many of us, she’s just another person trying to do her best to understand the whole story.

“There are a lot of terrible things happening in the world right now. We see the best parts of people,” she says. “It’s an important thing to focus on. It’s put a fire under people to be more active and more aware and actually do something. Maybe it wouldn’t have happened in a more pleasant era.”