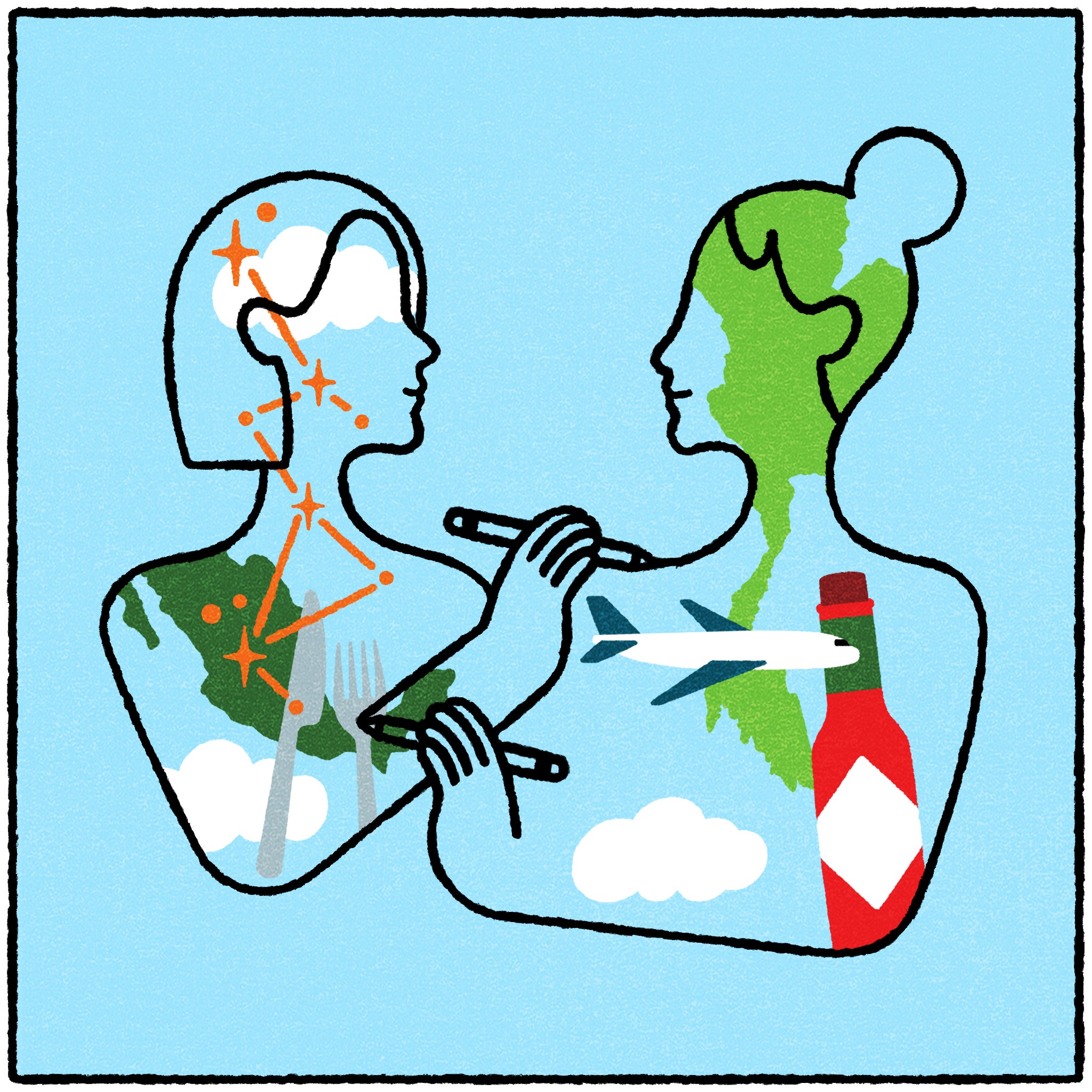 We are eighteen, in our first months of college and drinking cheap beer in the Kentucky twilight, when Tien proposes that we be roommates. She grew up in Ohio, in a Vietnamese-American family, and although she is tiny, she hugs me with a ferocity and enthusiasm that surprises and delights me. We live together for three and a half years in college, and during that time she introduces me to oysters. I eat so many — enthralled at being able to taste the ocean while so far away from it — that I almost get sick. Growing up in rural Arkansas, there were so many foods I had never tried. When I go home with her for Thanksgiving one year, I eat lobster for the first time (for breakfast!) and watch Vietnamese music videos with her parents. Later in our friendship, Tien introduces me to the century egg, which I try with trepidation although the dish (an egg preserved in clay, salt, and ash) smells of dead things. Tien eats it with gusto, even relishing the green-gray yolk.

In college, Tien is carefree, a delightful force of energy. I am a rule follower, the type of person who never misses class. She wakes me up in the middle of the night to read me her poetry, pulls me into the car with her boyfriend on a hot day so we can drive to the reservoir and swim instead of attending class, insists that I read romance novels in addition to the literature assigned by my English professors. One year, I invite her to celebrate Christmas with my family in Arkansas, and on Christmas Day we go skinny-dipping in the creek with my mom, screaming with delight at the shock of the water.

We are 21, and we travel to Mexico together in the summer to study Spanish. It is our first trip abroad together and it lasts six weeks. Living life in another language awakens a hunger in us to see the world, a hunger to escape Ohio and Arkansas and the constraints and prejudices of rural America. In our hometowns, women we went to high school with are already married and talk of buying houses. Neither of us has ever felt that we would fit into that mold of womanhood — we are young and restless and have a burning curiosity to see the world. In Mexico, we practice our Spanish, delighting in everyday interactions, even when we tell our host family we need more *jamón* (ham) for the shower when what we really mean is *jabón* (soap). Almost every day when we walk out of our host family’s house, Tien walks in the wrong direction to get to our school. I tease her about this still.

We are 24, and living together in a tiny hotel room in Yangon, Myanmar, and we spend our nights eating Hershey’s bars out of Tien’s suitcase. It is 2005, and there are few foreigners in the country. I am newly married but have left my husband on his own to travel with Tien for a month. We explore Yangon in taxis where you can see the road through holes in the floor. We wake up at 4 a.m. to hike through fog and rain to Golden Rock, a sacred Buddhist site, which, once we arrive, elated and sweaty, we discover women aren’t allowed to touch. Men gather around the rock, which, according to legend, balances on a strand of Buddha’s hair, and they make wishes. We resist the unfairness of this small prohibition. We take a bus to Bagan, and when it breaks down in the middle of the night, we stand in the countryside searching out constellations in the clear night sky.

We are 30, and we have sticky rice and Thai iced tea for breakfast in Bangkok. While we eat, we talk about all the other food we plan to eat the rest of the day. At the time, I am living in the United States, working on a Ph.D., and Tien is a freelance consultant based in Bangkok with her boyfriend Mika. Tien has to work when I’m there, so she sends me to Laos for a week with Mika to test out a bike trip for his travel agency. We bike hundreds of kilometers through the mountains in the sticky heat of summer, stopping to drink beer with locals. Our friendship is forged out of a mutual love of Tien, and as we bike, I tell him about how in college she would change the clock in our room to display hours later than it was, so that when she realized the real time, she would feel like those extra hours were a gift.

After I return from Laos, Tien and I buy flights to Bali. When we arrive, we go to a place where little fish eat the dead skin off our feet. We travel together for a month because anything less seems silly and impossibly short, given how difficult and expensive it is for us to see each other. In Bali it is hot, and one day we are both irritable. We have a fight in the streets of Ubud, something about who is better with directions. We are tired and the fight turns ugly. I return to our hostel and cry myself to sleep, and when I wake up Tien is sitting beside me with a kitten. “I’m so sorry,” she says. “This is for you.” And she places the purring kitten, which she had grabbed off the street, on my chest.

We are 32, and I am in Honduras, chasing down a husband who doesn’t love me. Tien is living in Myanmar again, and we write back and forth as I share my worries about my relationship. She shares her doubts about returning to Myanmar: “Yangon feels like an old glove, but I have new callouses, fingers rougher, and the glove doesn’t slide on the same.” And then, to reassure me, she writes, “I love you. I also think you make the world a better place, not just for me but for everyone who is lucky enough to call you a friend, even in passing.” It feels like she is right there hugging me.

We are 35, and walking along the Malecón in Havana, Cuba, as Tien opens her purse and says, “Salt, pepper, two bottles of Tabasco. Sadly, I could not fit Sriracha.” In college, she salted food to the point of inedibility, and in Cuba, due to food shortages, she fears her food will have no taste. She gets so sad at the thought of eating bland food that she even suggests “Let’s bring my pepper to the beach” when we go to Trinidad. We spend two weeks traveling around Cuba and living with local families. We ride around Havana in a vintage taxi with arms full of glitter-covered flowers — a gift from boxers we met on the Malecón. We gallop at full speed through the mountains of Viñales on horses. She runs out of Tabasco before our trip is over.

We are almost 36, and Tien writes me from Yangon, “Dearest Alice, Can you believe it was roughly three months ago when we hugged goodbye in Havana? My post-Cuba depression lasted a small lifetime — from stepping on the plane until last week, to be exact.” I feel like she has read my mind, because I, too, am in a post-Cuba depression, and I write her back proposing our next trip.

We are 36, and we are driving through Yangon in a taxi packed full with cases of sparkling wine as we head to the airport to fly to the Mergui Archipelago. There we will board an old ship and spend a week on the ocean. When Tien loves, she loves with all her might, whether it be food or drink or people. Her partner of twelve years, Mika, has cancer. He has organized the trip for us, and on the first night Tien and I stay up late drinking on the deck of the boat. I tell her, “I knew Mika loved you when he took me on that bike trip through Laos. I was so out of shape that he threatened to put me on a bus if I didn’t bike faster. He put up with me because he loves you and you love me.”

We are 37, and Tien calls me on Skype early one morning from Myanmar. I’m working in Reynosa, Mexico, and sharing a hotel room with two photographers. Tien, surveying the scene, shouts, “A slumber party!” And we laugh like crazy, her energy infectious from thousands of miles away. I imagine us in our 90s, still traveling together, slower and with more wrinkles, but giggling like girls, as curious and full of hopes and dreams as we were when we met at eighteen.

*Alice Driver is a freelance journalist and translator based in Mexico City.*