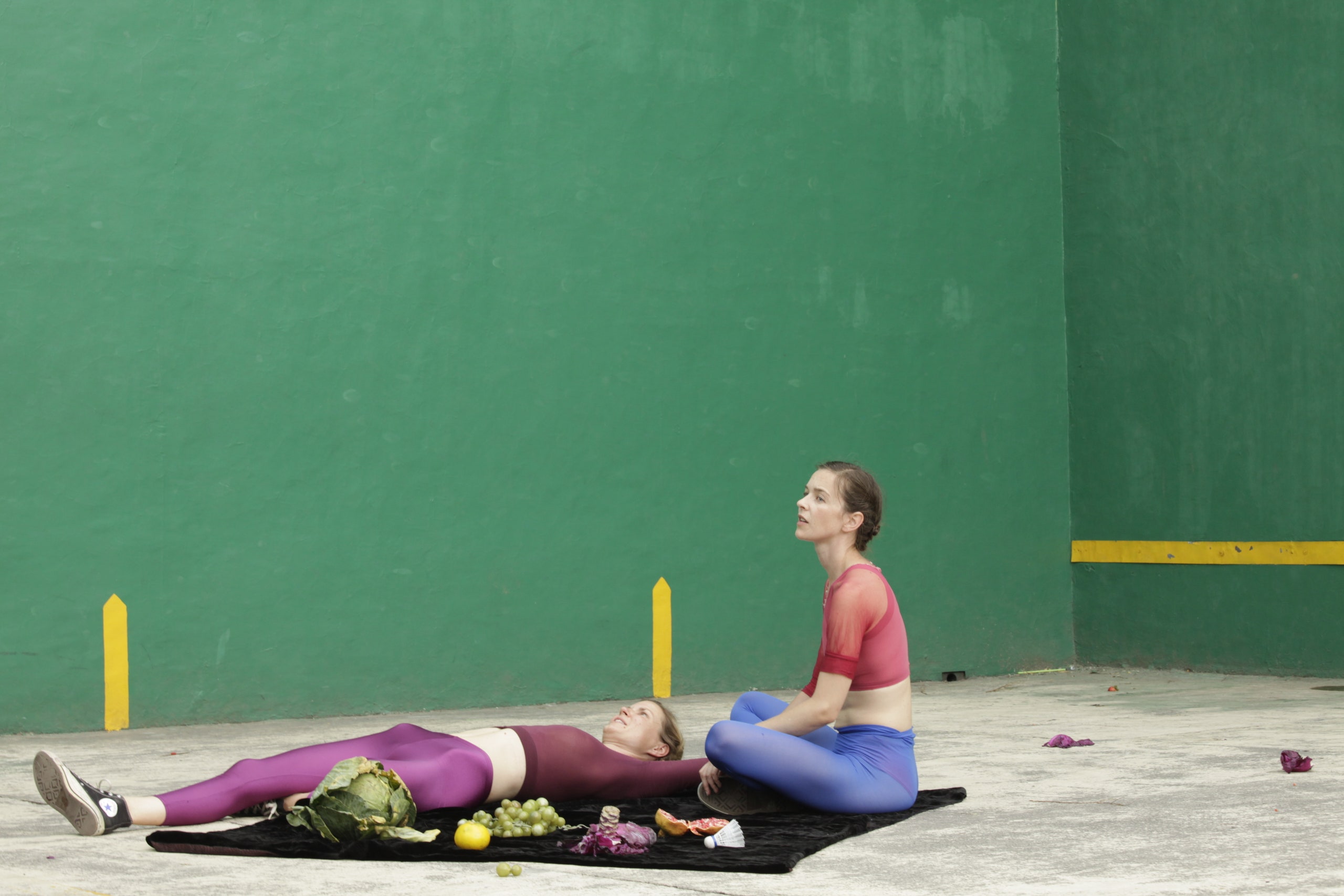 It’s like we trusted some deep sixth sense. We left for Mexico City without cell phones, or any address or contact for the person we had traveled to find. We sought a woman who created a matriarchy, who lived and worked in this feminine consciousness despite society relegating her to the periphery. It was 2009, and she was the last living Surrealist, then 92 years old.

Leonora Carrington was born in England in 1917 to aristocratic wealth, which she rebelled against until she finally ran away to Paris, at age nineteen, with the Surrealist Max Ernst, who was married and 46. When he was captured in World War II, Leonora fled and wound up in an asylum. Eventually, she escaped by marrying a Mexican poet. They went to Mexico City, where she worked for almost 70 years, painting, writing plays and short stories, and making posters for the Mexican women’s-liberation movement in the 1970s.

Her friendships and collaborations with Leonor Fini, Remedios Varo, and Lee Miller were inseparable from her life as a Surrealist painter. Together they invented their own worlds, mixing myth, magic, and alchemy, with women and their kitchens, everyday objects, and domestic animals at the center.

Alisha had been conjuring Leonora for years. She had exhibited a collection of Leonora’s novels bound into sculptures using leather, snakeskin, and gilded teeth, and had performed Butoh dances wearing papier-mâché animal heads that recalled those in Leonora’s stories. Alisha had started an MFA and was shifting her practice, but her work with Leonora didn’t feel complete.

On the other hand, Heidi was struggling to write her first novel, about an old woman, and had happened upon Leonora’s *The Hearing Trumpet* and discovered that it focused on an eco-feminist heroine, who, like Heidi’s, was 92. Heidi was breast-feeding her second child, trying to write, but it wasn’t going well.

Despite the fact that we were in different places (Alisha was seeking creative closure on a long-standing obsession, and Heidi was seeking a new way into a stalled project), there was something about Leonora that compelled us both. Leonora raised children and had a full artist’s life. We wanted to be like her but had no idea how. As mothers and artists, we needed this new vision.

On the phone one night, we talked about tracking Leonora down, and suddenly we had a Hotwire itinerary to Mexico City.

We decided to create live, ritualistic performances that would both inhabit the compositions and content of Leonora’s paintings — full of half-animal, half-human figures, fruits, and vegetables — and conjure a live meeting with her. We wanted to inhabit aspects of her life (the debutante, the fallen aristocrat, a faceless feminine creature) through clothing. It was like packing for a dream, bundling an ’80s ball gown, a shredded black Edwardian dress, and a papier-mâché rabbit head, among other things, into our suitcases.

We asked our friend Natalie, then a photo editor in New York, if she would document these picnics. She had just come back from Mexico City and was full of ideas for strange, resonant locations. Natalie admitted she wasn’t a fan of the Surrealists and hadn’t heard of Leonora, but she became swept up by the mood of the project and put her thinking toward it.

Before we left, we wrote emails back and forth, wondering about riding up to her door on horses. Could we rent horses in Mexico? Could we make them from paper and fold them out of our luggage? Were we insane? We were leaving babies, jobs; one us was opening up a marriage. We had only nine days in Mexico City — but there was an urgency to erase all the domestic chaos we were leaving behind us.

We didn’t know yet that we were about to be middle-aged. We were in our mid-thirties then, and unaware of how everything would shift, the way it does for women, in just a few years. We needed to find this old woman so close to death. We had questions for her.

We took taxis to mercados and bought fake grapes and a giant white plastic shell. We were staying with a French filmmaker named Florent. His house was narrow, three stories high, and on a dead-end street. Our room was on the roof, with sliding doors that opened out onto the sky and stars. Our feet were filthy and red from the clay-covered roof. We drank tequila there, planned our outfits, and tried to figure out how to find Leonora.

We confessed to Florent that we didn’t have Leonora’s address. So we set up our first picnic. Natalie had found a racquetball court high on a hill at the National Autonomous University and we played badminton with corner-store racquets, looking down at the hazy city below. We braided our hair and cut up colored nylons to wear. We laid out a ripped piece of black velvet and made a still-life with cabbages, Leonora’s signature vegetable. We wound up kicking the crap out of the cabbage. Couples were making out on the adjacent lawn. When we got back to Florent’s house, he told us that his ex-girlfriend might know somebody who lived on Leonora’s street. It was a lead — finally.

For Leonora, food was almost like a drug. It was a way into other worlds. One thing can transform into another, and humans are part of that process. Pomegranates had alchemical properties. We couldn’t find all of her referential foods, so sometimes we used plastic substitutes, like these fake grapes.

When we received the name of the street from Florent’s ex-girlfriend, we went there but didn’t know which house was Leonora’s. We tentatively knocked on several doors until finally a housekeeper said, “Come back another day, Leonora is unwell.” The idea of her being sick filled us with dread. What if she’s right there and she doesn’t agree to see us?

We dragged our suitcases full of props to an abandoned fountain near Leonora’s house and performed a picnic there. It rained, but we barely noticed. Heidi wore a giant rabbit head that Alisha had made, wrapped in a veil. Natalie covered Alisha’s face with her hair. Heidi ate the picnic food blindly while Alisha did a Butoh dance and put a resin-cast hearing trumpet, like the one from Leonora’s novel, to the ground. It was like we were begging her spirit and the spaces around her house — Mexico City itself — to hear us and lead us to her.

We were shifting easily between each other’s clothes, getting closer physically, napping side by side, drinking and eating at strange hours. In a park, we laid out the black velvet cloth. We drew artichokes in ink, hundreds of them. The pages blew in the wind. Dogs came from every direction, arriving peacefully in droves. When the Mexican police marched up and confronted us, we were already in another dimension. They were surprisingly charmed. Instead of ticketing us, they took home a drawing.

|||*La Galina Ciega* (The Blind Hen), the inner garden of the home of Leonora Carrington. |||

We came back to Leonora’s house two days later, and this time she opened the door herself. We told her about our project, how we wanted to interview her. She moved slowly, almost as though underwater, and we followed her and her small white dog inside. After talking in her dark kitchen for hours, drinking tea and smoking Marlboro Golds, it felt like Leonora trusted us. She led us up her stairs into a sunlit living room lined with books and plants. We were struck by the power of her objects — her own totemic sculptures of hybrid women-animals, huge serpent tapestries, and elaborate oil paintings we had never seen before in any book.

In Xochimilco — a working-class neighborhood that, despite a heavy tourist presence, has the feel of an abandoned amusement park — we rented a Day-Glo-painted wooden boat and picnicked, eating fluorescent gelatin cakes. Meandering through ancient Aztec waterways where mariachi bands played as they floated by, we stopped briefly on the Island of the Dolls. Its deformed trees hung with grubby plastic dolls. To get there, we gangplanked over the mud, walking along a rough wooden board.

The boat was tippy, eerie, and also celebratory. We had met Leonora that day, and she had asked us to return again the next day — our last in Mexico City.

We brought Leonora her favorite cigarettes, and planned the questions we wanted to ask. Her house and the stories she told us opened a portal of some kind. She touched on female friendships and the challenges of collaborating with competitive women. She told us how Picasso once asked her to go buy him cigarettes, and then she looked around and realized she was the only woman in a room of men. And she told us of her passionate relationship with her husband, a man with whom she shared no common language. She told us that women sometimes need to live an Other life, no matter how they get there.

* (3) is an artist and the author of* Bunny and Shark *and* You have hair like flags. *She lives in Montreal, Canada.*