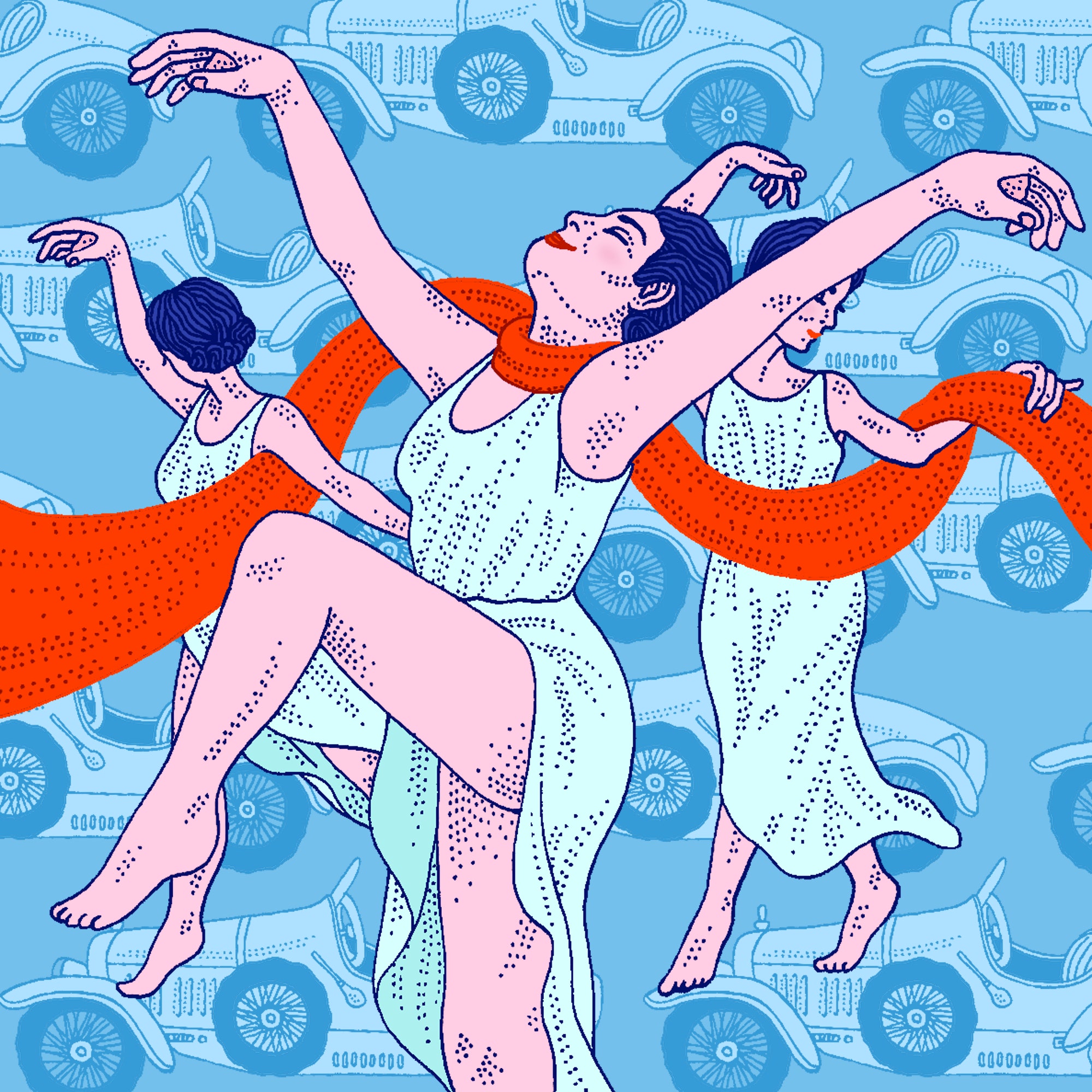 *In this column, Alexis Coe, Lenny’s historian at large, will conduct Q&As with specialists in archives across the country, focusing on one primary source. For this post, Alexis spoke with Amelia Gray, author of Isadora: A Novel, about Isadora Duncan, the fascinating woman now considered the mother of modern dance. (Read Alexis’s previous columns here and here.)*

__Alexis Coe:__ Your new novel, *Isadora*, is inspired by the life of Isadora Duncan (1877–1927), a dancer who rejected the rigidity of classical ballet in favor of a style that emphasized freedom of movement. Underappreciated in America, a young Duncan boarded a cattle boat headed for England, where the fashionable, well-heeled hostesses of London embraced her. She toured European crowds, developing a taste for the kind of barefoot woodland nymphs she popularized. Today, she is considered the mother of modern dance, a title she would’ve hated, but as Anne Sexton once said, “The dead belong to me.”

Duncan went on to become an eccentric, a feminist, and a Communist who ran with artists and intellectuals and sexy Brits, all of which we’ll get to, but first I have to ask you about something you saw in the archives of the Library for the Performing Arts at Lincoln Center: a piece of the scarf.

__Amelia Gray:__ Isadora was living in Nice and trying to get in touch with her old benefactors, asking here and there for loans. Her friend Mary Desti was visiting at the time and gave her a beautiful garment, which I’ve read was a scarf or a shawl, crimson red and twice her size. She draped herself in it one afternoon to ride in a convertible car, a handsome mechanic behind the wheel. She called out one last line to the gathered crowd — *Adieu, mes amis. Je vais à la gloire!* (some argument here if she said “*gloire*” or “*l’amour*,” off to a tryst) — and as the car leaped forward, the tail end of the scarf wrapped around its rear right tire. The accident broke her neck at once, and she died right there.

__AG:__ It must have been horrible! Mary Desti was there, her dear friend, and a Russian filmmaker named Ivan Nikolenko who had just convinced her to allow him to record her on film. A 32-year-old mechanic and driver named Benoît Falchetto was behind the wheel, and a crowd gathered on the promenade des Anglais as Falchetto was running around, crying, “I’ve killed the Madonna! I’ve killed the Madonna!” Mary was the one who cut the scarf away from her and got her out from where she was tangled up against the wheel of the car. She flagged down a motorist and got her to the hospital, where they found her spine broken in two places; she had died instantly.

> All they had was a few thick crimson threads tucked in a plastic pouch, but it was as if the thing had an electric charge.

__AC:__ When Gertrude Stein heard about Duncan’s death, she said, “Affectations can be dangerous.” She was definitely eccentric, but some newspapers said she’d been wearing the red scarf since she “took up Communism.” Do you think she was truly devoted to the cause, for which her American citizenship was revoked in the 1920s, or do you think the color of the scarf was just a coincidence?

__AG:__ At one of the later performances, she pulled her costume aside to bare her breast, shouting, “This is red and so am I!” She was a performer since she was nine years old and seemed very aware of things like that; I’m certain it wasn’t her only red accessory. From her own writing on the subject, she claims to have seen Communism as an answer to abusive labor practices, to child labor, to a sense of racial inequality she seemed more aware of toward the end of her life.

__AC:__ So she went through a considerable change toward the end of her life, from conspicuous consumer to Communist. How much of this was a reaction to the tragic death of her children?

__AG:__ Well, in some ways she never changed. Before she died, she had been trying to get more money out of her former lover Paris Singer — the son of Isaac Singer and heir to the Singer Sewing empire — and around that time, she’d been selling the furniture in her studio, which doesn’t seem to have been a moral choice on her part. It seemed that she loved the idea of Communism, the invitations from the Bolsheviks to Moscow, but she denied the cause from time to time. I think the reality of it was that she found New York difficult and Europe passé, and she might have seen in Russia a unified set of ideas into which she could maybe insert her own. I do think she tried to fit herself to the time, understanding how she needed to fill a theater one way or another.

__AC:__ Is the infamous scarf the story that brought you to Isadora?

__AG:__ The scarf, the scene. The last words, the dispute of them, that argument between glory and desire. After crawling around in her head for a few years, I found myself wanting to push the whole sad ending away, though. The end of Isadora’s story became tragic in a different way for me, tragic in the way that she was reduced to tragedy, an entire life boiled down to a cute line about affectation. I think it’s because I’m usually working in pure fiction, where I control the vertical and horizontal, rather than working with a life that never really belonged to me in the first place.

__AC:__ What was it like to actually see it in person?

__AG:__ Oh, I immediately burst into tears. This came at the end of a long day of navigating the Jerome Robbins Dance Division of the New York Public Library, requiring two locations and twenty boxes. I wasn’t looking for it particularly, rather taking notes on her notes and considering her handwriting, ephemeral stuff. It was there next to an envelope where I think Mary Desti herself must have saved it, in the same way my mother keeps a lock of my baby hair. All they had was a few thick crimson threads tucked in a plastic pouch, but it was as if the thing had an electric charge. I put my palm over it and cried.