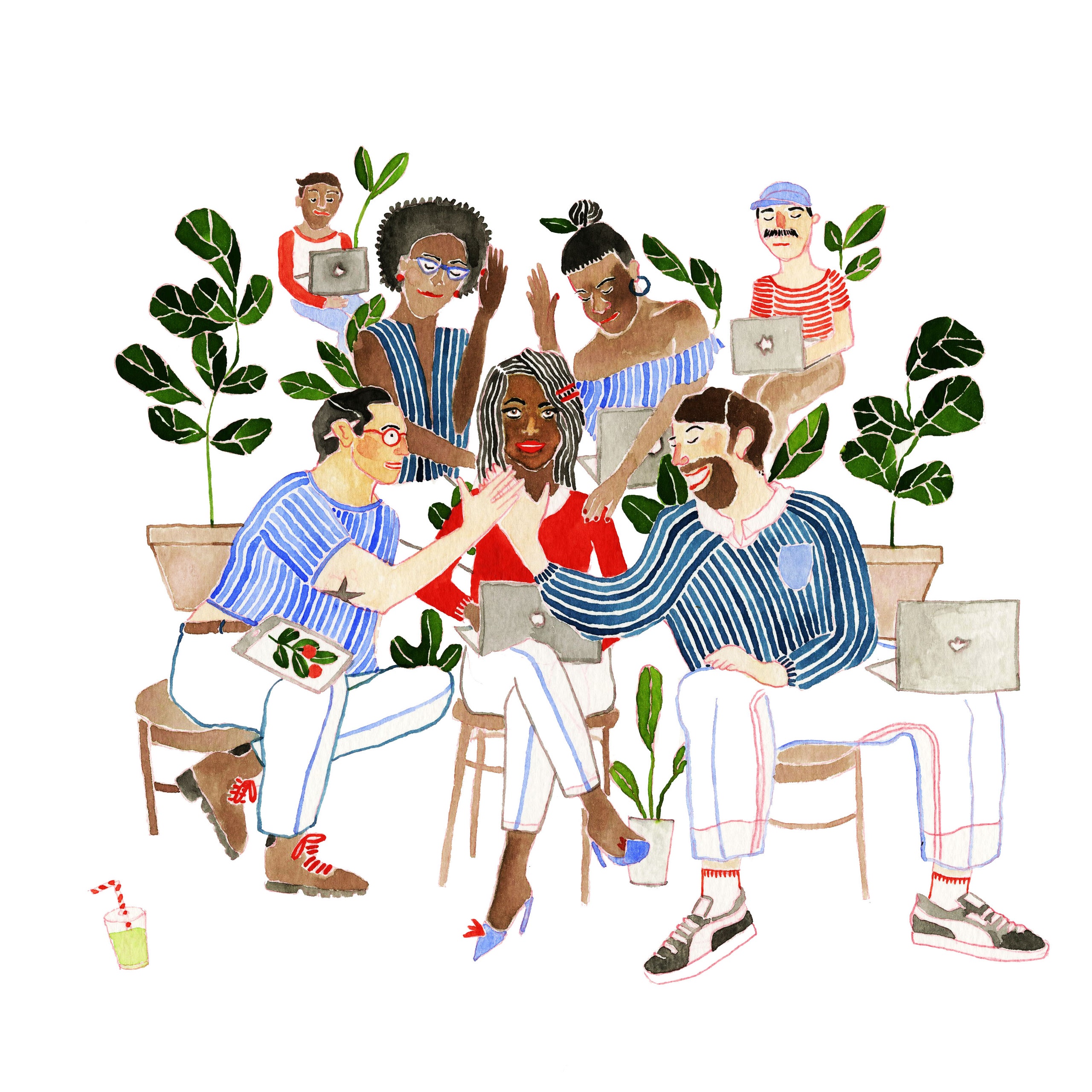 It was the spring semester of my sophomore year of college, and Hewlett-Packard (HP) was on campus recruiting from Howard University’s engineering department. My pangs of hunger became pangs of guilt after devouring several slices of pizza at the company’s internship-information session and then leaving, so I quickly ran to a nearby lab and cleaned up my résumé. I handed it to a 5’2″ black woman who was physically easy to overlook but impossible to overlook professionally. This was Ann, a black HP executive who would become my mentor and my friend.

Mentorship has been essential to my career. Being a woman in tech can be lonely, and being a black female programmer can be even lonelier. People still aren’t used to seeing you in certain spaces. There are days when some bro blurts out something sexist or decides a black joke is how he’ll greet you, or more recently, pens a manifesto professing your inferiority. In this environment, you need support. Or sometimes you just need guidance on negotiating a salary. Some days you don’t just need mentors, you outright need sisters ― women who get it and get you.

In Ann, I saw me, fast-forwarded twenty years, right down to the copy of *C Programming Language* she kept from college on the massive bookshelf at her house. She took me under her wing: She introduced me to the joys of Frenchy’s Chicken and Jesus. I got baptized ten years ago at her church.

But that wasn’t all. One Sunday after church, I asked her what it was like being a black female executive in an environment where she was often the only one among many men, some even more senior than her.

She told me how they would sometimes talk over her and ignore her ideas. As we crisscrossed Houston’s tangle of highways, she told me that if they didn’t acknowledge her ideas in meetings, she would repeat herself and, if necessary, bring those thoughts up later in writing. She instilled in me that I am my most powerful advocate. She also taught me about looking for “allies” long before that word became a part of diversity in tech’s lexicon.

But she changed my life in an even more important way. During my second summer at HP, despite doing really great work, I found that I was easily distracted, often pulled all-nighters to finish projects, and had difficulty concentrating and staying organized. Since she wasn’t my direct supervisor and I trusted her, I pulled Ann into a conference room one day and told her about this. After listening, she gave me strategies for managing myself and my time.

But later, she emailed me an article listing symptoms of adult attention-deficit hyperactivity disorder (ADHD). Three years later, after struggling back on campus and in my first job out of college, I remembered this article and went to get officially diagnosed. I’m not sure how she knew to send me that article, but being able to name the constellation of struggles I had had up to that point was life-changing. Now I work with a coach to keep me organized and better able to leverage the gifts of ADHD, such as immense creativity and a knack for learning.

The secret here? Ann was a Howard alumna who reached back to recruit at her alma mater. Don’t be afraid to tap alumni networks for mentorship and connection.

Before becoming an entrepreneur, I reserved the word mentor exclusively for someone much more senior than me. Someone who, in some circles, would be called “seasoned” as if they were on the hot-food bar at Whole Foods. The further along I’ve gotten in my career, though, the less useful it seems to classify mentors only on the basis of where they sit on an org-chart. They don’t have to be the woman with the corner office and an executive assistant.

One example of this is a friend and peer-mentor named Danielle I found via Twitter. Though Twitter some days might leave everyone wondering if we’re on the brink of nuclear war, it has so much more depth than an afternoon’s worth of deranged tweets, so with that in mind, don’t hesitate to think of your social-media connections as potential allies. After college, I went back home to Fayetteville, North Carolina — a place not particularly known for tech unless it’s for the U.S. Army. To keep up with everything, I found myself spending more and more time on the 140-character network.

One day, I looked for people in my local area who also used Twitter and stumbled upon “tweetups.”

Through friends I connected with at a tweetup on a beach, I met Danielle. Danielle has been everything from a bouncer at a club to an expat who lived in France for ten years to an entrepreneur with her own social-media-management company. She is formidable. Danielle is my go-to person if I need to know if I’ve gotten my point across effectively in a business email or how to respond in moments where I feel taken advantage of professionally. Eleven years my senior, Danielle is basically the sister I never had. Later on, when I started The Human Utility, which pays water bills for families in Detroit and Baltimore (and sprung from a discussion on Twitter — see, I told you it was useful!), Danielle provided unparalleled support.

Lately, I’ve found myself moving into an advisory role: rattling off everything I know about building a not-for-profit from scratch to anyone who cares to listen, or fielding questions, over tea, about what programming framework to use to quickly test a startup idea (be lean and validate ideas by building as little as possible by avoiding frameworks as much as possible). Other times, I’ve had an inbox full of startup incubator applications to edit after offering to do so on Twitter. I truly like to help when I can. But as I think mentor-mentee relationships are more than just one-off moments of offering advice, my own path to becoming a full-blown mentor for anyone is incomplete. Still, I hope my career thus far can at least be held up as one example of what’s possible.

Harkening back to the Houston summers of nights spent leafing through my Bible, one verse always sticks with me — Proverbs 27:17: “As iron sharpens iron, so one person sharpens another.” Whatever your religious leanings, seek to be the sharpest knife in the drawer. Get mentors. And if you’re lucky, they’ll be like sisters, too.

*Tiffani Ashley Bell, a programmer and serial entrepreneur, is the founder and executive director at the Human Utility, helping families in Detroit and Baltimore with their water bills.*