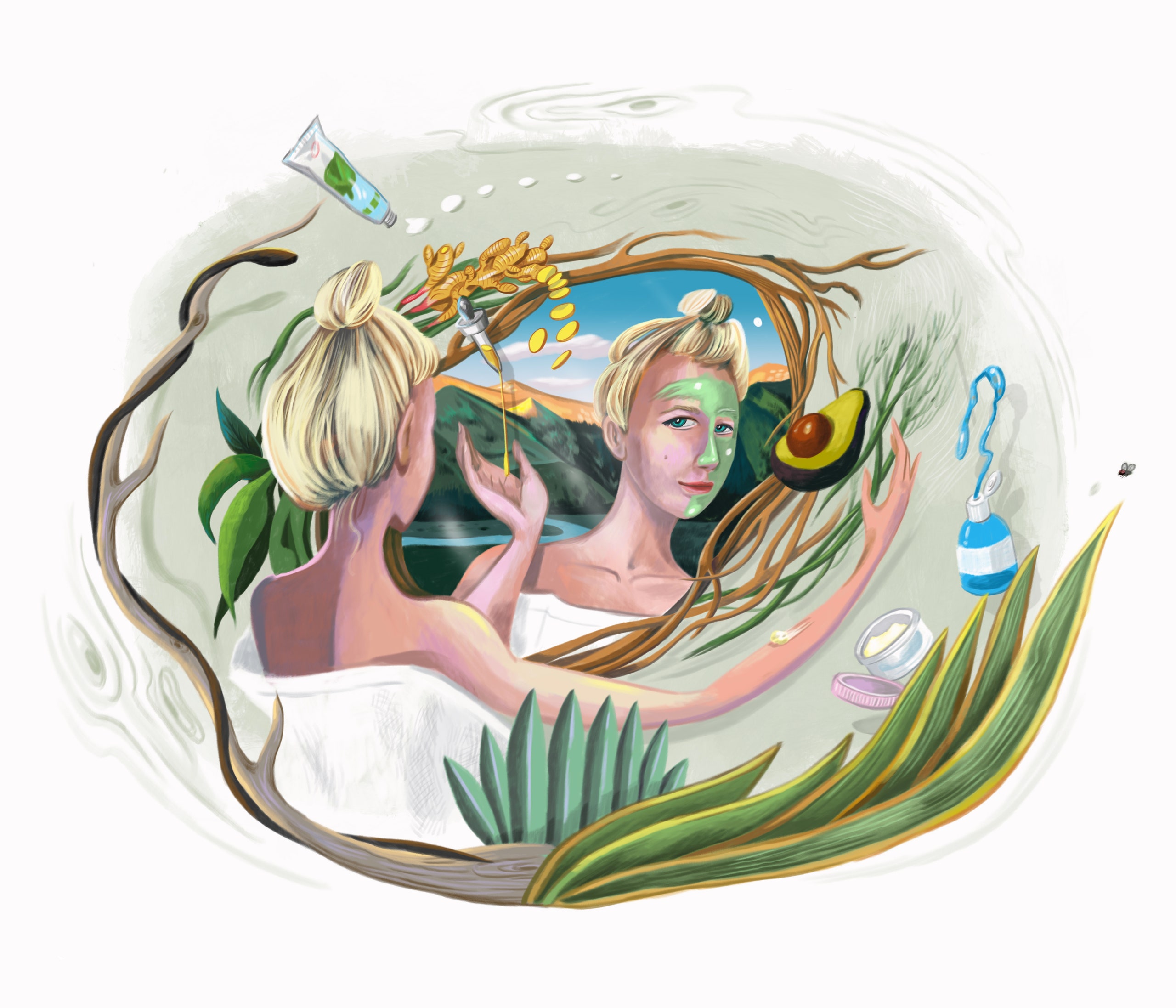 We arrived at Shelly Beach coming up on 24 hours without sleep. Earlier, it had been pouring with rain. We’d driven past statues of moas — giant, flightless birds native to New Zealand and now extinct — and in our sleep-deprived fever had been convinced they were moving. But at Shelly Beach, the rain tidied itself away, and we were left with gray skies and a sea that looked like a mirror, silver and still. My father and brother wrestled with the motor-home beds, coaxing them out of walls. My sister sat smoking on the jetty. My mother, youngest sister, and I claimed the first bed, lying there under cool sheets, half-dazed with exhaustion and heads still rattling along until Mum got up again to make us Bloody Marys.

“Please don’t talk. If anyone talks, I’m going to kill you,” I said.

“I hate you all,” my mum said pleasantly.

We rolled giggling back into our beds, and I drifted off into blurry, red-warm sleep. When I got up, my skin felt stretched out and rough. I put Aesop’s Hydrating Masque, a blue chamomile in a thick goop, all over my cheeks, watching the color seep back into my face. Outside, everything was dark and still, and my family were curled all about, murmuring in their sleep.

At the end of August, I went home to Australia for the first time in two years. Visas, bureaucracy, and money had conspired against me, and I’d been away from my family for much longer than planned. My family are, and always have been, obsessed with one another. We’re in near-constant communication, even when I moved to Germany and one of my younger sisters moved up to work in Kakadu, a national park in Australia’s Northern Territory. We trade inside jokes like hands of cards, fight, make up, gossip about one another to strangers as though we’re talking about celebrities. It still occasionally surprises me that other people don’t talk about their families like this, with a heady mix of frustration and myth. When my sister and I were due to visit home at the same time, we decided it would be a good idea to go on a family holiday, our first in five years. All six of us (*I know*) living for three weeks in a self-contained motor home (*I know*), traveling around New Zealand and doing our best not to kill one another. It seemed like a perfect plan.

My wife lay on our bed while I packed. “Do you guys know what you’re going to do?” she asked. And then: “Do you really need *three* toiletry bags?”

“I think we’re going to figure it out,” I said, carefully laying out my products in heavy jars and cracked tubes. Basics in one bag: Mario Badescu’s cleansers and toners, which saved my skin; a La Roche Posay moisturizer; Biore Sarasara sunscreen, whose pleasant pearly sheen I will swear by forever; the Ordinary’s lactic-acid and niacinamide serums; a series of tried and true masks. Another bag held the fancy products I use when I’m feeling every bit as broke and useless as a 25-year-old can be, products that came to me via gift voucher or hand-me-down or an invoice, carefully saved. A Chanel cleanser, a serum from Pai, Armani foundation too pale for the friend who had purchased it. A third bag for makeup. A fourth that I produced, while my wife laughed, to take on planes: Glossier’s priming moisturizer and perfecting skin tint, a Kiehl’s travel-size Blue Herbal cleanser, Mario Badescu’s rosewater spray.

They were like lucky charms. My wife, with her clear skin and perfect brows and eyelashes so long it always looks like she’s wearing mascara even though she never does, doesn’t understand them. But she leaned over and tapped each of the bags, grinning up at me, like she was casting a spell.

I’m skeptical about skin care as magic. It’s easy to buy wholly into the skin-care-as-self-care movement, forgetting the vast oppressive structures the beauty industry is built on, forgetting the industry’s racism and misogyny, forgetting the struggle of income and accessibility. I don’t think my cluttered collection of moisturizers and exfoliators is anything wholly kind or tender, even when I try to use it kindly and tenderly.

> Skin care taught me to like my face, or at least be interested by it, when nothing else had.

All the same, skin care taught me to like my face, or at least be interested by it, when nothing else had. And though I live a strange and lucky life, my friends and family sometimes feel scattered, so that I have to pick sides without wanting to — stay with my wife in Germany or my family in Australia. The sacks of serums I can take with me, like some mad skin-care Santa, and build quiet homes through habit and domestic ritual wherever I am: in Melbourne, in Berlin, in New Zealand, in the air.

New Zealand landscapes are shocking, so beautiful, that they unsettle. You can’t get used to them. My dad, incredulous, said, “Every time you get up, you want to take another photo.” My mum reached out to run her hands over tree trunks, in awe of them; a blend of arctic and tropical, mangrove-esque shrubs with icy lime growths of lichen. I sat in the navigator’s seat, my bubble pouch of charms thrown up on the dashboard with my feet. Every few hours, I’d pass back Lucas Pawpaw Ointment for any chapped lips or cuticles.

We stayed at a different campsite every night, tracking south for 3,000 kilometers. I woke up each morning frozen, trying to work out where I was, my sister’s feet in my face and the windows fogged up with the last of New Zealand’s winter. Eventually the only way to orientate myself was to blearily shove my feet in my brother’s Ugg boots, trek to the latest in a series of campground toilets, and wash my face.

I set my wash bag up in wooden cabins built in the ’70s, still flaunting the orange curtains to prove it, at huge rows of sinks that looked like they were made for summer camp. At night I followed old, beloved routines, the same ones that I do at five in the morning, stumbling home from a raucous night out in Berlin, the ones I can do in my sleep. With my eyes closed, rinsing my face, my wife could have been in the next room. In the bathroom, my sister and I stood at the sink together, mutely passing toothpaste and cleansers back and forth. The bathrooms with paper towels were the best: something to pat your face dry with.

My skin hesitated, then bloomed in the cool beginnings of New Zealand’s spring. One week in, I left my stronger exfoliators — the lactic acid, the Paula’s Choice 2 percent BHA liquid — buried at the bottom of my bag. I didn’t have to fight off the grime of the city at the end of every night; instead, I relied on my sunscreen and cleansers, going to bed fresh, waking up each morning to add a layer of protection. I stopped wearing makeup, for the most part, though I used Glossier’s Priming Moisturizer as religiously as ever. Nothing else, not even tap water stolen from a glacier, can soothe the redness of my skin.

In Punakaiki, my siblings and I pelted over rocks and threw ourselves into the Tasman Sea, my sisters like washed-up sprites, my brother yelping after waves. We sat on the sand with foam gathering around our waists and the high Jurassic cliff faces above us. Later, I patted in Kiehl’s Daily Reviving Oil, sunflower yellow with the comforting smells of ginger and turmeric, which billowed over the deep cleanse of the sea and countered the drying tendency salt has on my face. The next morning, my sister stared at herself in the mirror, outraged at the two pimples that had blossomed overnight. Nelsons Acne Gel is one of the few homeopathic treatments I trust; it was recently unexpectedly and tragically discontinued. I handed my last tube over, wordless and bitter.

We stopped for two nights in a holiday park at the base of Franz Josef Glacier. We were too tired to drive anymore, too tired even to embark on another hike. We spent a day sleeping and ducking into a supermarket for fresh supplies. Overhanging the park was the sheer slope of the mountains, palm trees framed against a rain forest, snowy peaks, and then a block of ice. “It looks fake,” Mum said, and took another photo.

My sister and I sat silently in the motor home wearing Korean sheet masks — Pure Essence Avocado, which set my cheeks soft, and Acai Berry for her, chosen for its bright package. I wrote an essay for university about Saint Constance. My sister hummed to herself and fell asleep. Every now and then, we accidentally frightened each other with our paper-clad faces.

The next morning, the six of us hiked around Franz Josef Glacier. There were great slabs of rock with edges so sharp and surfaces so flat that Mum said it was as though a bulldozer had crashed through them. They gave way to a milky river, the water on the blue side of gray-white, like cold eggshell. I wanted to wash my face in it; I wondered what its pH balance was. We wound our way up to the glacier at the head of the valley. It was twenty square kilometers at the top and contained, in any case, hues of blue, squares and thin sly rectangles of light. My family watched for a little while, our skin smooth and shining in the beam of the glacier, and then we walked back home.

*Mikaella Clements is an Australian writer who lives in Berlin. Find her online at (1).*