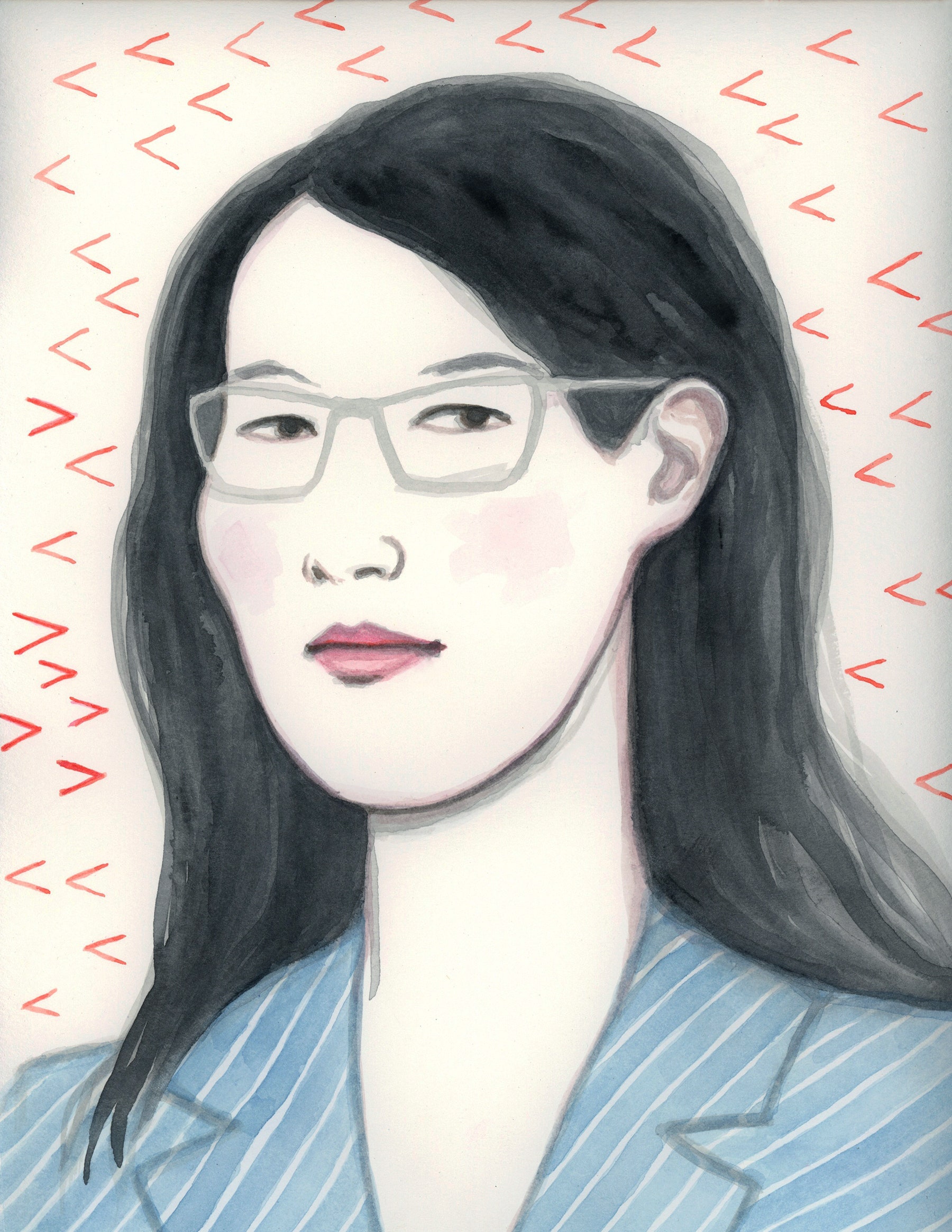 I grew up believing the world is a meritocracy. It’s how I was raised, and it made sense for a long time. My parents grew up in China, and they studied hard to get scholarships to graduate schools in the United States, where they got solid, stable jobs, worked with smart people, and started the cycle again with us kids. We studied hard, got into good schools, studied harder, got into graduate schools, worked hard, did a great job, and expected to be valued for it eventually.

This belief sustained me, mostly, through my early 20s. That was 20 years ago, when I saw my prospects as awesome and full of possibilities. I was fresh out of Harvard Law School, and my classmates and I thought we could do anything we set our minds to do. I believed in the system, because it seemed to work, and frankly it was just so easy to believe — it was so much easier than the alternative. I was doing well, and I saw other women, including women of color, succeeding. Great law schools were admitting us, top law firms were recruiting us, and we were earning substantial salaries. The most likely person to be promoted to partner at my law firm was an African-American woman. Senior partners told us we were on track for fantastic careers.

As the system’s problems started revealing themselves, crack by crack, we worked around them. Yes, some professors had made it clear that they did not believe women or minorities were qualified to teach at HLS. But students protested, and people eventually seemed to listen. When one of the women lawyers at my law firm was sent home for wearing pants, many of us made a point to wear pants more often. All major law firms seemed to be organizing all-male events: steak dinners, professional sports games, strip-club outings, and probably more. We didn’t complain about it, because it seemed an unchangeable part of law. Instead, we organized our own co-ed steak dinners, I persuaded my office neighbor to get me an invite to the Rangers games — and we just worked even harder.

Some things were harder to rationalize. One woman a few years ahead of me warned me about certain partners when she left, including the creepy senior partner who stood outside her office every day at 1 p.m., staring at her while eating ice cream until she started closing her office door (which, ironically, gave her the reputation of being distant). I considered these events anomalies and tried to avoid them.

Eventually, there comes a point where you can’t just rally and explain away all the behavior as creepy exceptions or pin the blame on yourself. And the glimmers of achievement are too few and far between. You see patterns, systemic problems, and it doesn’t matter where you are or what industry you pursue. After a few years at the law firm, I switched to tech. I’ve seen the same issues over the past 17 years, first in companies, then as a venture capitalist, and most recently as the CEO of Reddit.

I had a harder time rationalizing discrimination in tech than I had in law. The tech industry had even fewer people who looked like me; several start-ups had no women or minorities in management and engineering. I was older and starting to recognize more problems — problems that couldn’t be worked around or rationalized. It was hard to be a chill girl and bypass the obstacles facing the few women working in venture capital. Most VC firms had, at most, one woman on the investing team, and she sat at the bottom of the hierarchy. Key industry events had (4) — and I soon realized these institutions were using the same methods to build management teams and boards of directors and to invest in co-founders who are the next generation of wealth, power, and leadership. Unfortunately, some people just don’t treat men and women, whites and minorities, heterosexuals and LGBTQs as equals. We could all work harder and better than everyone else, but we weren’t getting a fair shot to rise to the top.

In VC, I saw inconsistencies in what people said and what they actually did. I saw many firms talking meritocracy but ignoring great opportunities that women brought in or giving men credit for them. I saw the bar for promotion move as soon as a woman crossed it. I saw inconsistencies in how aggressiveness and strong opinions were rewarded across genders. I heard stories about harassment and off-color jokes and sexist/ageist/racist conversations. Women founders were pushed out or into lesser roles as a condition for investment, while similarly inexperienced male founders were given the benefit of the doubt and supported. And a crowning indignity was listening to a group of men from work talk about porn stars, sex shows, the Playboy mansion, and sexual-partner preferences — and then hearing them discount a talented woman CEO by saying she was only valuable as a board member because she was “hot.”

What I’ve told you so far might be discouraging. But we have really made some meaningful progress. The biggest positive difference over the past 20 years is how women and minorities are sharing others’ bad behavior, data, and their own experiences publicly. You can’t get away with making thoughtless remarks anymore; someone is there with a camera or (5) to post it online, (6). When I thought about suing a high-powered VC firm, I was able to find and connect with women who sued financial firms to seek their advice and benefit from their support. They warned me about what to expect and told me how important litigation is, despite its imperfections.

Public data show how unrepresentative the tech industry is. One engineer (7), and others followed. The resulting (8) that women and minorities still form a small fraction of employees and a smaller fraction of leaders. Academics studying venture capital found even lower percentages of female partners in VC firms compared with tech and (1).

This research is breaking down the old rationales. Meritocracy defenders say there weren’t enough of us in school or looking for this kind of work — otherwise known as “the pipeline problem.” Actually, it’s about how the system treats people before and after they enter tech. A professor found that 20 percent of engineering graduates were women, yet fewer than 11 percent of engineers in the workforce are women — and (2) pointed to an uncivil work climate and the lack of advancement opportunities and role models as the reasons why. Other studies showed that while women make up over 40 percent of the lower levels of science, technology, and engineering jobs, more than half of them leave these fields over time. A primary reason cited was sexual harassment: sixty-three percent of women in these fields had experienced some form of it.

> Studies showed that while women make up over 40 percent of the lower levels of science, technology, and engineering jobs, more than half of them leave these fields over time. A primary reason cited was sexual harassment: sixty-three percent of women in these fields had experienced some form of it.

Those who stay face other barriers. An ex–Google employee found (3). A Fortune reporter researched and (3).

Tech and VC leaders argue that they aren’t doing it on purpose — it’s “unconscious” bias. Well, now that you are talking about it, it’s not unconscious. At this point, we’ve heard enough excuses. Know that when people use dog whistles like “the pipeline problem,” they are saying: we haven’t done anything wrong, and we don’t care to fix it.

My point is this: while the world is slowly getting better, it is not a meritocracy, and some places and people will treat you worse than others. When you are thinking about a school, job, or role somewhere, and it doesn’t look right to you, trust your gut. You’ll hear all kinds of defenses, but if they really want women and minorities as employees and leaders, why aren’t their numbers higher? Either they don’t really want them or they are incompetent. You shouldn’t work for them either way. If you have the option, run.

If you can’t run, go in with your eyes open. Just understand and know what you are dealing with. Accept the problems with the system and with your coworkers.

The two things that can really help are:

The main way I protected myself was filtering the helpful from the unhelpful. Rape threats, death threats, and insults are unhelpful. Being told to smile more, gain or lose weight, or give up on an important value and activity — unhelpful. Specific feedback based on actual events that could shape my thinking and course of action — helpful.

The specific feedback was rare but could be unbelievably powerful. One stranger wrote to me during the hardest part of the trial: “All positive comments we receive we deflect like Teflon while negative comments we hang on to like Velcro.” We need to do the opposite. Hold the good stuff tight and close to your heart, and let the negative slide off like you’re Teflon.

2. Speak up. Don’t be silent. Sharing my story privately, and eventually publicly, meant a lot to me and to others. Women and men are talking about gender and discrimination issues across the globe. When I shared my experiences with another woman investor, she described her own story of harassment. She hadn’t shared it with anyone — including her husband — because she felt ashamed that she might have invited it. Another friend pointed out that his mom had been moved to a broom-closet-sized office upon being promoted; a third said she had been written out of the history of a successful company’s founding. Strangers shared their woes and thanked me for publicly announcing what they found too painful or risky to share themselves.

> One stranger wrote to me during the hardest part of the trial: “All positive comments we receive we deflect like Teflon while negative comments we hang on to like Velcro.” We need to do the opposite. Hold the good stuff tight and close to your heart, and let the negative slide off like you’re Teflon.

Twenty years from now, when my daughter is in her 20s, I know her experiences will be even better than mine and than yours. They’ll still be worse for her than for many others, but the stories and data will continue to flow, and people will continue calling out those in power on their excuses and inertia.

For now, what I’d tell any woman struggling in a male-dominated work culture is: do not give up. You are not alone. There are millions of women and men who are supporting you and want you to succeed. Many people will try to blame you — for some, it’s just too hard to acknowledge their own failings and the failings of our system. That’s on them, not on you.

I wish I had known 20 years ago what I know now. I might have been kinder to myself. (I suspect, though, that if 25-year-old me read what I’ve written here, she wouldn’t have believed it.) And I wish I had known that — despite all the doubt I had in deciding whether to share my story and whether to take risks to help others — it was totally worth it. It has felt more empowering and rewarding, and it’s led to more friendships and genuine support, than I could ever have imagined.

*Ellen K. Pao is a tech investor, adviser, and writer. She was the interim CEO of Reddit and a partner at Kleiner Perkins Caufield & Byers. She is contemplating writing a book.*