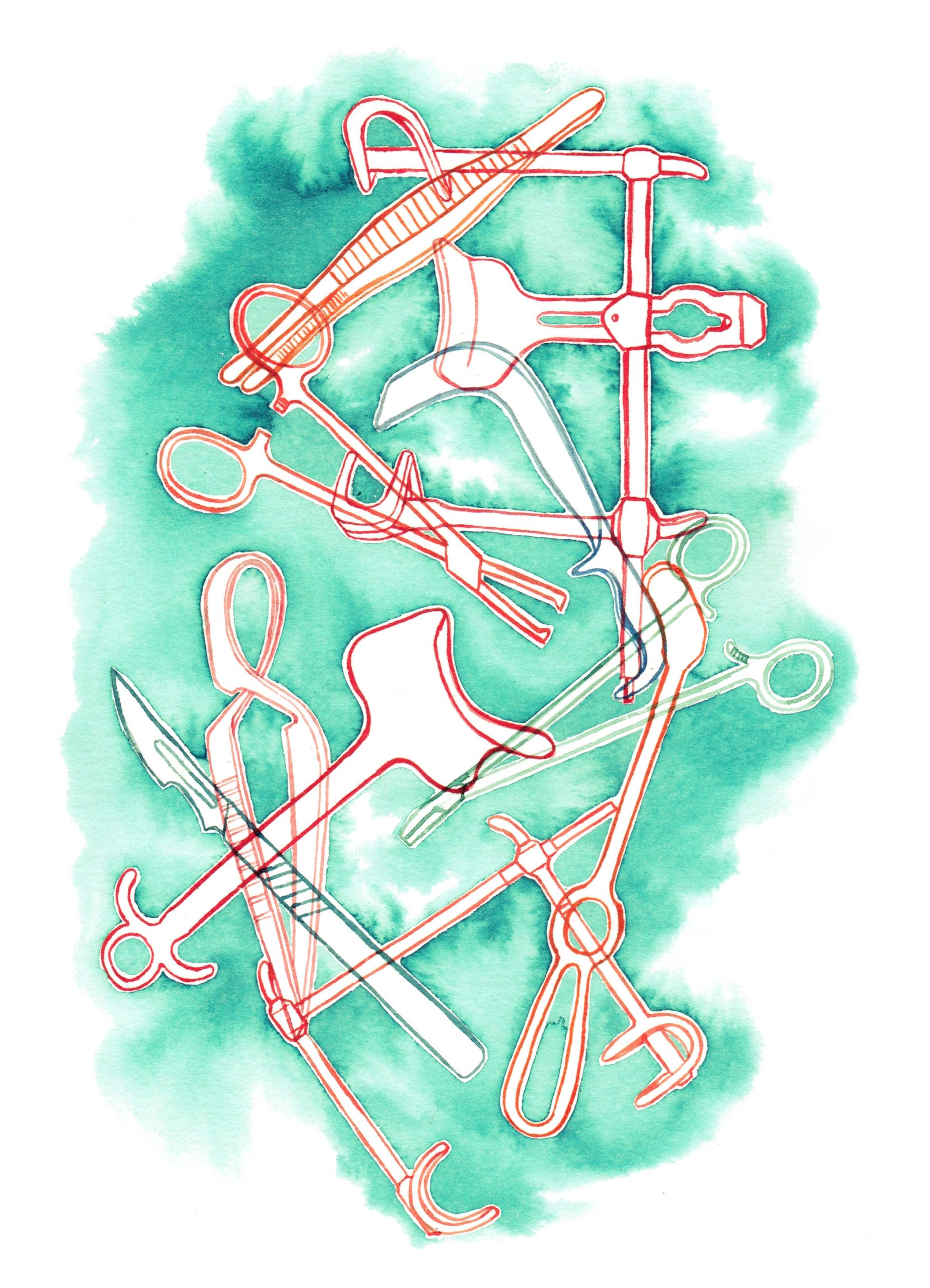 ​A couple of weeks ago, I decided to invite a few friends out for cocktails to toast to my last period.

It’s not often when a 38-year-old woman knows when she will have her last period. I do because I am having a hysterectomy this month. To celebrate my final menses struck me as having the potential to be wonderful and weird. Or just weird. I worried the women I invited would come only because they felt obligated. I worry about being a burden to my friends a lot these days, because I am often blue and hardly recognize myself. I broke down crying the last time I had dinner out with two of these women, because everything I had been through flooded me at once, and it was unbearable.

Though I might not look it, I am frail and fatigued after my ten-year fight to save my uterus. My diagnosis is endometriosis and adenomyosis, two similar but separate diseases that have the same side effect: I bleed too much and sometimes for weeks and months at a time.

My original diagnosis, stage-IV endometriosis, causes heavy bleeding and unbearable pain. I have severe anemia from the blood loss and need iron infusions because oral supplementation doesn’t help. A few years ago, I gave up 20 years of dedicated vegetarianism for the iron in meat. I often feel depressed by the choices I have to make.

This will be my third surgery for endometriosis in eight years. The idea of another surgery, even if it finally improves my quality of life, has filled me with depression and dread, which is why I needed to try to change my attitude about it. I titled the subject line of the email “Witchy cocktails?” and hesitantly wrote:

*Hi friends!
I had this somewhat strange but somewhat soothing idea the other night that it would be nice to meet up in the next couple weeks for a drink (a final drink too, because I’m not really supposed to be drinking) with close girlfriends, and toast to positive outcomes and actually, to my last period ever, which is just a couple of weeks away. A good-bye and good riddance of sorts. A sending away. A harnessing of witchy power and reclaiming of good health. This is beyond my typical tolerance of New Age-y-ness, and yet I think it could be a healthy and energizing thing to do. And hopefully fun.*

In the postscript, I implored, “Please tell me if this is a terrible idea.”

Almost all who I invited said they would come. Of course, of course, they said.

This past May, I went to a friend’s birthday party at a pub, then abruptly had to leave because I felt myself begin to bleed uncontrollably. By the time I walked a few steps to my car, I was covered in blood from the waist down. By the time I drove myself five minutes across my neighborhood and parked, I was sitting in a pool of my own blood.

At that point, I had been bleeding every day for over six weeks, and I would go on bleeding for several more. It added up to over 90 days of heavy blood loss. It was a side effect of the IUD that was meant to control the familiar, heavy, and unmanageable periods that had returned since I had my son in January 2014. My doctors all told me to give the IUD six months. *I won’t last six months like this*, I said. Even with the daily bleeding, this hemorrhage was something different altogether.

I didn’t do the thing I probably should have done, which was pull over when I passed the emergency room, because I had long stopped believing there was anything besides surgery that could help me. Surgeries are the only things that have helped, though they helped only temporarily.

> I didn’t do the thing I probably should have done, which was pull over when I passed the emergency room, because I had long stopped believing there was anything besides surgery that could help me.

Instead, I walked into my apartment and told my husband through tears that I was having the largest hemorrhage I’d ever had, and that I was going to get in the bath and clean myself up.

Once I was in the tub, I tried to flush out more clots, and blood continued to rush out in amorphous shapes in the tub. I saw them as red sea horses. Red seaweed. Red sea anemones. The shapes began to flatten and thin, dyeing the water horror-movie red. It struck me suddenly that submerging myself in water might be assisting my period in killing me. I got out of the tub.

Later, I would scrub layers of dried blood off the car seat. I threw away the brand-new skirt I had worn. My doctor told me if I had called her that night, she would have sent me to the emergency room. What would they have done for me? I asked. Monitored you, she said.

That Monday, I made an appointment with my gynecological surgeon, the doctor who has operated on me twice in the past eight years to remove endometrial implants growing on my other organs. These surgeries were to restore as much normal menstrual function as possible and assist in my ability to get pregnant. I told her office assistant I wanted to come in for a consult for a hysterectomy. When I got to her office, she gave me an ultrasound and discovered the IUD was missing. After going for every imaginable scan available to locate it, we decided it had expunged itself. That might have been why I was bleeding half to death.

Here is my memory of a scene from the film *Tom & Viv*, a biopic about the fraught marriage between T.S. Eliot and Vivienne Haigh-Wood Eliot that I was riveted by but haven’t seen since I was 17:

T.S. Eliot pulls back his newlywed bed covers and discovers the sheets are stained from Vivienne’s period. He stumbles back in horror and fumes. She hastily, frenetically collects them and tells him she’ll take care of it. Eliot, repressed and stuffed up like a piece of Victorian taxidermy, yells, **Yes, she’d better take care of it!* He treats her as if she has committed an act of purposeful domestic terrorism. He is temporarily a madman, but it is Vivienne who unravels throughout the movie.

I have slept on brown sheets ever since getting married at 23. I do this so I don’t have to be reminded of what I am not in control of. Every month when I bleed through to my sheets, I think of Vivienne and her stained white sheets. I am exhausted of the brown sheets.

Vivienne was ostracized for her health problems. I relate. I don’t know what to talk to people about anymore. What can I say? That my time is taken up by two things, mothering and bleeding? Everything else is distant to me: my writing, my work, my ambition, my love of reading, all have been trampled on by this disease. I fit everything else I do in the pauses and never feel like I am doing a good job with anything. With the exception of having a beautiful, healthy baby boy, the entirety of my 30s feels like a lost battle. I’ve given up job opportunities, writing assignments, a book, my website, all to barely manage pain. I was told after having a baby my condition might improve, and that gave me hope. But it has worsened. I am told frequently by others that my son is worth all the loss. *But look*, they say, *you have your son.*

I do have him. And he is the moon and the stars, but he is not all my dreams.

After I scheduled the toast to my period, I wondered if it was a birthday or a funeral. Then I realized it was both.

I did the math and discovered my period is 25 years old. On my way to the bar, I walked to a bakery and bought a red-velvet cake, then I walked to a gift shop and bought these things: a number-two candle and a number-five candle, a magic wand, bags of confetti, a large flip-top Mason jar, sparklers, and pieces of tissue paper rolled into a tube marketed as “wish paper.” I bought six red pens for my friends to write wishes on. I bought a thank-you card with a unicorn on it.

We assembled at an upscale craft-cocktail bar and I ordered a Dark and Stormy. Earlier in the day, my period had started. I was in pain, but I was happy for the fortune of it showing up on the day I was saying good-bye to it. I never know when it will arrive.

Earlier that day, I had run into my midwife, who had guided me through a difficult pregnancy and 44-hour labor with nearly every intervention necessary. How strange it was to see her on the first day of my period, on the night I was toasting good-bye to it. My son was with me, and she doted on him. I told her about the hysterectomy, and she was concerned. She had hoped for me that I would have more children. I was certain I wanted only one child, until I had a child. And then I realized that babies can make you want more of them as soon as they show signs of growing out of their babyness. In order to have another child, I would have to take extraordinary measures, and it is not clear that I could get pregnant anyway. I am too exhausted by extraordinary measures.

My first friend to arrive to the bar brought me a gift of a small booklet titled “Witches, Midwives, and Nurses.” I thought about how strange it was she brought me this book on the only day in the past year I had run into my midwife.

Then we drank and did store-bought magic. I made jokes about having a coven. I was relieved I cried only when I thanked them for being there for me, for being generous. I asked them to write wishes for me on pieces of paper, wishes for my last period and my surgery and for positive outcomes and a new life. I encouraged them to write wishes for themselves, too. I didn’t read the wishes. We followed instructions on the wish paper and set wishes on fire into the air. We locked the ashes in the jar with the confetti and the pens and the debris of the magic-making. At the end of the night, my friend waved the wand over the jar and over my body and said an impromptu spell.

We put sparklers on the cake. And the candles marking 25 years of womanhood. The sparklers made the room turn around; people thought it was my birthday. We cut into the blood-red cake and ate all of it.

We said good night. I took my jar of magic home. In the morning, I found my son had gotten into it and taken a red pen and scribbled on the inside of the unicorn thank-you card. I put it back in the jar. His drawing was better than anything I was going to say. I am going to put more in the jar, remnants of my menstrual life, some of my placenta, which I encapsulated and ingested after giving birth, and a piece of my brown sheets.

And then I am going to bury it in my little backyard and start to believe that my life will be different.

Good-bye, uterus. Thanks for giving me my son. Good riddance.