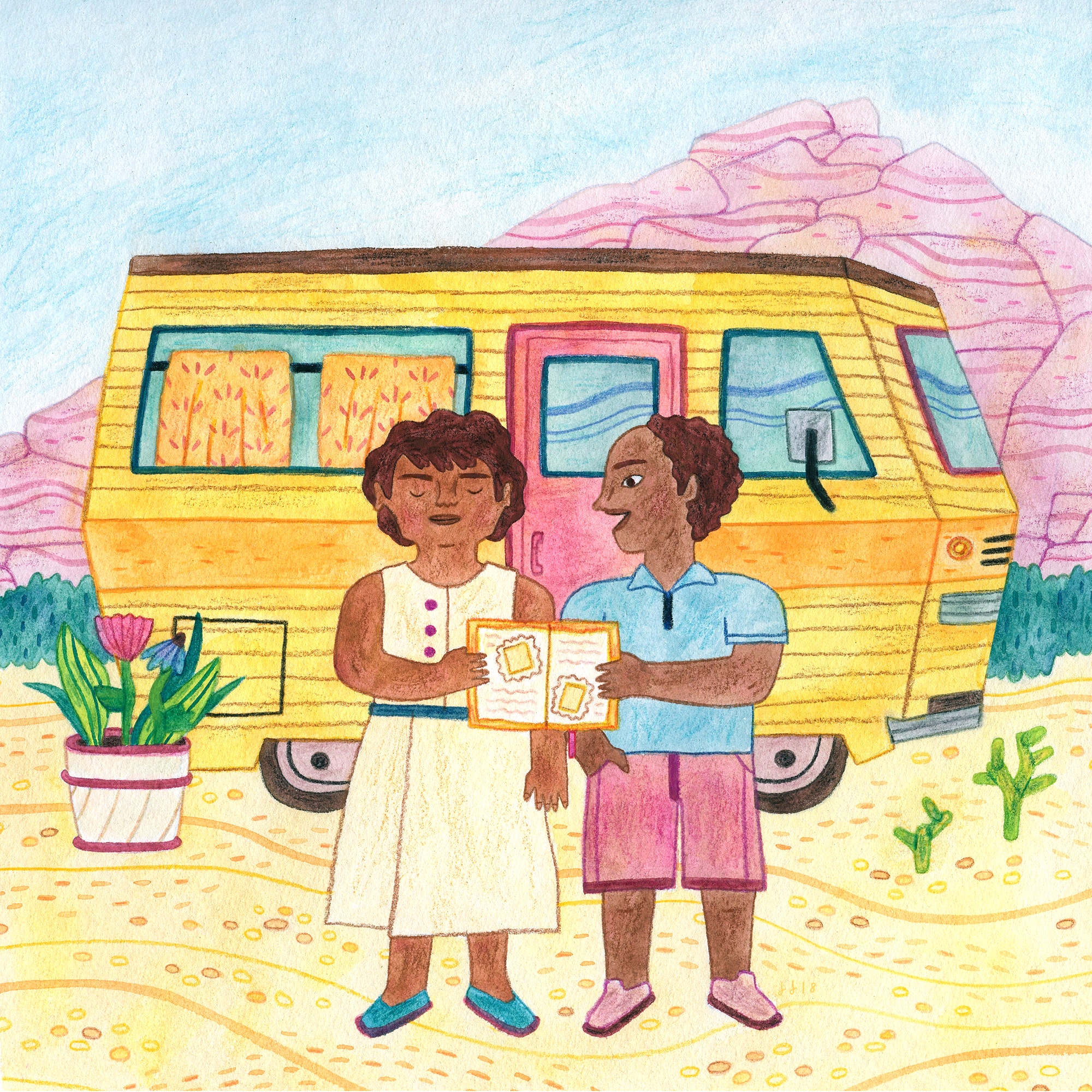 Many of you may have never heard of the publication the * (2)*, created by Victor H. Green, an African American postal worker from Harlem. Published from 1936 to 1967, the guide listed specific cities, entertainment venues, accommodations, and other businesses that were known to be tolerant of and welcoming to African American travelers. It was a game changer in the Jim Crow era, providing African Americans with a new sense of security when blatantly racially motivated and violent laws and the advent of “sundown towns” had made it dangerous for them to travel.

But the Green Book was not the only guide. Another African American postal worker, this one from Baltimore, started his own log in 1965. Instead of creating something for others to use out of concern for their embarrassment and safety, he was documenting his family’s travels through the 48 contiguous states. This man was my grandfather, and he and his wife (although very aware of the effects of racism) took no apparent notice of what was simmering in the United States the week they decided to pack up their three daughters and hitch a trailer to their car. The day they left, August 10, 1965, fell during the week that the Civil Rights Voting Act was signed and the Watts riots erupted.

Yes, my grandparents, Benjamin and Frances Graham, had a trailer in 1965. But the notion of them as African Americans owning a trailer and traveling across the United States in it was never unusual to me. By the time I showed up on the scene, in 1976, they were on their third trailer, and that always seemed quite normal. I had an amazing childhood, partially thanks to my grandparents’ wanderlust. As kids, my sister, my cousin, and I would spend the hot, lazy summer days “up the country,” running wild at a campsite in West Virginia. This is where I became enamored with the outdoors, as I was allowed to fuel my sticky, roasted-marshmallow dreams gazing at the entire universe above, dotted with infinite stars. I grew up seeing pennants from the many places my grandparents had traveled by trailer. They had slideshows and Polaroids that documented their adventures across the United States. When I grew up, my parents purchased their own trailer, and now they too have made some pretty epic trips across the country, racking up a long list of places visited. I thought that’s what most African American families did.

But I realized while working on a documentary about my grandparents that African Americans traveling by trailer or any other type of recreational vehicle (RV) still isn’t common at all. In fact, it’s about as rare as seeing Oprah pumping her own gasoline. There are some African Americans traveling by RV, but you really have to be in the right place at the right time to witness it. And in general, I don’t see that many people of color exploring the outdoors. Already aware of this lack of diversity from my personal experience traveling, I became hyperaware of it while traveling to many different states and parks for the documentary, where, on each trip, I could count on two hands the number of African American travelers I had seen, total. There were a few exceptions, but only in hot spots like Mt. Rushmore National Memorial. I became invested in understanding the underlying sociological reasons for the low number of African Americans spending time in the outdoors or traveling by RV.

This realization made me extremely curious about my grandparents. Only a year before their travels, the Civil Rights Act of 1964 had been signed, making it unlawful to discriminate or segregate in public spaces, including parks and other outdoor locations. And though these civil-rights laws were created and enforced, they also fueled racial tensions that would manifest in different ways, including race riots in some of the cities my grandparents would eventually drive through. I wondered: What made my grandparents so different from their peers in the African American community at that time?

When I started interviewing my grandparents to get to the bottom of why they decided to traverse the country by trailer, I stumbled upon the travel log that my grandfather kept. For their 35 years, he had detailed entries for each trip that included the dates, a map with a hand-drawn route, and the amounts spent on gas, camping fees, and entertainment. When the ink dried on the last page of the travel log, in 2001, my grandparents had traveled 94,219.8 miles, and to all 48 contiguous states. That’s three and a half times the world’s equatorial circumference.

With the travel log in my hands, I knew that the answers I was searching for were not here in the pages but *out there*, beyond the map. I had to see firsthand what it was that kept calling my grandparents out to the road despite all the potential obstacles. In our interviews, I discovered that my grandparents were destined to explore: they had considered purchasing an airplane or a boat or cruising by cargo ship before they purchased a trailer by happenstance. Yet the more questions they answered, the more perplexed I became by their boldness. Besides knowing that their marriage was a solid foundation, and that they would fondly recollect shared experiences on the road, they didn’t give me much else to go on about their decision to travel other than it was an idea that they had.

Still, the one question that I asked several times was if they faced any racial discrimination on the road. Surprisingly, the answer was no — with two exceptions, both in Montana. One was when a gasoline attendant refused to acknowledge them, the other was when someone yelled the N-word out of a car window.

I honestly think that, if nothing else, their largely positive experience drove them to continue to travel. But I wanted to know if their travels had shaped who they became as individuals. Had the new experiences fortified their relationship? Has anything changed for African American travelers since 1965? Are there more people of color engaging with and enjoying the outdoors? Are there more African Americans traveling by RV than in the past?

So I decided to travel to each state and retrace their epic journey, to dive deeper into who they are and, ultimately, to determine who I am. It was also clear that my duty as their granddaughter was to complete their travel log by going to Alaska and Hawaii, the two states they were unable to visit. I wanted to see what it was about their travels that made them seem inseparable, and also discover what inspired them to throw caution to the wind as though they were the only two people in the world. Most important, I wanted to truly understand how the simple act of physically being in the predominantly white spaces of the outdoors broke barriers in a racially divided America.

*Carla Joelle Brown is a visual artist and filmmaker from Baltimore, Maryland. She is currently filming the documentary* Everyone But Two: The Life, Love, and Travel of Benjamin and Frances Graham. *As a result of her experiences on the road, she is collaborating with the podcaster Jen Cooper on a travel series exploring the changing landscape and culture of the United States. Learn more at (1).*