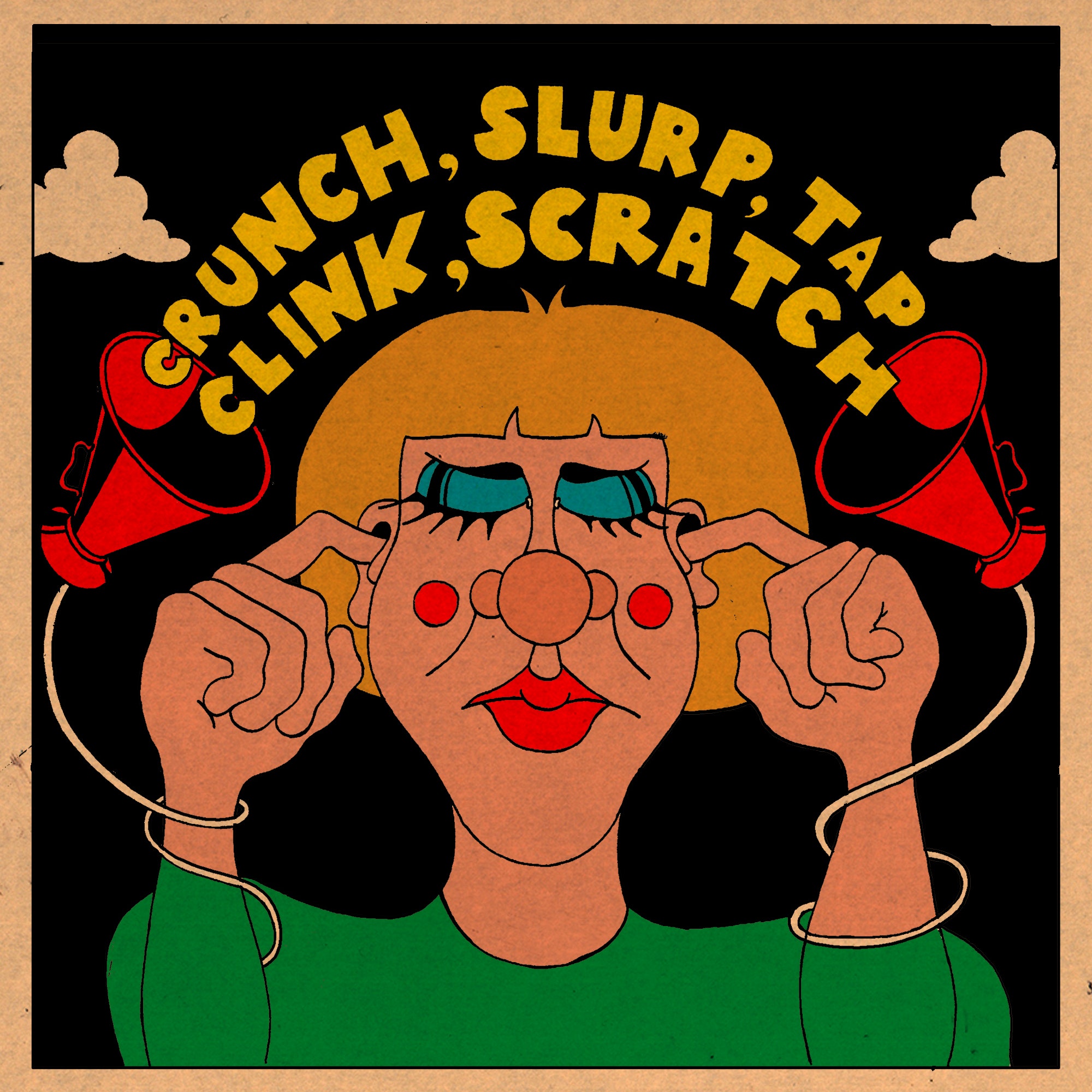 I’m in a spaceship. Wires taped on my face. On my fingers. On my ears. On my soul. I’m wearing a helmet that’s twice my size and I can’t move. Someone is driving. Someone is drilling. Someone is screaming. Someone is eating an apple. My shoulders are up to my ears. My face is just — making a face. Emotions. Someone burps. Eats cereals. My brain goes into overdrive. A tear rolls over my cheek, the drop full of mascara and hope. Hope that it’s over. Hope that I don’t have to hear more of this. I’m alone in a magnetically shielded room and, given the circumstances, I think I’m doing pretty good.

This is not a post-apocalyptic world, and I haven’t been abducted by aliens. I’m in a very real neuroimaging center on Queen Square, in London. In my very real reality of being a dysfunctional human being. Volunteering in a study led by one of the brilliant doctors who cared enough about my pretty-unknown and quite-rare disorder to prove it exists.

Until 2016, the name people gave to my disorder was *relou* (that’s “annoying” in French). I never really accepted that diagnostic. But there was no better one. So I considered myself relou. And I did for a very long time.

I’m six, maybe seven, when it starts. My brother is two years younger. I hate him. Not like siblings hate each other. I just really, truly, deeply, strongly hate him. (We’re good now.) I can’t explain why. I’m a child. I can’t explain anything yet. But I hate him. And there’s one thing he does that is unbearable. He clicks his tongue. Too often. For no apparent reason. He fucking clicks his tongue. (Sartre’s “Hell is other people” would have made a lot of sense to me then.) When my brother understands that he has the power to kill me on command, he decides to use it. He’s five years old. He’s dumb AF. And he’s my biggest threat. My parents can hardly punish him for clicking his tongue. So instead I get a lot of “Oh, come on” or “Grow up.” And my brother keeps tongue-clicking. Incessantly.

The more I grow up, the more trigger sounds I develop. There’s chewing, whistling, typing, and French kissing. But also crispy things, and watery noises. Burping. Snoring. Foot tapping. Candy being unwrapped. Beatboxing. Knuckles cracking. And nails — anything nails. Plus whispers. And even things that pop. Anything that pops. Stop popping stuff. The list is long like Shaquille O’Neal’s legs.

The more trigger sounds I have, the more hatred runs through my body. The larger the gap between me and the rest of the world, which doesn’t understand what’s wrong with me.

The more I grow up, the more I learn to live with my condition. The singers that come through my phone are my best friends (I’m still standing largely thanks to 1999 and 2002 Moby), and having a low-battery signal or losing my headphones is synonymous with tachycardia. I wear them pretty much all the time. At work. At home. In the street. I feel protected by them. Sometimes there’s no music on. They’re just there. In case. Ready to rescue me.

I dream of a life where I could wear earplugs all the time. That would do the trick. But it’s not recommended to wear them too often. I have to keep hearing sounds so I don’t become even more sensitive to them.

Asking people to stop making noises is unfortunately rarely an option. If I’m in a meeting and someone is clicking their pen or eating biscuits, I’ll discreetly cover my ears or try to leave as soon as possible. Like an animal under threat, somehow deprived of words and left only with the choice: fight or flight.

Once in a while, I dare suggest that we eat with our mouths closed. But this doesn’t help my popularity levels. So I just listen to the slurp slurps and clack clacks of the people I love for as long as my brain can handle it (which is not very long), and I retreat to the toilets. Sit there. Read a magazine. Look at the ceiling. Do nothing. Anything but hearing them. Until they’re done with their lovely family dinner.

I’m in a spaceship and my brain doesn’t get it right. There’s an abnormal functional connectivity between my anterior insular cortex and my frontal lobe, both involved in processing and regulating emotions. So when someone eats chips, whilst activity goes up in your anterior insular cortex and down in your frontal lobe, in my brain activity goes up in both, making sounds look like threats. Anxiety bombs. So I cry.

And then comes the passion — almost sacrificed on the altar of the enemy in me. I see between three and six plays a week, and I consider myself lucky that theatergoers mostly behave. But even though it’s not the popcorn-laden movies, it’s still rare that I can focus on a full play without being interrupted by someone’s loud sniffing or ice cubes clicking.

When the play is not that good, it’s fine. But we’re in London. So I’m seeing life-changing work. New classics. Jez Butterworth. Tony Kushner. David Hare. The play is always different, but the ending is always the same: me, queen of my very own drama — stomach in knots and drowning eyes — always this close to running away. However, there’s a strong visceral feeling that theater is the only thing I can’t give up on.

I have to be in a theater. So I choose fight.

One day, after too many clinking ice cubes, I applaud the cast of *The Seagull* and find my way out of the National Theatre. DJ Mehdi’s “Signatune” blasts through my headphones in a maybe unconscious attempt at going deaf by art. That night, I have the strength of someone who’s decided she’s not relou. I’m not driving home. I’m flying. Is it Anton Chekhov’s strength that carries me? Maybe. After all, many believe he suffered from the same syndrome, and he wrote countless masterpieces. Anything is possible.

At home, I open my laptop and type the phrases “can’t filter annoying sounds,” “annoyed by sounds,” “brain problem overreaction to sounds,” and so on. On the fourth page of my Google search, it’s there. What it is. There. In the meta-description of an obscure Russian website. It even has a name.

Forty-eight hours later, I’ve read everything that was ever written on misophonia. The articles. The studies. And the messages of hundreds of people suffering from the same condition. On forums. Blogs. Social media. Forty-eight hours later, I know that it’s not entirely my fault if every noise you make makes me flinch. It’s a brain dysfunction that distorts my reaction to pretty basic sounds into disproportionate emotional events.

I’m in a spaceship and I’m crying so hard that we’ll have to stop for today. The doctor says it’s not uncommon. Most people stop after two and a half modules. I’ve done two. I say I can do more. He says that too much distress may confound the results. He says I’ve done very well. Two modules is great. Six would have been better. But two is really good. So I dry my cheeks and peel the tape off my face. The wires fall. With them, all the rude people who made the sounds that angered me today.

The wonderful Carrie Fisher once said, “Take your broken heart, make it into art.” I’ve always lived by these words. And I’ve always made sure that whatever broken thing I have, I make something out of it. Something. Anything. Then it doesn’t feel so broken anymore.

This is for that day in the spaceship on Queen Square.

*Margot Noel is a freelancer who writes and finds ideas for advertising agencies, businesses, and, more importantly, the stage. She lives in North London.*