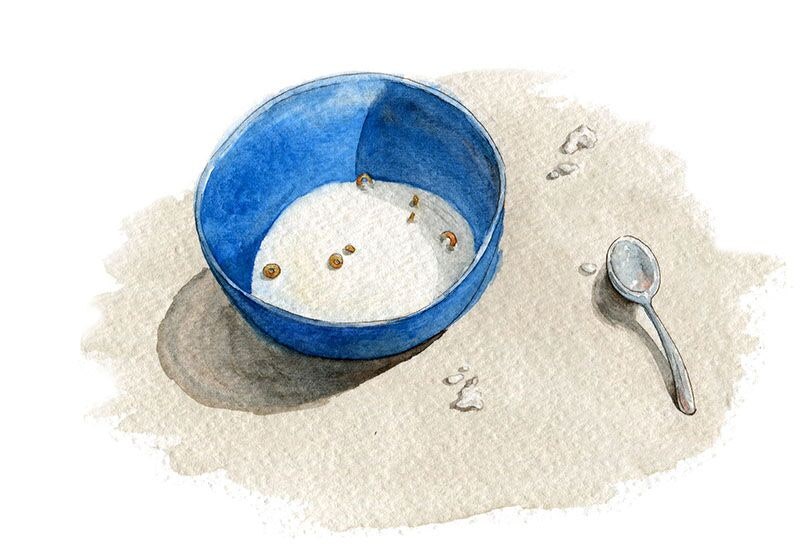 ​I was running to the tune of Edvard Grieg’s “In the Hall of the Mountain King,” slipping on giant playing cards — aces, spades, diamonds, hearts, slick and flat like bodyboards — running faster and faster as the music grew louder. There was joy in this running, such abandon; the cards flying behind me in white, red, and black, my feet flying too. I was going to win this race, whatever this race was, and then I heard the gentle plink-plonking of the “crystal drops” setting of my iPhone alarm clock, and grief punched me right between the eyes: I was back in my real life. I was on my sister’s couch, not in my bed, and I had 20 minutes to get home to have breakfast with my son.

My ex and I are separating, and we’re sleeping on people’s couches as we try to decide what to do with the househome that was ours for the past six years.

“Where were you, Mommy?” says my son.

“Just at my sister’s. I’m here now.” The hurt is a vise around my throat, though tears never materialize because I’m a big girl and he’s just a small boy.

One day I won’t be here at breakfast, I want to say to him. I don’t say that to him, not yet. But now, when I look at him, I often feel sorrow and guilt. He’s six, and he has no idea how much his life is about to change. And there’s nothing I can do about it.

When I was trying to figure out why I remained in my marriage, I would turn to the Internet to tell me why I should stay. I read silly articles about relationships: “Ten Signs You Should Break Up,” “Five Secrets to Long-term Coupledom,” “How to Fall in Love Again.”

I took quizzes: “Does Your Main Squeeze Truly Get You?” “Are You Happy in Your Love Life?”

I kept staying mainly because I couldn’t imagine not being around my son full-time. My ex and I were good parents, but not good partners. The Internet just spewed bullshit at me; it told me nothing about how to make things work.

Yet today, I still turn to the Internet, like it’s God, to tell me how to cope.

I type “dealing with split custody,” and I get a blog by a single mom who talks about winning sole custody (not that useful) and lots of other legal information, but that’s not what I’m asking the Internet. I’m asking about what to do with my aching love, what to do with cuddles that will itch to come out and there’s no warm, sticky boy body to receive them?

Finally, I find a forum for moms talking about the emotional aspects of shared custody, and it gives me very little hope. “Sometimes I just want to curl up in a ball and die because it hurts so bad,” one commenter wrote about her child. “I stare at her picture and I am overcome with terrible feelings of remorse and sadness.”

The other night, my son and I lay curled up on the couch, watching _Myth Busters._ He was eating slices of apples and pears, and I was falling asleep. I had a dream where my ex cut my son’s long, golden hair when I wasn’t around. My son’s hair is like Samson’s hair — he is proud of it, of his determination to not cut it. Despite being teased about it in school, despite the hair always falling into his eyes, it is his strength. It is part of his identity.

His hair has also been an argument between my ex and me before, more than once.

On waking, I thought how there will be that, too: those sorts of parenting disputes, my son caught between, maybe letters from lawyers, my son’s hair no longer just hair but a bargaining chip or a threat.

I am not yet in this hellish chapter of my new life where this will be reality. When I won’t see my son for a few nights in a row. When I will be running to his father’s house to drop off the favorite car toy or a jacket or his homework or whatever else my son forgot at my house.

I’ve heard from other parents who split up about that part of shared custody. I’ve heard about worse: the tantrums over the favorite car toy getting lost between houses, kids crying themselves to sleep, angry kids with their grades dropping, about kids blaming themselves for what happened.

For now, I’m still having breakfast with my son every morning. But not having him there during meals is something I await with as much dread as if I were about to have surgery to get half my heart removed.

After the first ultrasound, when my son was only dots and a heartbeat, I locked myself in the bathroom and sobbed because I finally believed he was real. I loved him right away; those dots like a map of stars that would make him into a human being soon. I would now have a family. I hoped we would be a good family. Better than the family I came from.

I’d always secretly wanted to have a family even though I’ve played a tough girl all my life and I’ve danced on speakers in napkin-sized sequined tops to hard-core Detroit techno like it was my job.

That was my life before: my ex and I dancing and kissing and fighting and making up, free-falling into each other without a net to catch us. We kept going — from apartment to apartment, from tears to laughter and sex that kept us coming back even when things were bad.

Seven years into our wild relationship, we had the baby. A boy who was carved out of me. And when I saw him — as the doctors were stapling me back together behind a green sheet — everything made sense. Down from my neck, my body felt like a corpse from the epidural and every other drug in the world, but I felt more alive than I’d ever felt before.

The next day, I woke up and saw my son’s tiny form in a little see-through box. He was covered in hair, like a monkey. He was mine. I was his. We would never be apart.

My ex bought a house for us. The first photograph of the house is of my son in a carrier, illuminated by the light coming from a small window, in a vast space that would be the dining room. The entire place was empty, but that little carrier was like a stamp that we were putting on our life of becoming a proper family.

The house filled with furniture; it filled with toys and kid’s books, and a kid who grew and grew and parents who also grew, but grew further apart from each other because their identities as a couple were too tied to life before the baby.

Six years later, my ex and I are sudden strangers. I have no idea who my ex is now; there’s too much pain and space between us.

The details of our breakup are not important. That is not what I grieve when I wake up after a night of fun dreams to find myself on my sister’s couch. I grieve the fact that I will be without my son half the time. That I might become the woman curling up in a ball, I don’t know, stroking my arms and pretending my hands are my son’s hands, his sticky small paws that always grab for me. Maybe I will even kiss my arms pretending it is his face. But my arms will never smell like him: spit, and sweetness, and warmth.

One of those gruesome Old Testament stories talks about the wise King Solomon (Kings 3:16–28) and two women showing up before him with a baby. The baby belongs to only one of the women, but they both claim ownership.

The king says, “Cut the baby in half! That way each of you can have part of him.”

“Please don’t kill my son,” one of the mothers screams. “Your Majesty, I love him very much, but give him to her. Just don’t kill him.”

She was the baby’s real mother, Solomon decided.

The story informs how I need to proceed with the heartbreak that is about to happen. I need my son whole, even though he will be, metaphorically, cut in half. In my darkest moments, I want to spend all my meager savings to fight for a bigger slice of custody, but this is not about me. He needs his father, no matter how I feel about his father or how I feel about the dream of having a family exploding in my face.

There is no way to stop an explosion.

And there’s no way that I won’t miss what I had dreamed up. A family. Right now, it feels that I might never recover from living with half a heart. That I might never get used to not having my son’s warm, sweaty, sweet body coiled into me, the way he used to be coiled inside me, both of us waiting to be together forever, inseparable.

_Jowita Bydlowska is the author of_ Drunk Mom _, a memoir about addiction; her next book,_ GUY _(a novel) comes out in fall 2016._