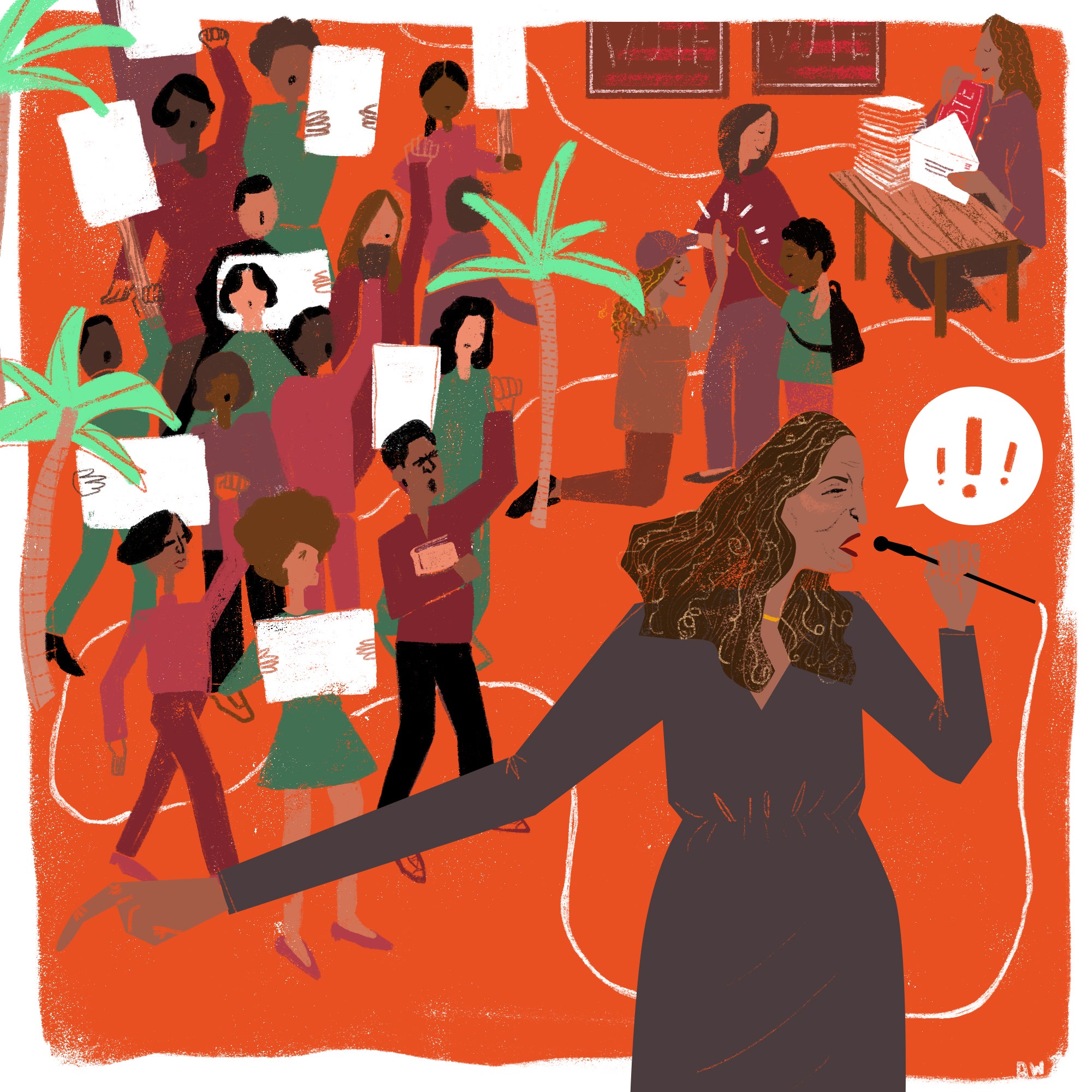 Over the past year, as I watched streams of women declare first-time candidacy, I felt inspired and hopeful, as well as apprehensive. On the one hand, I thought, *It’s about time.* And our time certainly is right now — we know that, at every level of elective office, there are (1) than ever before. People are fired up and civically engaged in unprecedented ways, and women deserve to lead.

On the other hand, as someone who’s had firsthand experience working on the ground for various political campaigns, including historic races for female candidates, I worried about the practical implications of some of the messages coming from newer organizations. While recruiting folks to run for the first time, some seemed to suggest: “Drop everything, and just do it!” I wondered if this was realistic, how we set up first-time candidates for success, and how we ensure they are meaningfully engaged with the communities they would serve. I wanted to know how candidates can best be prepared to endure the campaign trail, to address the significant impact that running for office can have on personal finances and family obligations, and how these challenges particularly impact women.

I also found myself more and more interested to explore the paths of the women who’ve come before us, the seasoned veterans who have paved the way for so many more women to just run. One such leader is California state senator Holly Mitchell. Before running for office, Senator Mitchell had a career in the public sector: she was a legislative aide and later spent seven years as the CEO of a nonprofit, Crystal Stairs, which focuses on improving the lives of families through quality early-childhood care and education.

When you talk about going deep and thoughtfully interacting with communities and issues, Senator Mitchell sets herself apart as both expert and advocate. As a state senator, she has been described by colleagues as “a (2) and social conscience of the entire Senate.” But she’s also known to be a budget wonk who understands not just balancing dollars and cents but, more important, the significant impact that funding cuts can have on nonprofits like Crystal Stairs. In fact, it was the experience of receiving budget cuts while her organization relied on state money that Senator Mitchell credits with influencing her run for office.

What follows is a conversation with Senator Mitchell about her path to the state legislature, lessons learned along the way, and how we should be thinking about expanding opportunities in politics for black women in particular.

**Meena Harris:** I want to know about your path to public service and how you were inspired to run for office. Did you always want to serve, or was it an interest that developed over time?

**Holly Mitchell:** I studied political science as an undergrad. I was in leadership in the Black Student Union on my high school and college campuses and naturally fell into those roles. My parents were both public servants. I worked on a couple of campaigns when I was really young. My parents had a friend who ran for Congress, and my mother took me along when she went to the campaign headquarters. I would be in the corner stuffing envelopes — that’s what you did in those days.

Fast-forward, I go through the Coral Foundation Fellowship and get an opportunity to work for State Senator Diane Watson in her district office. She was phenomenal in that she allowed me to identify the policy issues that I was interested in, which really has followed me throughout my career.

I later went to work in the nonprofit sector, working on behalf of underrepresented communities. One day, I was sitting in a budget subcommittee hearing as the CEO of Crystal Stairs. I had brought several busloads of women to Sacramento to talk about how critical subsidized child care was for them and their families, because the committee was considering major cuts to the program.

In that moment, I realized that committee alone could have a direct impact on millions of families and children — and not one of the committee members was from my county. I understood that someone just like me, with my experience and skill set, was the kind of person that needed to run for office.

**MH:** You’ve spoken about being a good “translator,” in terms of navigating back and forth between policy-making and your community. How has that played out in practice?

**HM:** I actually figured that out about myself when I was on staff. Senator Watson was a member of the same budget subcommittee that I chaired as state senator before I became the full budget-committee chair. During Senator Watson’s time, there were three guys who managed the whole budget process. They walked around the capitol like superheroes — crowds would part when they got off the elevator. Senator Watson said, “I want you to staff me in Sub Three, so you go to these briefings.” I’d go and sit, and I wouldn’t ask a question, because those three guys were there.

As I listened more and more, I thought, *They may know about numbers on a piece of paper, but for me, the state budget is not just a document that has to add up*. Sitting in those meetings and being quiet and afraid of those guys, I realized that the skill I had that they didn’t was knowing how those numbers impacted real lives. As they casually talked about “We could reduce this program by X percent,” I could see the faces of actual Californians who would be affected by that.

That’s where I found my own power and my own voice. That’s what gave me the courage in those meetings to actually raise my hand and say, “If you do that, Ms. Jones on 49th and Central won’t have enough food to get her through the end of the month.”

**MH:** Let’s talk about the lack of political representation for black women. What can and should we be doing to remedy this?

**HM:** We have to think broadly and more creatively about where we recruit women from. When I threw my hat in the ring, people knew me and would universally say, “She’s smart, and she runs a top-shop operation over there at Crystal Stairs. But wow, she’s running for office, huh?” I just wasn’t on that short list of former staff that fit the very narrow model of who they thought could run.

Shirley Weber is also a good example. She was a professor of Africana studies at San Diego State. She’d been on the school board but hadn’t expressed any interest in running. It took a woman, Toni Atkins, to go talk to her and convince her why she needed to run for public office.

We also have to be frank, because I don’t want to set women up for failure. They have to understand there’s no pension; they have to understand the reality of living in two places. I’m very open. I’m a mentor to a freshman assemblywoman who is a divorcée with two kids. We sat down and spent hours over coffee once she was elected, because she wanted to know, how are you doing this, how do you split your time? We have to have honest conversations about how we operationalize public life as women.

**MH:** What do you say to newer activists who at times might feel defeated? What advice do you have for people to continue to be engaged, especially in their local communities?

**HM:** I have always said when people ask, “Why do you want to run for office? Politics is dirty.” I say, “As women, as communities of color, as working-class folks, we don’t have the luxury not to be.” Every aspect of our lives is impacted, influenced, controlled by, touched by some political decision on some level of government. Everything, from the age at which we drive, to the mandate that we have insurance, to my ability as a black woman to be in certain public places with other people — those were decisions ultimately made by some elected body at some point in time. We learned in Flint, for instance, that political decisions determine the safety and purity of the water in your own home.

None of us have the luxury to not engage. It doesn’t mean that everybody has to run for office, but everyone has a responsibility, an obligation. Can you imagine if everybody just did something? How different our democracy would look?