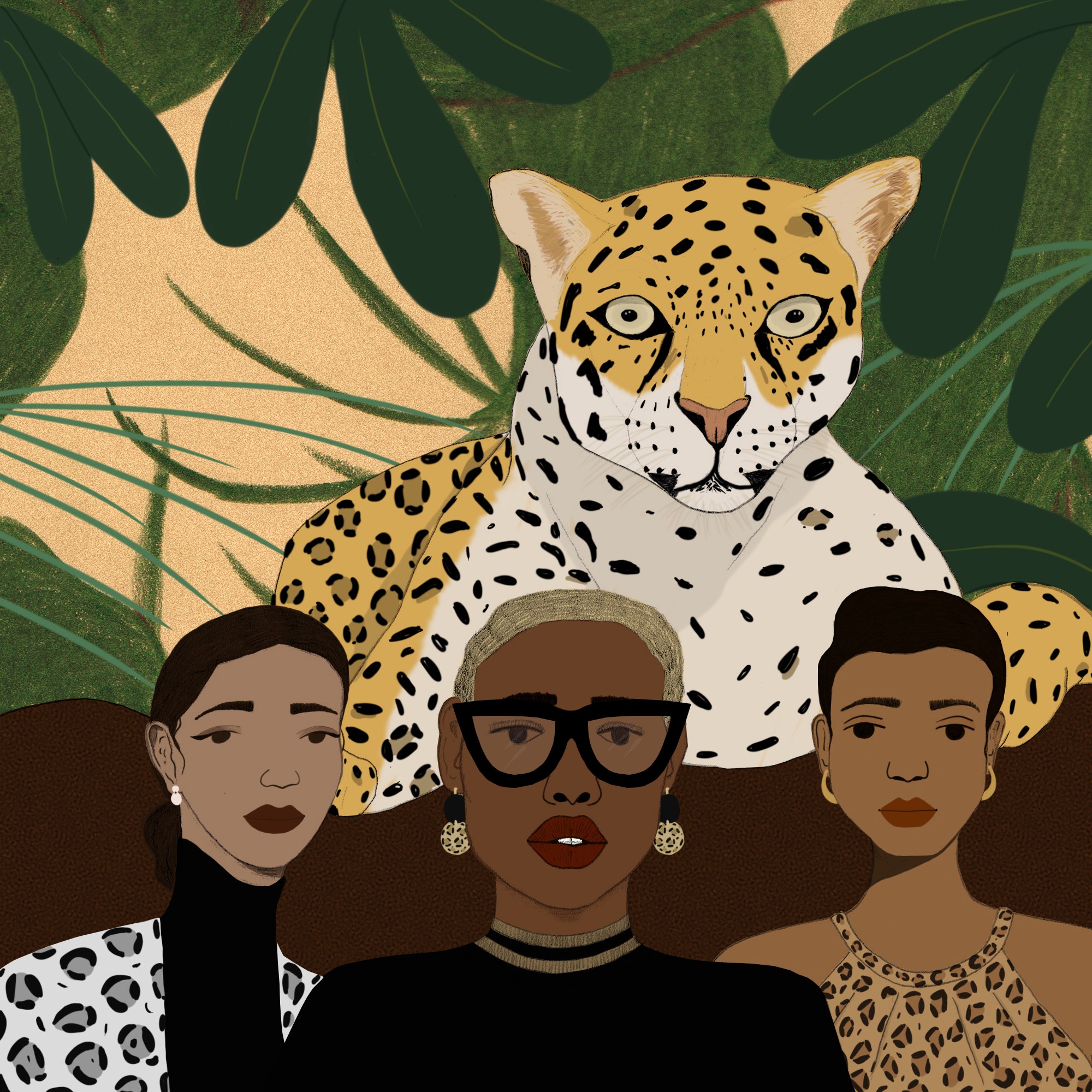 One of my favorite memories of wearing leopard print is from 1979, when seventeen-year-old me borrowed my mother’s leopard-print evening blouse, which I wore over a distressed black tank to a Ramones concert at the Agora in Atlanta. I fit right into the wildly dressed crowd because I stood out; people commented on it all night long, saying, “Hey, cat lady!” and “Meee-ow!” while making claw hands at me. At one point my boyfriend put the blouse on to dance to a single song, and everyone turned their attention to him. In moments he went from a grubby punk to a glam icon, and everyone loved it.

The shirt meant rebellion to me, gender-bending to my date (we were both bisexual, but it was dangerous to be out in the 1970s at our high school), and stylish sophistication to my rather conservative mother. How can one article of clothing mean so many different things to different people?

When I set out to write a book about leopard print, I thought a lot about this. Fashion is an evocative language, a set of cues we use to communicate status, gender, mood, and intention. When we choose to wear something, we are making a statement with it. An outfit can say that we are at work or at play, that we are rebellious or conservative, that we want to blend in or to stand out, that we care about fashion or that we don’t. Even a uniform makes a personal statement about us: that we’ve (voluntarily or involuntarily) forfeited the option of choosing our clothing.

So what does it mean when we choose to wear leopard print? I spoke to my friends, a motley crew of performers, professors, artists, writers, and home-keepers, as well as to a few strangers I met wearing it on the street.

Marion, who has run a music shop for over twenty years, said that it’s all about rock ’n’ roll. Waxie, a modern dancer and burlesque performer, bought a leopard faux-fur coat and said it took him months to get up the nerve to wear it, because to him the coat felt like a living thing he had to cohabit with and treat with respect. My accountant said he finds leopard print repulsive because it reminds him of Peggy Bundy and Fran Drescher on *The Nanny*. Pinup enthusiasts told me they associate it with bad-girl fashion, fuzzy dice in vintage cars, and mid-century décor. A stranger at a beignet shop in New Orleans said, “It doesn’t mean anything — I always wear it when I work out!” Another woman, who works with children who have been bullied, told me that she would have the children who had become withdrawn dress up in leopard print and roar to feel uninhibited, and that they loved it.

That’s quite a range of responses, and yet none is particularly surprising. Leopard print evokes something in our natures, as well as many aspects of our culture.

Historically and globally, wherever the cats are known, wearing their fur has been a statement of pride, power, status, and wealth. In Europe during the eighteenth century, animal prints became popular among the nobility and courtiers, partly under the influence of the fashion-forward young men of the time known as macaronis. The flamboyant macaronis had such an influence on the decadent style of the late eighteenth century that their taste for loud clothes, including pink and leopard print, influenced many of the ladies of the court, and there was a brief rage for the “femme sauvage” in extravagant spotted gowns.

The pattern assumed new significance in the early twentieth century. Actual leopard furs were popular with wealthy society women and eccentrics, and a lust for the exotic infused design in both dress and décor. Even surrealists were fond of leopard motifs. Flappers wore bigger and bigger coats over their increasingly skimpy dresses, in order to stay warm in open and unheated automobiles, and not only real leopard fur but the pattern of leopards printed onto other furs and velvets came into fashion. The print was found on silk as well, and made its way onto dresses.

In the 1930s, artificial fibers were developed and clothing became more accessible. Because textiles and garments were made by hand, self-expression through fashion had been restricted to those with resources to indulge. Now, with the mechanization of factories and the production of cheaper fabrics, everyone could afford to have a few novelty items. It was possible for more people than ever to try out something for fun, something not strictly functional, and leopard print was often the go-to.

The print was featured in Christian Dior’s 1947 landmark debut collection, on a slim-fitting sheath dress called “The Jungle.” Its place on the catwalk secured, the print became sophisticated and respected by the world of high fashion, as well as admired as a sign of decadence and eccentricity.

In the 1950s, it became a staple on lingerie and bikinis and was loved by rock stars, becoming the print of high energy and sexual playfulness. In the 1960s, this classic look retained its popularity, and it was also employed in youthful designs by experimental clothing designers such as Rudi Gernreich.

By the 1970s, the fur had been banned for trade, and the print had entered the fashion lexicon for good. It continued to accumulate meanings, and while it was still revered in high fashion, it came to be somewhat reviled in its cheaper forms as a sign of tawdriness. Swingers, drag queens, glam rockers (particularly men), and punk rockers (who had it painted into their mohawks) embraced its campy appeal, and by the 1980s, it was a staple on every mall-goer and a favorite on spandex, particularly for activewear.

In the 1990s, designers such as Gianni Versace and Azzedine Alaïa used the print to celebrate the feminine form, and a new wave of glorious supermodels made it irresistible. By the end of the twentieth century, a resurgence of retro fashion came up through the underground, influenced by rockabilly and lounge, and it was and still is a favorite of neo-pinups and neo-burlesque performers.

In this millennium, none of these connotations have been supplanted; they all have their place. Leopard print takes on the intentions of its wearer and her environment, and the past century of culture, more documented than any other in history, informs its meaning. Anyone can wear leopard print, and almost everyone does.

Scientists have coined the term “misattribution of arousal,” which means humans experience the same physical symptoms, such as pupil dilation and adrenaline rush, whether they see something they fear or something that attracts them. The leopard is truly dangerous to us one-on-one, yet always beautiful, too. It stands to reason that seeing its pattern excites us, too.

When we wear it, we feel playful, powerful, sexy, stylish, and any number of other things. I suspect on some level we are always identifying with the freedom, beauty, and adaptability of these spectacular creatures. Leopards live in the hottest deserts, the deepest jungles, and the iciest mountaintops. They can swim, they can run, they can sleep in trees. They are dangerous hunters and gentle mothers. These characteristics allow for their pattern to take many forms, and it explains how one shirt could read conservatively stylish on my middle-aged mother, playfully subversive on my teenage self, and glamorous on my boyfriend.

Chic or tacky, luxurious or cheap, banal or bold, it has proved to be a true contronym in the vocabulary of fashion. We wear it, it doesn’t wear us; we inhabit it and inform it.

To recall a lyric from the Ramones, leopard print really has it all.

*Jo Weldon is a burlesque instructor, fashion-history buff, and sex-workers’-rights advocate living in Brooklyn and the Hudson Valley. She runs the New York School of Burlesque. Her newest book,* (1) *(Harper Design, 2018), is available now.*